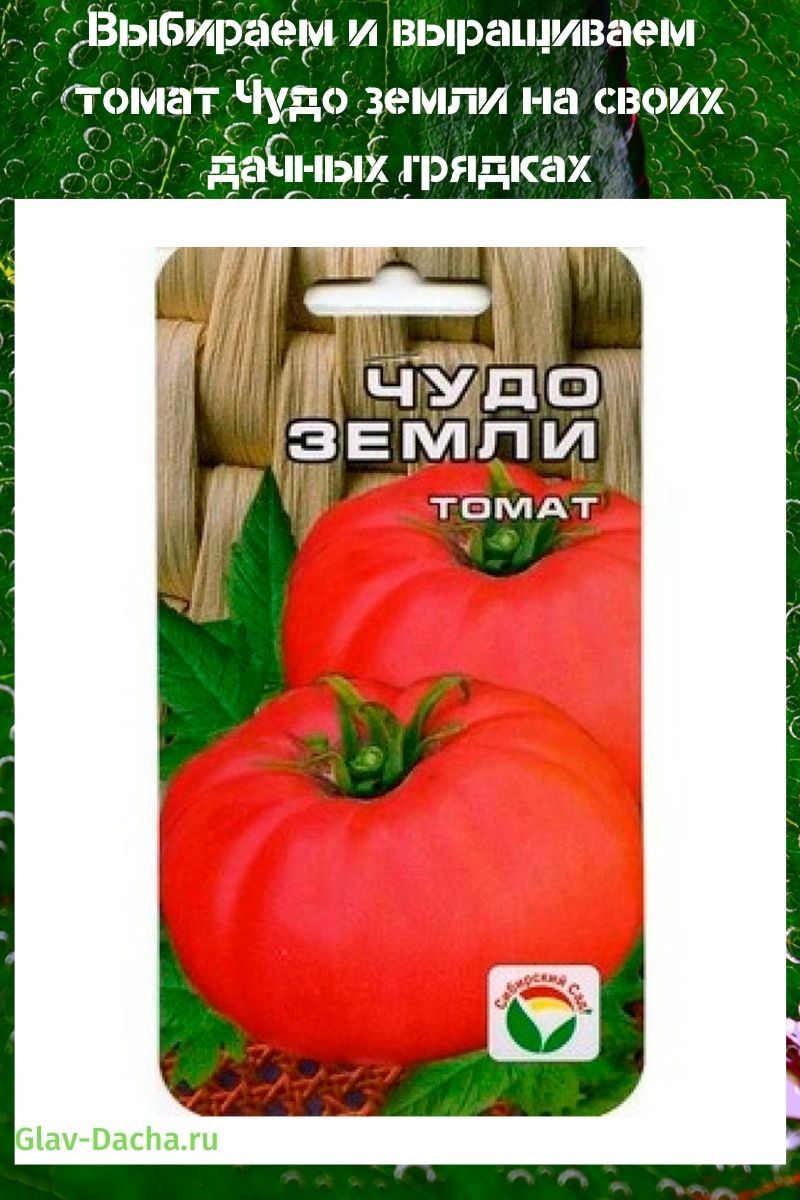 In 2002, an unusual tomato variety appeared on the market, which was bred by a breeder-entrepreneur from Novosibirsk. Later (2006), the Miracle of the Earth tomato was officially entered into the State Register of the country. Today, the crop is grown in garden beds and greenhouses with bountiful harvests. The seeds are freely sold at specialized retail outlets. And the growing method is available even for novice gardeners. 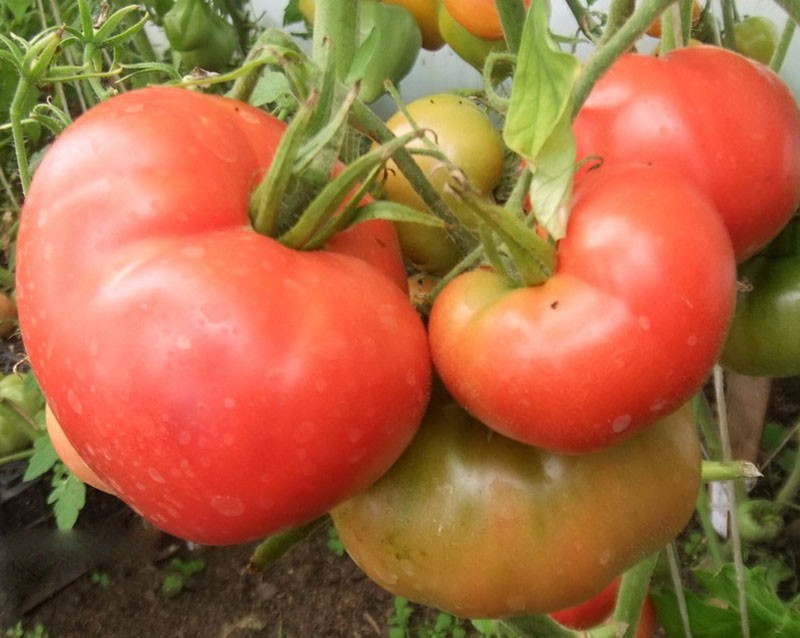 A detailed description of the variety and characteristics of the Miracle of the Earth tomato allows you to notice all its advantages. The plant wonderfully takes root almost throughout Europe. It usually takes about 100 days from the appearance of green shoots to the first fruits. Therefore, it is considered a medium-ripening culture..

Standard bushes form not very dense stems. As a rule, they need support. Under favorable conditions, the tops grow up to 2 m in height. In order for the plant to develop successfully and bear many fruits, only 2 strong shoots are left. The fork is formed just below the first inflorescence. The rest of the stepsons mercilessly remove.

The branches are abundantly covered with leafy dark green plates of medium size. During the flowering period, buds appear between them, from which fruits are formed. When ripe, they weigh about 400 g. However, there are also larger specimens reaching 1 kg.. 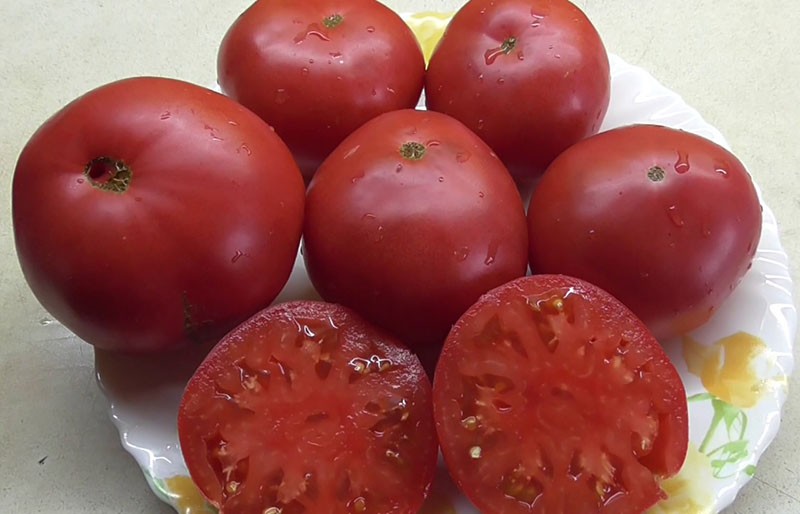 The fruits are covered with a thin but strong enough skin. The pulp contains up to 5% dry matter, including seeds. When fully ripe, they are used to grow crops. Tomatoes have an excellent sweet and sour taste. In cooking, they are used to prepare salads, juice, pasta or all kinds of sauces and dressings..

The fruits of the Miracle of the Earth tomato variety lose their properties during transportation and long-term storage..

On average, the yield of the Land Miracle tomato is approximately 15 kg per 1 m². On the territory of southern latitudes, up to 20 kg are harvested from the same site. And in cold regions, only 12 kg. The indicators are influenced by the culture’s resistance to temperature extremes and some diseases. For example, a plant “bypasses” late blight, which is considered the worst enemy of tomatoes..

Tomato Wonder of the earth: the advantages and disadvantages of the variety 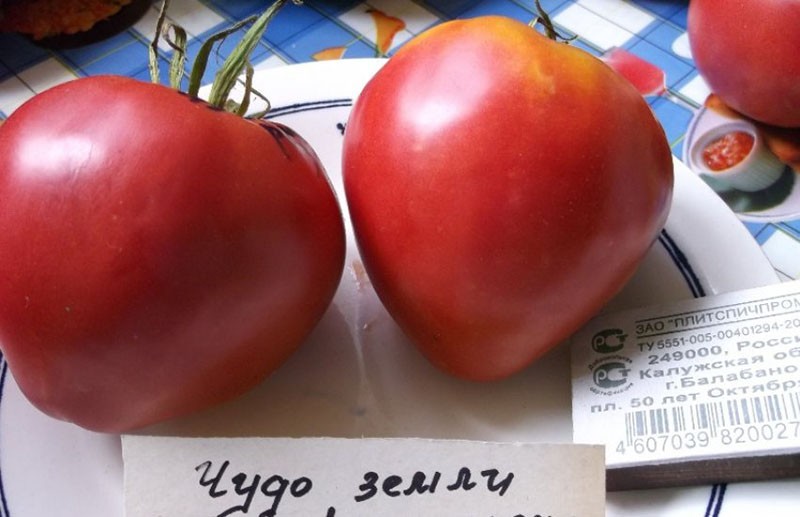 Growing a crop on their plots, gardeners have noticed many advantages of it.. 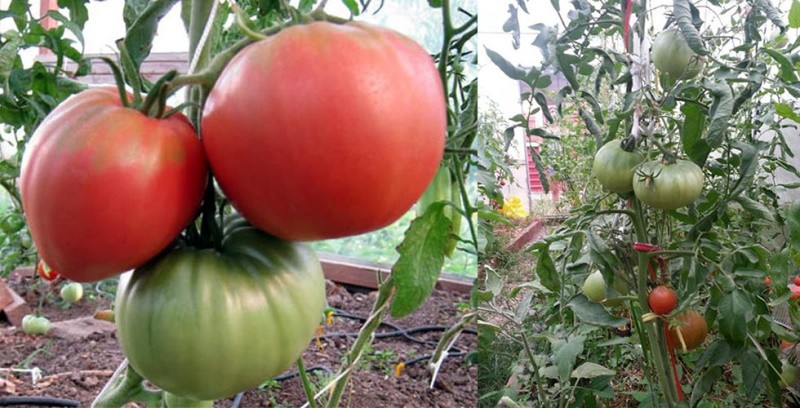 The disadvantage of the variety is the removal of stepchildren during the formation of bushes. Due to the weighty fruits, the plant needs reliable support. Usually it is made from wooden stakes or simple structures similar to trellises..

Unfortunately, there are fake Miracle of the Earth tomato seeds on the market that do not match the characteristics of the variety..

The culture takes root wonderfully both in the open field and in the greenhouse. Planting material is purchased in specialized stores to get an authentic variety.. 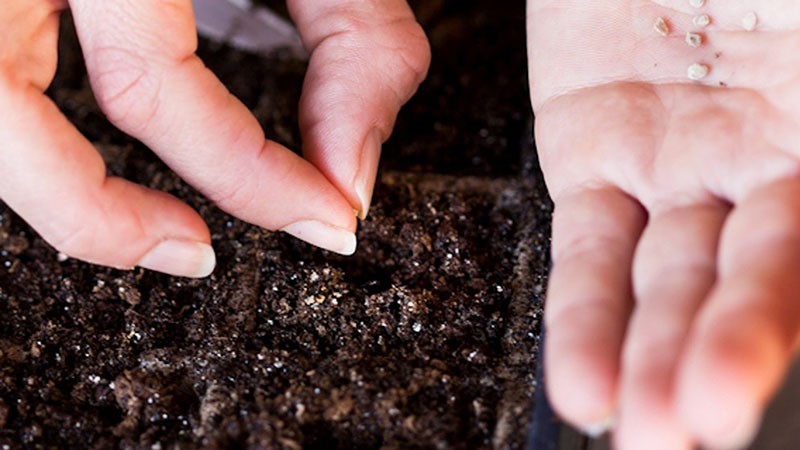 Sow it in boxes 50 days before the approximate date of transferring seedlings to the garden according to the following scheme:

Then the containers are taken to a room where the temperature is maintained at about + 20 ° C. Stretch a film on top or put a transparent glass. After about 10 days, shoots will appear. After the appearance of real leaf plates, the bushes dive into separate pots or containers. When the bushes get stronger, they are prepared for the changing environment.. 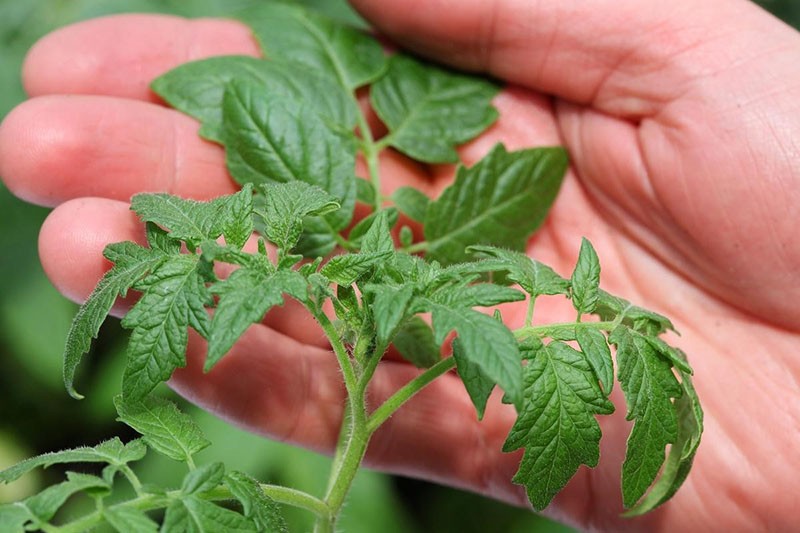 For 14 days, the seedlings are taken outside and kept for 30 minutes. The time is gradually increased to 12 hours. The seedlings of the Miracle of the Earth tomato variety, ready for the new conditions, are transferred directly to the garden bed or to the greenhouse, where they maintain the optimum temperature of + 23-25 ​​° C. Thanks to this microclimate, self-pollination of the culture occurs..

To get large fruits, 2-3 ovaries are left on each flowering brush. 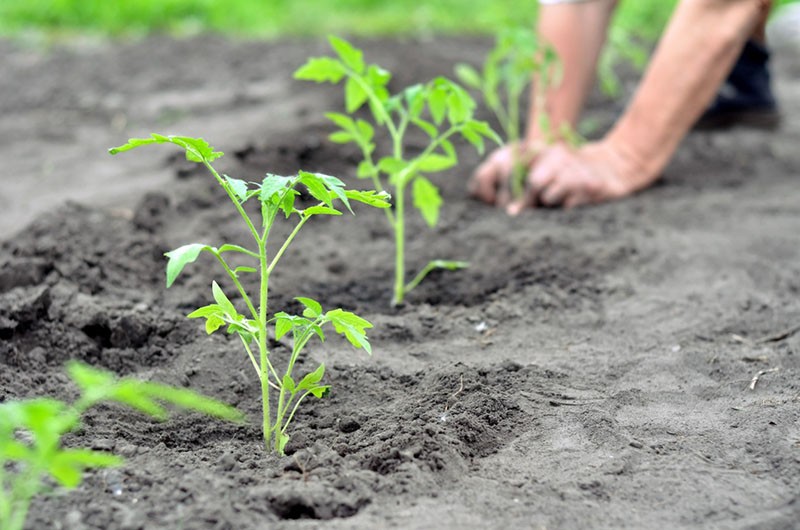 The first step is to prepare the bed. The plowed soil is leveled with a rake. Holes are made at a distance of 70-80 cm from each other. As a rule, 3-4 bushes are placed on 1 m². About 1 liter of water is poured into each hole. The seedlings are laid out at an angle of 45 °. Then sprinkle with soil and compact the top layer. Supports up to 2 m high are installed next to the bushes or strong trellises are erected.

It is desirable to tie the branches with a dense and wide rope so as not to damage the young shoots.

What care does a tomato need? Miracle of the earth 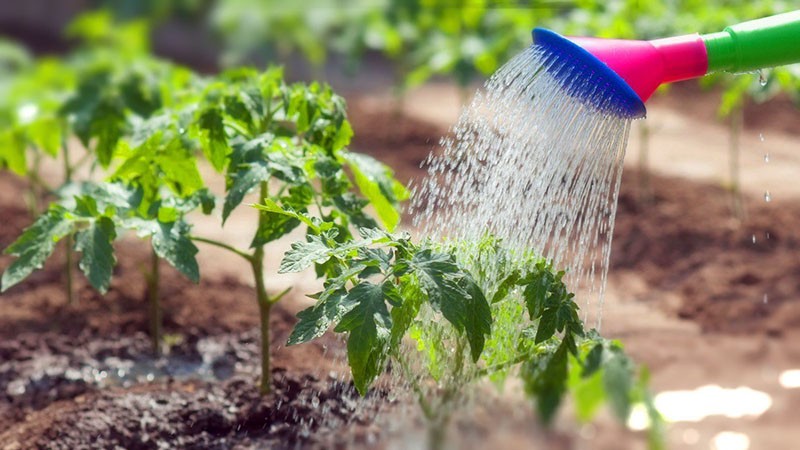 Successful cultivation of tomatoes The wonder of the earth directly depends on timely watering and feeding. Humidification is carried out depending on weather conditions. If necessary, young seedlings are watered once a week with 3 liters of liquid under each bush. The procedure is performed after sunset or early in the morning. The next day, the dried soil in the root area is thoroughly loosened, while removing weeds.

The culture is fed with substances that contain phosphorus, nitrogen and calcium. If possible, use a solution of mullein or chicken droppings. 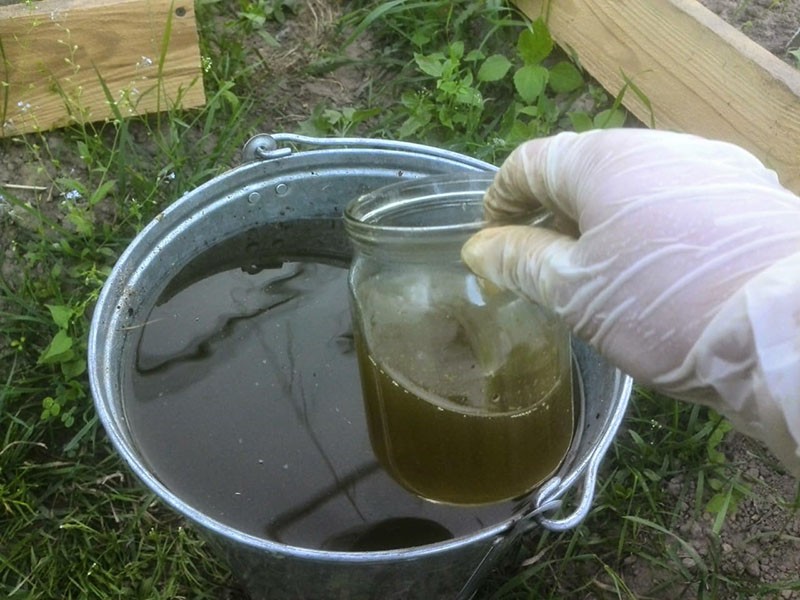 Throughout the season, tomatoes are fertilized 3 times:

In the first month of summer, they begin to form compact bushes. As a rule, they consist of 2 shoots. Leave the most dense and elastic specimens. The rest of the stepsons, who have reached 8 cm in height, are carefully cut off. If necessary, repeat the procedure every 10 days in the early morning or evening..

It is advisable to remove stepsons only until mid-July, so as not to disrupt the process of tomato development..

Tall crops need a solid foundation. Therefore, the Miracle of the earth tomatoes are well spud at least 3 times. The hill is formed in the root area of ​​the plant. If there is dry, sultry weather outside for a long time, the soil is covered with mulch. Thanks to this, moisture is retained, and the growth of weeds stops.. 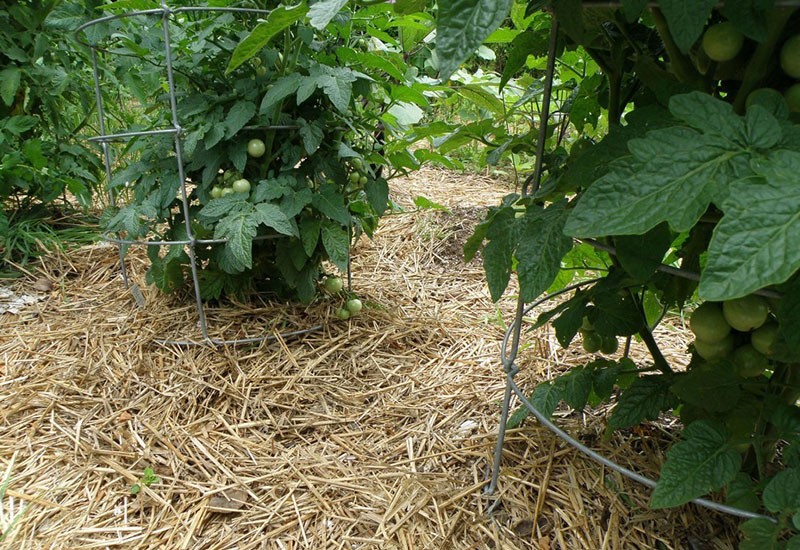 In addition, mulch protects the plant from beetle larvae, which do not like moisture. Tomatoes do not affect late blight, which significantly increases the amount of harvest. If brown spot or tobacco mosaic is found on the bushes, drastic measures are immediately applied. Infected plates are cut off, lubricating the sections with a solution of potassium permanganate.

For the treatment of tomatoes from tobacco mosaic use insecticides “Zaslon” or “Barrier”. 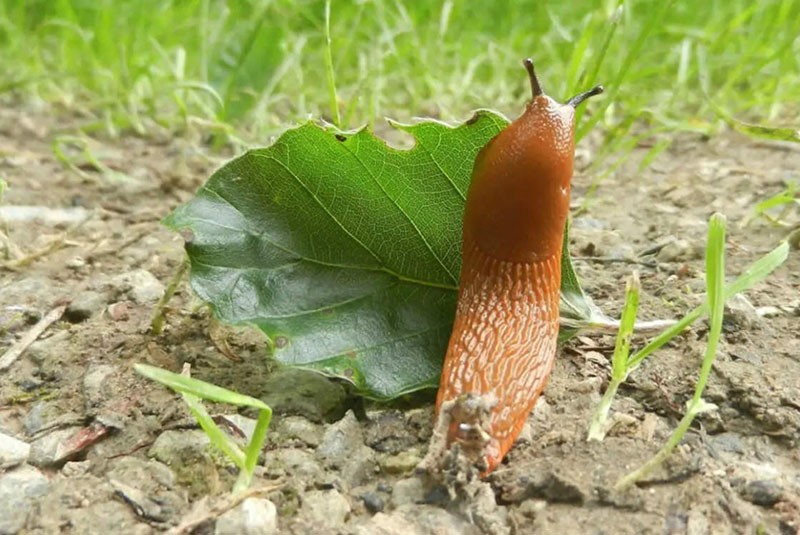 Like all vegetable crops, the Wonder of the Earth variety is sometimes infested with slugs. They are disposed of with wood ash. It is introduced into the root zone of the plant. Another worst enemy of tomatoes is the bear. Insects live in small groups in the garden. To get rid of them, the nests are watered with a “fiery” solution. It is made from water and pepper. The culture is saved from the tick by spraying the tops with soapy water. For 10 liters of water, 100 g of foaming agent is enough. In extreme cases, the bushes are treated with chemicals..

An amazing variety of tomatoes The Wonder of the Earth is gradually gaining popularity among gardeners. Unpretentiousness to natural conditions allows you to grow crops almost throughout the country. First, the seeds are sown in containers. The resulting seedlings are transferred to greenhouses (in the north) or to the beds. Care includes timely watering, feeding, spraying the tops. After about 3-4 months, large pink tomatoes with excellent taste will ripen in the garden.

The miracle of the earth tomato grows in my greenhouse – video