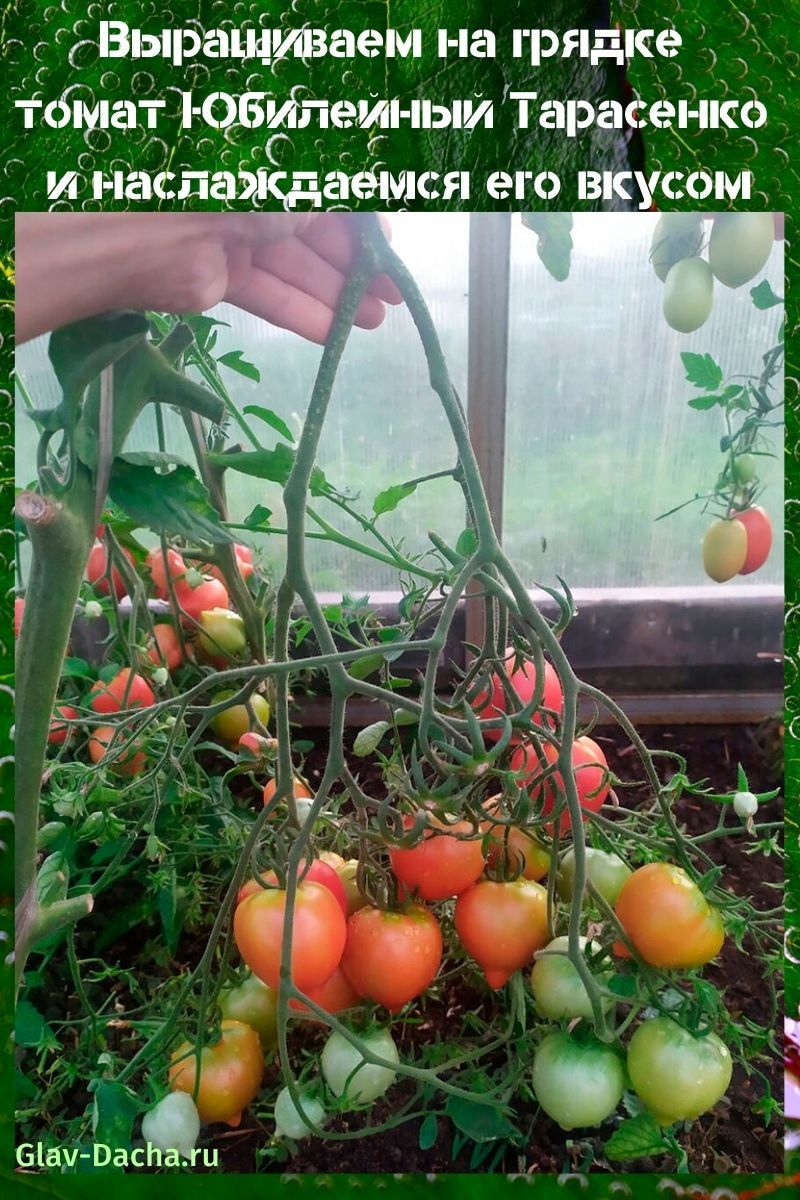 About 30 years ago, an amateur breeder bred the Yubileiny Tarasenko tomato, crossing several high-yielding varieties. One of them was the Mexican multifruit tomato San Morzano. The result is a crop with an early and medium ripening period. Today it is grown under film and in open beds in almost all regions of Russia, Ukraine and Belarus. Although the variety is not listed in the state register, it is especially popular with gardeners. Let’s get acquainted with the description of the Yubileiny Tarasenko tomato and the rules for its cultivation. 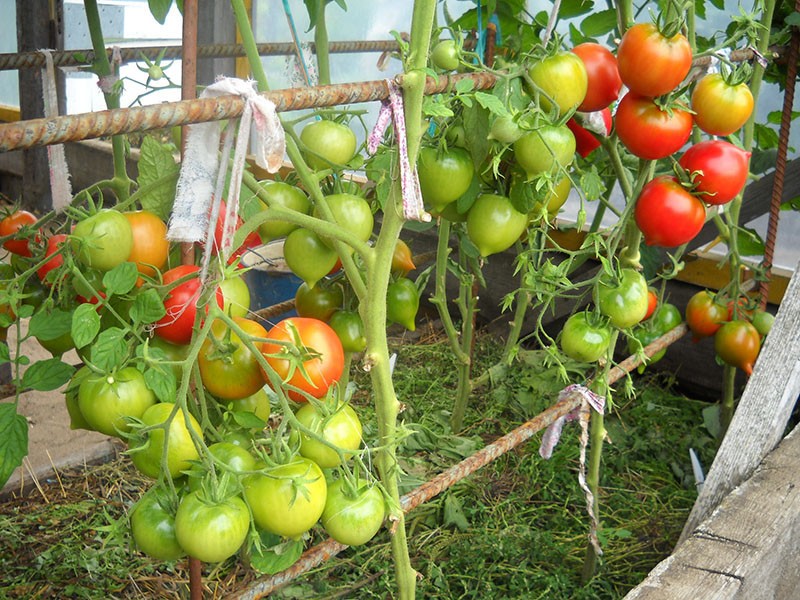 Tomato variety, bred by FM Tarasenko, is a bush with a height of 1.5 to 3 m. It consists of thick and powerful curly stems. They evenly grow large, non-pubescent leaves like those of a potato. During flowering, the buds form lush clusters resembling a bunch of grapes. Each of them contains up to 30 fruits. When they ripen, their weight is about 4 kg.. 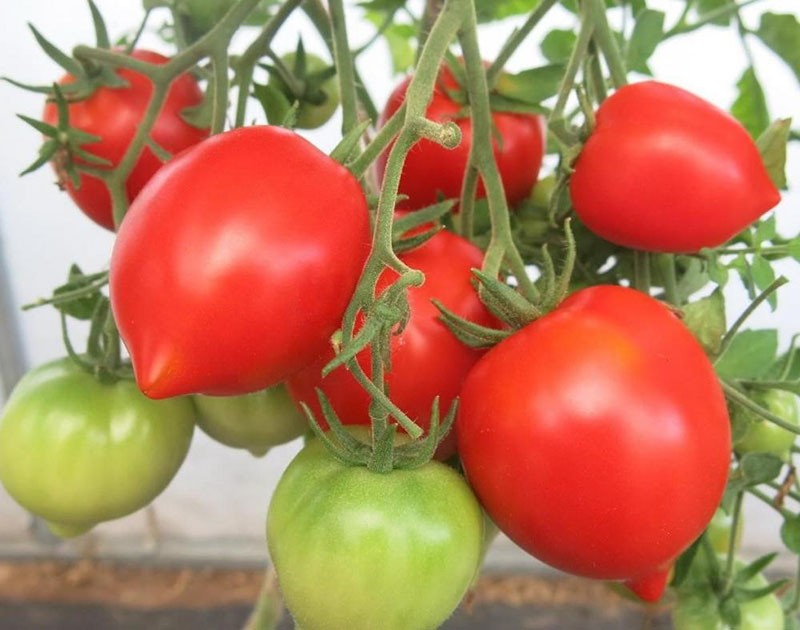 Tomato variety Yubileiny Tarasenko has a rounded fruit shape with a sharp nose in the center. It is colored orange-red. Thanks to their dense peel and pulp, tomatoes do not lose their attractiveness even during long transportation. Both small and large specimens grow on the bushes. The average weight of one tomato is from 70 to 200 g. The fruiting period lasts about 1.5 months. In regions with a cool climate, crops are harvested at the stage of blanche maturity..

Ripening of a tomato proceeds gradually. The fruits that grow in the center of the brush are poured first..

The main advantages of the variety 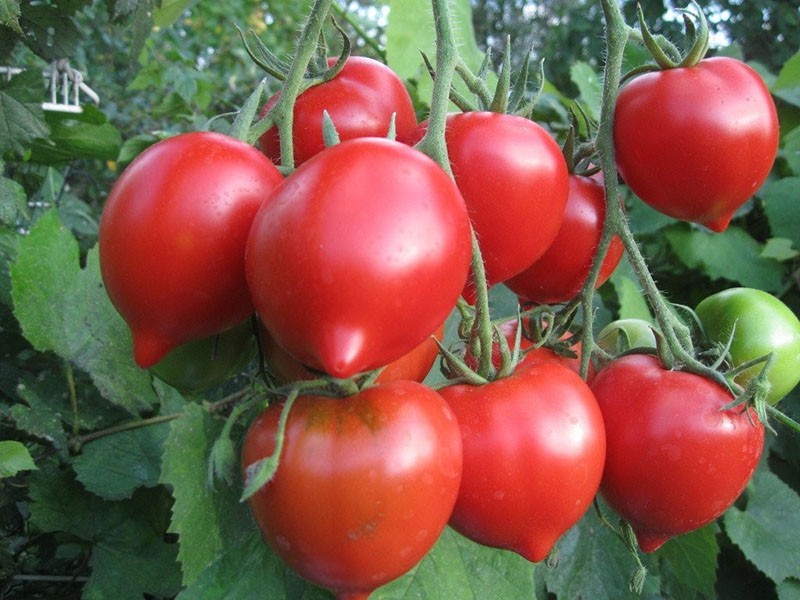 Considering the characteristics of the Yubileiny Tarasenko tomatoes, we note that the variety has no drawbacks. With proper care, the culture develops successfully and bears fruit abundantly.

In addition, a variety of factors determine the benefits of a variety.: 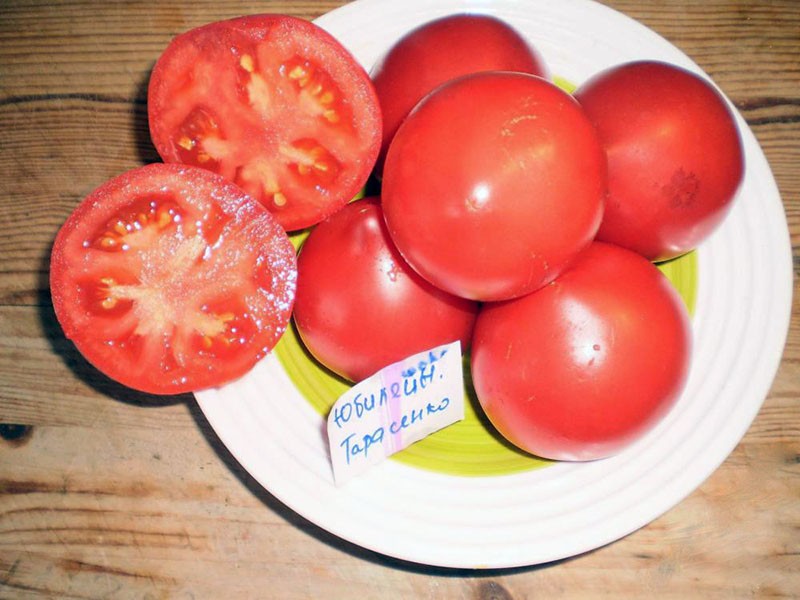 The maximum yield of tomato Yubileiny Tarasenko is 8 kg of fruits from one bush. To obtain such a result, the culture is diligently looked after and agrotechnical rules are carefully followed. They include timely moistening, feeding, loosening the soil and tying up bushes. If necessary, the plant is sprayed with chemicals. 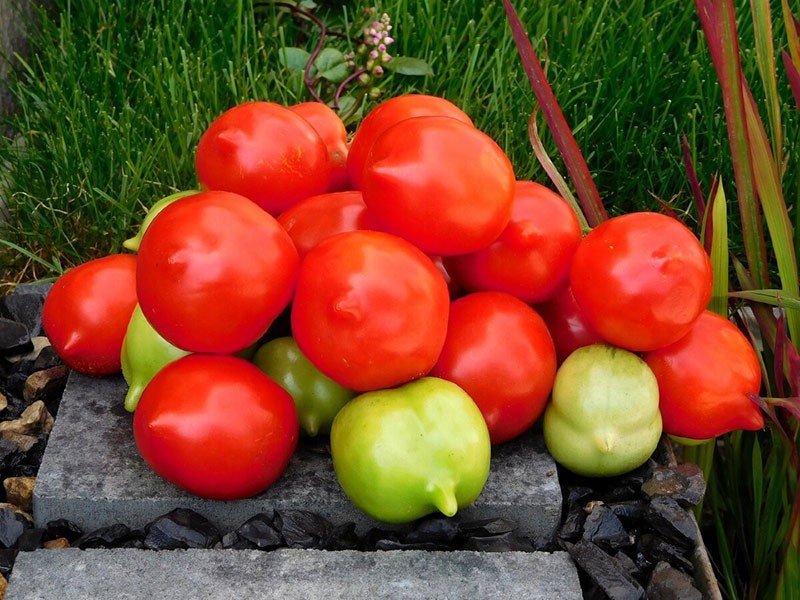 Even ripe tomatoes of the Yubileiny Tarasenko variety should not be used for juicing, since their pulp contains very little liquid.

How to grow a tomato Jubilee Tarasenko in a summer cottage

The process of growing a crop begins with sowing seeds for seedlings. The timing directly depends on the climatic conditions of the region. The main thing is that by the time the culture is transplanted to the garden, the seedlings are 2 months old.

In mid-latitudes, seeds are sown in the 20th of March for open ground, and two weeks earlier for the greenhouse. Initially, medium-sized containers are taken for sowing and filled with a nutrient substrate..

It is bought in specialized stores or prepared independently from components.:

In equal proportions, the constituents of the substrate are mixed, after which disinfection is carried out. The procedure is performed using a solution of potassium permanganate. Also, the soil is heated over steam or placed in a freezer for 45 minutes..

To protect the crop from diseases, it is advisable to disinfect tomato seeds in a pink solution of manganese. 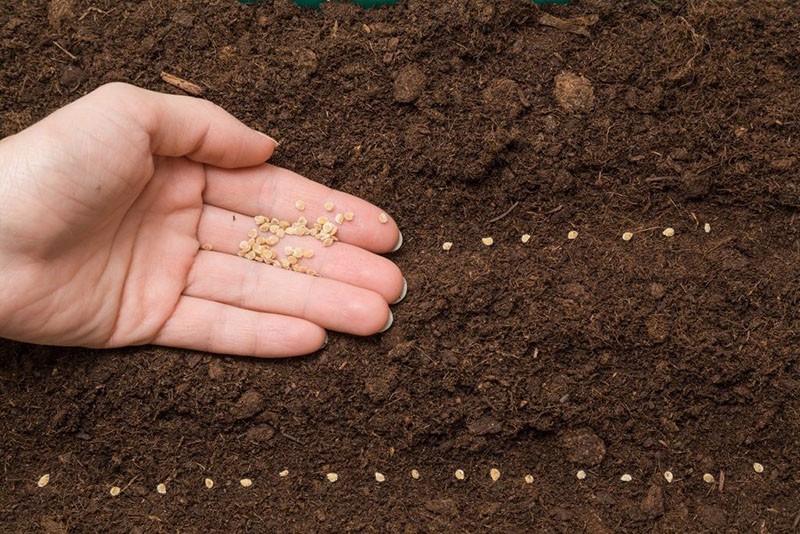 Tomato grains are laid out on the surface of the soil. The distance between them is 2 cm. Then the seeds are buried by about 1.5 cm. Sprinkle them with soil on top, moisten them with warm water. The containers are covered with polyethylene, and after the sprouts appear, they are removed. Seedlings dive into separate cups with a volume of 300 ml, after the formation of two true leaf plates.

Planting tomatoes in the garden

Tomatoes are hardened artificially 15 days before planting. Plants are taken out into the street, increasing the exposure time daily. Parallel to this, the site is being prepared. First, it is thoroughly watered with a solution of potassium permanganate, and then dug up and level the site. The wells are staggered at a distance of 70 cm from each other. The depth of the funnel is approximately 30 cm, and the width is 15 cm. At the bottom of the hole, 0.5 liters of water is poured. When it is absorbed into the soil, tomatoes are planted. The resulting voids are filled with soil and lightly tamped.

Too tall tomato seedlings of a liana-like variety are placed in the hole at an angle so that they do not suffer from wind or spring precipitation.

Caring for and attention to a fertile plant 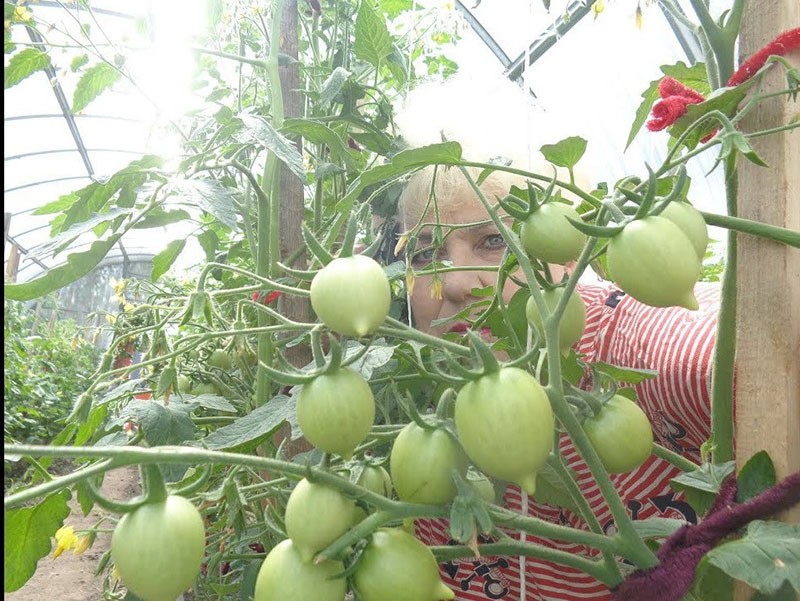 Planned planting of Yubileiny Tarasenko tomato and caring for it in open ground often lead to bountiful harvests.

The whole process, from start to finish, is performed according to a simple scheme:

When young seedlings get stronger and new leaves grow on the shoots, they establish a reliable support. Often it is made from stakes and a wire stretched between them (trellis). Bushes are tied to a support with strips of fabric or a wide rope.

Tomatoes are watered only in the absence of natural precipitation. The stream of water is directed to the root area of ​​the plant. The next day, the dried soil is gently loosened.

To obtain a bountiful harvest, bushes are formed into 1 or 2 stems. The remaining shoots are removed throughout the growing season every 10 days, when their length does not exceed 4 cm. Otherwise, the culture may suffer. In a similar way, the yellowed lower leaf plates are torn off. Remove no more than 3 plates at a time. Three times a season tomatoes of the Yubileiny Tarasenko variety are sprayed with copper-containing substances.

Bushes of a plant that have reached a height of 1.7 m, it is advisable to pinch them in order to improve the taste and size of the fruits.

In addition, tomatoes of the Yubileiny Tarasenko variety are regularly examined in order to detect pests. Colorado beetles are harvested by hand (if small) or using Taboo or Apache chemicals. In a day, all insects will die. The main thing is to complete the procedure before the mass flowering of the tomato. Weeds are cut out between rows as needed. Tall grasses usually shade the area, depriving the bushes of sunlight.

So, we got acquainted with a tall mid-season tomato variety Yubileiny Tarasenko. It has a high yield. The plant is resistant to cold weather, pests and various fungal diseases. It is grown in seedlings in a residential area. After hardening, it is transferred to a greenhouse or to a garden bed. The fruits ripen in stages, which allows harvesting the whole season. Care includes installing a support, removing stepchildren, yellowed foliage, fertilizing and treating the tops with chemicals.