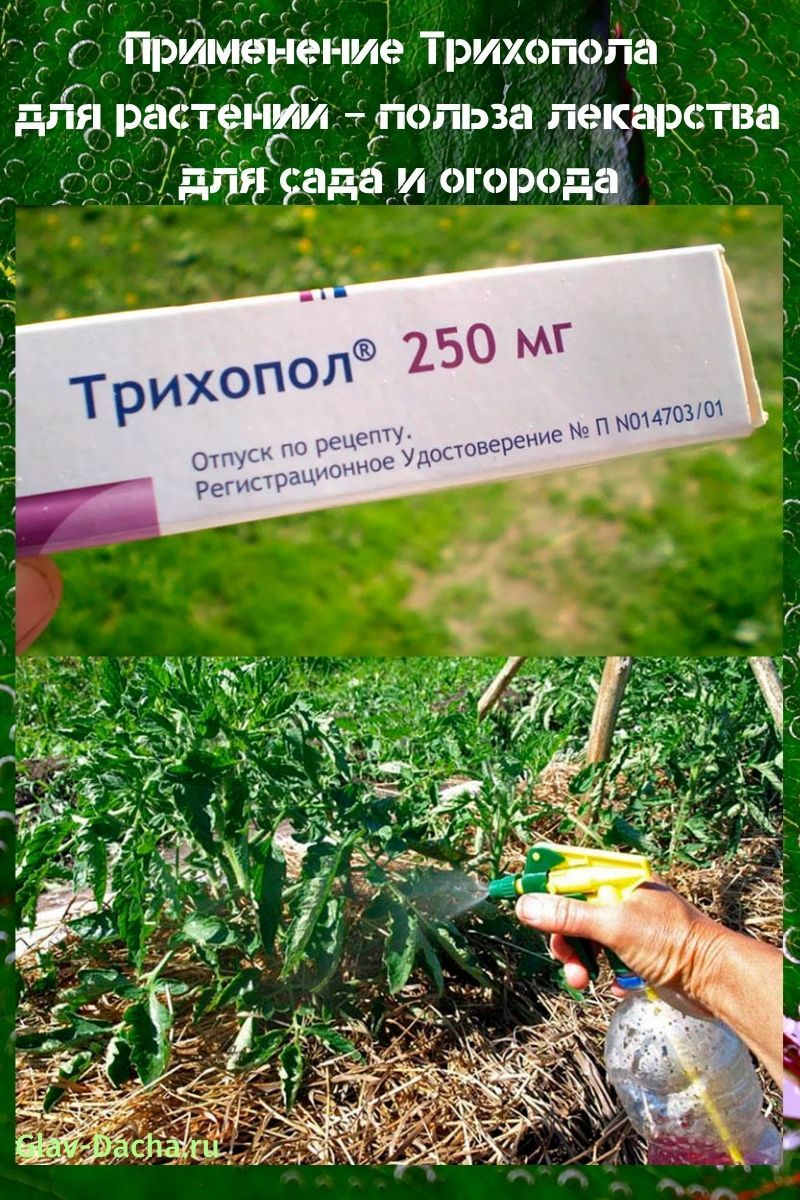 Many summer residents and gardeners use effective medicines as an affordable alternative to expensive medicines to protect garden and vegetable crops from diseases and pests. The use of Trichopolum for plants has gained wide popularity, because this inexpensive medication allows you to get rid of fungal infections caused by pathogenic microorganisms. With the help of Trichopolum, you can cope with late blight on tomatoes and potatoes, bacteriosis of cucumbers, leaf mold, bacterial spotting and other diseases of vegetable and fruit crops. 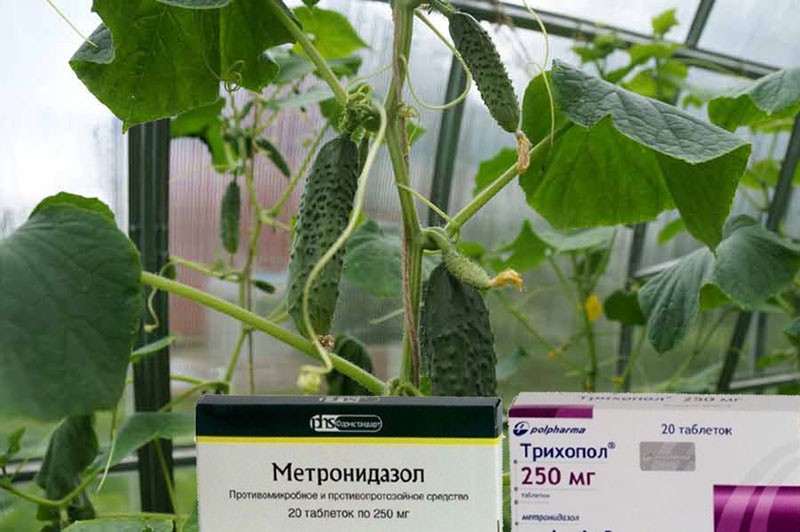 The popularity of the use of Trichopolum for plants is due to its pharmacological action. This medicine contains metronidazole, an active substance with antimicrobial and antiprotozoal action..

Metronidazole blocks the synthesis of nucleic acids in pathogenic microorganisms, causing their death.

It is effective against various diseases of fungal origin:

With the correct use of Trichopolum for plants, you can not only get rid of fungal diseases, but also scare away pests – cabbage and onion flies, slugs, aphids.

Metronidazole from tomato phytophthora, as well as for other vegetable, fruit and berry and ornamental crops, is used in the form of a solution. It can be used in two ways – for watering and spraying crops.

It is advisable to spray with a drug at the first signs of fungal diseases or for their prevention..

How to dilute metronidazole for plants:

The working solution must be used immediately after preparation, it must not be stored longer than half an hour.. 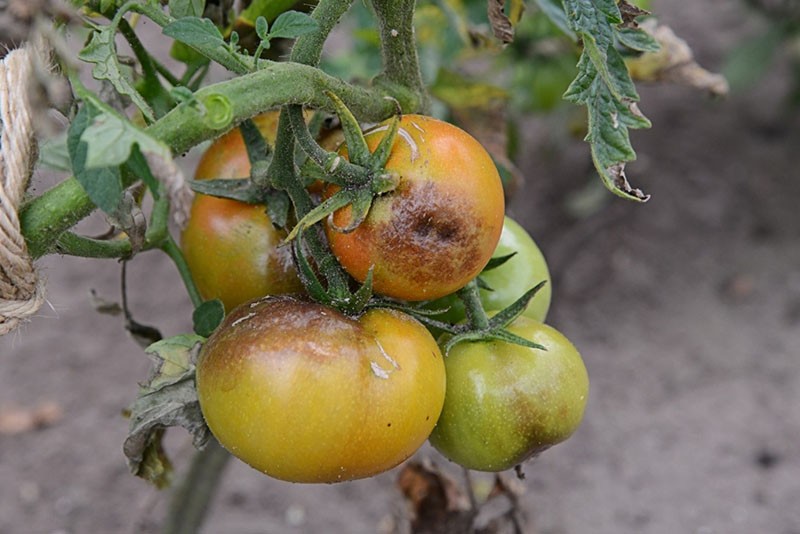 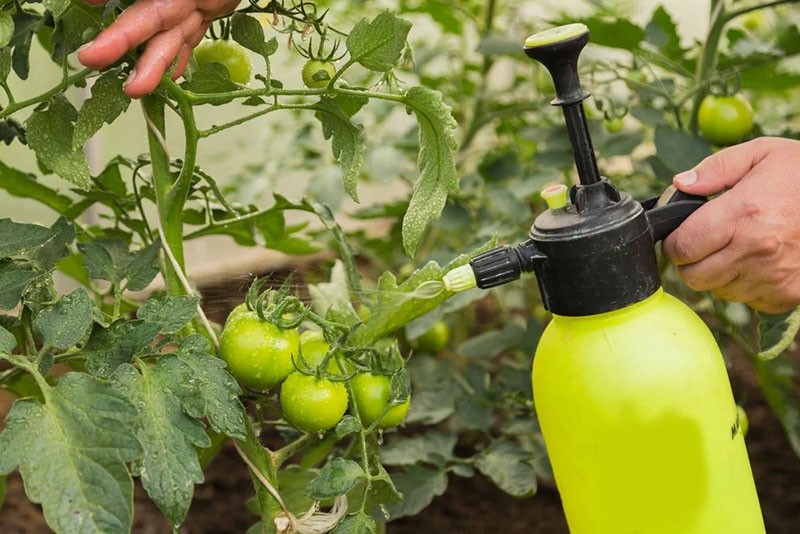 Simultaneously with tomatoes, it is desirable to process all nearby plantings. Processing is carried out 4-5 times throughout the season with an interval of 11-13 days. Trichopolum solution can be used for spraying on leaves and root irrigation. The last treatment should be carried out no later than 2 weeks before harvest.

The effectiveness of the product can be increased with the help of pharmacy brilliant green:

Processing tomatoes with Trichopolum with brilliant green should be abundant – you need to moisten each bush with the prepared solution. If it starts raining within 24 hours after spraying, it must be repeated. This treatment should be carried out every 10-12 days.. 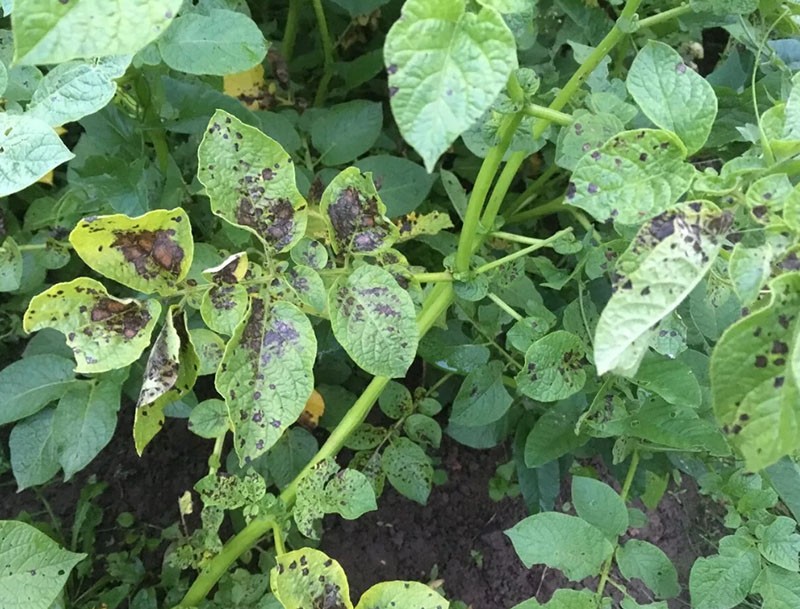 The first signs of late blight on potatoes most often appear in mid-July. Dark spots appear on its leaves, which quickly increase in size, and white spores can be seen on the underside of the tops..

Trichopolum against phytophthora on potatoes is recommended to be used immediately at the first manifestations of the disease. For processing, a standard solution of 20 tablets per 10 liters of water is used. For best results, you can add a bottle of brilliant green or iodine.

Potatoes should be generously sprayed with the prepared solution so that it literally drips from the leaves. The treatment should be repeated every 7-10 days until the signs of late blight completely disappear.. 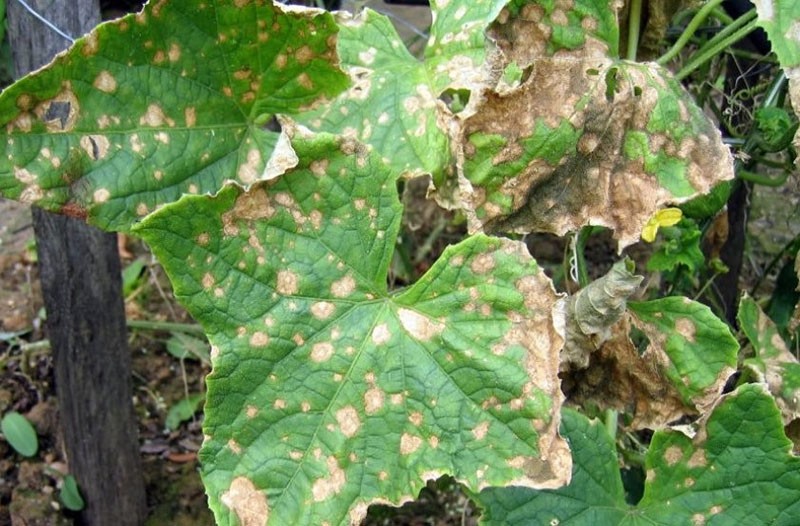 Trichopolum for tomatoes and cucumbers can become an effective “helper” in the fight against bacteriosis, which often affects cucumbers. In this case, the cucumber leaves are covered with angular specks, which quickly spread to the stems and even fruits..

The main danger of bacteriosis is its rapid spread to healthy plants. Therefore, the fight against the disease should be started immediately after the first spots appear on the cucumber foliage..

Cucumbers can be processed in two ways.:

In the case of a strong infection of cucumber beds with bacteriosis, you can combine both methods and use Trichopolum solution for watering the soil and spraying plants. 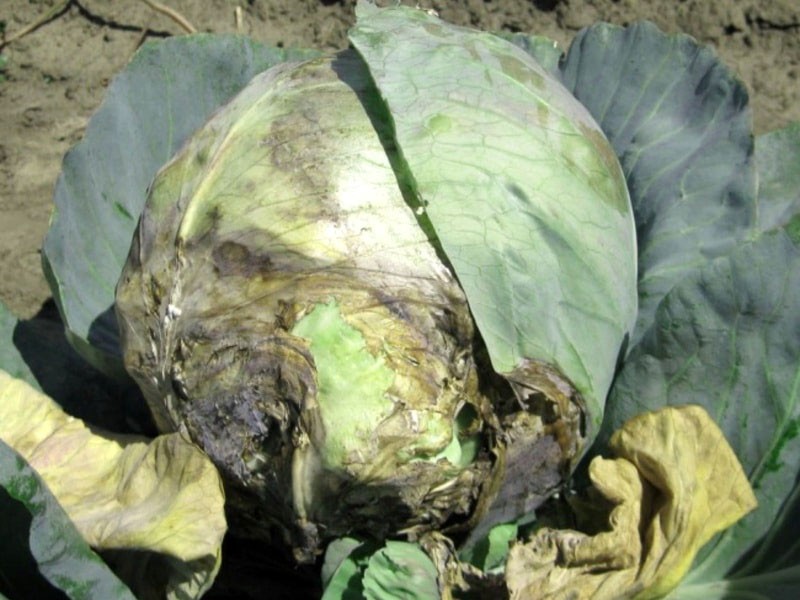 Trichopolum will help get rid of such a common disease of white cabbage as vascular bacteriosis. It can be identified by the yellowing of the foliage, the blackening of its veins..

Preparation of the solution:

After that, generously spray the beds with cabbage with Trichopolum solution.

The treatment must be repeated at least once every 10 days until the signs of bacteriosis disappear.. 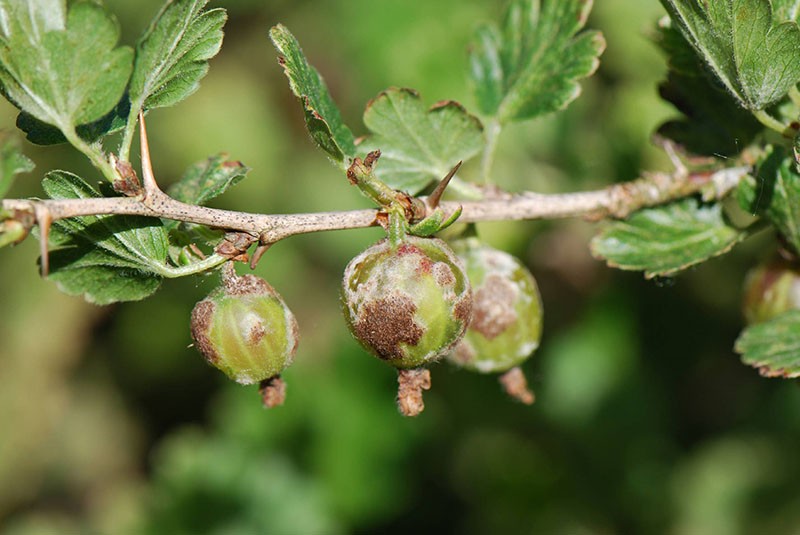 Powdery mildew on gooseberries not only impairs the yield of the bushes, but can also lead to their death. Along with chemicals, many summer residents and gardeners use Trichopolum solution, which helps to get rid of powdery mildew and prevent its spread to neighboring shrubs..

The solution is prepared in a standard dosage of 2 tablets per 1 liter of settled water at room temperature. This liquid should be sprayed on all bushes – both wilted and healthy.

For a faster result, iodine or brilliant green can be added to the solution – 1 ml for each 1 liter of water. 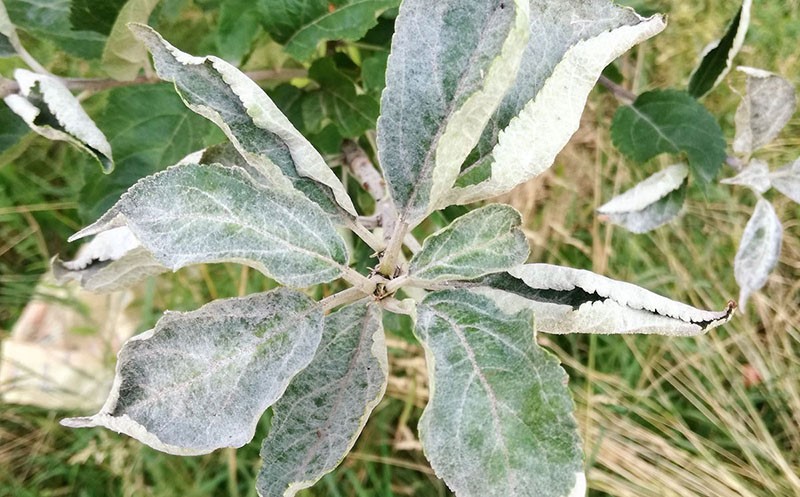 Trichopolum can be used to combat fungal infections of apples, pears, cherries and other fruit trees. If the leaves of the tree began to fade, become covered with black dots and spots, this is a reason to treat them with Trichopolum..

The solution is prepared in a standard proportion and applied for treatments every 10-12 days. You can also additionally lubricate the bark of a tree affected by fungal infections with “gruel” made from crushed Trichopolum tablets and a small amount of warm water. 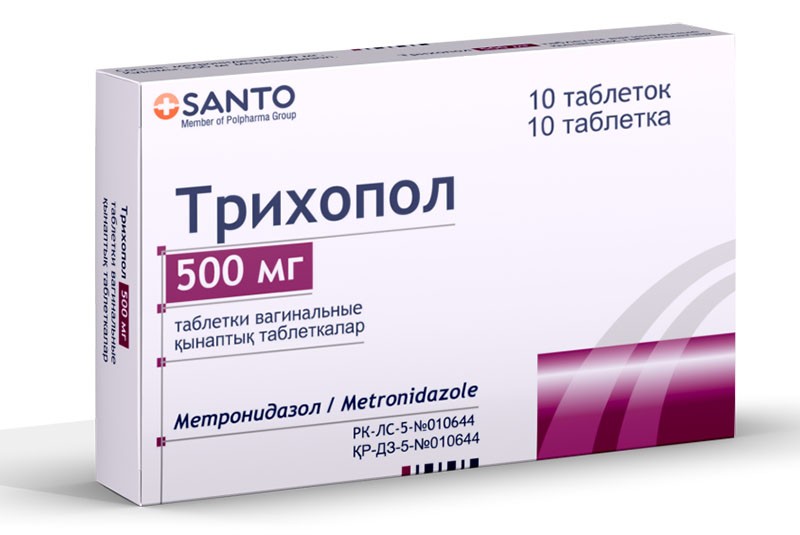 Trichopolum is an effective alternative to chemicals for protecting garden and garden plants from fungal diseases. Summer residents and gardeners use this inexpensive medicine to combat late blight, bacteriosis and other diseases of fungal origin, as well as to prevent them..