We study effective ways of breeding viburnum at their summer cottage 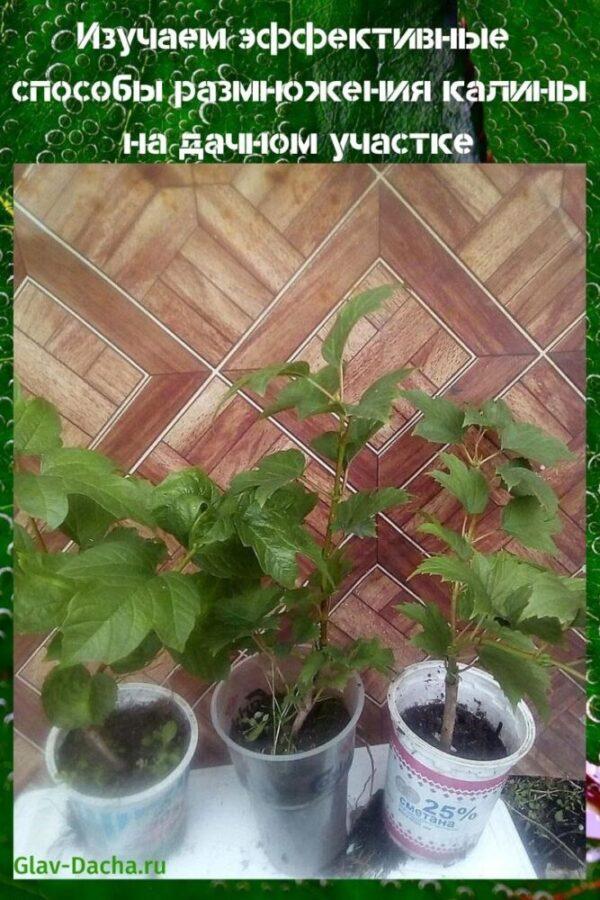 Imagine an alley of luxurious shrubs strewn with clusters of scarlet berries. You can create such beauty on your site yourself using simple methods. Reproduction of viburnum ordinary and varietal is carried out using cuttings, dividing the bush, layering and seeds. It is good if at least one specimen of the desired culture grows in the garden. It is she who is used as a “genetic” material to create an original avenue of pleasure. In addition, scarlet berries are a very healthy product. They contain an abundance of vitamin C, tannins, and a number of organic acids. It turns out that if you start breeding viburnum, it will bring double benefits.. 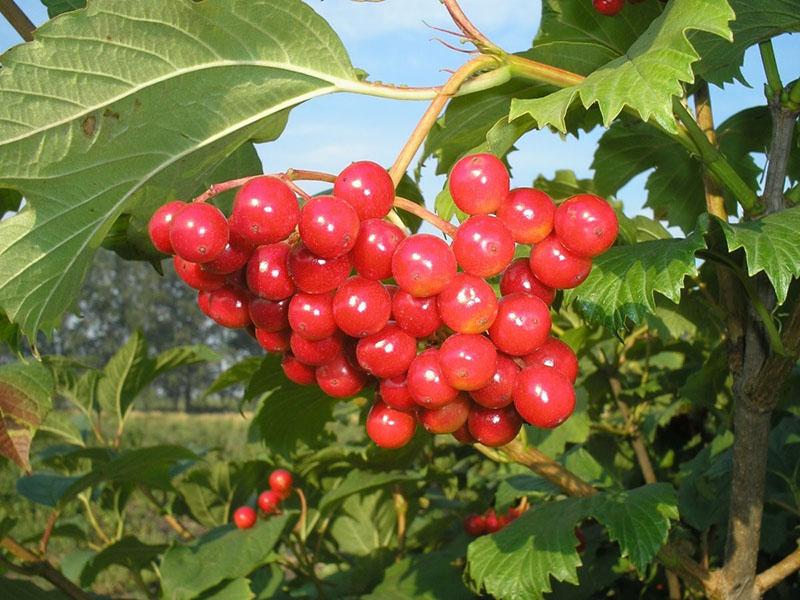 The famous expression “red viburnum” recalls the sad story described by Shukshin in his story. However, from the side, the shrub looks beautiful and solemn. Sprawling branches, a spherical crown and a height of up to 4 m. In nature, it is found almost throughout Europe, Asia, Kazakhstan and Siberia. It grows in mixed forests, small oak forests and even in the steppe zone. Kalina easily tolerates summer heat and winter cold. Prefers fertile soil and moderate moisture. 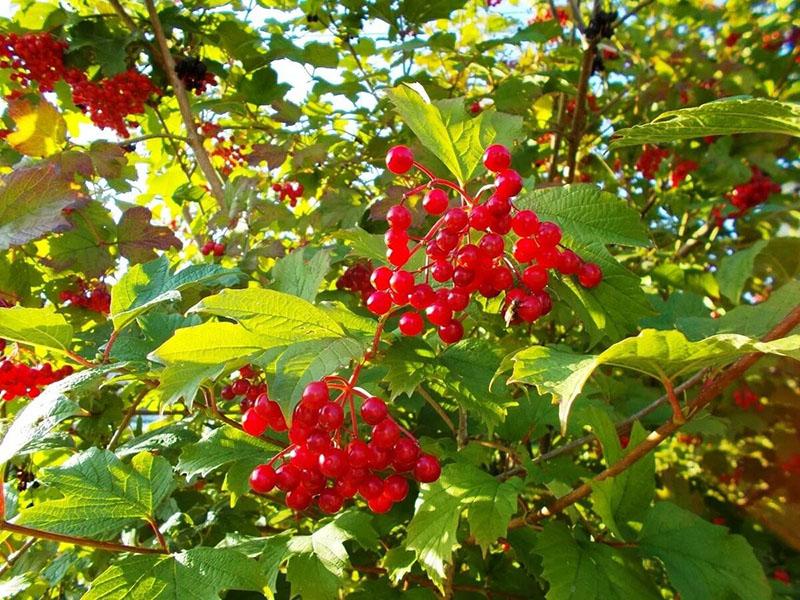 On the site, the plant wonderfully takes root both in the shade and in a brightly lit place.

To date, over 200 species are known. Let’s note only the most popular varieties of culture:

The green foliage of the viburnum has a scalloped frame and a carved shape. It resembles maple plates. In the fall, foliage takes on a reddish-brown hue, turning the shrub into a fireball against the backdrop of a dull garden. 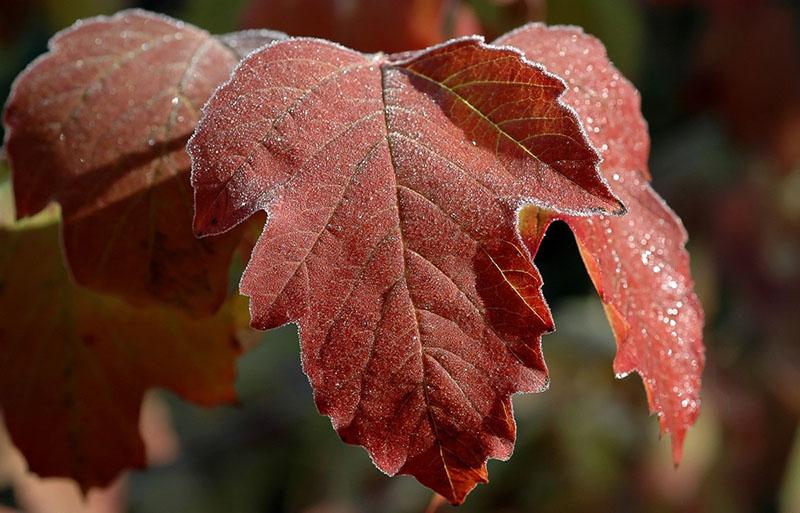 Just at this time, scarlet fruits ripen, collected in compact clusters. Berries have a tart taste that disappears after the first frost. 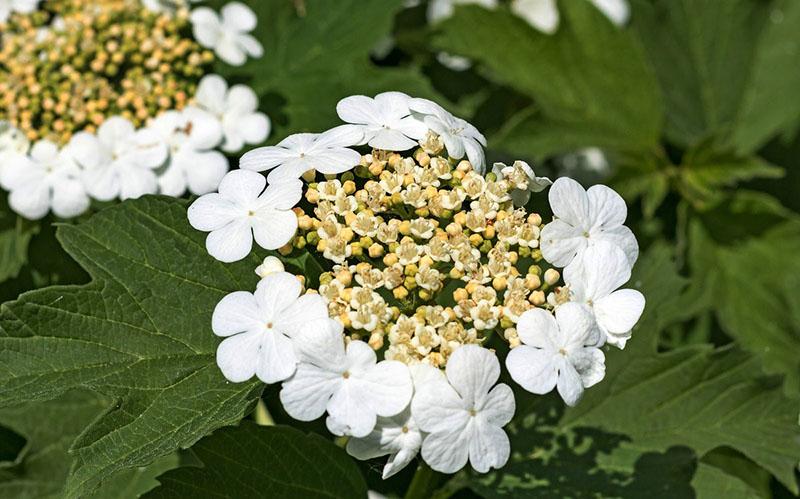 The viburnum wears a floral outfit at the end of May. It consists of two types of buds. In the center are small specimens with a short pistil and long stamens of white or pink color. Large sterile buds grow along the perimeter of the inflorescence. They attract insects that do their job. After successful pollination, spherical fruits appear.

Choosing a suitable method for breeding viburnum at home 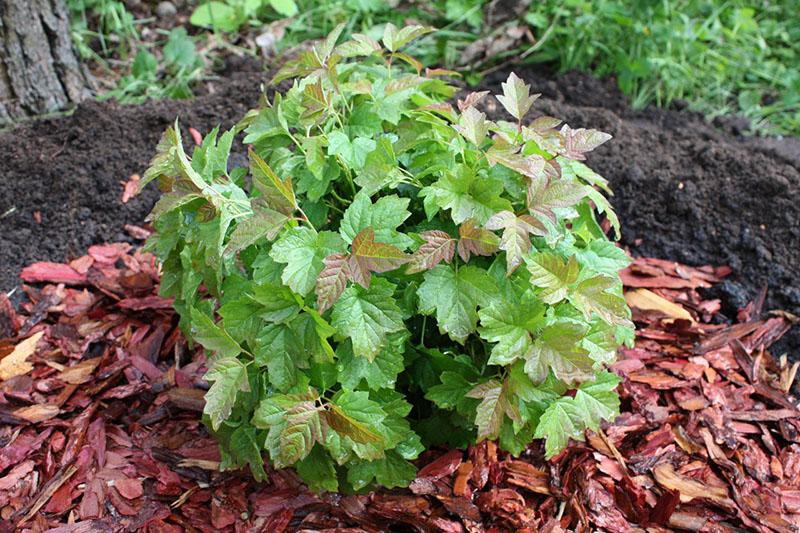 As you know, the key to success is skill, perseverance and obedience to generally accepted rules. With the same attitude, we approach the cultivation of young viburnum bushes. Gardeners provide guidance that will lead to success. Consider the most effective methods for breeding shrubs on the site. 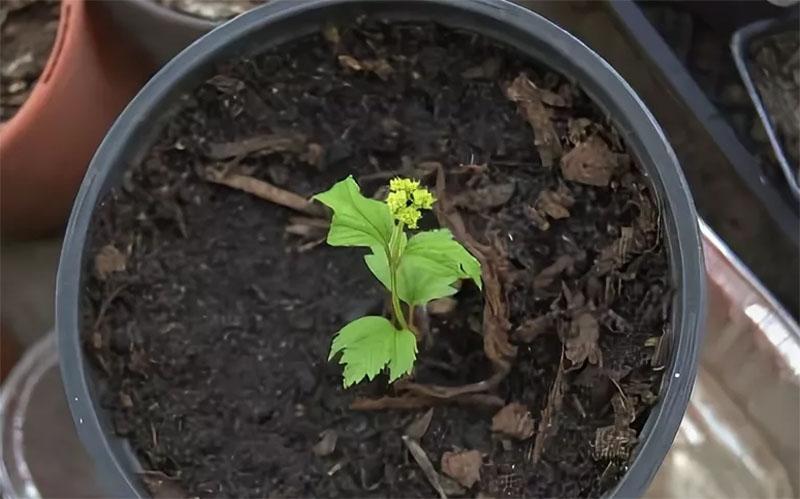 This type of reproduction of viburnum is considered the most effective. It is carried out in a high-speed or measured way. The first option begins in winter, when the plant is in hibernation. Annual branches are found on the culture, which are carefully cut off. The length of the cuttings should be about 20 cm. The branches are dipped in a container of water for about 3 hours. Then packed in a plastic bag and stored in a cool dry room until spring. 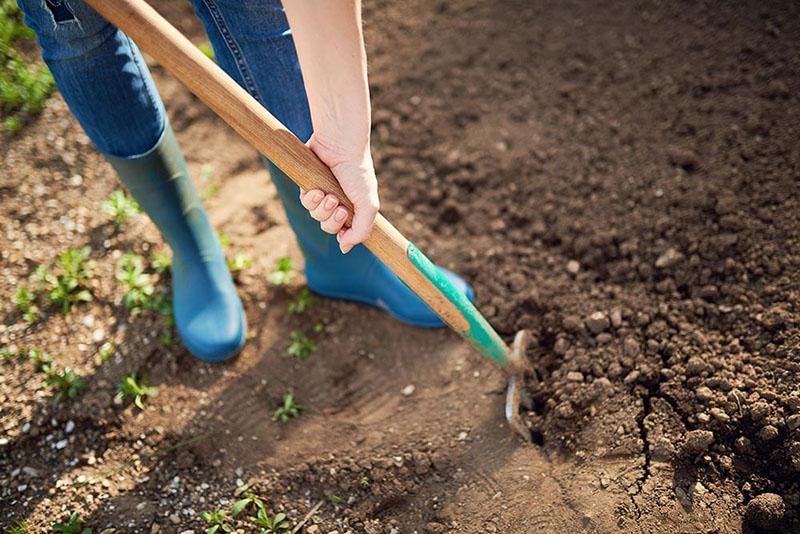 The process of reproduction of viburnum by cuttings in the spring begins with the preparation of the site on which they plan to grow the shrub:

Cuttings are planted in a row at a distance of 10-15 cm from each other. Place them at an angle of approximately 65 ° to the ground. In this case, the extreme kidney should be at ground level. The surface is slightly compacted, after which, as the soil dries, it is watered. In the fall, rooted specimens are transplanted to a permanent place..

It is advisable to place the shrub away from walnuts..

Autumn propagation of viburnum by cuttings 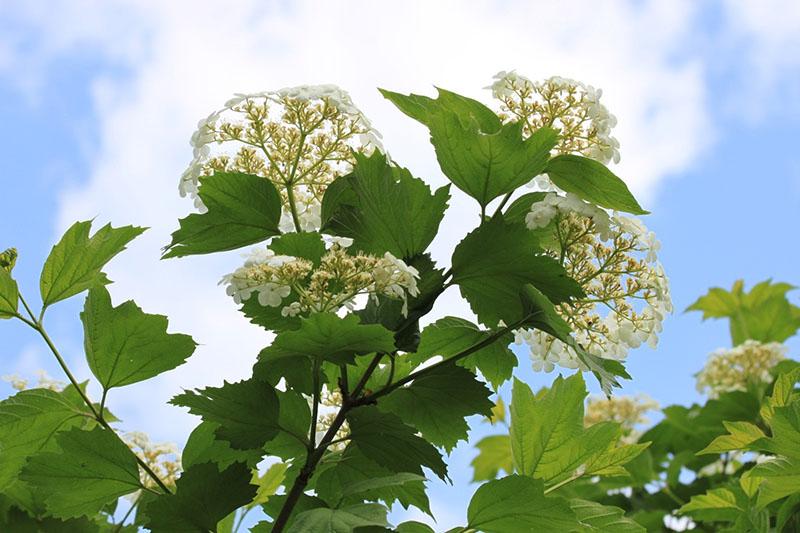 In a similar way, viburnum is propagated by cuttings in the fall, but the procedure begins in early July. During the period of lush flowering of the shrub, green cuttings are chosen. They can even be lignified, but flexible enough. If the branches do not break when bent, then you have high-quality planting material in your hands..

Shoots are cut with the first two buds about 12 cm long. Then they are divided into cuttings, one edge of which is made at an angle of 45 °. Green foliage is removed from the bottom of the blanks and placed in a special substance that stimulates root growth. The cuttings are kept in the solution for about 16 hours..

And at this time, a light substrate is prepared, consisting of the following components: 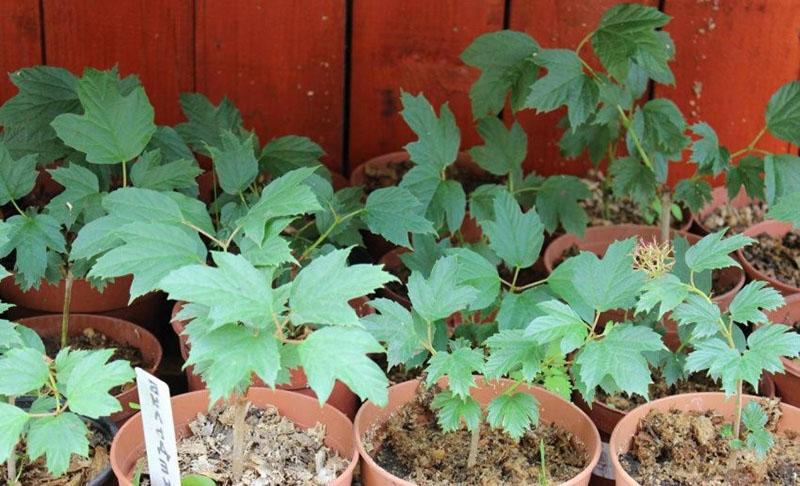 Fill containers. Then the holes are made at intervals of 7 cm. The cuttings are planted according to the traditional scheme and covered with foil. In a month they will take root and prepare for wintering. However, in late autumn, the bushes are covered with spruce branches and fallen leaves. And in the spring they are transplanted to a new place.

A large number of cuttings should be tied into a bundle before immersion in a strengthening substance.. 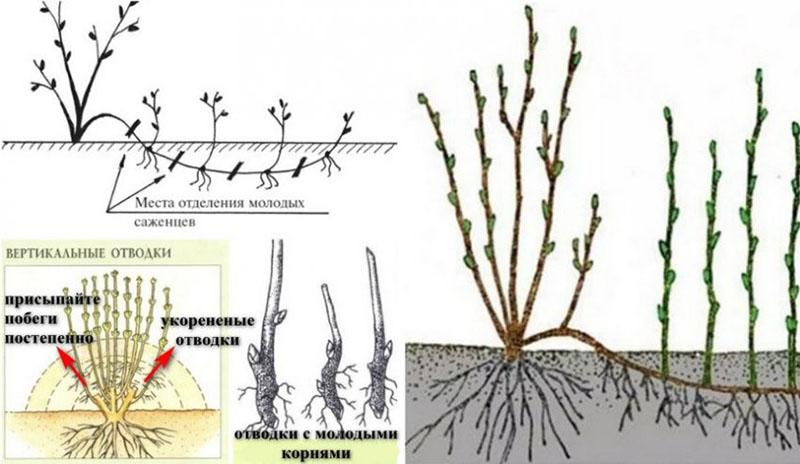 There is an easier option for growing useful shrubs in the country. Let us analyze how viburnum is propagated using vertical layering in stages. In late autumn, the lower branches of the plant are slightly shortened, leaving only 4 healthy buds. Then they are covered with earth for the entire cold season. In the spring, young shoots will grow from them. When the length reaches 10 cm, the layers are again covered with soil. In 5 months they will take root and in the fall they are disconnected from the mother bush.. 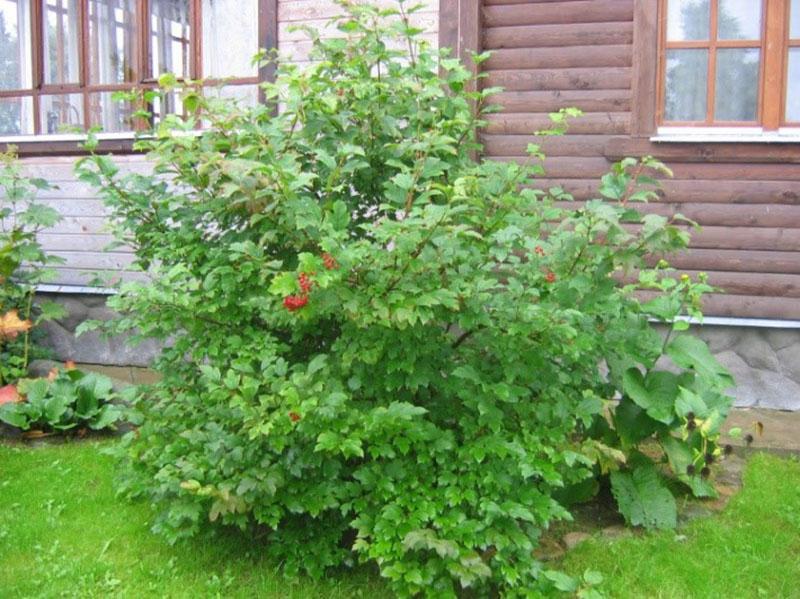 Horizontal layers are chosen in the spring. However, even in the fall, the land around the bush is thoroughly loosened with a shovel. In March, promising branches are bent to the ground and fixed with wire. Sprinkle with fertile soil on top. When the branches grow up to 20 cm, they are carefully spud. The procedure is repeated at least 2 times with an interval of 15 days. In the fall, the seedlings are transferred to a new site..

The process of reproduction of viburnum by seeds takes a lot of time and effort. Therefore, only a few use it in their practice. It consists of a number of procedures. The first step is to stratify the planting material. To do this, it is stored in a refrigerator, where the temperature does not exceed + 5 ° C, for about 7 months..

After the expiration date, preferably in the spring, they are sown in open ground or in a container. Crops are regularly moistened and the “beds” are weeded slightly. In late autumn, seedlings are covered with mulch or agrofibre. 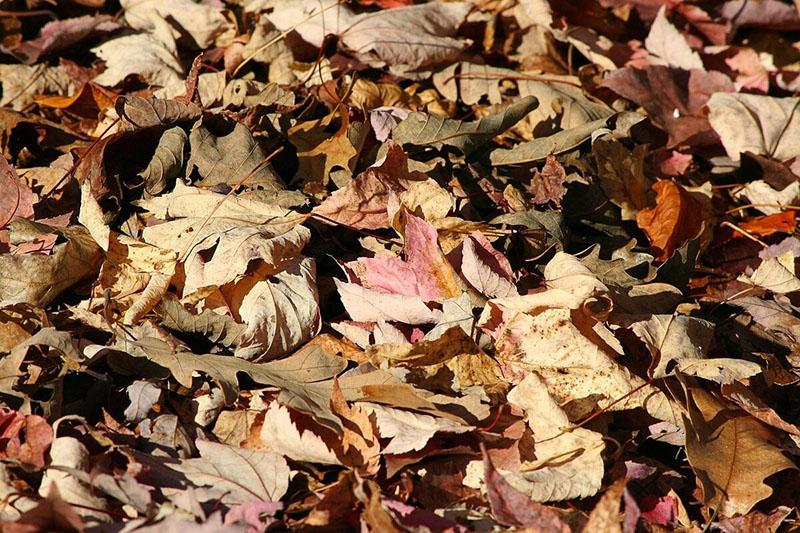 In the spring, the shelter is removed in order to see the young seedlings. They stay in the same place for one more season. The plant is transplanted only in the third year after sowing. The process is time-consuming, but quite exciting..

Before planting the viburnum in a permanent place, the bushes are shortened by about a third of the total size.

Reproduction of viburnum by dividing the bush 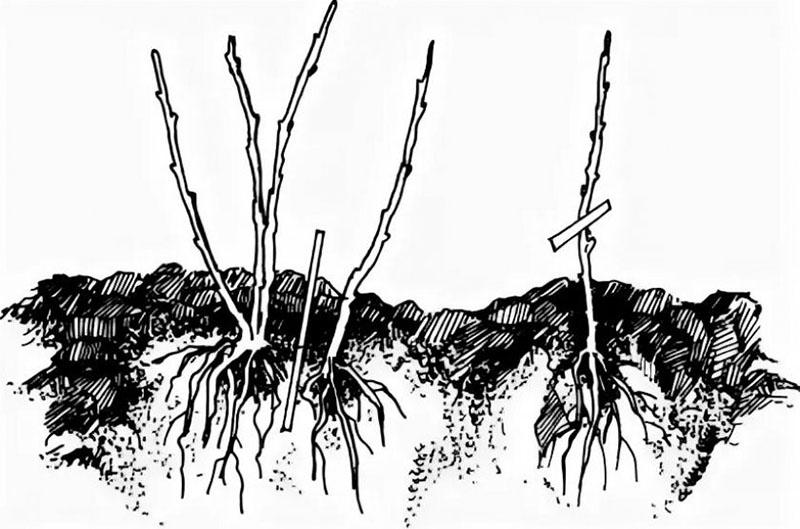 To preserve a valuable type of culture, they use a completely different option. Let’s figure out how to plant viburnum and not lose its decorative effect. Initially, the mother bush is divided into several parts. Each of them must have at least 3 kidneys. Slices are treated with a special chemical agent or garlic tincture. Then the resulting bushes are soaked in a root system stimulator for 2-3 hours.

The method is used in early spring before the beginning of the process of swelling of the kidneys..

In order for a newly minted culture to successfully take root in a new place, it is provided with decent care. In hot times, the bushes are watered abundantly, after which the topsoil is loosened. And before the foliage blooms, the plant is fed with nitrogen substances. In summer, mineral complexes are used for fertilization. Before wintering, potassium-phosphorus mixtures are introduced. The next feeding is carried out after 2 years..

The plant is treated with insecticides in early spring, until the foliage has blossomed. For the prevention of fungal infections, fungicides or a solution of laundry soap are used. Seedlings affected by powdery mildew, spotting or rot are treated with a Bordeaux mixture. Also, do not forget about regular weeding of the root area of ​​the bush. As a result, a viburnum with scarlet berries, sung by the masters of the pen, appears on the site..

To summarize, we note that gardeners propagate culture in different ways. For the case, cuttings, layering, seeds are used. And someone likes to divide the shrub in the garden. After planting, the plant is provided with moderate watering, feeding and planned pruning. Let the red viburnum please the eye of all who turn their eyes to it.

Reproduction of viburnum with 100% result – video