How to recognize dangerous poisonous plants in Russia 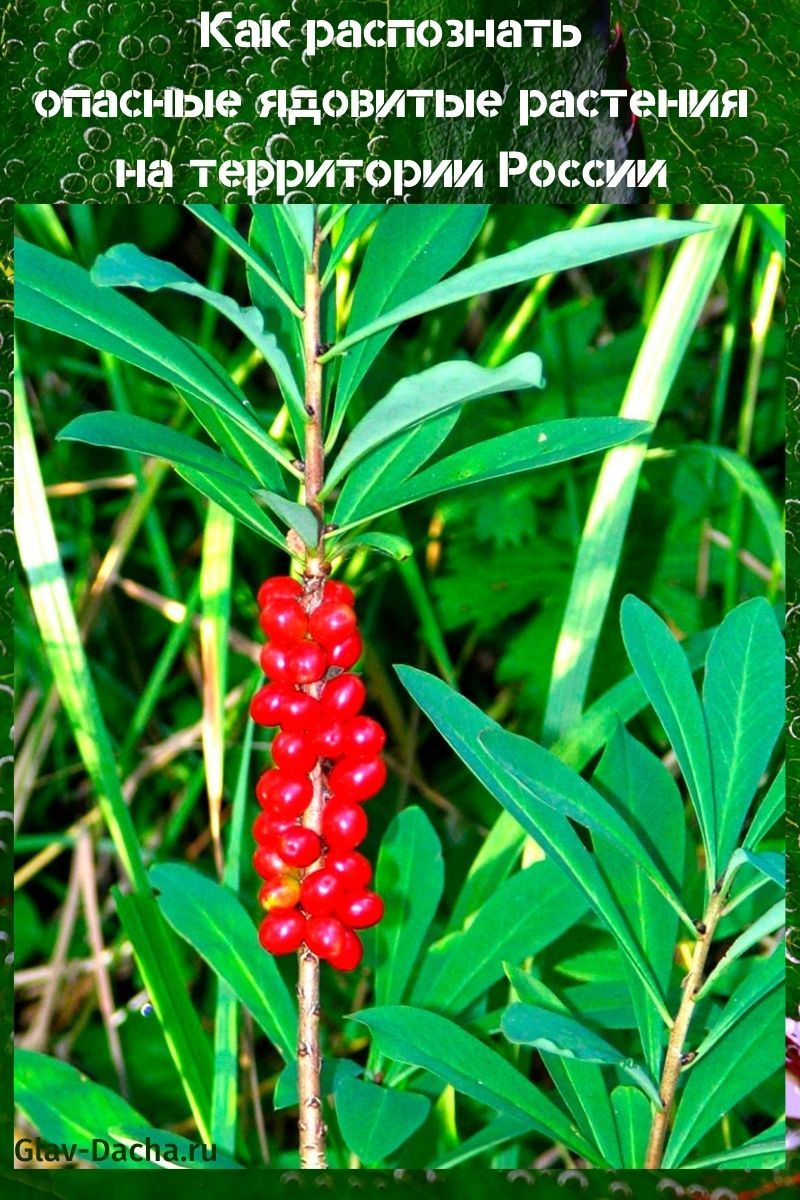 Poisonous plants are herbs, flowers, shrubs and trees containing toxic substances that are dangerous to health and even human life. There are at least 10,000 poisonous plants on the planet that are found both in the wild and are grown as ornamental landscape crops. Eating such plants, and in some cases touching them, can lead to serious poisoning. That is why it is very important to be able to distinguish poisonous plants, to know their external features and characteristics of their impact on the human body..

The most common poisonous plants in Russia 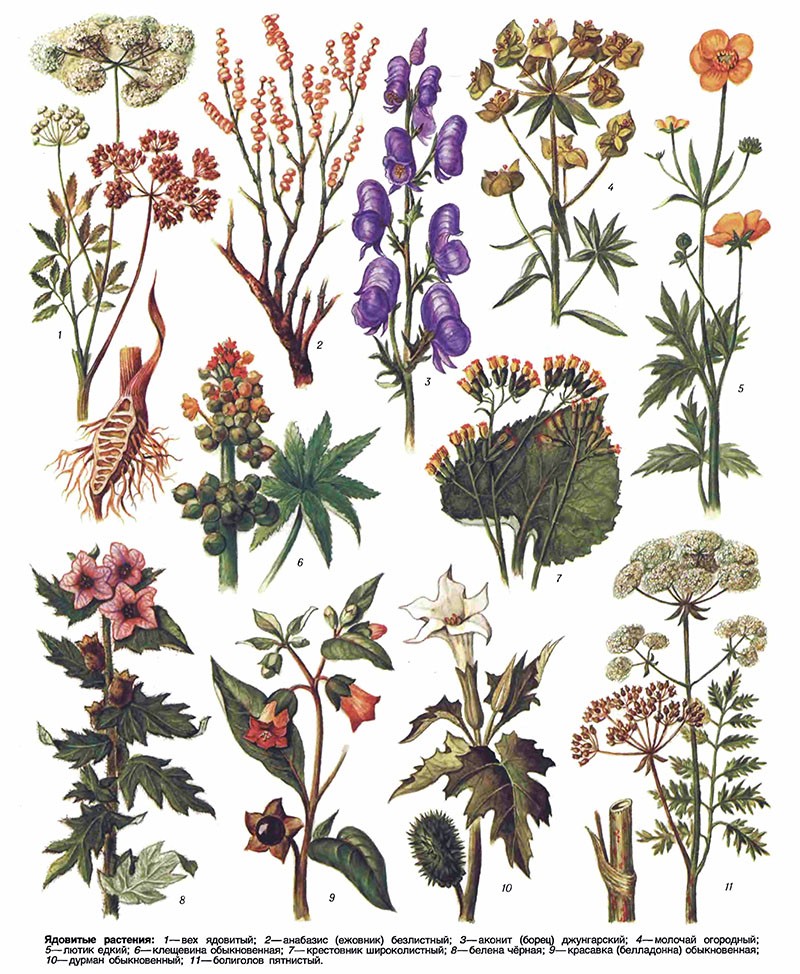 On the territory of Russia, several dozen poisonous plants grow – grasses, flowers, shrubs, dwarf shrubs and trees. Outwardly, many of them are similar to cultivated plants, so if you are unable to distinguish a dangerous fruit or berry, you can get poisoned.

The main poisonous plants of Russia:

Poisonous aquatic plants growing in reservoirs and grown in aquariums stand out separately. Such crops include Hygrophila balsamic, Elodea Canadian, Cryptocorynes and Krinum kalamistratum. These aquatic plants are dangerous for fish and other inhabitants of water bodies, as well as inhibit the growth of other algae..

The impact of poisonous crops on the body can be internal (when eating fruits or plant parts) or external (through bodily contact). Given the similarity of berries, flowers and other parts, it is very important to know information about poisonous plants and be able to distinguish them. 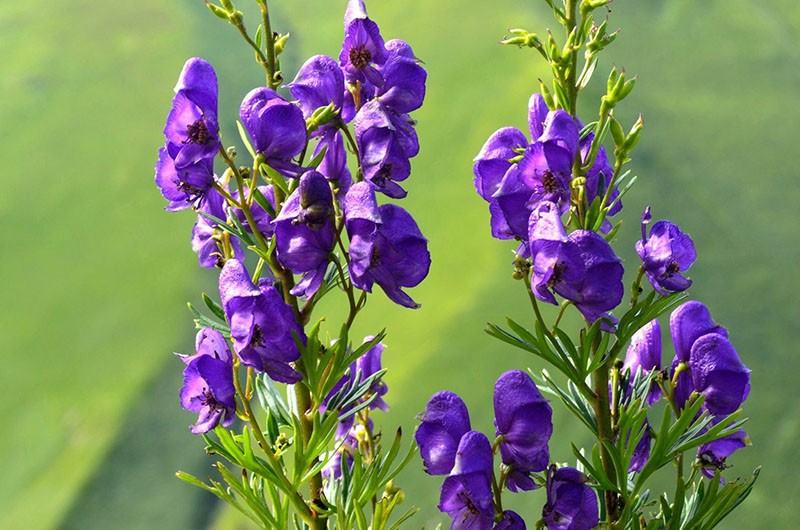 Aconite or wrestler is a perennial plant from the Buttercup family that is considered extremely poisonous. It is distinguished by its beautiful blue, purple or golden yellow flowers, thanks to which it is often used in ornamental gardening..

Aconite contains several dozen toxic substances, one of which is aconitine. Only 20 ml of this toxic substance is fatal, so aconite juice has long been used to lubricate arrows.. 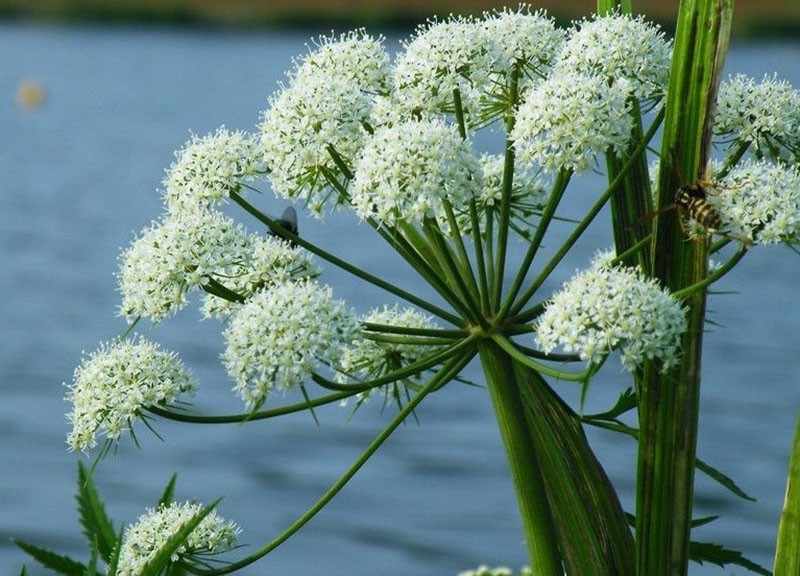 The poisonous milestone or water hemlock is one of the most dangerous plants on the planet, belonging to the Umbrella family. It grows in damp places – near water bodies, in swampy areas. It can be recognized by its small, greenish or white, umbrella-shaped inflorescences..

All parts of the water hemlock contain cytoxin, an extremely dangerous substance that causes seizures. The maximum amount of this toxin is concentrated in the roots of the milestone.

Poisoning with this plant is accompanied by severe vomiting, convulsions, and cardiac depression. Without emergency medical care, intoxication leads to respiratory and heart failure and death.. 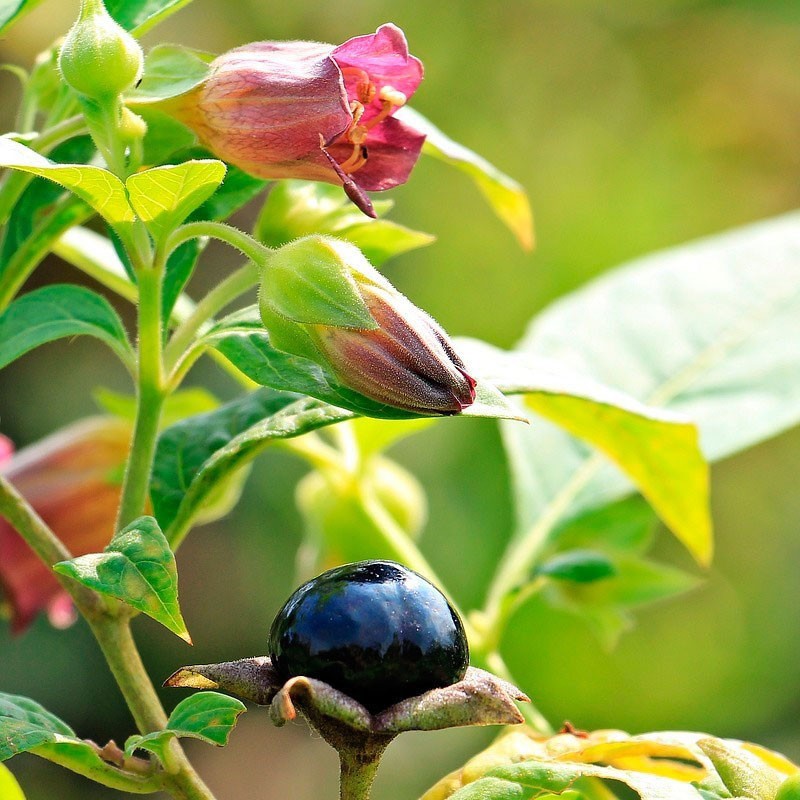 Belladonna or Krasavka vulgaris is a poisonous plant that is most often found in the southern regions of Russia. The main signs of a poisonous plant are an abundance of pink flowers and purple-black berries, abundantly covering the shrub.

Belladonna juice and berries contain atropine, an alkaloid that causes heart palpitations, burning sensation and increased dry mouth. Atroopine is a hallucinogen, it provokes the development of visual and auditory hallucinations, delirium.

Without urgent medical attention, a person develops convulsions, loss of orientation in space and death. Eating 10 belladonna berries is enough for a lethal outcome.. 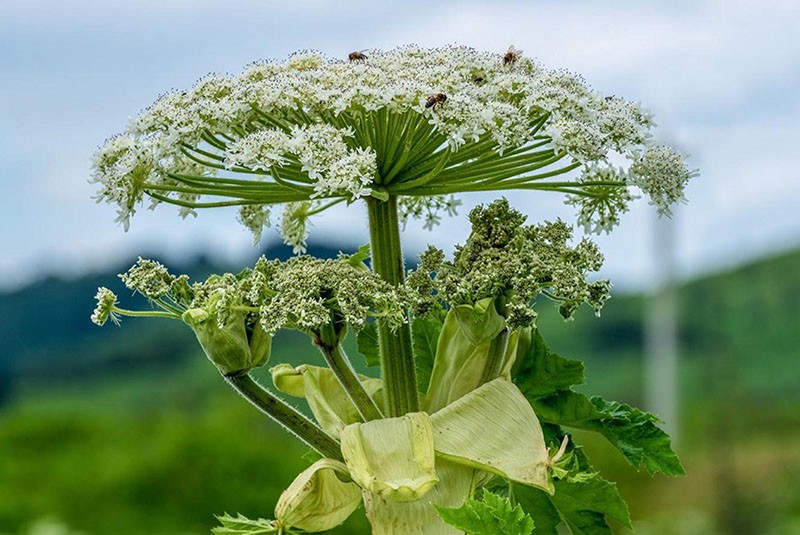 The cow parsnip is a plant from the Umbrella family, distinguished by its gigantic size, reaching 2.5-3.5 m in height. It is found almost everywhere – along highways, in fields, meadows. Summer residents consider it a malicious weed, because thickets of hogweed often appear in the garden or in the garden.

The cow parsnip can be identified by its thick, ribbed stem and greenish-yellow flowers, collected in the shape of umbrellas. All parts of the hogweed contain a huge amount of alocaloids..

In case of accidental contact with the skin or mucous tissues, these substances cause painful skin burns that resemble sunburn. Over time, ulcers, blisters and wounds form at the site of injury. 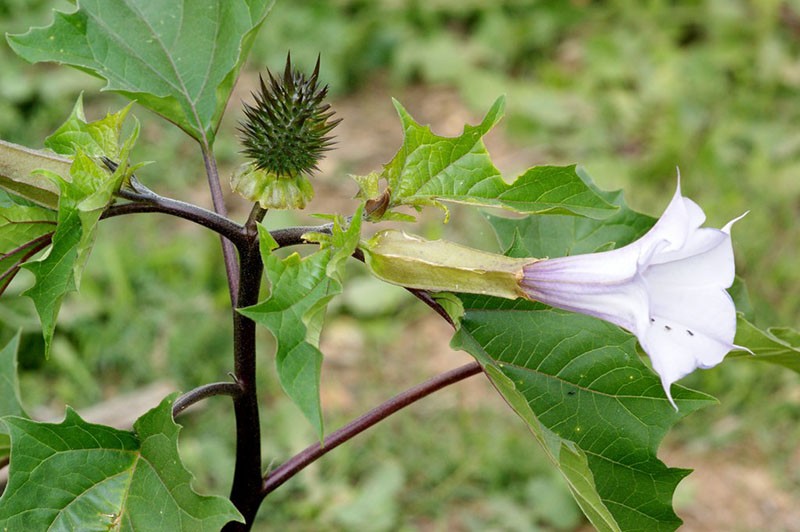 Among the poisonous herbs and plants of Russia, one of the main places is given to common dope, which is most often found in the southern regions of the country. This flowering ornamental plant can be identified by its specific fruits – thorny capsules filled with small black seeds.

The composition of vegetable juice and flowers of dope ordinary contains a huge amount of alkaloids, which provoke heart palpitations, loss of orientation in space, delirium. In the most severe cases, the death of a poisoned person or animal occurs. 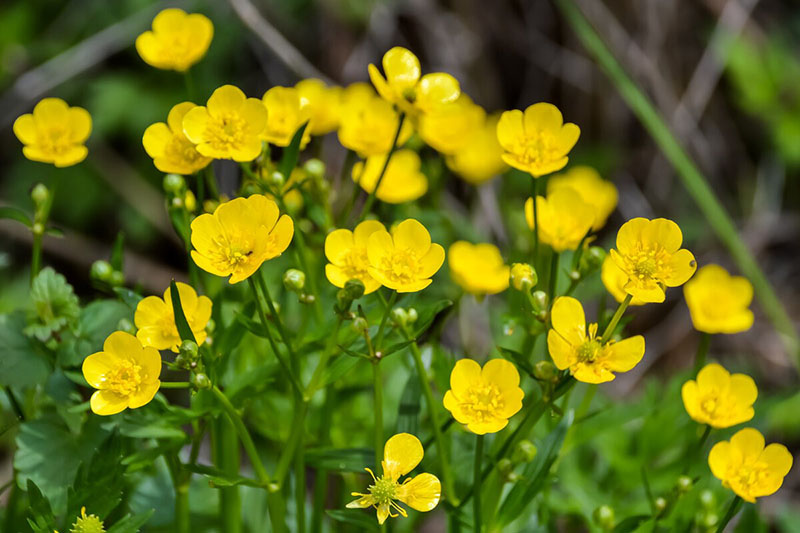 Many varieties of buttercup are poisonous plants. This pretty flower with yellow petals can be seen in wetlands and wooded areas. Despite its visual appeal, buttercup contains juice that causes burns and allergic skin reactions..

In case of accidental contact with the eye cornea, buttercup juice causes temporary visual impairment. That is why this plant is often called “night blindness”. 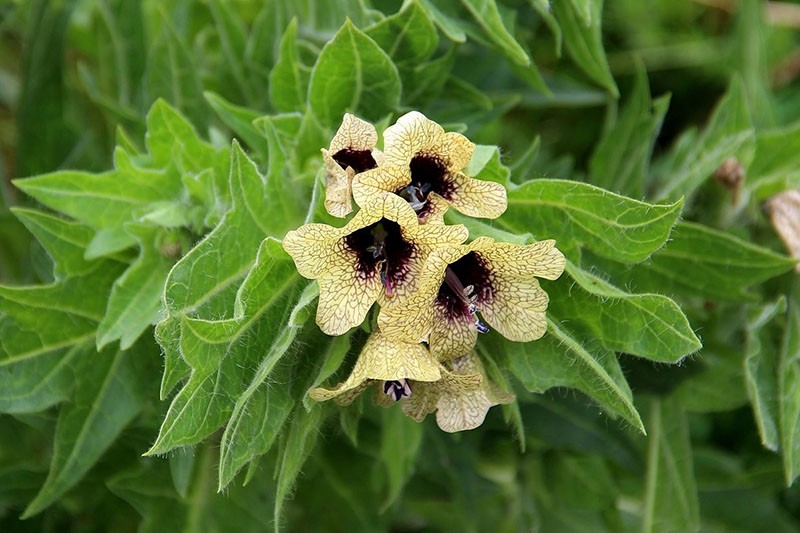 Belena has a powerful psychotropic effect, being a dangerous hallucinogen. All parts of the plant contain toxic substances, but most of them are in the seeds and roots.. 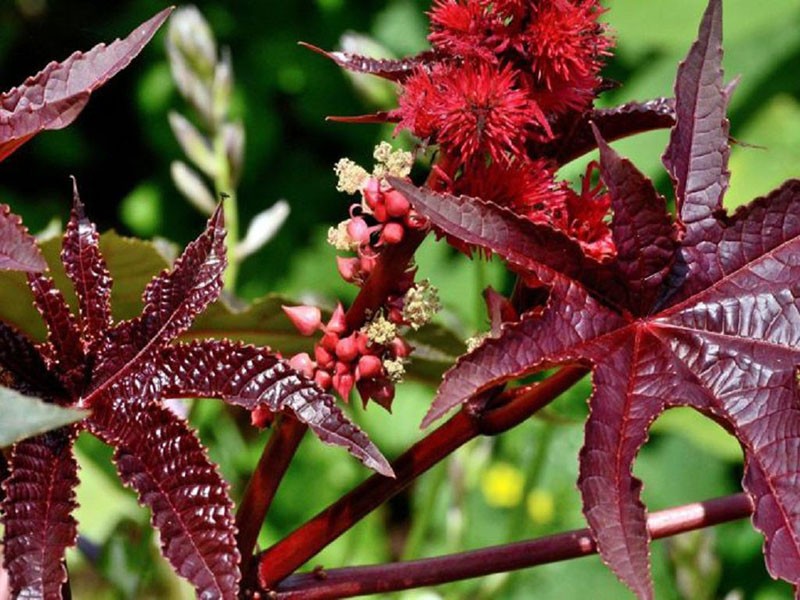 Castor bean is a plant that is cultivated as an ornamental and oilseed crop. Thanks to the large and spectacular burgundy-colored leaf plates, castor bean is used in landscape design. Castor oil is produced from its seeds after long-term processing..

Castor bean seeds contain ricin, a toxic substance that causes severe poisoning if used accidentally. This plant is included in the list of the most poisonous, since there is no antidote for ricin..

If the seeds are accidentally consumed, ricin leads to the instant destruction of the most important protein compounds in the body. Even with timely medical care, it is impossible to completely restore health, since the destruction of proteins is irreversible.. 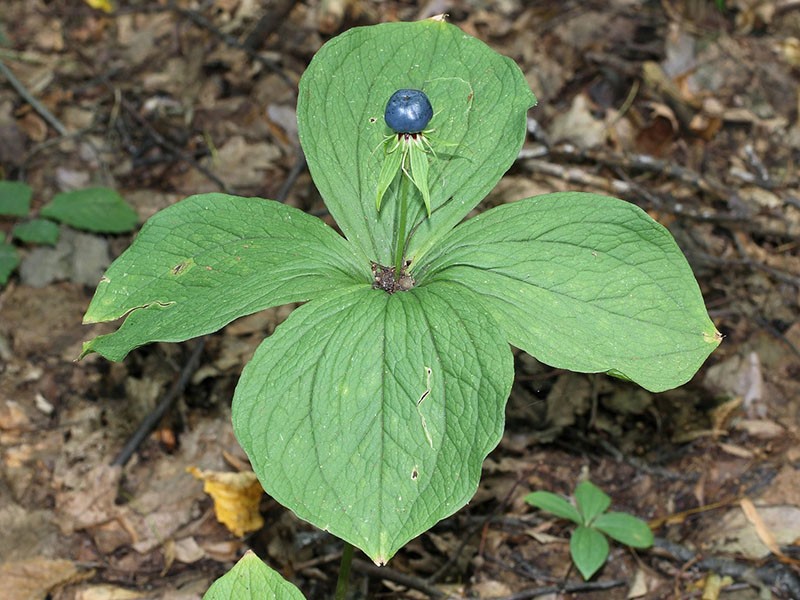 The four-leafed raven eye is a plant that grows in the territory of European countries and Siberia. Outwardly, it looks like a large spreading shrub with bright blue berries. They are the ones that pose the greatest danger to human and animal health.. 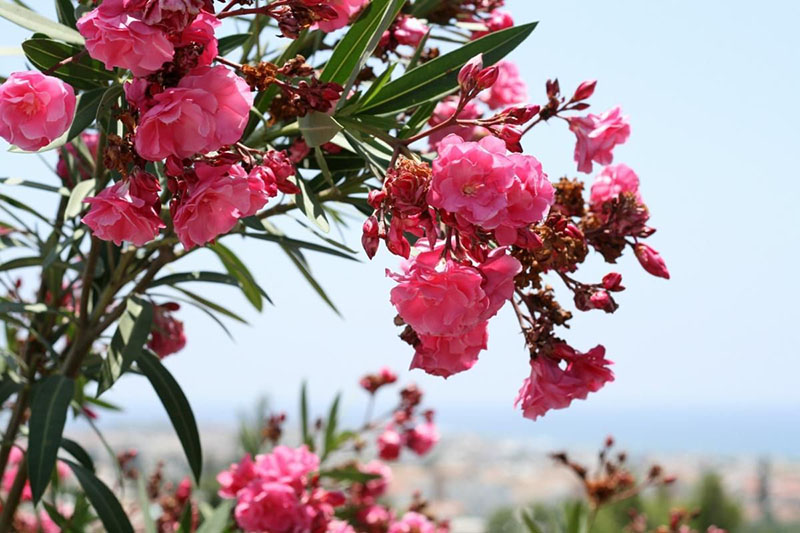 In natural conditions, oleander is found in regions with tropical and subtropical climates. Russian gardeners often grow a slender and spectacular plant to decorate landscape design, unaware of its poisonous qualities..

Oleander attracts attention with lush white or pink inflorescences with a pleasant jasmine scent. The flowers of the poisonous plant contain an increased concentration of cardiac glycosides, which disrupt the heart rhythm, causing bouts of vomiting, migraines, leading to clinical death. 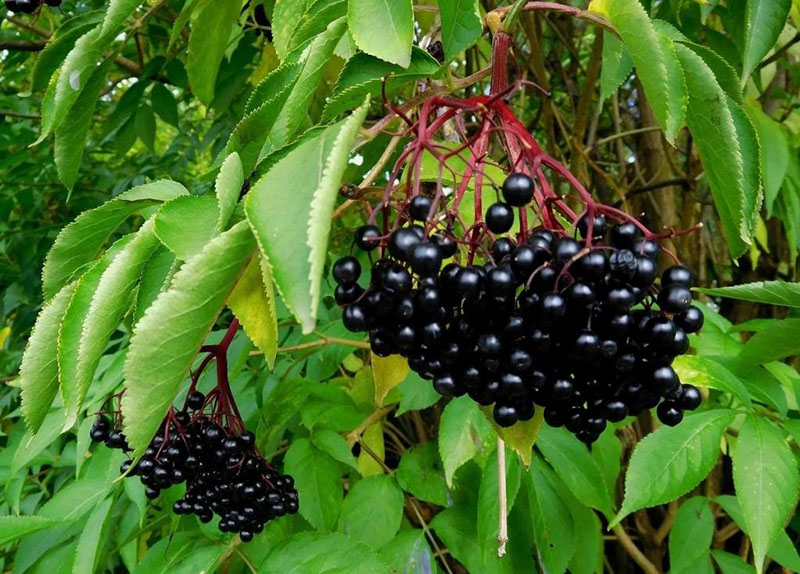 Common wolfberry, which is also called “wolf bast”, is a frequent “guest” in central Russia. It is a lush shrub up to 140-160 cm high.In the period of fruiting, the plant is covered with rounded bright red fruits with shiny, smooth skin.

The fruits of the wolfberry are extremely poisonous. Only 5-8 fetuses can be fatal.

The main signs of poisoning:

Not only the fruits, but also the sap of the plant, are a serious health hazard. Inadvertent contact with the skin causes painful burns, which eventually turn into wounds and ulcers..

Elderberry is a plant with poisonous fruits. Toxic substances are found not only in unripe berries of black and red elderberry, but also in other parts of the shrub – leaves, shoots, inflorescences.

At the same time, ripe fruits are completely safe. They are widely used for culinary purposes for making jams, preserves, pie fillings and rolls..

With the onset of summer, outdoor recreation, trips to the forest and to the country house, where an abundance of herbs, flowers and shrubs grow, becomes especially relevant. That is why the characteristics of poisonous plants should be known to every person. This will help protect yourself and your loved ones from poisoning and serious consequences..