Tips for allergy sufferers: what to do when ragweed blooms 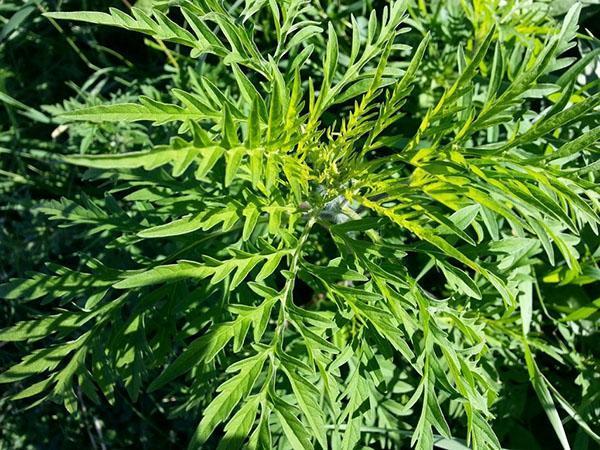 Summer is the hardest time for allergy sufferers. It is especially hard for them when ragweed blooms. Allergy manifestations can torment a person prone to it for a season so that health problems will be remembered until next year. If you or your loved ones do not feel well during the flowering of herbs, it is worth knowing better what it is – ragweed..

Description of the plant, species, origin 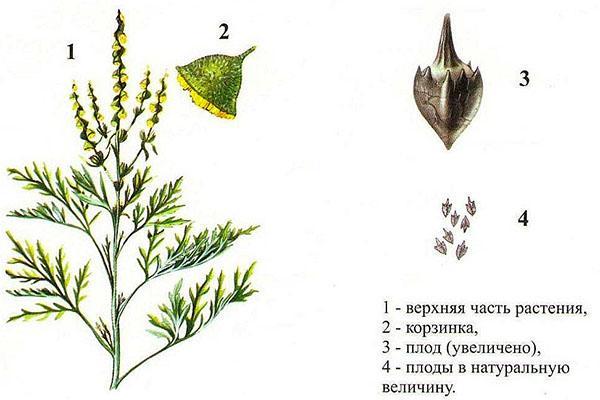 This plant belongs to the genus of herbs of the Astrovye family. Originally from North America, from where it spread to almost the whole world. The genus includes about 50 species. Of these, only three are found in Russia:

Ambrosia is ubiquitous in the Volga region, in the south of Russia and in the Crimea. In recent years, due to the warming of the climate, its seeds began to ripen even in the middle lane..

The name of the plant comes from the Greek word ambrosia – this is how the food of the gods and the incense with which they rubbed was called in mythology.

Ambrosia grows up to two meters in height, the root goes into the ground to a depth of four meters. Leaves are pinnately dissected, light green, younger ones are darker. Covered with short bristly hairs. Ambrosia reproduces only generatively. Each adult plant is capable of producing up to 150 thousand seeds per season..

In ragweed, seeds germinate at any stage of maturity – biological, waxy and milky. Freshly harvested seeds need a dormant period of up to 4-6 months, after which they remain viable for up to 40 years. 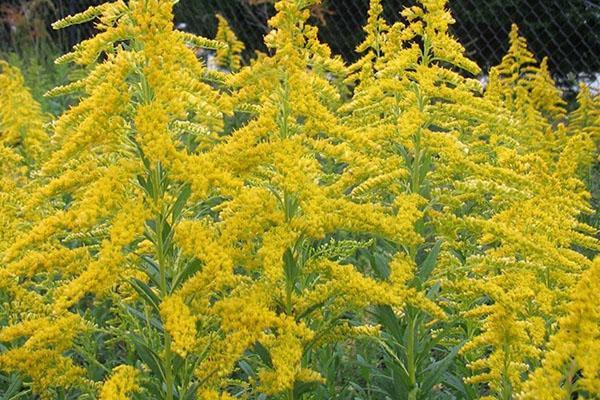 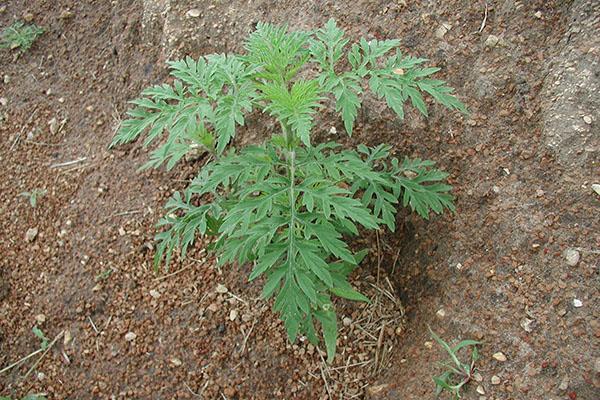 The plant belongs to the highly undesirable quarantine weeds, and there is every reason for this..

As soon as one ragweed sprout appears, in a few years the evil weed will cover everything with a solid carpet. This is facilitated by the exceptionally long root, which draws water from such depths where cultivated plants and wild plants do not reach..

As a result of field experiments, scientists have established: in order to grow its own weight of one kilogram, ragweed consumes almost a ton of water, 1.5 kg of phosphorus and 15 kg of nitrogen. In those places where this weed grew violently, the soil for a long time becomes unsuitable for cultivation.. 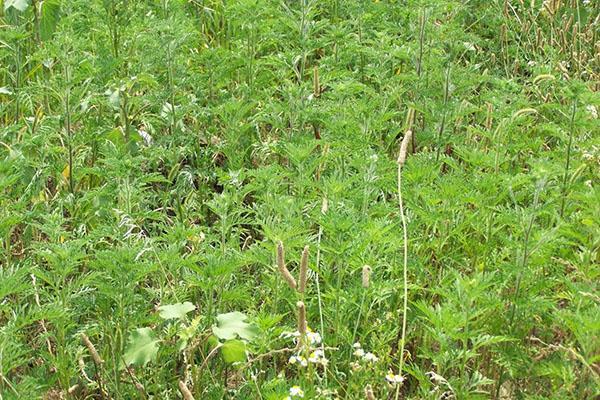 The ragweed sprouts that have broken through in the spring quickly build up the green mass and shade the cultivated plants, taking away all the nutrients and water along the way. Crops sharply reduce the yield in those places where ragweed has settled. The photo shows how quickly the plant conquers space.. 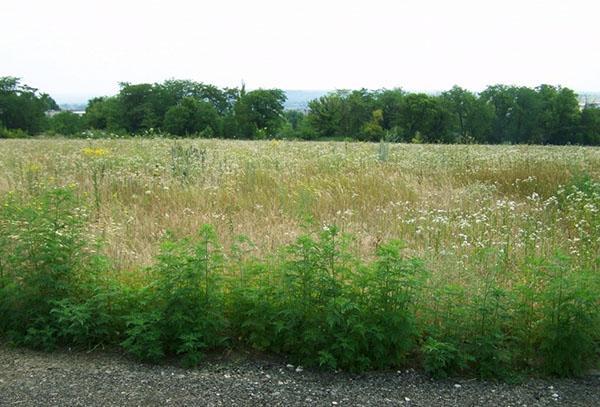 In the same way, ragweed displaces all meadow grasses. If it gets into hay, its fodder quality is greatly deteriorated. Replacing honey plants, a weed can significantly shake the biological balance in a given biocenosis.

The taste of milk quickly deteriorates, it develops an unpleasant pungent odor and aftertaste if the animal eats a blooming ragweed.

According to the firm belief of allergists, ragweed pollen is one of the most powerful allergens, causing the so-called hay fever – a painful reaction of the body to the ingress of pollen into the respiratory tract. In addition to the development of an allergic reaction, it can provoke the development of asthma. A dangerous form of allergy is anaphylactic shock and the likelihood of subsequent development of pulmonary and cerebral edema..

A distinctive feature of pollen is considered to be the property of causing allergies even in healthy people who have never suffered from it. Allergies acquired in this way will manifest themselves in every summer period..

At a time when ragweed blooms, it is necessary to know the symptoms of the disease and take appropriate measures for treatment..

How to deal with allergies 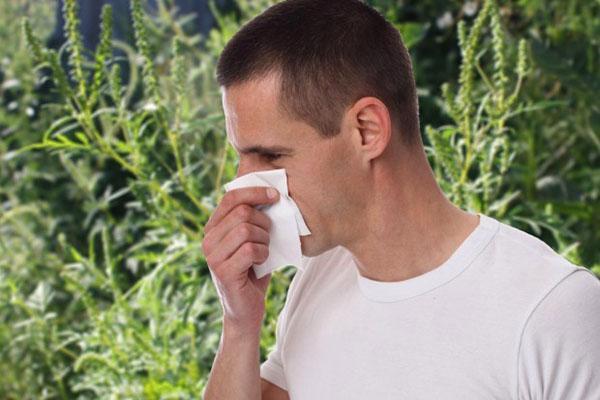 More than half of humanity currently suffers from allergies, and the number of allergy sufferers is only increasing every year. Therefore, even healthy people need to know the manifestations of allergies..

Symptoms of the disease 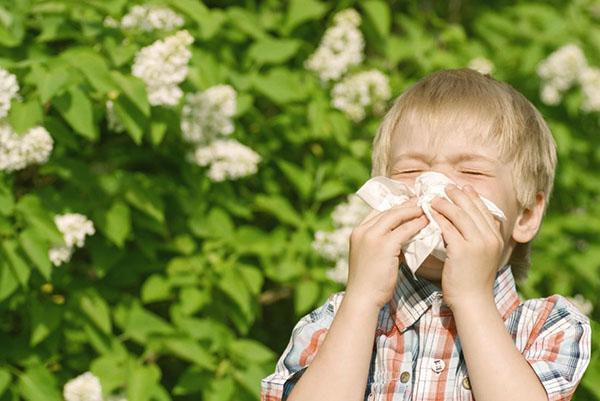 When pollen comes into contact with the skin or mucous membranes in adults susceptible to hay fever, the following symptoms of ragweed allergy appear:

All this leads to the emergence of secondary factors of the disease. These include:

In a person with an allergy to ragweed, the eyes are the first to suffer..

When a runny nose and cough appears, make sure that this is a manifestation of hay fever, and not a cold..

When these symptoms appear, antihistamines are taken – anti-allergic drugs. The list of the most popular and effective drugs contains the following drugs:

These drugs are available without a prescription, but it is best to consult with your doctor first so that he or she selects the most appropriate medication and dose..

The best remedy for the annoying symptoms of allergy every year is injections against the reaction. As a result of therapy, the body gets used to the stimulus and does not react so painfully when ragweed blooms. The method is based on the regular administration of small doses of the allergen intravenously to the patient.. 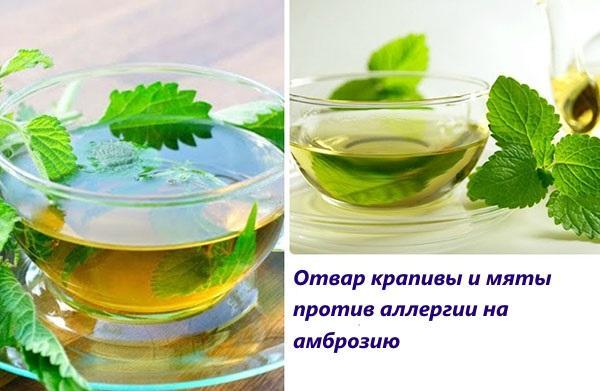 In the question of how to treat an allergy to ragweed, recipes of traditional medicine will help. Decoctions and herbal infusions do not have such a pronounced effect as when using medicines, but they do not affect the liver and kidneys. With the next outbreak of hay fever, try the following folk remedies:

All of these recipes contain many vitamins and other useful substances. If they cannot alleviate suffering, then they will definitely strengthen the body and increase immunity..

Even before the onset of symptoms of an allergy to ragweed, you should attend to preventive measures. They will significantly reduce discomfort..

One of the most effective preventive measures is the correct diet. In the summertime, skip the following foods:

Some of the above foods contain pollen from the Asteraceae family. When they are used, complications may develop up to anaphylactic shock..

When ragweed blooms, doctors advise all allergy sufferers to follow these simple rules:

Prevention of ragweed allergy is one of the most effective measures to protect your health. To avoid dangerous consequences, consult a doctor if the condition worsens..

Breeding stages of ragweed and the reasons for vitality 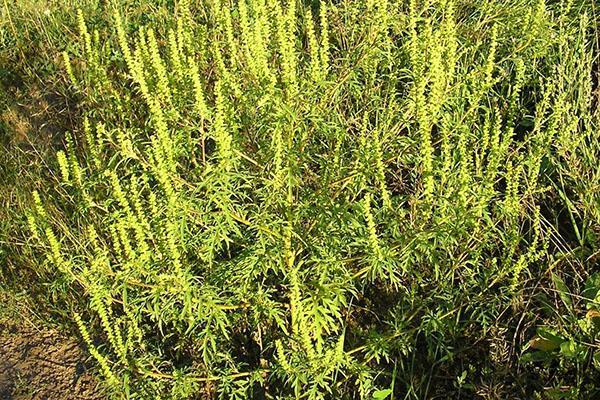 Ambrosia is most often carried to new places by the wheels of cars. As soon as one or two seeds sprout on the side of the road, a green border of this plant appears along it. If you do not take any measures, in a few years the whole field along the road will be filled with an insidious weed. It will turn bright green where other plants begin to wither and degenerate..

Winds, on the wheels of cars and animal hair, ragweed seeds will continue their journey through fields, parks and gardens, generously sowing pollen.

There are several reasons for the phenomenal survivability of ragweed:

Russian scientists carried out experiments on populating plantings with a leaf beetle imported from North America, where ragweed is its only food. Until these experiments were successful. 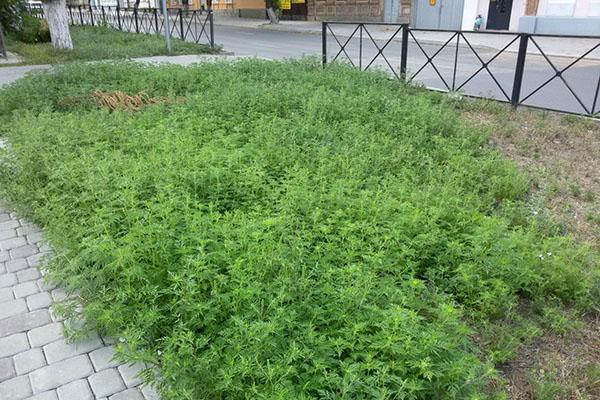 It is possible to defeat a tenacious weed only in one case – if you apply all possible measures for destruction in the complex and go all the way until there is not a single plant left in a single territory. Similar actions should be applied in all regions where climatic conditions allow seeds to germinate. The most effective measures to combat a pest plant are:

Scientists have developed special mixtures of perennial legumes and lawn grasses that grow quickly and amicably and suppress ragweed. The mixture includes awnless rump, rootless wheatgrass, foxtail, fescue and others. In the southern regions, experiments were successfully carried out on sowing Sarepta mustard, which completely cleared the experimental fields from the green pest.

Knowing what ragweed looks like, applying all the necessary methods to combat it and using preventive measures to protect against allergies, you will be able to significantly reduce the manifestations of the disease and protect yourself and your loved ones.