Be sure to plant Irbitsky potatoes on the site 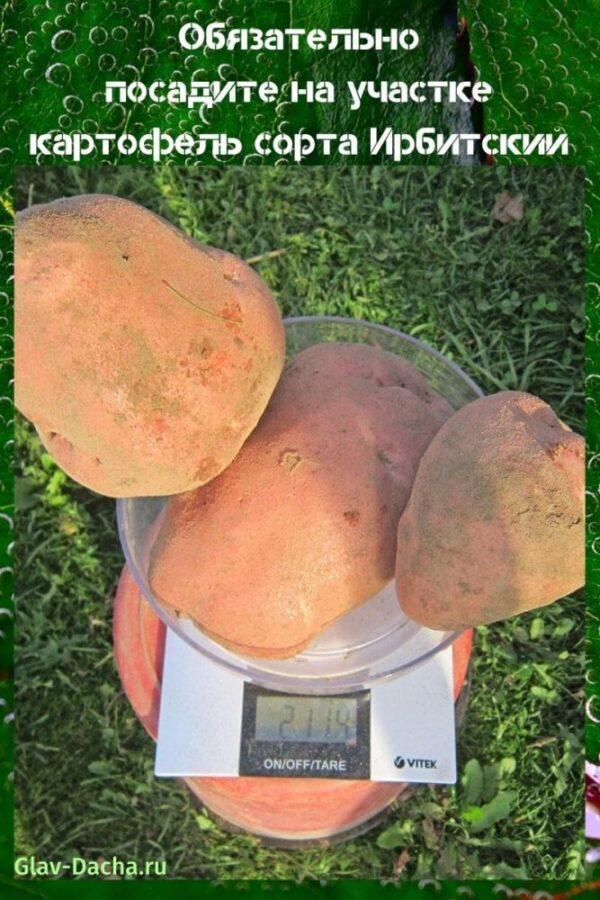 High yield, large-fruited and resistance to most nightshade diseases. For these and other features, the Irbitsky potato variety, bred in 2009, won the general love of gardeners. It is also unpretentious in cultivation. Able to adapt to various weather conditions. Differs in excellent taste – has a moderate potato flavor. It has a very pleasant rich aroma due to its low sugar content. Root vegetables are not boiled during cooking. With all this in mind, every farmer will want to know a little more about this variety.. 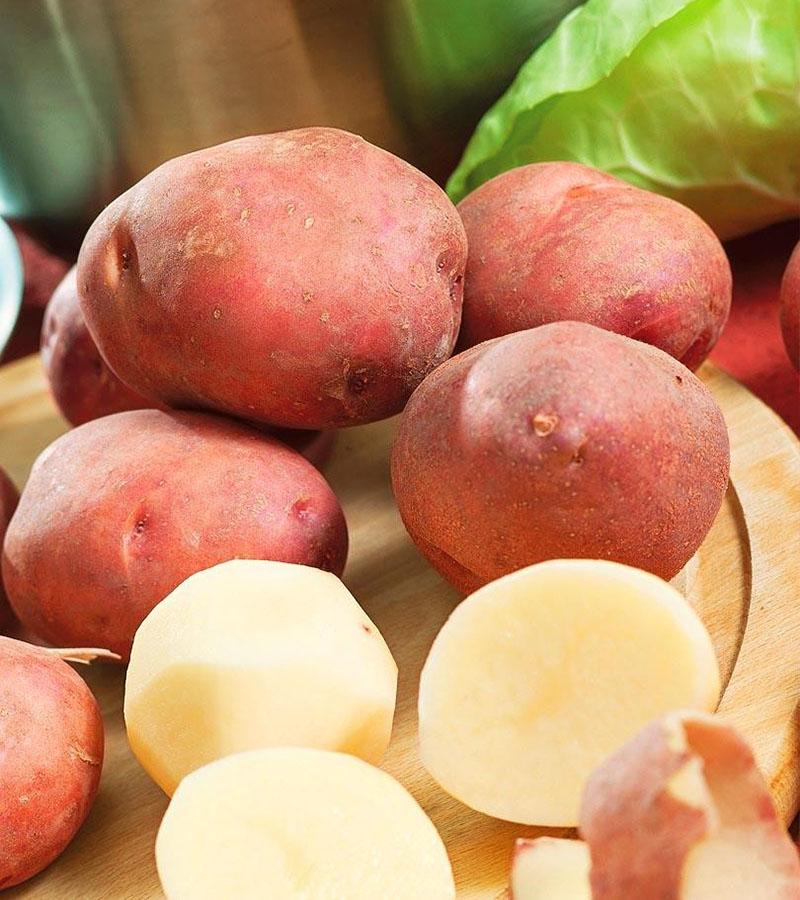 Description of the Irbitsky potato variety should be started with the period of technical ripening of the tubers. From planting to the first harvest, it takes 65-70 days, and in cooler climates – 90 days. For this reason, it is classified as mid-season. The culture is intended for cultivation in the West Siberian and Volga-Vyatka regions. In addition, widespread in Moldova and Ukraine. 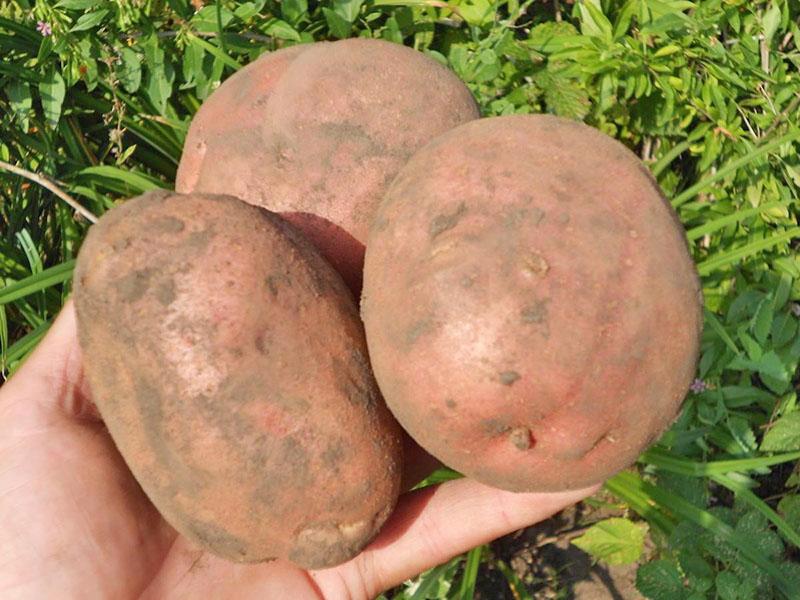 The characteristic of the Irbitsky potato variety also includes a detailed description of the root crop, which has: 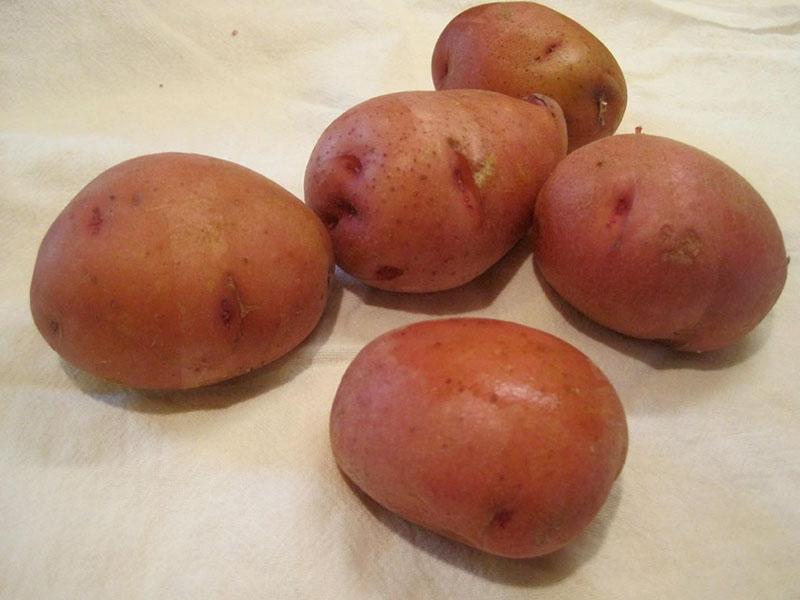 The bush of the plant has semi-erect stems of medium height (50-60 cm). The unpaired foliage of the crop is larger than average. Wavy at the edges. Has a dark green color. During flowering, which is very amicable, large buds acquire a pink-purple color – anthocyanin. Then, instead of flowers, fruits appear (2 cm in diameter) of a malachite shade, however, they are poisonous and unsuitable for food. 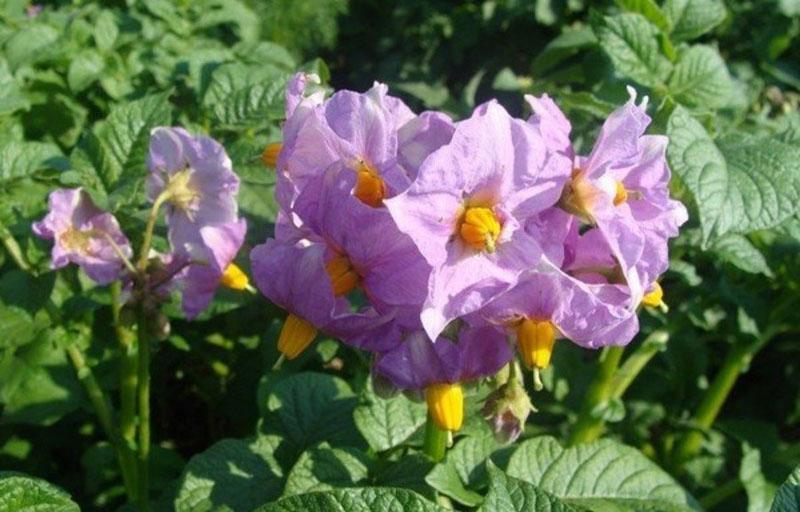 Particular attention must be paid to the technical characteristics of the variety. Tubers are valued for their unique keeping quality, which exceeds 97%. Therefore, potatoes can be stored for the longest possible period of time. However, such a result can be obtained only under the condition of the correct content: temperature regime and the choice of the optimal place. The culture is also resistant to mechanical damage, which allows farmers to successfully transport root crops.

Other advantages and disadvantages 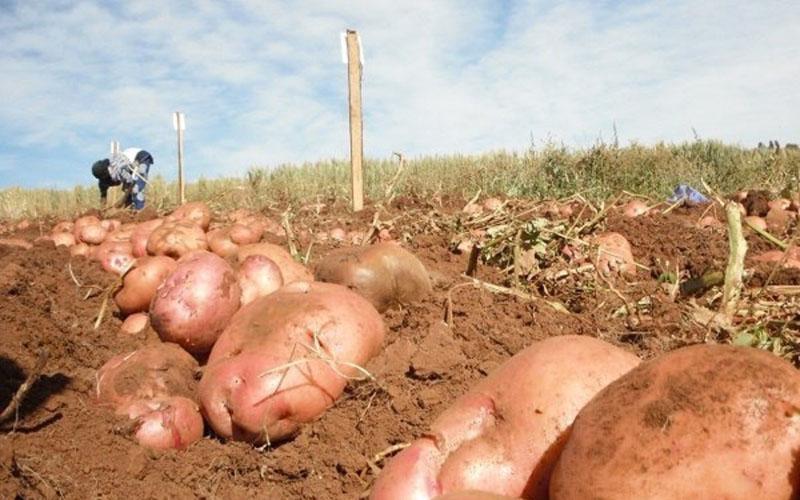 It should be noted that Irbit seed potatoes are excellent drought tolerant. At the same time, it is undemanding to the choice of soils. However, it feels perfect on soils where winter crops, cereals and legumes, as well as flax, used to grow. For sandy soil types, the variety is also suitable, only before planting it, lupine is first sown.

Along with this, the variety has excellent immunity to common nightshade diseases:

Although there are no obvious shortcomings, nevertheless, an elite variety, in the absence of care or violations of agricultural practices, can chop or give a weak harvest..

In addition, Irbitsky potatoes are famous for their fairly stable and high yield, they are not prone to degeneration. When planting, root crops can be cut, and this will not affect its fertility in any way. Among other things, small tubers are rarely found during cultivation.. 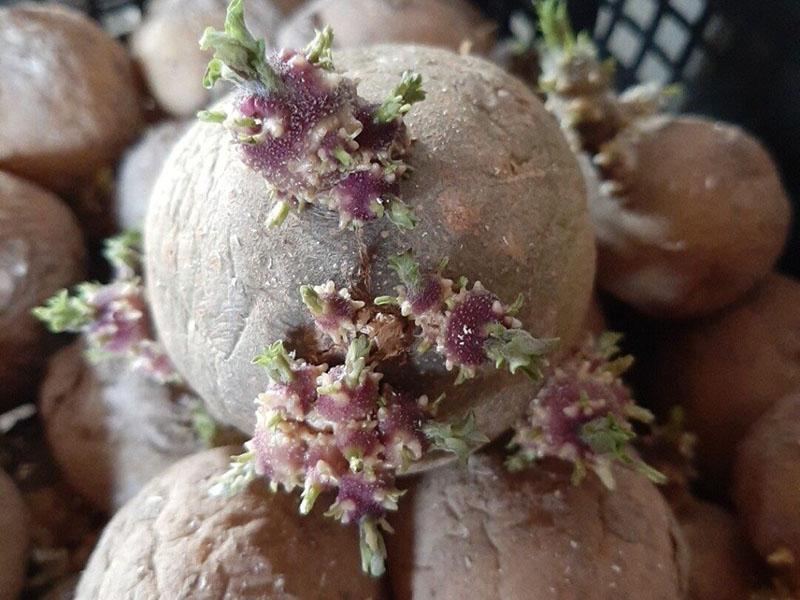 Root crops are taken out of storage 3 weeks before the start of garden work. The boxes are left in a warm and bright place for germination. Then the site is prepared by fertilizing the land with organic matter or other complex fertilizers. Very large tubers are cut in half. 3 eyes are left on each slice.

Planting Irbitsky potatoes is carried out in May, observing all the rules of agricultural technology:

The correct timing of planting potatoes. The optimum air temperature for this procedure should be within + 7 … + 9˚С. Nevertheless, care must be taken to ensure that the ground is sufficiently warmed up. Otherwise, it can lead to decay of root crops.. 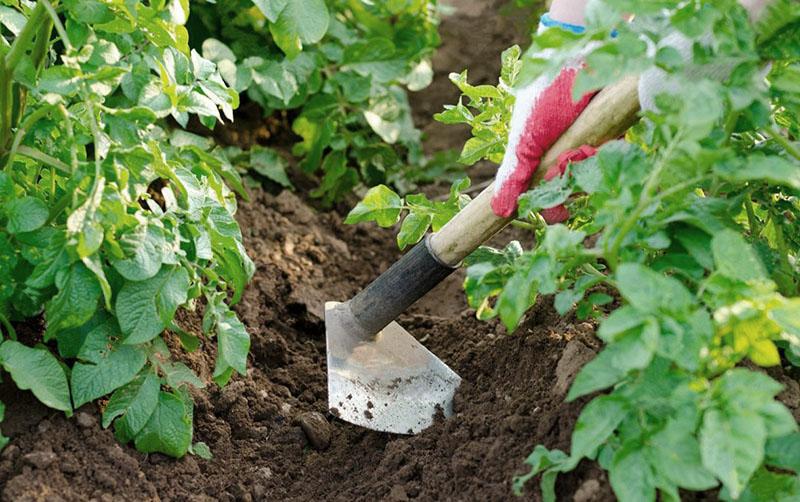 The first loosening is performed 2 weeks after planting at a depth of 10-12 cm. Weeds must be removed from the site, otherwise this vegetation will not leave the culture of nutrients in the soil. Hilling of bushes is performed when the sprouts stretch up to 15-17 cm. In this case, the soil ridge is formed at least 20 cm in height. A repeated event is planned before closing the tops in order to fix the shoots as much as possible.. 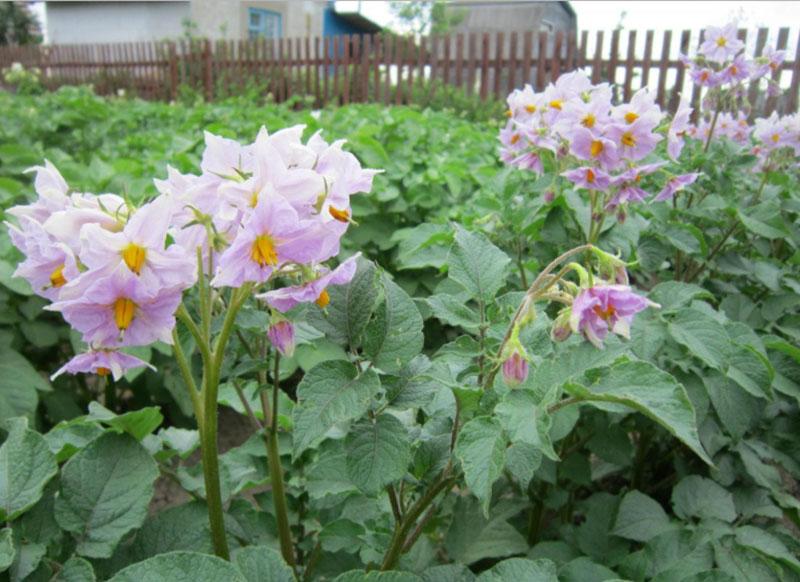 Since the Irbitsky potato variety is mostly intended for cultivation in the northern regions, additional watering will not interfere with planting. Breeders advise to carry out water procedures 3 times per season. This is especially true for areas with an arid climate. Watering is recommended to be combined with systematic feeding. Fertilizers are applied in the process of planting potatoes.

For the full development of tubers, add: 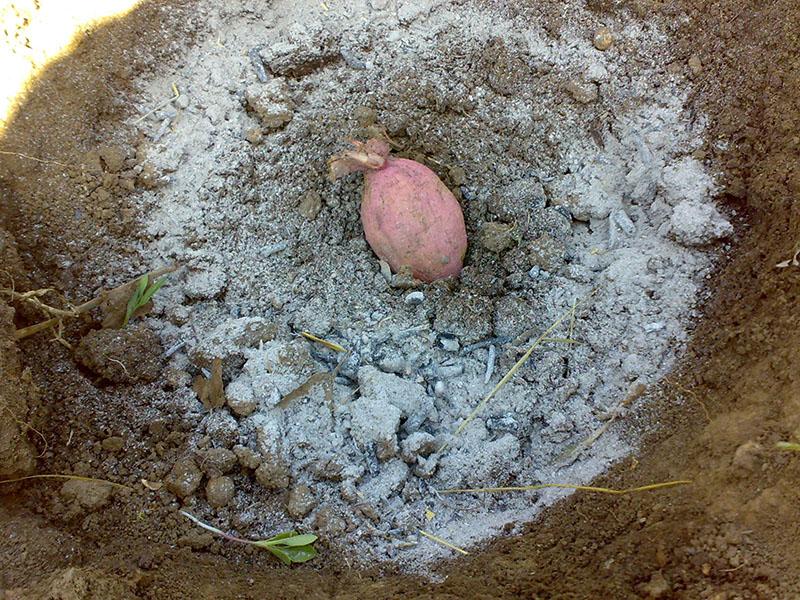 During the entire growing season, additional fertilizing is used. The infusion of chicken droppings turned out to be very effective. The feces are diluted at a ratio of 2:30. Nevertheless, for better dissolution, the feces of birds are poured with a small amount of liquid. As soon as the mass softens within 48 hours, the concentrate is brought to the required volume. The infusion is applied only to moist soil so as not to burn the root system.

But after harvesting for digging, the garden is fertilized (by 1 m2):

To get large root crops and a bountiful harvest, it is necessary to provide the culture with an acidic environment. In alkaline soils, potatoes give poor germination and have poor tuberization. 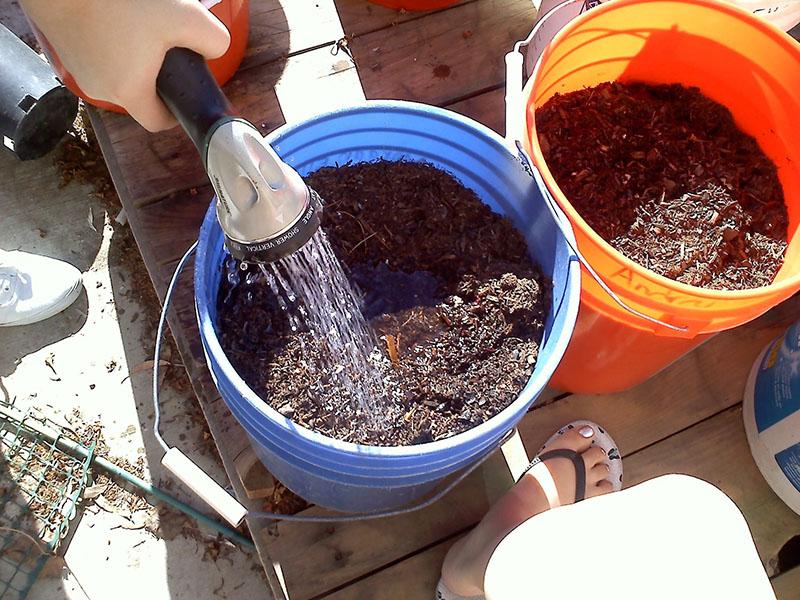 When growing the Irbitsky variety, several more dressings are practiced. During the formation of buds, the bushes are watered with a diluted infusion of chicken droppings or mullein (1 l / bush). With the active flowering of nightshades, the beds are crushed with a mixture of wood ash (4 tbsp. L.) And potassium sulfate (1.5 tbsp. L.). The dosage is indicated per square meter. 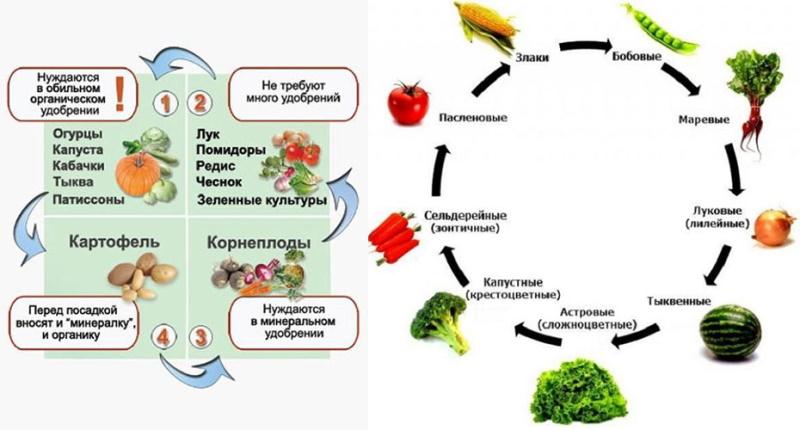 The alternation of crops on the site provides a moderate depletion of fertile soil. Each plant species extracts a specific type of nutrient from the soil. Moreover, this technique makes it possible to protect potatoes from pests, as well as infectious diseases. In this regard, farmers are advised to use one of the crop rotation programs.

Unsuitable precursors of potatoes are: 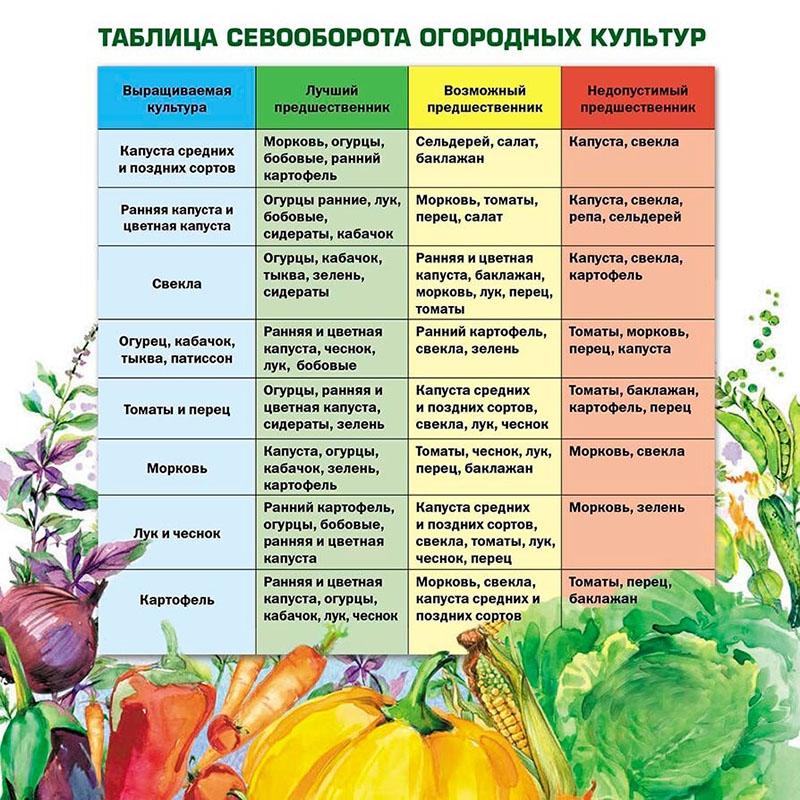 If the listed crops grew on the site, then representatives of the Solanaceae family are planted on this site only for 2-3 years. After harvesting, they must sow sederats, which are mowed before wintering, but before flowering begins. The resulting green mass is buried in the ground by plowing. 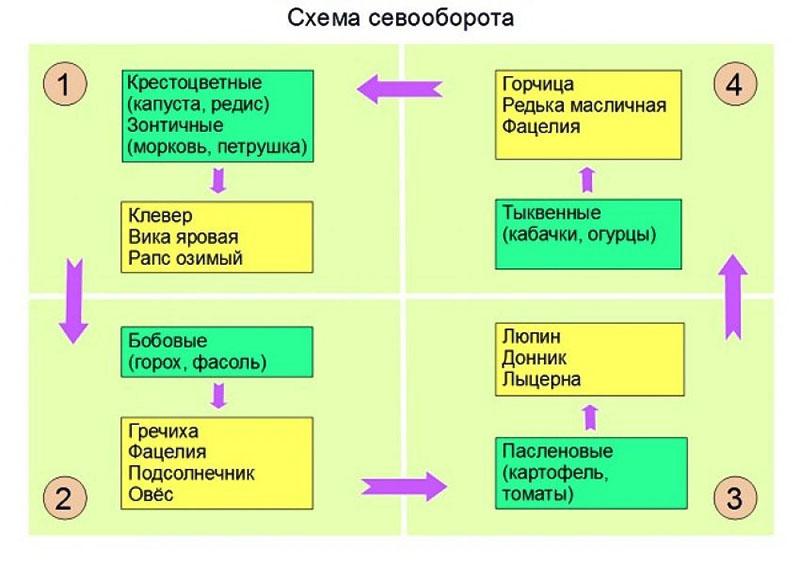 There is a two- and three-year crop rotation system. In one case, the site is divided into 2-3 zones, and in the other – into 4. In the first case, vegetables and herbs are planted along with the potatoes, and in the second, legumes are also added. Then each year the location of these crops is changed..

Subject to all the rules of agricultural technology for growing potato varieties, the Irbit farmer will receive a rich harvest in August-September.