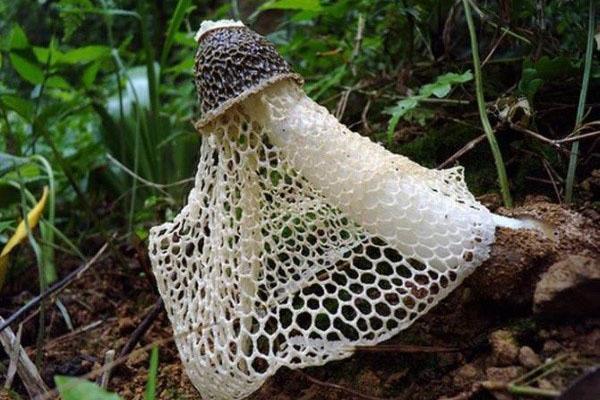 If you think that a mushroom should have a round cap on a thick or thin stem and a brownish-yellow or white color of the mushroom body, then this article will at least surprise you. It turns out that Mother Nature has a very rich imagination, otherwise, where would the unusual edible mushrooms come from? Amazing shapes that resemble alien creatures, or simply shapeless masses, screaming coloring, strange hats and legs, and generally the absence of such – these are the specimens that will be discussed today. So, we bring to your attention the strangest mushrooms on our planet that can be eaten, despite their sometimes frightening appearance..

Read: mushrooms are false and edible with a photo! 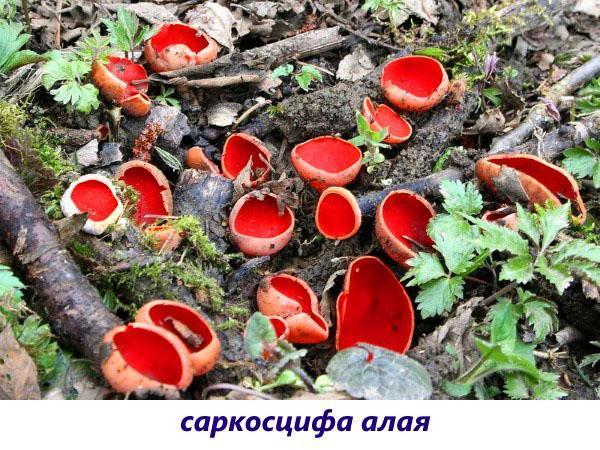 In early spring, in almost all countries and contingents, whole families of scarlet sarcoscifs grow on fallen trees. A deeply concave cap is attached to a low whitish leg; it looks more like a bowl in shape. Inside it is bright red, while the outer “walls” have a lighter shade. Some mushroom pickers claim that the pleasantly smelling, elastic flesh of sarcoscifi is quite edible, but most still bypass these mushrooms, since they are too small, and besides, they are rather tough..

For its concave cap and bright color, the mushroom is also called the scarlet elf cup. It is noteworthy that it grows only in ecologically clean areas, avoiding forest belts near large roads and cities, where the air is polluted by all kinds of emissions.. 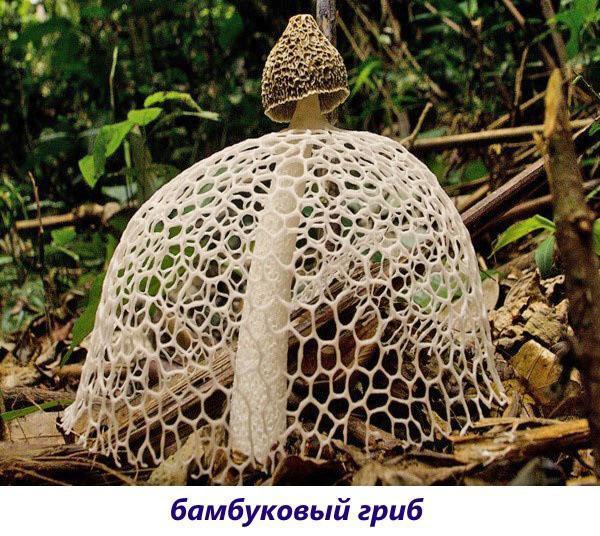 If some mushrooms have rings on their legs, then a bamboo mushroom has a whole skirt made of lace, and it is very long, almost to the very ground. The color is most often white, but there are instances in yellow or pink skirts. It is noteworthy that initially the mushroom has the shape of an egg, from which a high, up to 25 cm, white leg later emerges with a small convex cap, painted in brown. 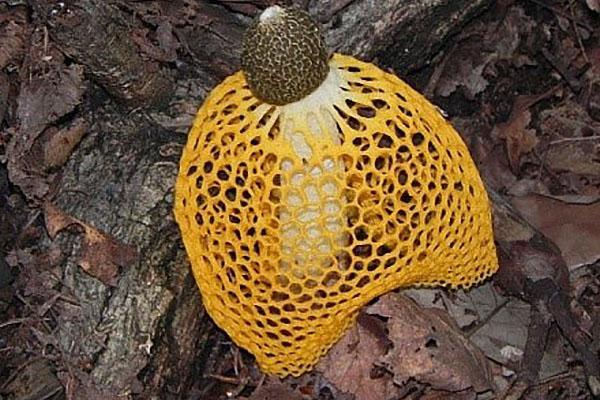 The surface of the cap is mesh, covered with an unpleasant smelling greenish mucus that attracts insects. In Chinese cuisine, bamboo mushroom is considered a delicacy for its tender and crunchy texture.. 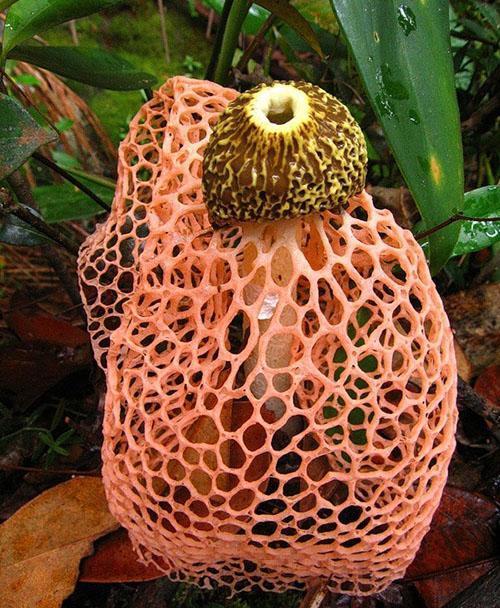 The Latin name of the mushroom sounds like phallus Hindus, but most often it occurs as: 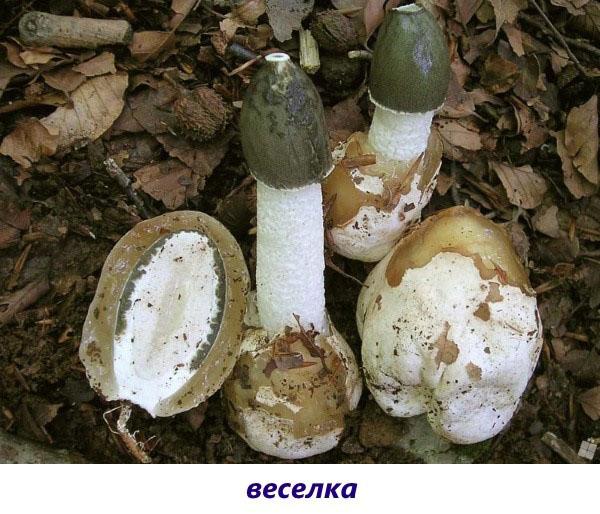 Another type of phallus is known as veselka. It also develops: first, the mushroom body has the shape of an egg, from which the mushroom itself later sprouts on a high stem with a small convex olive-brown cap. However, the growth rate of the veselka is amazing: it only takes half an hour for the leg to completely come out of the egg..

The hat is covered with a slimy coating and smells disgusting, attracting insects. They also carry spores throughout the forest, while simultaneously clearing mucus. Without it, clearly visible cells appear on the hat.

Veselka is an edible unusual mushroom, which also has aphrodisiac properties, but only if you use young specimens (eggs) and remove the shell from them. 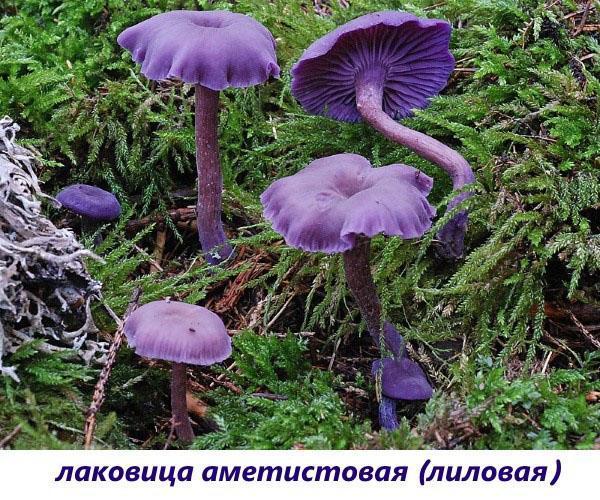 At the end of summer, in the forests, in wet glades, amethyst varnish (aka lilac) grows – small mushrooms on a thin stem with an open hat. The mushroom body is completely lilac-purple, even the plates under the cap, which smoothly descend to the stem, the only thing is that in old specimens they fade. Edible delicate pulp is also purple, with a pleasant taste and smell.

The poisonous mushroom mycena is very similar to old varnishes. It can be distinguished by the characteristic unpleasant smell of radish and pure white plates (they are slightly purple in amethyst varnish). 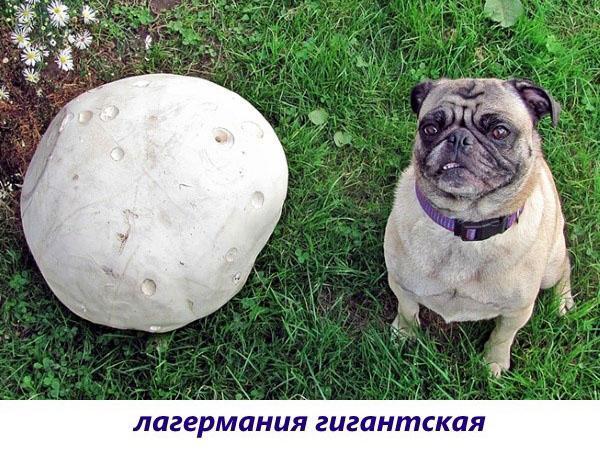 One of the largest mushrooms in the world is a representative of the champignon family, Lagermania gigantea. This unique mushroom can often be found in the steppes and meadows of central Russia. It has no legs, and the mushroom body itself looks like a huge round egg lost by an extinct dinosaur, or someone’s head, for which the mushroom is popularly called the “bighead”. And because the bigheads appear in the rainy season, they are called raincoats..

The size of the head inspires respect: there are specimens with a diameter of more than 0.5 m, and this is given the fact that they are edible. That’s really a catch so a catch! It is not difficult to determine the maturity of the mushroom: young bigheads should be white, with the same color flesh, in old ones the shell darkens, and the flesh first becomes green-yellow, and at the end brownish.

You cannot eat old bigheads – their pulp contains a large amount of toxins, which leads to poisoning, while the symptoms do not appear immediately, but only on the second day. 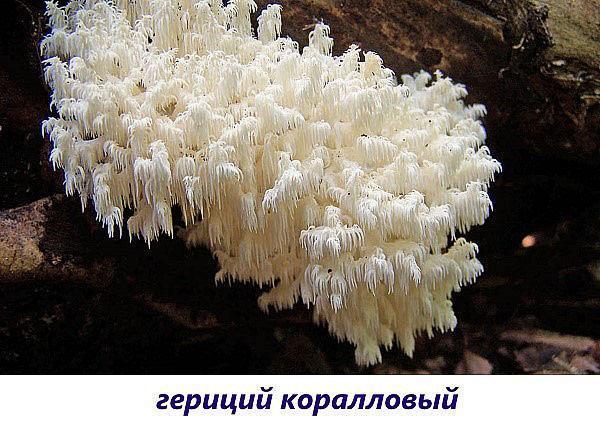 Among the unusual edible mushrooms, there is one species that can never be confused with others. Those like him simply do not exist in nature – it is coral gericium. The mushroom body is simply a huge, branchy bush with many straight or curved thorns. Most often the bush is white, but it can also be cream. Not everyone succeeds in meeting coral gericium, because it is a very rare mushroom. In Russia, it grows mainly in the Far East, in the Krasnodar Territory, Siberia. It grows on trees and stumps, only on deciduous trees. Young, aromatic and firm flesh is white, less often pinkish or yellowish, smells good and is very tasty, but old mushrooms become tough.

The coral mushroom, as the hericium is also called, has other names based on its forms. So, among mushroom pickers, it is known as a trellised hedgehog or a branchy gericium.. 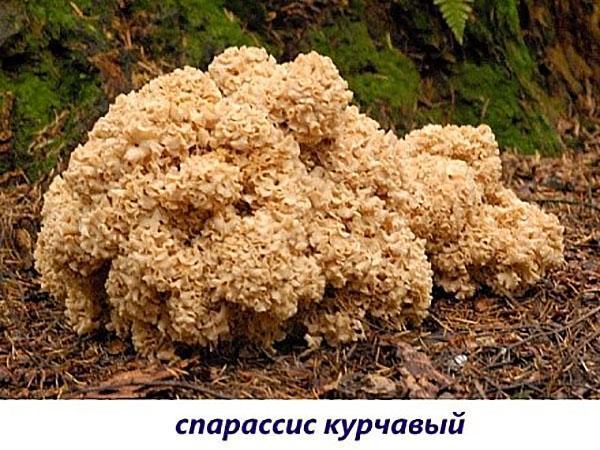 A huge curly sparassis grows on the roots of coniferous trees. By its nature, it is a parasitic fungus, since it destroys the tree, provoking a disease with red rot, which leads to the death of the owner. The weight of one adult mushroom can reach 10 kg, and the width is more than 0.5 m.

It grows as a dense bush, which is formed, in principle, by small mushrooms with wavy curved caps, their diameter does not exceed 5 cm. The mushroom bush has a rounded shape and very curly, for which it got its name. It is also often called cabbage (mushroom, boar, or hare). The mushroom is edible: the young, fragile flesh is very tasty and smells like nuts, but in older sparassis it becomes tough.

Mushroom cabbage is protected by the Red Book, as it is on the verge of extinction. 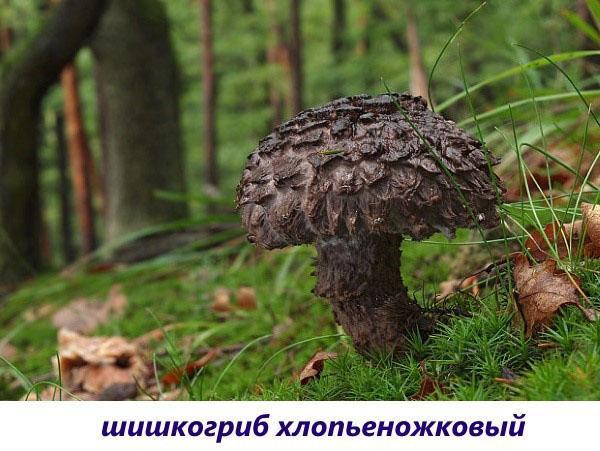 Among the mushrooms with interesting shapes, it is worth highlighting the cotton-leg mushroom – a very funny mushroom with a cap that looks like a pine cone. It is convex and all covered with scales, which hang down from the edges of the cap, and is also present on the leg. The color is no less interesting: young pine cones are gray-brown, but as they mature, they become chocolate-black. The flesh of such a miracle mushroom, oddly enough, is light, but when cut, it first turns red, and then also becomes dark, almost black with a purple tint. Emits a characteristic mushroom smell.

Pineapple is classified as conditionally edible mushroom: they cannot be poisoned, but not everyone likes the fibrous pulp. 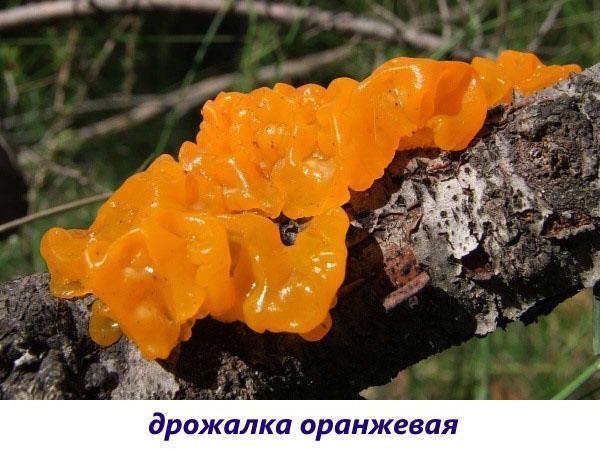 Oddly enough, but the jelly-like shapeless mass on the trees is an edible orange shivering mushroom. It looks, of course, not very good: a sticky trembling mushroom body up to 10 cm in size is slightly transparent, painted in a yellow-orange color.

In a dry summer, almost all the liquid from the shiver evaporates, and the mushroom turns into a kind of crust, but after heavy rains it swells again and acquires the former gelatinous structure. But the bright orange color disappears in a rainy summer, giving way to a white, almost transparent color.

Shiver can also often be found on certain tinder fungi – this is how its natural parasitic properties are manifested. Young gelatinous mushrooms are considered a delicacy, especially in China, where they are prepared for soup. Old mushrooms are not suitable for culinary masterpieces – they are very tough.

Spruce peel – a mushroom in a glass cap 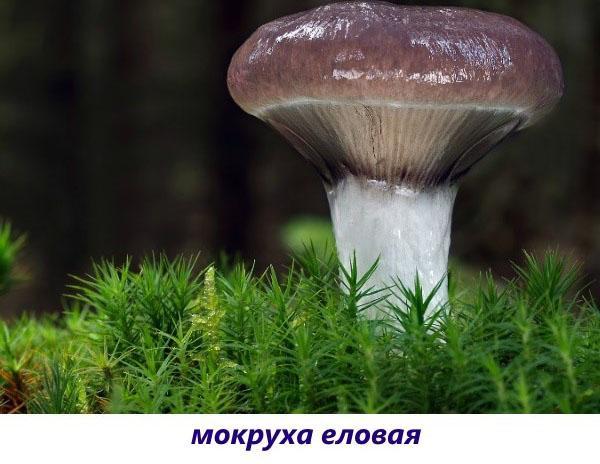 In coniferous forests, under spruce trees, a mushroom, quite common at first glance, called spruce mokruha grows. But if you find young mushrooms, do not be intimidated by a slimy blanket that completely covers the cap and passes onto the leg. From a distance, it seems that the mushroom has put on a glass hat or a spacesuit. As it grows, the transparent veil breaks, and its remnants are visible only on the stem. In this form, the spruce mokruha also looks very beautiful: the hat is painted purple-brown. The pulp of the mushroom is light, smells good and is very tasty. 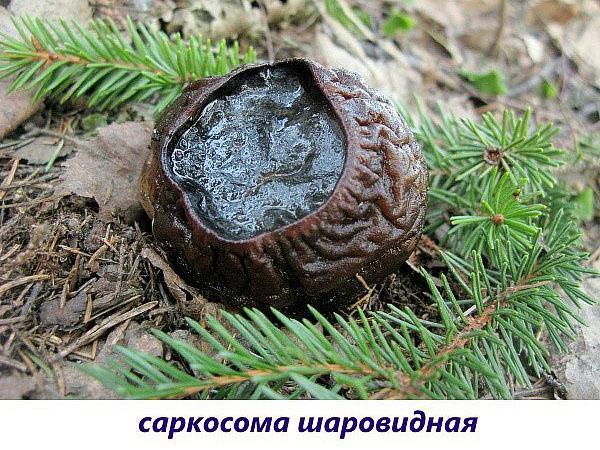 Brown barrels filled with dark liquid and covered with a shiny disc on top – it’s hard to imagine a more unusual mushroom. This is a unique globular sarcosoma, listed in the Red Book. You can find it only among the thickets of moss, in the impenetrable forest thicket. Sarcosoma is considered conditionally edible (some gourmets fry the fruit body and claim that it is very tasty in this form), but the main value of the mushroom lies in the liquid. It has healing properties and is widely used in traditional medicine..

Summing up, we can say one thing: not everything that looks strange, in fact, is. Unusual mushrooms can be edible and even delicious, but if you are not sure about their edibility and do not know how to cook them, you should not take risks. Collect only mushrooms you know well and boil them well to avoid unpleasant consequences..