The benefits and contraindications of pickled ginger 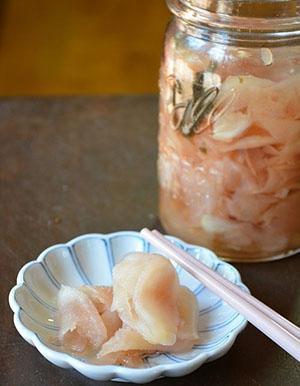 Pickled ginger came to Russia in the wake of the popularity of oriental cuisine. Along with Japanese and Chinese delicacies, national spices have become available to domestic gourmets. Today, interest in juicy, with a pungent taste and fresh aroma of rhizomes is warmed up not only by culinary experts, but also by lovers of exotic cultures. Ginger plants can be found on indoor windowsills and even in country greenhouses..

If you try a fresh root, a person unfamiliar with it will be struck by the pungent taste, juiciness and refreshing tonic ability of the product. In ancient times, plant rhizomes were valued as a remedy for fever and various infections. Ginger-based remedies were considered an elixir for male and female infertility, and were used to treat intestinal ailments and joint pain. Modern studies of the root have fully confirmed the guesses of the ancient Aesculapians.

Read also the article on the topic: Ginger – useful properties and contraindications! 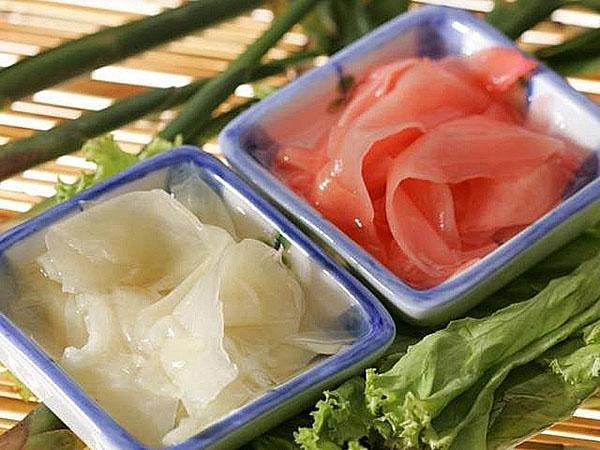 But which of their bioactive substances are stored in a pickled product? What are the benefits and harms of pickled ginger? How to make this original spice at home?

For the preparation of pickled ginger, choose the most juicy healthy roots without rough skin and often located eyes, signs of pest damage or rot. High-quality rhizomes contain a lot of moisture, fiber, sugars and essential oils, which give the finished seasoning its recognizable aroma, as well as determine the beneficial properties of pickled ginger and contraindications to its use. 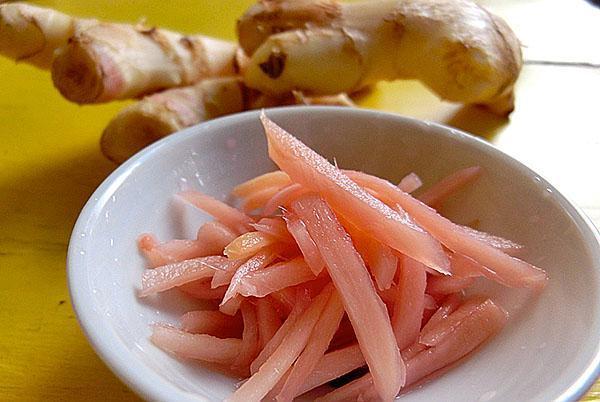 In addition, ginger, both fresh and pickled, can be called a real pantry of vitamins and minerals. In terms of the amount of bioactive substances, the root competes on a par with fresh garlic and ginseng. The leading positions among vitamins are occupied by ascorbic acid, A, B1, B2, some other amino acids, as well as micro- and macroelements such as iron, magnesium, potassium and calcium, phosphorus and zinc. 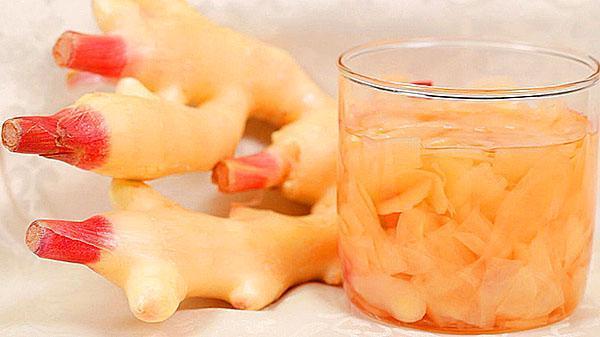 Natural bitterness in the composition of pickled ginger provides its pungent taste and predetermines its active effect on the human body..

If we compare fresh and pickled root, the taste of the latter is softer, since some of the essential oils and bitterness are lost, but instead of them, the sweet and sour aftertaste of rice wine, sugar and vinegar is added to the bouquet..

Like many herbal products, pickled ginger has an extremely low calorie content and does not exceed 51 kcal per 100 grams of product. True, it should be remembered that this figure depends on the chosen cooking recipe. If butter or sugar is used in the marinade, the number of calories increases..

Pickled ginger can rightfully be called not only an appetizer or seasoning, but also an effective food supplement. This is how it is treated in Japan, where the marinade is served with seafood dishes. Knowing the peculiarities of the local cuisine, which offers consumers food in abundance that has undergone minimal heat treatment, it can be argued that ginger has a role: 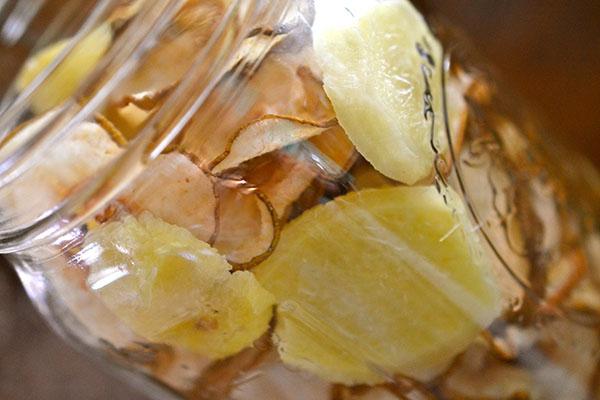 An example would be using pickled ginger from sushi. Without additional heat treatment, seafood is very quickly contaminated with bacteria and can cause serious poisoning..

Pickled ginger is useful in that it has a pronounced bactericidal effect and does not allow pathogenic microflora to harm the body. In addition, it stimulates the digestion of food and gently normalizes metabolism..

Keep in mind, however, that it can be difficult to separate the benefits of pickled ginger from the harm to be expected from overuse. And here it is worth learning from the same Japanese who always put very modest portions of a spicy aromatic snack on the table.. 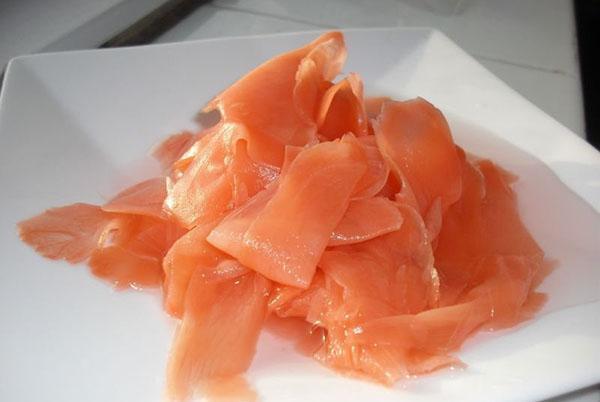 Not everyone knows about another purpose or property of pickled ginger. The root can freshen breath and sharpen the sensitivity of the taste buds. It is served between dishes so that a person can fully enjoy the true taste of a particular dish. It is interesting that the prudent Japanese have taken this feature into account and have long used two types of snacks in national cuisine: 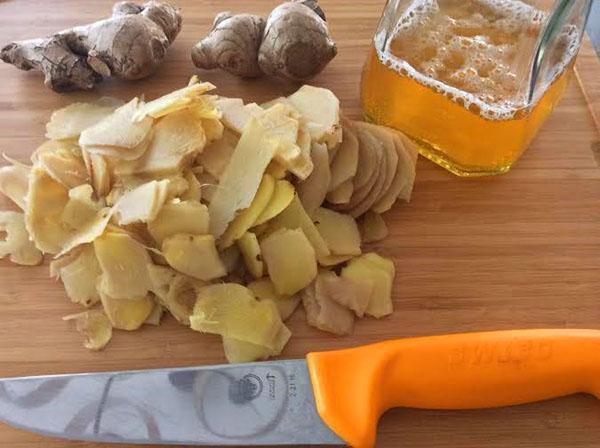 The answer to the question: “Is pickled ginger good for you?” unambiguous. Yes, such an appetizer will not only bring pleasure to lovers of spicy dishes, but also have a beneficial effect on the body..

First of all, ginger root grows numb with a lot of benefits for digestion. It stimulates the digestion of incoming food, disinfects, facilitates the passage of gases and reduces their amount. But this is not its only valuable property..

In moderation, pickled ginger can be an effective preventive measure against the threat of atherosclerosis..

The active substances in its composition resist the deposition and accumulation of cholesterol, affect the quality of blood and even strengthen the walls of blood vessels.

Pickled ginger is used in situations where a person:

Fresh and pickled root will increase tone, strengthen immunity and cope with the bacterial flora of the oral mucosa. 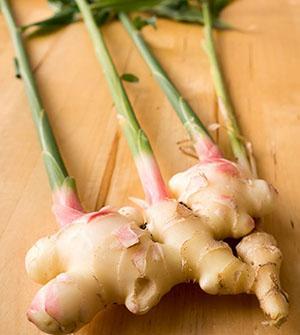 Today, the use of pickled ginger for weight loss is gaining popularity. Weight loss as a result of eating small portions of the product is due to its positive effect on metabolic processes. Root: 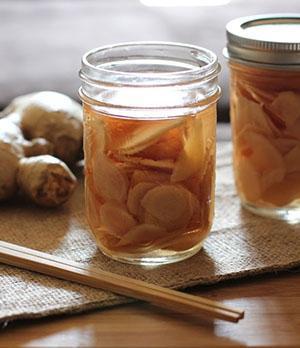 How to use pickled ginger with benefit and harmlessness? Like other foods that contain many active ingredients, ginger requires careful and careful handling. Abuse of the product threatens to exacerbate chronic diseases, such as gastritis, peptic ulcer disease or diabetes. With care, you need to include in the menu a spicy snack for pregnant women, especially in the second half of the term. If you are allergic to fresh ginger, then you will have to give up the pickled root..

How to pickle ginger at home

Today the trade offers fresh, pickled, dried ginger. There is always a sufficient assortment of these products on store shelves. But if you wish, you can prepare your own ginger-based snacks. Moreover, it is not difficult to do this, especially since there are several available recipes for pickled ginger at home. 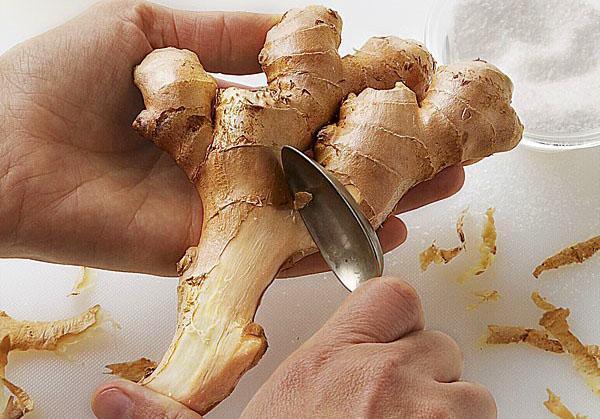 For canning, it is better to choose young roots that have:

Before pickling ginger, peel the rhizomes by cutting off the peel with a thin layer, removing dry and damaged fragments.

There are many recipes for making ginger. They all differ in the composition of the marinade. In the simplest case, the marinade is made from a mixture of rice vinegar, salt and sugar..

Such pickled ginger is ready in a few hours and can delight guests who have come to a home holiday or amaze family members who have gathered for a regular dinner..

Peeled and cut into thin slices, the root is laid out in clean small jars and poured with hot marinade. To prepare it, take a quarter cup of vinegar, two tablespoons of salt and three tablespoons of sugar. When the liquid boils, it is removed from the heat, filtered and poured into prepared containers with ginger. 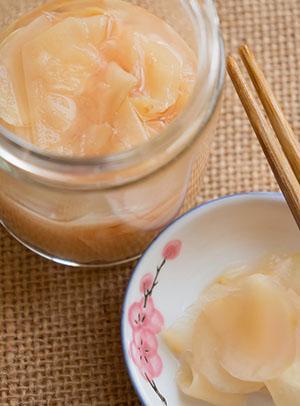 There is another recipe for pickling ginger at home. Prepare some sake, rice wine and sugar for the snack.

After a few days, the appetizer will be ready. It goes well with meat dishes, fish and, of course, the Japanese favorite sushi. If cleanliness is maintained during preparation and storage in a refrigerator, pickled ginger does not lose its taste and useful properties for up to three months.