The healing properties of wormwood for your health 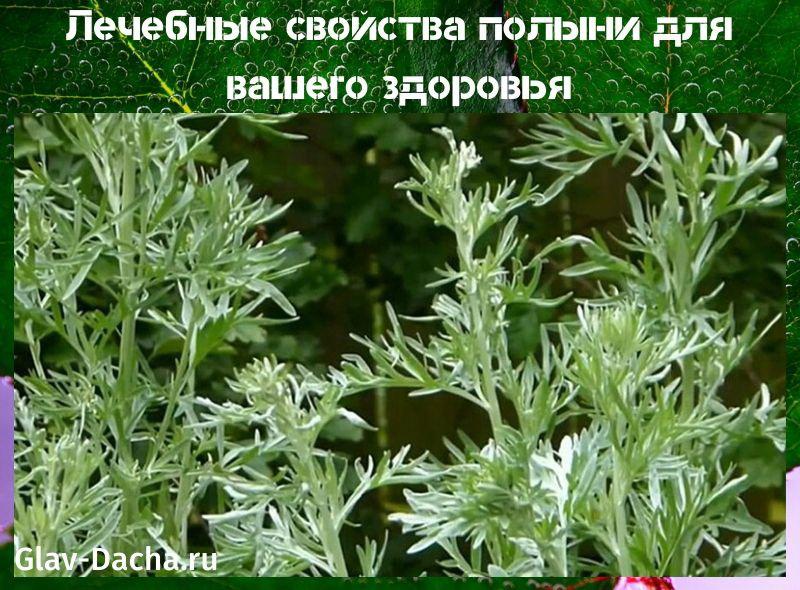 Silvery wormwood bushes grow in meadows, fields and along roads. The plant attracts attention not only by the unusual color and shape of the leaves, but also by its strong aroma. Traditional healers have revealed to the world the healing properties of wormwood, and over the centuries, a huge number of recipes have been collected to improve human health. The unusual qualities of the plant are also used in traditional medicine for the manufacture of medicines.. 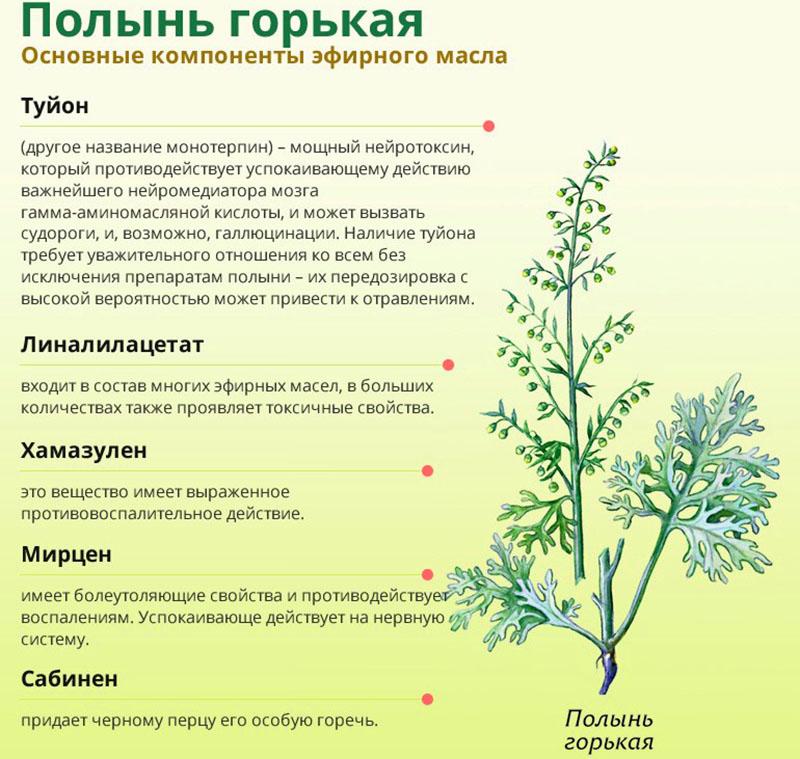 The medicinal properties of wormwood are due to the presence of special substances:

The presence of unsaturated hydrocarbons in the plant endowed it with fungicidal and bactericidal properties. Unique terpenoid compounds have a cardiac stimulating and anti-inflammatory effect on the body. Perfectly stimulate the work of the gallbladder and improve the processes in the pancreas, the halogen substances in the wormwood. 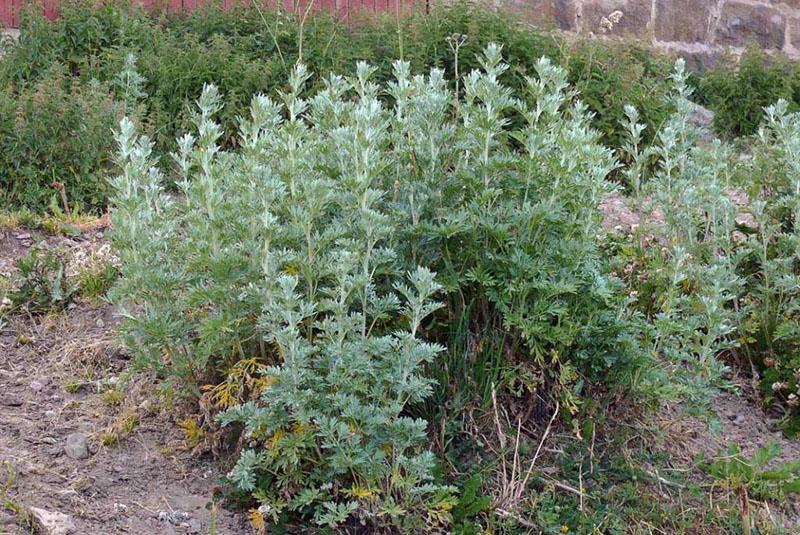 In traditional medicine, wormwood preparations are used to improve appetite and digestion. From the stems and foliage of the plant, in the process of processing, chamazulene is obtained, which is necessary for the treatment of X-ray burns, eczema, rheumatism and bronchial asthma. Wormwood is also introduced into medicinal preparations to reduce flatulence, improve stomach function. 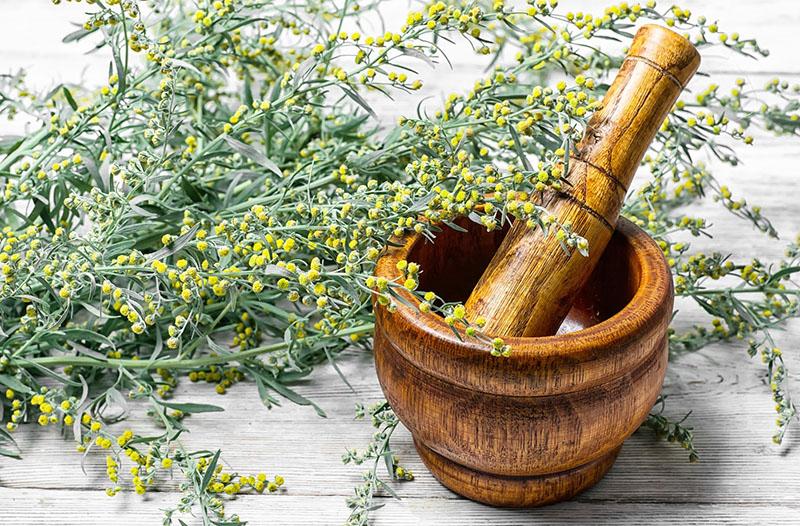 Outwardly, wormwood preparations are used for lotions and compresses as: 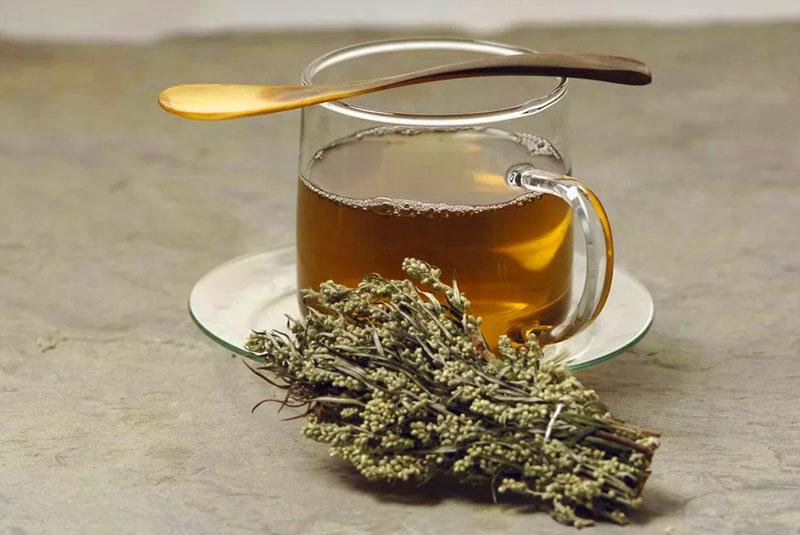 Inside, wormwood preparations are used for:

For any diseases, preparations from wormwood should be prescribed by a doctor. He will accurately determine the dosage and timing of taking the medicinal product..

However, wormwood is not a unique plant for treating all diseases. Like any other plant, it has contraindications for use. In no case should pregnant women use wormwood. This is due to the fact that the plant has toxic substances that can adversely affect pregnancy and cause its termination..

Wormwood treatment is contraindicated for:

The plant itself is poisonous and even with a slight overdose, instead of benefit, it can cause harm. An absolutely healthy person may have muscle tremors, various visions and a mental disorder. Doctors do not recommend using decoctions, teas or tinctures of wormwood for a long time, so as not to provoke a dangerous overdose.

When is it better to collect wormwood and how to store 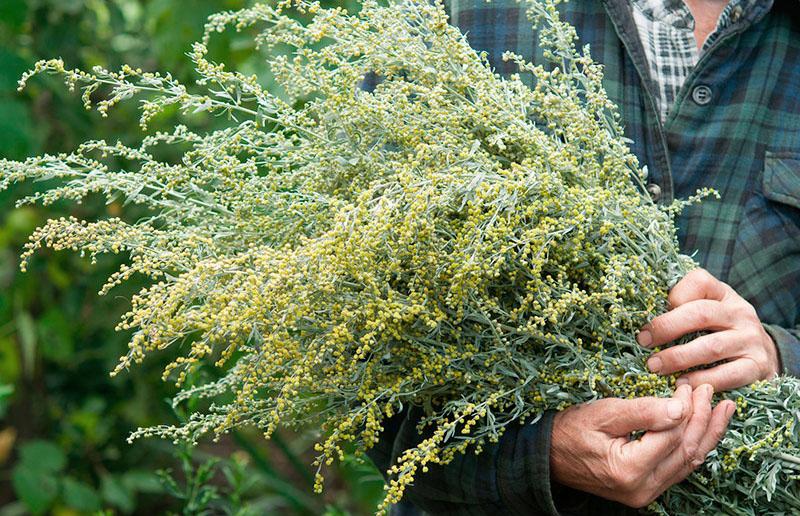 Traditional healers use all parts of the wonderful wormwood to prepare medicines. In order for the plant to give its best qualities to the maximum for the benefit of human health, it is necessary to properly prepare it. The root part is best dug up in the fall. In July and August, when the wormwood blooms, the aboveground part is harvested. 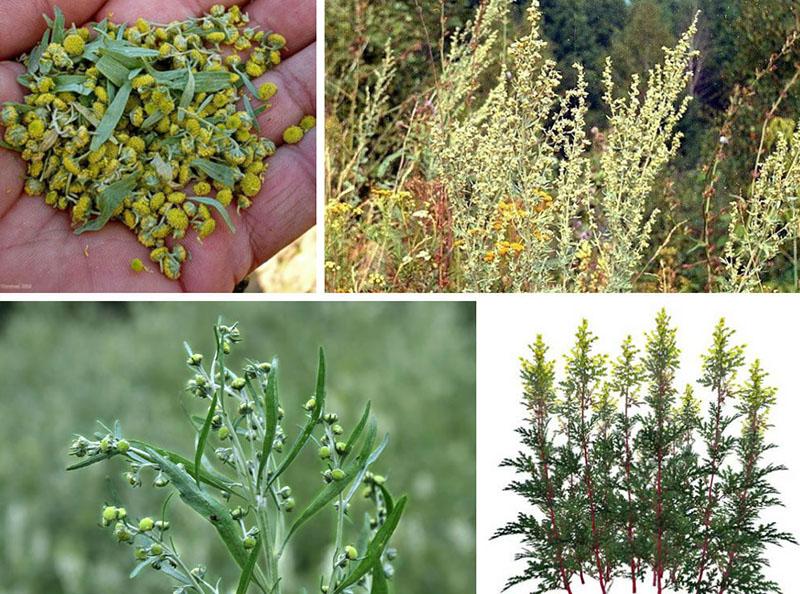 It is impossible to store other strong-smelling herbs next to wormwood and keep various toxic agents with a strong aroma.!

The use of the healing properties of wormwood by traditional healers 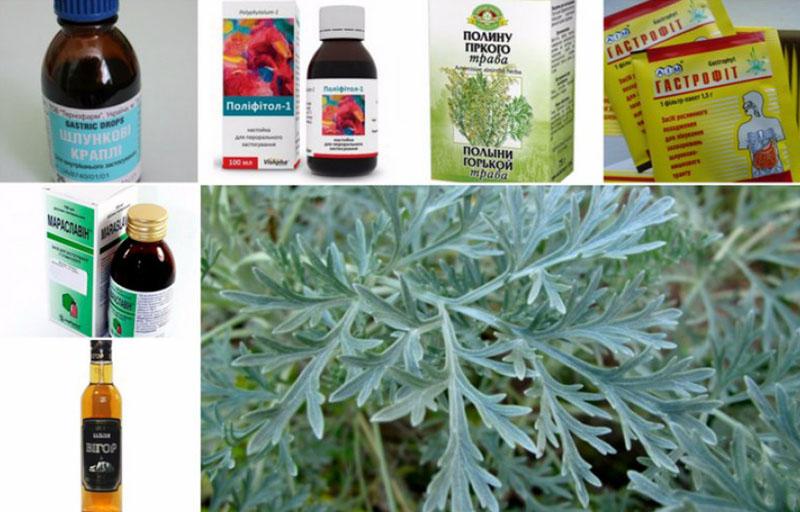 In ancient Rome, wormwood was used almost always and everywhere. The Romans considered the plant a gift from the gods. With its help, they got rid of not only fatigue and muscle pain. To avoid poisoning, bitter herb was added when cooking mushrooms and meat..

Use for gynecological problems 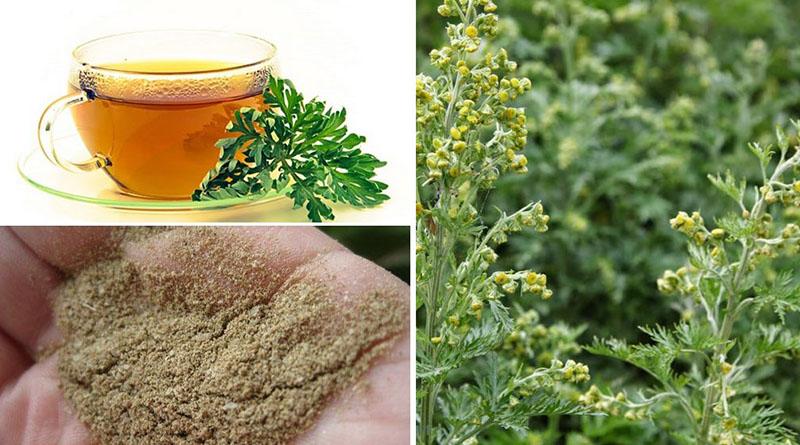 Insufficient and scanty menstruation in women can be restored by taking an infusion of the roots of ordinary wormwood for 5 days in the morning and in the evening 1.5 hours before meals. To do this, take one spoonful of the collection for half a liter of boiling water and keep in a well-closed container for 4 hours..

First aid for severe uterine bleeding is a decoction of (1 tsp) blood-red hawthorn, a glass of ordinary wormwood. For 250 ml of boiled water, just a spoonful of a mixture of herbs is enough. Boil for 10 minutes and let it brew for 30 minutes. Consume 1.5 hours before meals, dividing the broth into 3 parts. The effect can come after the second dose. In this case, simply pour out the remaining broth..

In case of uterine bleeding, an urgent need to consult a gynecologist. Folk remedy from wormwood is only an auxiliary aid to avoid large blood loss.

Unpleasant symptoms and poor health during menopause can be smoothed out with an infusion of:

Take 2 tablespoons of all components. Grind well and pour in a liter of boiling water. After an hour, strain and consume in the morning and at bedtime in the evening. 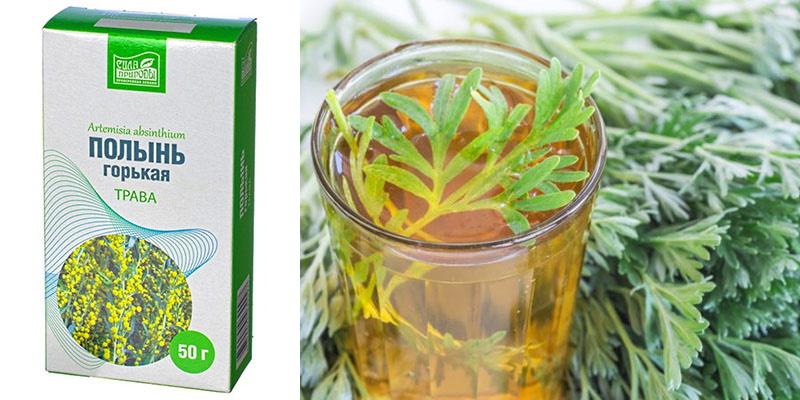 To get rid of parasites, it is necessary to prepare a special composition of garlic juice (half a glass) and wormwood tea (dry herb 1 tablespoon per 250 ml of water). Means to use for enemas.

Before going to bed, take a decoction of 500 ml of kvass and 2 tbsp. l wormwood roots.

In the fight against bovine tapeworm, a decoction of carrot seeds (5 parts) and leaves of peppermint, buckthorn, tansy flowers, wormwood, valerian root (3 parts each) is used. Use the product for at least 3 days (morning and evening). For one day, it is enough to boil 4 tbsp in 0.5 liters of water. l composition of herbs. Simmer over low heat for no more than 10 minutes. 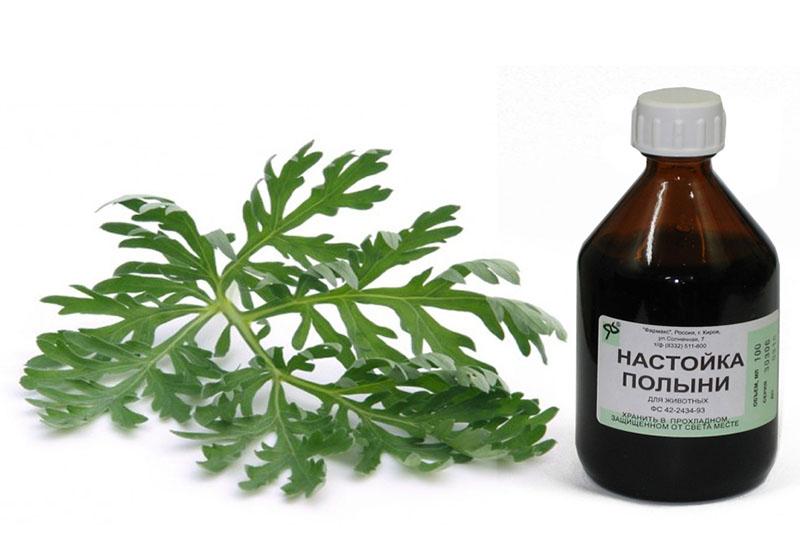 To bring out roundworms −­­ use an alcoholic infusion of wormwood. For this, the grass is harvested in May and dried. Simply fill a bottle or jar with dry grass and fill it with good alcohol. The container is exposed to the sun for 3 weeks. Measure out only 20 drops at a time. Consume before breakfast, lunch and dinner. 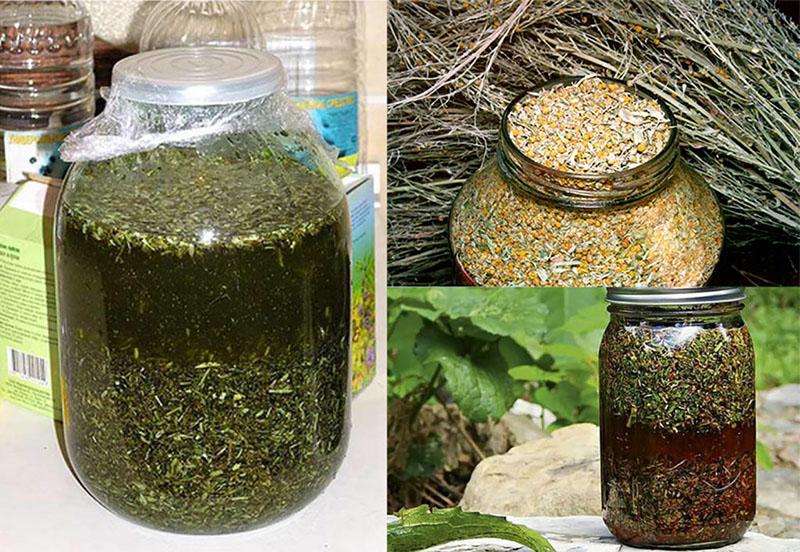 In equal proportions (0.5 tsp each), mix and grind cloves, flax seeds and wormwood. Prepare carrot juice. Wash down the powder in your mouth with a fresh drink..

Always use cloves and wormwood at the same time! Carnation fights parasite larvae and eggs, wormwood herb works great with mature worms and their intermediate stages of development, eliminating more than 100 species. 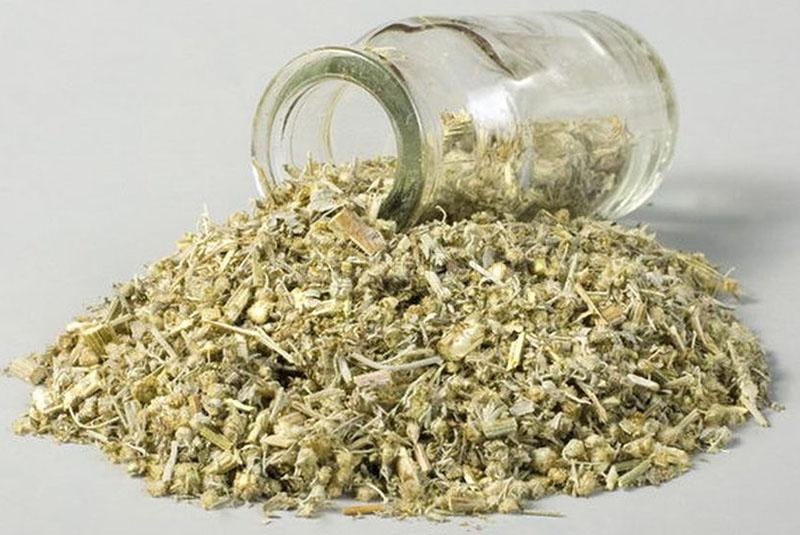 Poor appetite or lack of it can lead to rapid weight loss, weakening of the body, and even anorexia. You can help the patient by using a decoction. You will need one part yarrow and 4 parts wormwood herb. Grind the mixture and store in a closed container. For 500 ml of water, 1 tsp of the composition is enough. Brew as tea and take 50 g chilled no more than 3 times a day. 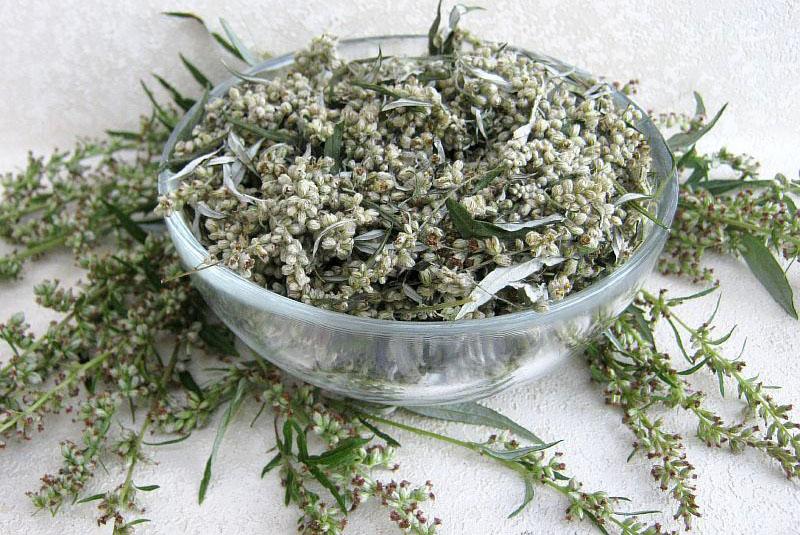 A decoction of dry wormwood root improves appetite well. 250 ml of boiled water will require 2 tbsp. l root. Boil the product for 10 minutes in a closed container. Drink the whole broth the day before meals (2 tablespoons at a time).

The healing properties of wormwood against colds and coughs

For the treatment of a cold, hot tea with 2 tablespoons of bitter wormwood vodka is used. Drink the drink once a day. Carry out the treatment for 3 days. Prepare the product in advance and store in the refrigerator. A bottle of vodka will need only 4 tbsp. l wormwood. Withstand the infusion for 21 days away from light. 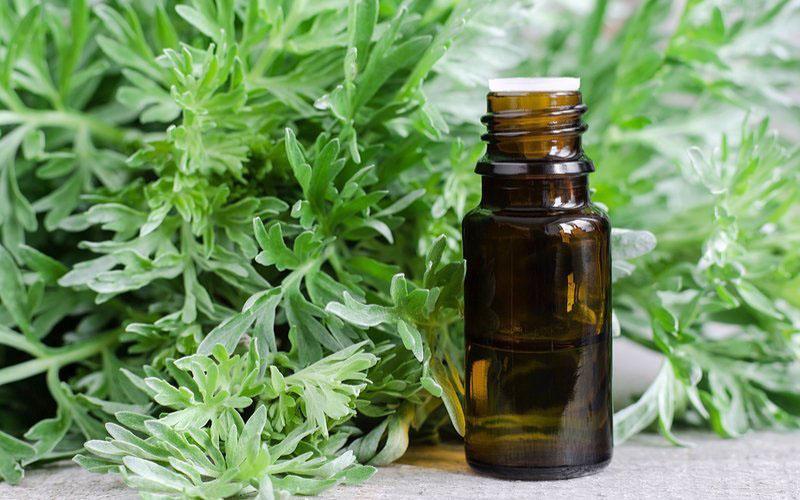 Oil infusion of wormwood seeds works well at high body temperatures. For 1 tablespoon of any vegetable oil, a tablespoon of seeds is required. Boil the product over low heat for only 4 minutes. Lubricate the patient with cooled oil. Pay special attention to the palms and soles of the feet. 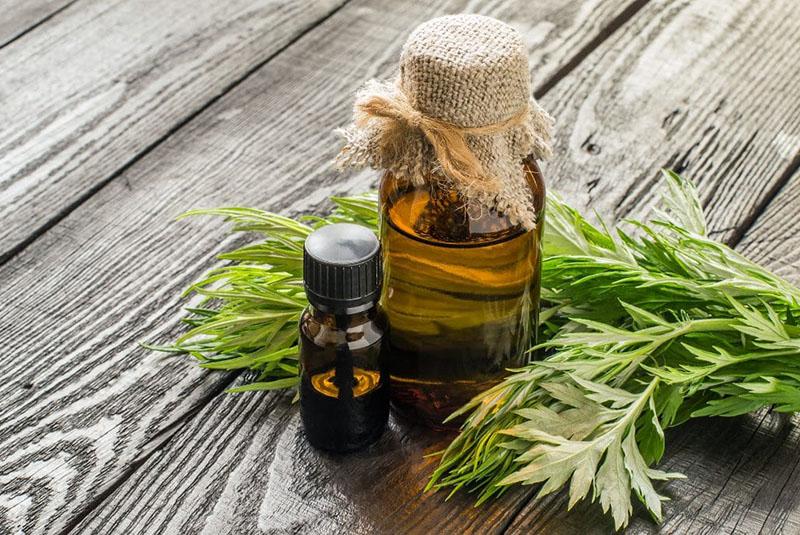 A bad cough doesn’t just bother the patient and others. The body is gradually weakening and needs help. For treatment, it is necessary to mix the roots and leaves of wormwood one to one. Add a teaspoon of the mixture to 250 ml of boiling water. After an hour, strain and divide into 3 doses. Take a break after 3 days. If you take medications for coughs at the same time, the duration of treatment will be significantly reduced.. 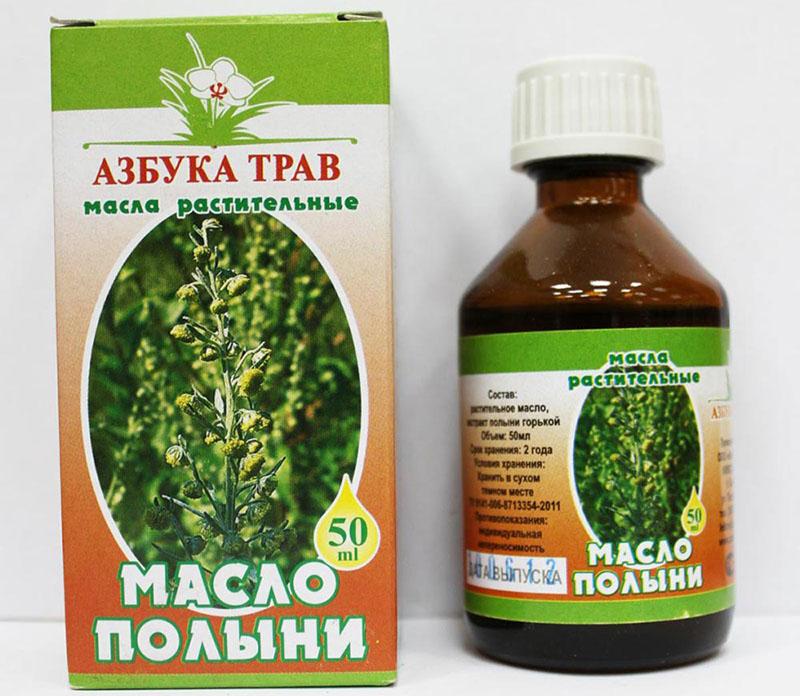 Having carefully studied the medicinal properties of wormwood and the rules for its use, you can help your body stay healthy. It is important to use wormwood products at the recommended dosages as an aid to traditional treatments..