A careful approach to drinking watermelon during pregnancy 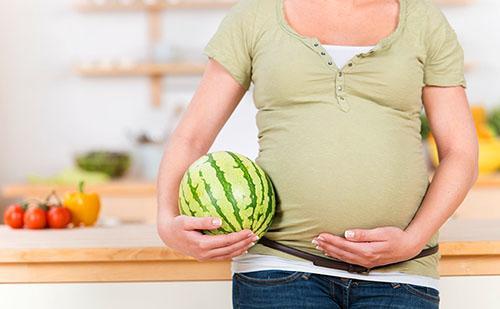 Pregnancy is the most responsible and difficult time in a woman’s life, when she is responsible not only for her own health, but also for the development of the child. Therefore, expectant mothers try to saturate the body with vitamins and other useful substances..

If the waiting time for the baby falls on the summer and early autumn, then it is simply impossible for a woman to pass by the huge collapses where watermelons are sold. A sweet slice relieves thirst and delivers incredible pleasure, but is watermelon useful for pregnant women, and will it be a good support for a woman during a period that cannot be called simple?

Under the influence of physiological processes, the expectant mother can experience not only positive emotions associated with the expectation of the baby. Pregnancy is sometimes accompanied by unpleasant symptoms and sensations, which include vitamin deficiency, toxicosis of different periods of pregnancy, anemic conditions, edema, digestive disorders, heartburn and nervous disorders. Can pregnant women eat watermelon? Will negative manifestations worsen??

Consisting of more than 90% of water, a huge berry, with a competent approach, can have an extremely beneficial effect on the female body, and in some cases, relieve the discomfort that accompanies pregnancy.

Why is watermelon useful for pregnant women?? 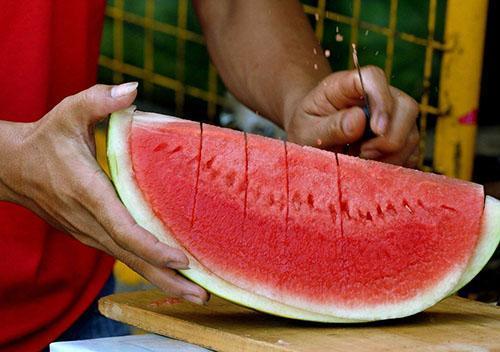 The benefits of watermelons during pregnancy are clear. Indeed, in addition to water, the red aromatic pulp of watermelon contains ascorbic acid, vitamins A, B1 and B2, PP, B5 and B9, as well as iron and magnesium, potassium, phosphorus and sodium, manganese and calcium, zinc, fluorine and many other micro – and macronutrients. There are organic acids in ripe fruits. Dietary fiber that has a positive effect on cleansing the body and digestion, natural sugars and other active substances.

Therefore, doctors not only do not prohibit, but also strongly recommend including watermelons and other melons and gourds in the diet of a pregnant woman. Why can you eat watermelon during pregnancy? And what is its effect on the female body? In reasonable quantities and with proper quality, watermelon pulp will help:

And, among other things, a watermelon during pregnancy is a good way to quench your thirst, quickly replenish the supply of strength and elements necessary for the body..

Surprisingly, just a small slice of watermelon in a pregnant woman can neutralize signs of toxicosis. 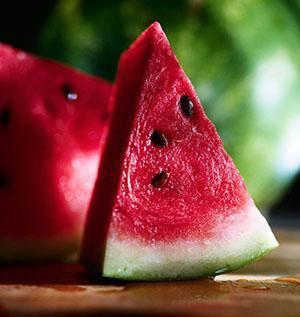 In the third trimester, drinking a ripe watermelon containing magnesium and potassium for a pregnant woman will help to cope with limb cramps and other muscle spasms..

Lycopene or how watermelon is useful during pregnancy 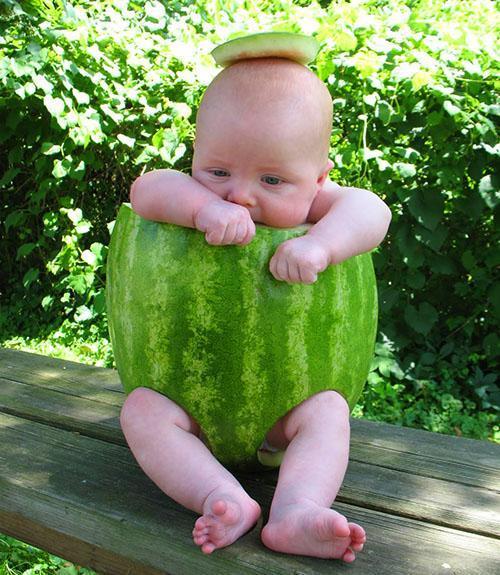 One of the signs of ripeness and quality of a watermelon is traditionally the bright red or pink color of its flesh. And although today varieties have appeared with no less sweet and juicy yellow or even painful core, it is better for pregnant women to stay on more familiar fruits..

It is in the red pulp that lycopene is found. This substance has all the properties of an antioxidant, supports immunity and protects the expectant mother from cardiovascular and tumor diseases..

The female body, as the fetus develops, experiences serious stress, and thanks to lycopene, several slices of watermelon:

Benefits of watermelon during pregnancy for digestion 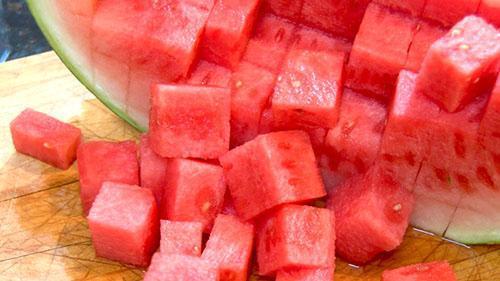 But to answer in the affirmative to the question: “Is it possible for pregnant women to eat watermelon?” follows not only for this reason. The role of watermelon in the diet is equally important if the expectant mother suffers from intestinal dysfunctions and other digestive disorders.

The most common problem in the second half of pregnancy is constipation that torments women, arising from the increasing pressure of the uterus on the organs of the digestive tract as the baby develops. During pregnancy, watermelon, which is high in moisture and fiber, can be a gentle and effective remedy for normalizing stool..

Red pulp activates metabolic processes, as if cleaning with a sponge toxins, stimulating the activity of the intestines and stomach, preventing fecal masses from stagnating and serving as a source of toxins.

Juicy watermelon during pregnancy as a natural diuretic 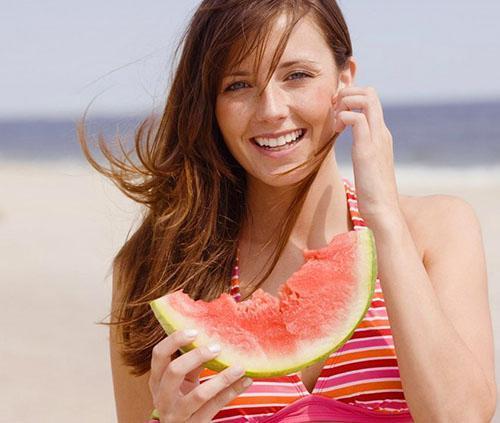 The kidneys of a pregnant woman, in addition to their usual functions, take on the responsibility to cleanse the mother’s body of traces of the future baby’s life. Therefore, the load on the organs of the genitourinary sphere is seriously increasing. So is it possible to eat watermelon during pregnancy, and will its use cause serious harm??

If you do not get carried away with watermelon and other juicy fruits, then they will only benefit. If the expectant mother does not have kidney and bladder diseases, then the doctor is unlikely to react negatively to the watermelon on the menu. On the contrary, if you eat up to 700 grams of fresh ripe pulp per day, it will serve as a diuretic and will help remove excess fluid and toxins..

In order to avoid trouble about the permissible portion of watermelon, it is better to ask the attending specialist, and with the slightest deterioration in health, it is better to refuse the delicacy.

Requirements for the quality of watermelon during pregnancy 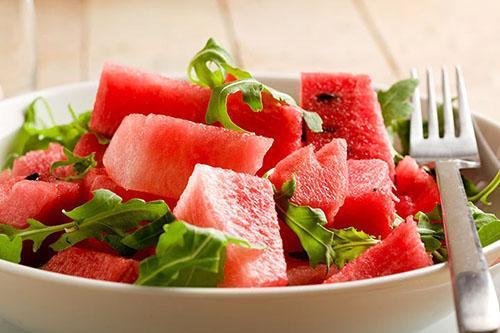 However, the beneficial qualities of a watermelon can only appear if the fruit is ripe and of high quality, as well as in the absence of medical contraindications. The sooner the watermelon hit the counter, the more likely it is not the hot summer sun for the sweetness and color of the pulp, but the chemicals that odd businessmen pump melons with in pursuit of profit.

And if for an adult organism the permissible intake of nitrates reaches 60 mg per day, then for an unborn child these substances are destructive in smaller quantities. That is why watermelon should not be consumed by pregnant women until the beginning of their mass ripening, that is, until mid or late August..

You can recognize the low quality of a watermelon:

The abundance of sugar and a loose surface make the watermelon pulp attractive to all kinds of pathogenic microorganisms that are dangerous for the woman and the fetus..

In order for a watermelon to bring only benefits during pregnancy, it is necessary to thoroughly wash the bark before use, and the already cut fruit should not be stored even in the refrigerator for more than a day. And eating summer delicacies is possible only with the permission of a doctor and subject to the strictest measures..

When and why pregnant women should not eat watermelon? 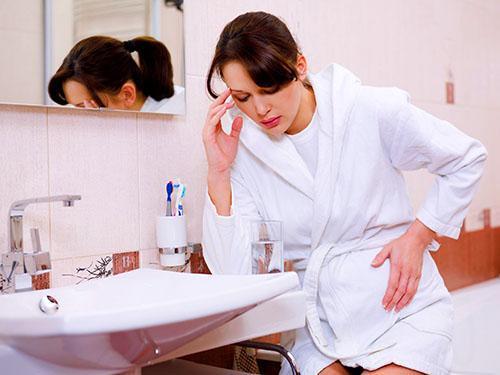 A pregnant woman will have to give up drinking watermelon if she is diagnosed with diseases of the gastrointestinal tract or kidneys, as well as if she has an individual intolerance to the product.

Watermelon during pregnancy is able to provoke an exacerbation of inflammatory processes in the kidneys, ureters and the digestive system.

Since the juicy pulp can activate gas formation in the intestines, increase peristalsis and cause diarrhea, this threatens the expectant mother with painful sensations and other unpleasant symptoms. And if there are stones and sand in the urogenital area, the watermelon activates their movement, which will certainly affect the woman’s well-being. This is why watermelon should not be allowed for pregnant women who have not received the permission of a doctor. Only by observing the rules of caution and knowing the measure, you can enjoy the sugar aromatic pulp with pleasure and benefit..

Video about nutrition for pregnant women