It’s time to plant an amazing spilantes in your dacha 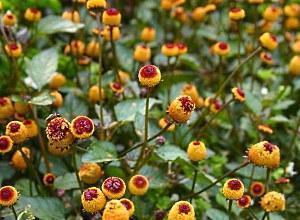 It is believed that this plant is native to Brazil, although many inhabitants of the subtropical and tropical climatic regions of the planet can argue with this, since one of its two varieties – spilantes orchard – grows precisely in the tropics and subtropics. Well, the plant is called Brazilian, probably because the second variety, called Oilcress, is also called by many Brazilian watercress. Here are just another subspecies called Indian Cresson. Again inconsistency.

And flower, and food, and medicine

This plant is just beginning to make its way in the Russian latitudes. But gradually it begins to gain popularity. The flowers are distinguished by a peculiar shape in the form of a large acorn and a double color: yellow and dark red. Flowers grow on elongated legs of creeping branches. This plant has a pleasant aroma and a pungent, but not like pepper, a special, piquant taste. If you chew a leaf, the taste of other food will be weak for a while..

In Russian latitudes, the plant is considered an annual. Spilantes can be found in the flower market. It is used as a therapeutic agent, in India it has found medical use as a stimulant.

Gardeners who grow spilantes in their beds rarely visit pharmacies. Small wounds and abrasions stop hurting if you bandage leaves slightly broken off with a wooden rolling pin to problem areas. In Brazil, spilantes is used in homeopathy. 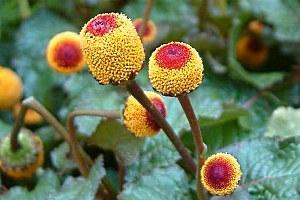 The leaves of the plant are used to relieve toothache and inflammation in the mouth. During an attack of stomach disease, it is recommended to chew a few leaves, and the pain will go away. Both fresh plant and dried plant have healing properties. From mid-July to late autumn, spilantes can be used as a drug that can easily relieve pain and heal small wounds and cuts. In winter, dried inflorescences will help, which should be collected during the beginning of flowering..

The secret of the anesthetic properties lies in the substance spilanthol, which is contained in the leaves of the plant. It is believed that the first anesthetic was derived from this plant. But in the treatment of serious diseases, healing leaves should be used only after consulting a doctor..

Gardeners grow this plant not only for its medicinal properties, but most of all, as a decorative flower. If you plant it along the curb, you get an attractive picture for the whole summer. But you need to plant spilantes on the sunny side. It must be remembered that this plant loves sunlight and warmth. Therefore, it should be planted in the ground with seedlings. No top dressing is required, spilantes grows very quickly, spreading over the beds with a multi-colored carpet.

The plant does not require special care. The main thing is regular watering during dry periods and loosening the soil. In those regions where the cold can cover the ground at the end of May or even in June, it is recommended to install wire arches above the spilantes, so that during the onset of cold, you have time to pull a plastic film over these arcs.

The little-known spilantes plant is still grown by single gardeners. Those of them who managed to grow these unique southern flowers will never give up. They really begin to understand the uniqueness of the plant, which can be successfully used for food, decorate a garden plot, as well as gazebos, verandas, hanging unusual flowers in pots or pots. Plus, the use of spilantes as a therapeutic agent is also used..