Pietrain pig breed: a meat giant with a harmful character 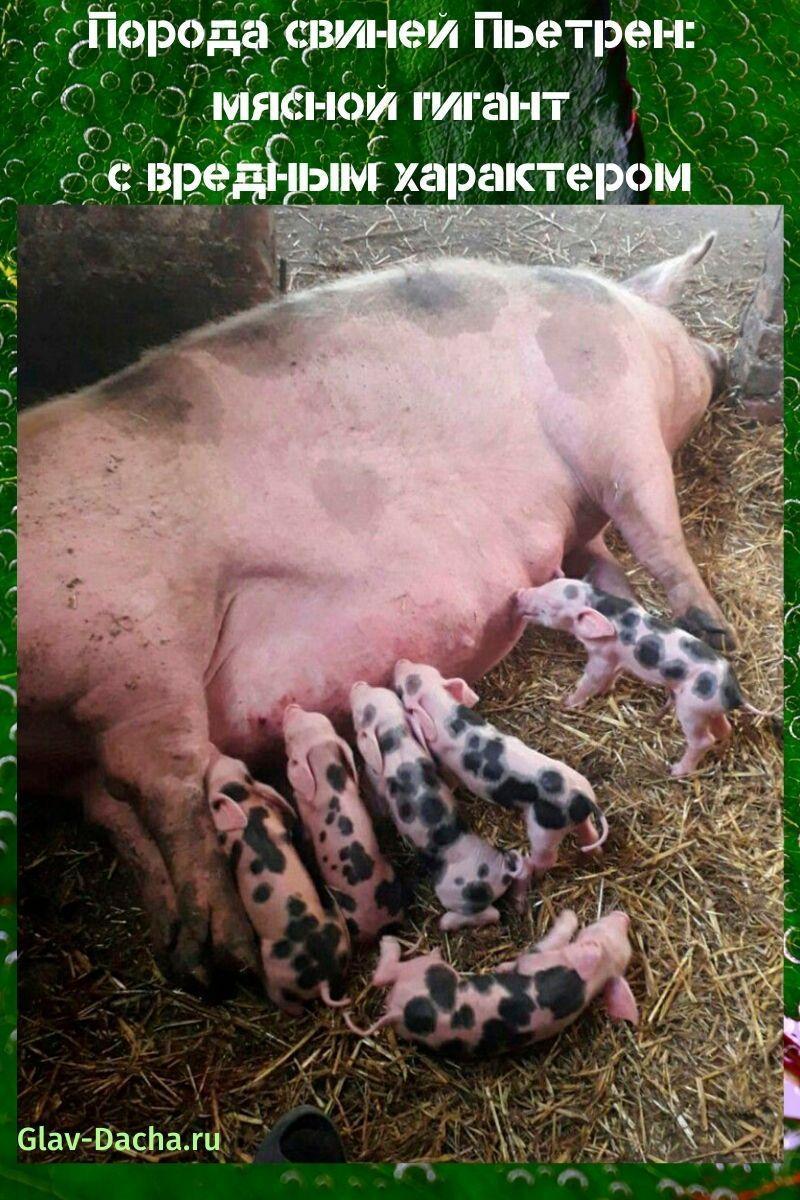 The Pietrain pig breed is considered the best among the breeds of the world gene pool, in terms of meat properties. It produces high quality bacon with thin layers of fat, which is very suitable for lovers of lean meats. Therefore, in European countries, this type of pig is especially popular..

The history of the breed 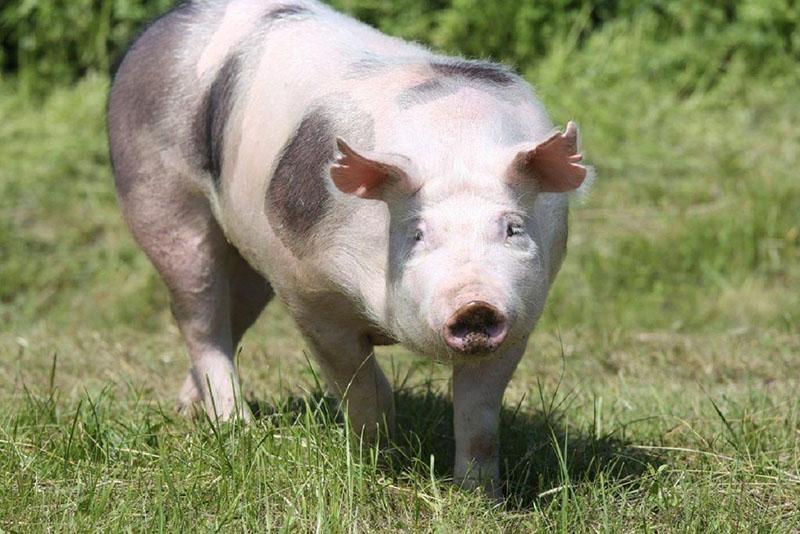 Pietrain pigs owe their birth to Belgian scientists. It was they who, in the twentieth century, were able to breed this type of agricultural livestock, crossing three already existing genera: Yorkshire, large white and Berkshire pigs.

In order for the bred breed to produce high quality products, breeders often resorted to the use of inbreeding – crossing forms within the same population. Thanks to this, the death rate of animals has become minimal..

In the 60s of the twentieth century, the first pigs of the Pietrain breed were brought to Germany for breeding purposes. The animal tolerated acclimatization well and quickly adapted to the new terrain. And today this breed has become so popular that in Europe it is used both to obtain high-quality meat and to improve the productive characteristics of representatives of other breeds by crossing.

The appearance and characteristics of cattle 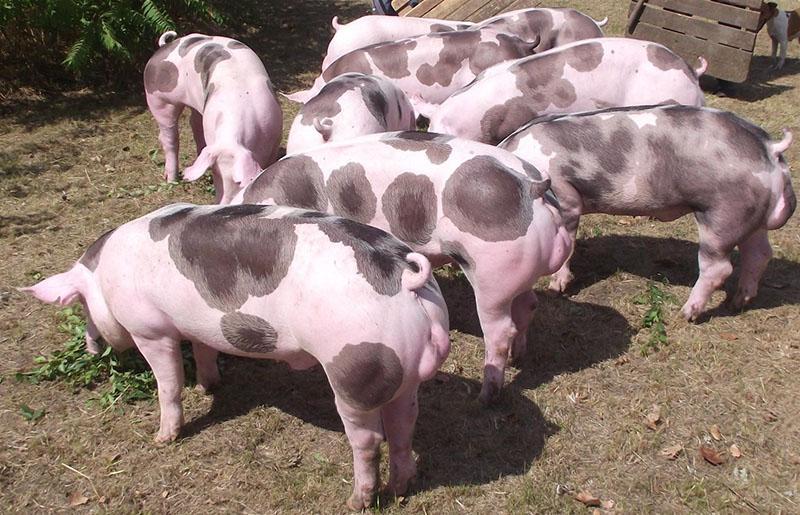 Individuals of the Pietrain breed can boast of large forms and a muscular, relief structure. And the main feature of their body is an abnormally wide sacrum. By it, Pietrain pigs can be recognized among other breeds of the same population. The shape of the body of the meat giant is cylindrical, like most pigs. But their color is quite original: white fur with chaotic black specks.

The Pietrain pig breed is characterized by erect ears. They are simply striking against the background of a relatively small animal head..

Adult females reach a mass of 220 kg, and boars, on average, are 30-40 kg heavier than them. Moreover, most of this weight is made up of muscles. The Pietrains’ skeleton is relatively light, and there is practically no fat on the spines and ribs. Therefore, this breed, according to the productive type, belongs to the meat or bacon.

Among the representatives of the Pietrain breed, individuals with a monochromatic white hairline sometimes come across. They are best used for slaughter. For crossing and breeding, standard pigs are more suitable, with a black and white fur coat.

When slaughtering animals weighing 100 kg, the yield of lean meat from the carcass will be at least 72% – for a normal breed, and up to 80% – for pigs with a pure white cover. And on average, it takes no more than 220 days to grow a pig to a specified mass. This is an excellent indicator.

Pietrain piglets have strong immunity to circovirus – a dangerous disease that causes lethal consequences. Currently, the virus is not well studied, so there are practically no cures for it.. 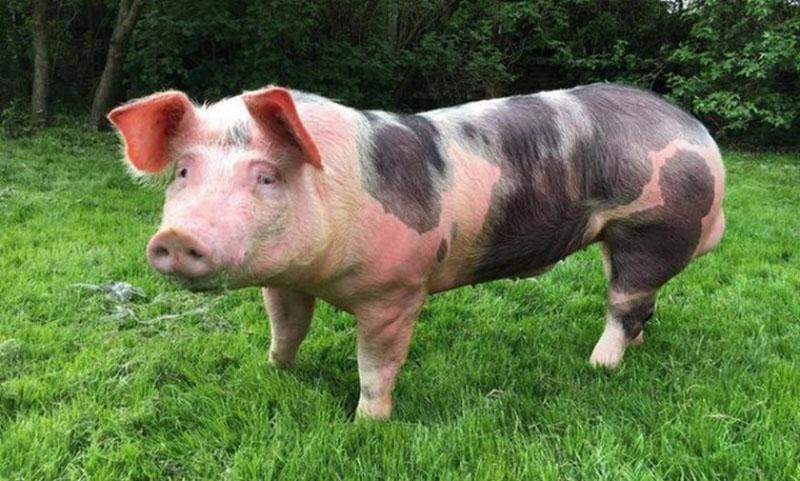 Thinking about the professional breeding of pigs, you must first weigh all the positive and negative aspects of this direction..

For example, choosing the Pietrain breed for breeding, you will receive the following benefits:

Disadvantages of the breed 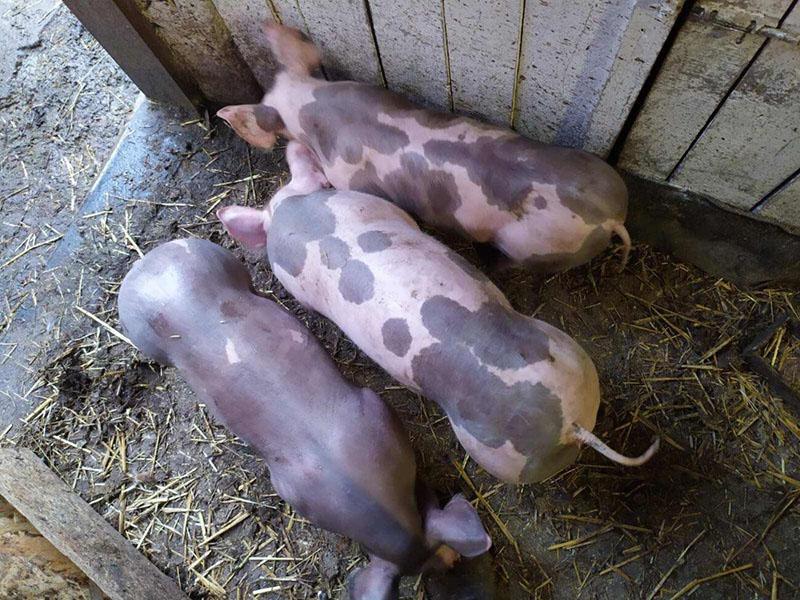 Despite the positive characteristics of Pietrain pigs, many farmers refuse to breed them..

The reason for this is the identified shortcomings of animals:

Another unpleasant feature of the Pietrain breed is its low stress resistance. The animal gets used to new conditions for a very long time, which affects the loss of appetite and weakening of the immune system..

When breeding pigs of the Pietrain breed, special attention should be paid to their habitat. The pigsty, in which the animal will have to stay up to 220 days, should be well insulated in winter, and in the summer, think over a ventilation system in it. Otherwise, there is a chance to raise an animal for slaughter, the mass of which will be 30-40% less than that of a normal Pietrain..

The optimal temperature regime for individuals of this breed ranges from -5 to +23 degrees.

For good ventilation of the pigsty, the floor should be covered with fresh straw. If in the same room there are individuals of different types (pregnant sows, fattening young animals and breeding boars), then it is advisable to keep them separately. Sows, in preparation for the appearance of offspring, are generally recommended to be settled in a separate pigsty..

Walking is not necessary for Pietrain pigs. Indeed, for their comfortable rest, certain climatic conditions are needed. And it is not always possible to reach them in open areas. A banal cold wind can provoke the development of inflammatory processes in an animal, and direct sunlight can provide it with sunstroke.. 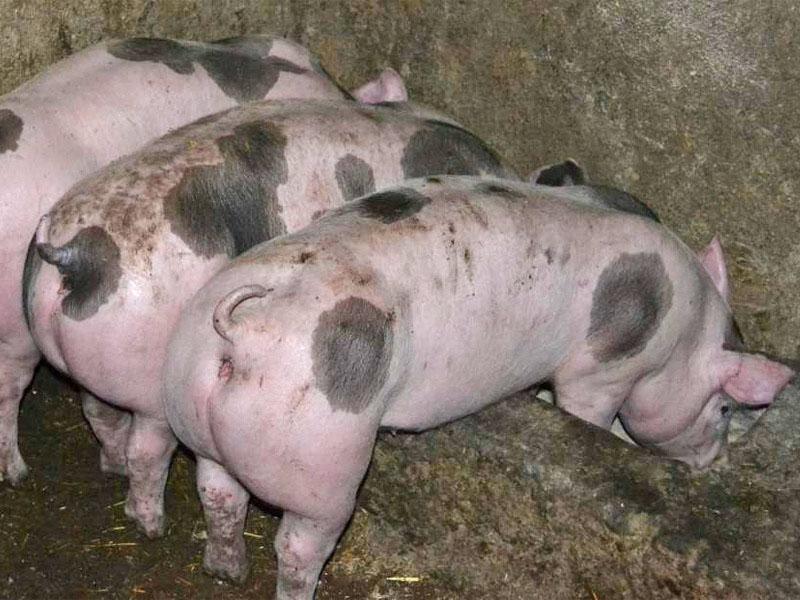 The Pietrain pig breed is characterized by a high metabolic rate. Therefore, the animals should be fed strictly according to the schedule.. 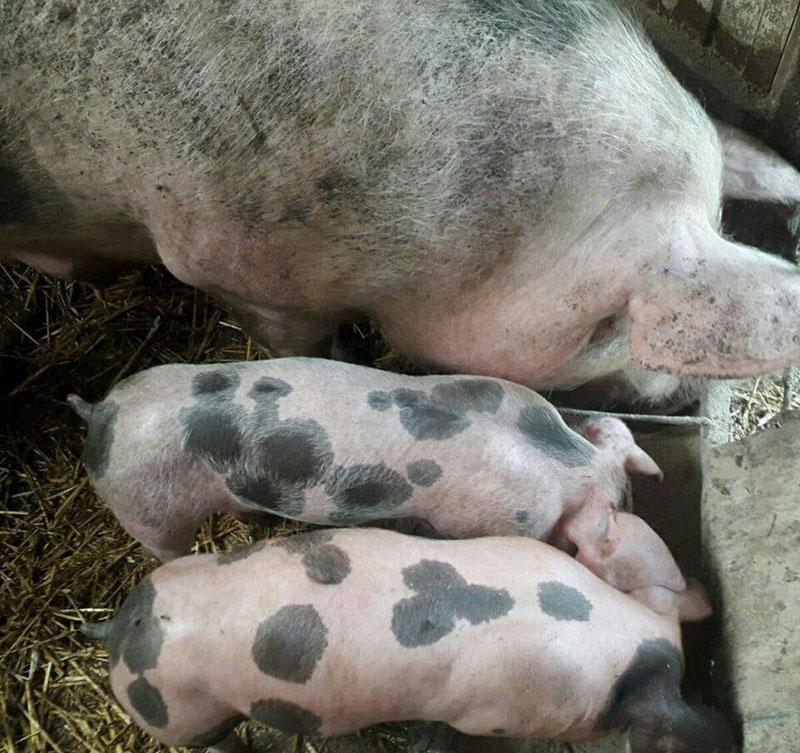 When fattening young animals, the daily ration should be diluted with protein feed. These can be products of meat, dairy or fish processing, cheese roots or boiled potatoes. Also, fortified complexes should be present in the boar’s diet. Without them, the animal will gain no more than 300 g of weight gain per day. 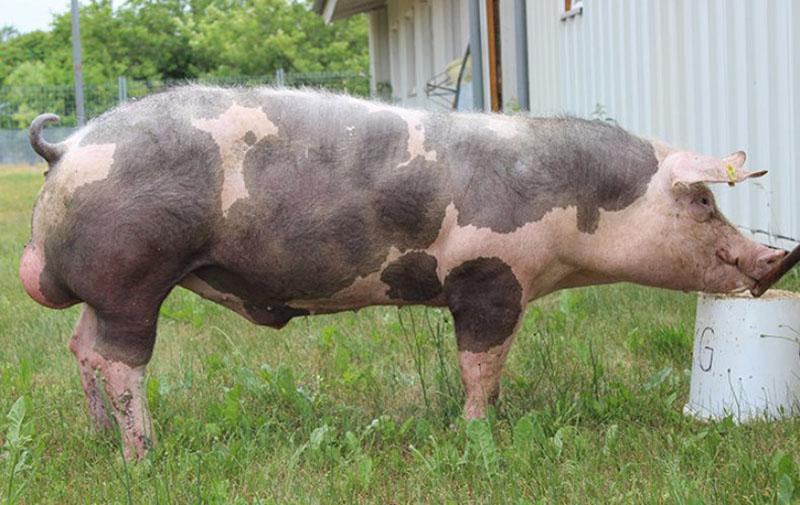 Reviews of the Petren breed among professional livestock breeders are predominantly positive. Farmers highlight the high resistance of pigs to serious diseases.

But from the common disadvantages of Pietrains, livestock breeders unanimously highlight the harmful character. Besides the fact that boars are very picky about food, they also love to dig floors in a pigsty. Therefore, be prepared for frequent floor changes and careful selection of the pig’s daily ration..