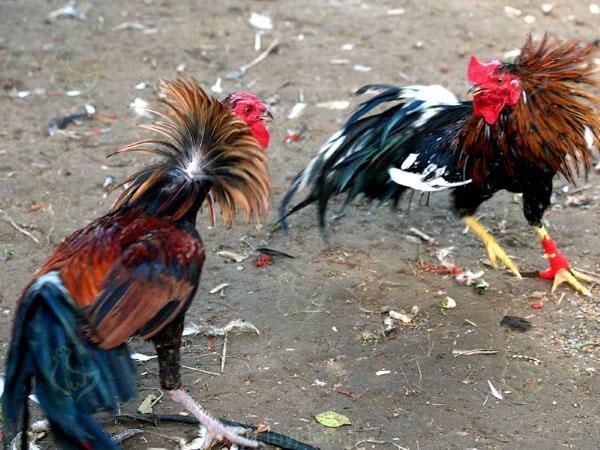 If you have a subsidiary farm, and at least a few cockerels are walking around the yard, you probably noticed that they often fight among themselves. This happens regardless of the type of birds, but there are also special fighting breeds of chickens. Using natural cockiness and developing muscle mass, many “warlike” birds have been created. Their main purpose is cockfighting, a popular entertainment in many countries. At the same time, such chickens will come in handy in the kitchen, since you can take a lot of meat from them. How do they differ from ordinary birds and what are they? Today we will introduce you to some of the popular breeds of true feathered warriors.. 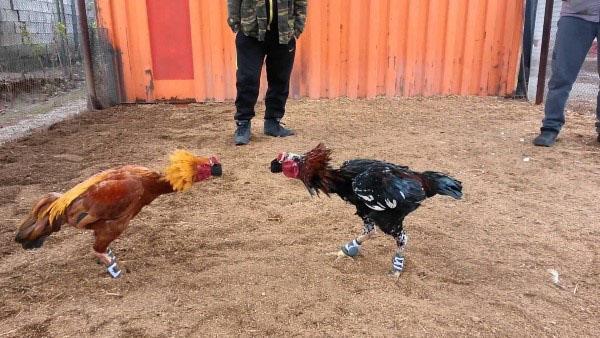 If you think that such individuals have an impressive weight, then this is not always the case. Indeed, some of their representatives gain up to 7 kg, but among them there are also outright “lightweights” weighing only 500 g. The main thing is not weight, but character and appearance. All breeds have a well-developed chest, large frame, strong legs and beak. In addition, they are an order of magnitude more aggressive and cocky than domestic cockerels..

Meat fighting chickens are distinguished by their high weight and dense constitution. From such a carcass, you can get 2-3 times more meat than from ordinary poultry raised in the courtyard.

In addition to the bad character, almost all breeds have another peculiarity that can be considered their disadvantage. They are not adapted to the cold, which makes them difficult to grow and requires special conditions. Birds have few feathers, they are short and loose, therefore they cannot warm.

As for the roosters, there is a specification among the fighters trained for fights. It is based on how fighters fight and behave in combat. Depending on the behavior of the roosters, a fight is distinguished:

Among connoisseurs of cockfighting, birds leading a thieving fight are in great demand. They receive a minimum of injuries and can participate in many battles..

There are a huge number of fighting breeds of chickens, you can list and talk about them for a long time. In order not to tire you, we will present and briefly study only a couple of the most interesting species. Among them are fighting chickens: 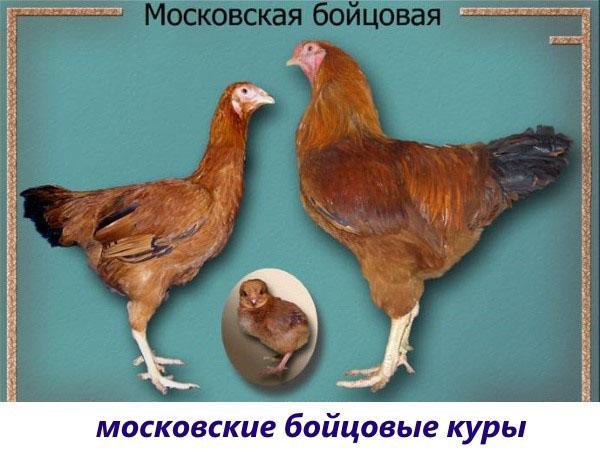 One of the rare breeds adapted to growing in our conditions. The Moscow breed of fighting chickens is distinguished by its high endurance in terms of conditions of detention. They are able to live even in an unheated chicken coop, but still in winter it is better that the temperature does not drop below 9 ° C heat.

The appearance of birds is quite attractive, but serious:

The replacement of livestock depends on the purpose of the rearing. Laying hens need to be changed in the third year – by this time the clutch is on the decline. Fighting roosters “age”, and their abilities weaken by the age of 4. When raising chickens for poultry meat, you can slaughter after 1.5 years. 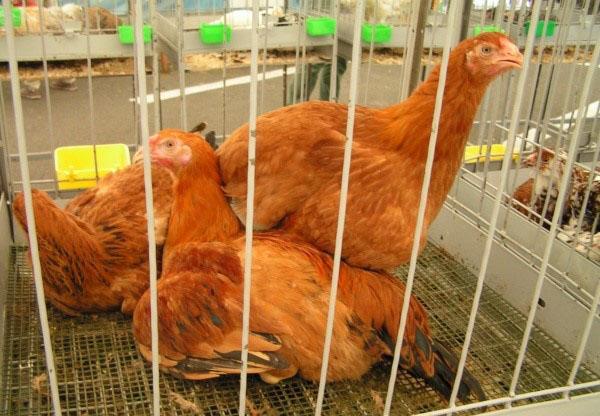 We can say that Muscovites hardly know fatigue, besides, both roosters and hens are very strong and brave. They weigh decently: roosters gain at least 3.5 kg, and with good care, all 6 kg. They respond well to training, and not all breeds have such a learning ability. Young individuals are set on reflection in the mirror, and only then training is carried out between the cockerels.

Moscow chickens can be both meat and fighting. The latter usually have a lower mass, but their aggressiveness is increased. The former are often grown in private farms for the consumption of their meat.. 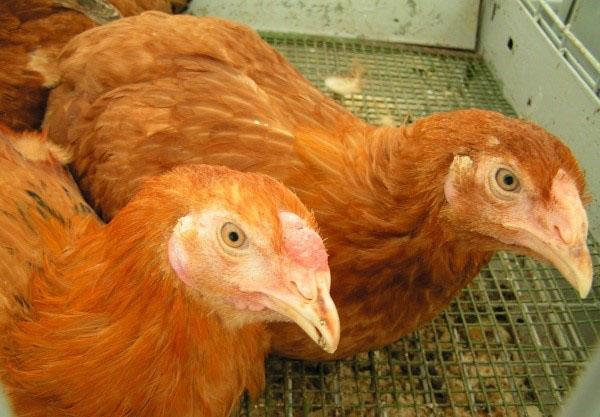 The chicken is also large, weighing up to 3 kg, yields no more than 120 eggs per year. At the same time, she begins to rush after reaching 8 months. One egg weighs about 50 g, the shell is brownish in color. It is worth noting that these chickens are excellent and responsible brood hens, which makes it easier to grow the breed.. 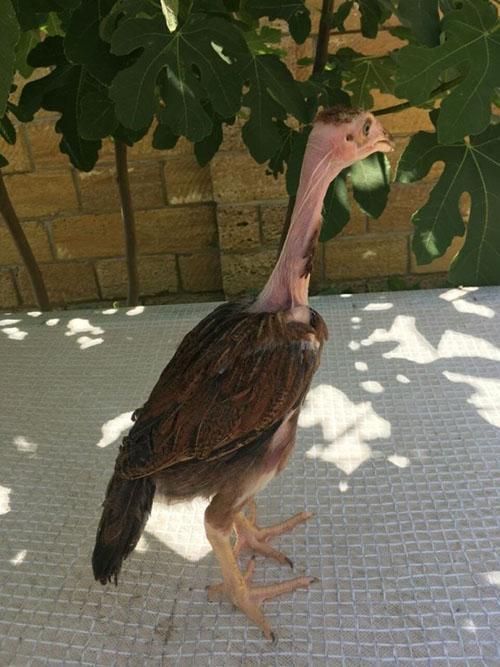 From the hot climate of Madagascar, we got quite scary-looking, but hardy, bare-necked Madagascar chickens. They are distinguished by remarkable health. Even in their homeland, these fighters are used to fighting under the scorching sun or pouring rain and feel good after that. Even chickens are not impaired by bad weather to grow quickly and gain weight.. 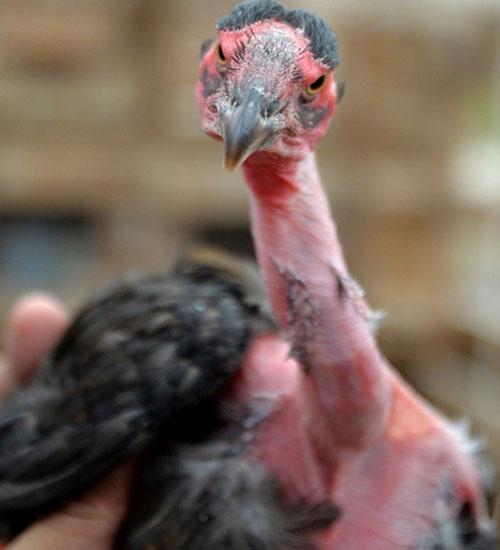 The appearance of a bird is capable of catching up with fear even on a person and is fully consistent with its name:

Bare-necked chickens are mainly bred for fighting, but they are also suitable for food. Young individuals have very tasty meat with a dense structure. It is better not to slaughter the old ones for this purpose, since the meat becomes tough with age..

When growing Madagascars in the Russian climate in winter, they need an insulated chicken coop. The bird does not tolerate cold due to its origin. 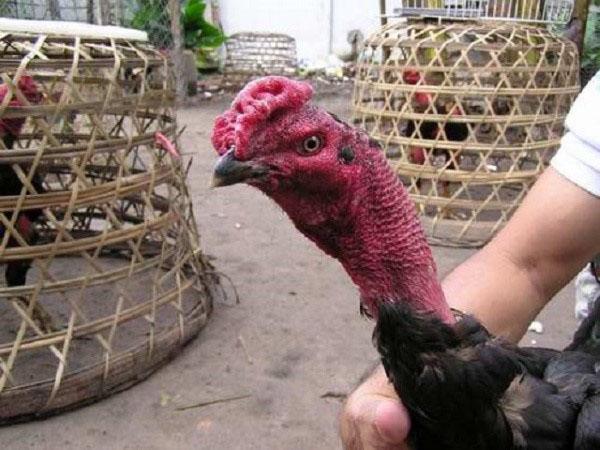 Males can have different weight categories. The smallest weight is 2 kg, large birds gain up to 5.5 kg. Protein diets are often used to build muscle quickly. At the same time, the growth of roosters is impressive and sometimes reaches 80 cm.

The Madagascar rooster has an interesting and two-sided character. This intelligent bird lends itself well to training. In battle, she is cruel and merciless, she is not at all afraid of an opponent and will fight to the end no matter what. At the same time, in relation to his offspring, the rooster wakes up tender fatherly feelings. Often, daddies even replace the brood hen by leading the chickens. The fighters are also friendly to their master.

Due to the increased aggressiveness towards the representative of the same sex, the cocks are kept separately, otherwise they will beat each other. In addition, it is worth equipping them with a kind of treadmill. Without constant physical activity, the roosters become overweight and lose their fighting qualities, being suitable only for meat. 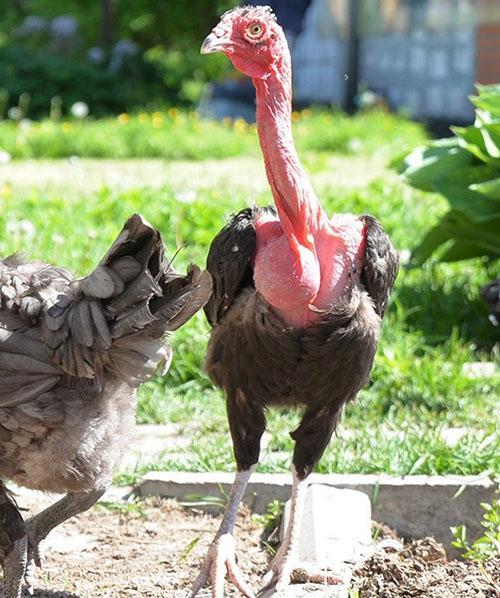 Naked chickens, as usual, weigh less than males – maximum 3 kg. They do not grow above 50 cm in height. Chickens will not please with high egg production: the maximum number of eggs per year does not exceed 5 dozen, and in the first year no more than 3. The egg weighs no more than 65 g.

The breed is obtained by crossing many species. First, a hybrid species called Ingigames was obtained from English and Malay chickens. Then it was improved by crossing it with the Shamo, Cochin Khin and white Malay chicken breeds. As a result, powerful and heavy, but short, chickens with strong paws and an aggressive character are ideal for fighting..

Indian chickens are often raised for human consumption. Their meat is very tasty, and they gain weight well. But upon reaching 3 years of age, the meat coarsens, and fighting skills weaken, so you need to update the livestock.

The breed needs a warm room for wintering – rare feathers cannot warm in winter. In addition, Indian fighting chickens are susceptible to asthma.. 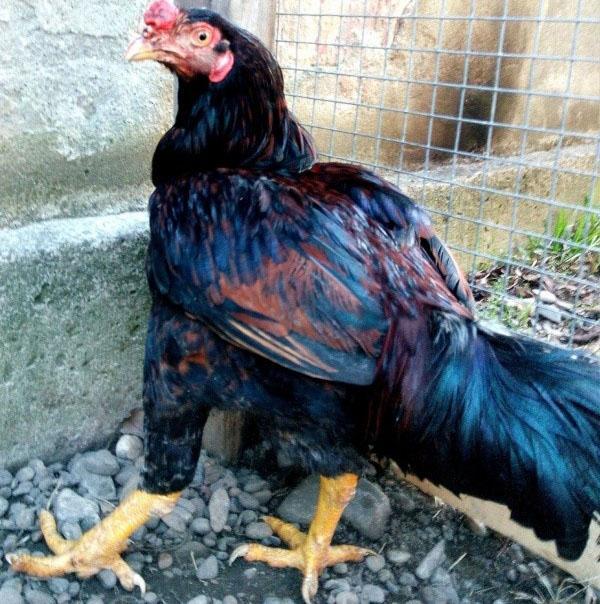 Representatives of the stronger sex are short, but rather large – the weight of an adult reaches 4.5 kg. The structure of the paws allows roosters to use them in battles and deliver tangible blows to the enemy. At the same time, the striker himself demonstrates miracles of dexterity and stability. However, the fighting rooster cannot enter its first battle until it reaches 8 months of age, which requires early incubation and training..

The character of an Indian, to put it mildly, is not sugar. He is aggressive not only towards his opponent in battle, but also towards his neighbor in the chicken coop, so it is better to keep them separately. Even the host’s feeding arms are often affected by bird attacks.. 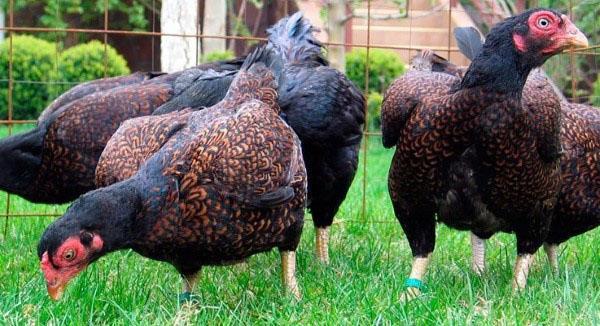 Females are practically the same size as roosters and are only 1.5 kg lighter. As for domestic chicken, they have a lot of weight – up to 3 kg. They make good hens, but egg production is at an average level. No more than a hundred eggs can be collected per year, and only from the age of one year. Their size is no larger than that of ordinary layers (up to 60 g), and the shell is colored light brown. 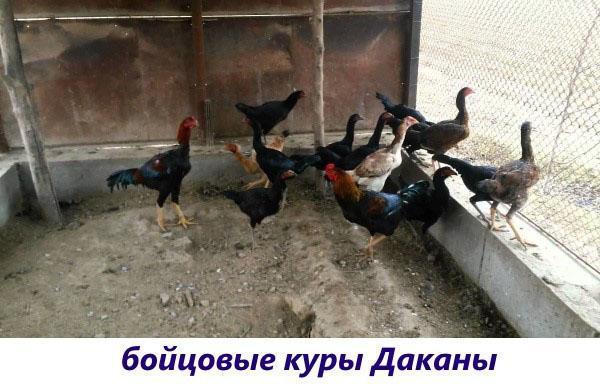 One of the most ancient breeds today is grown exclusively for the preservation of the species. Low percentage of fertilization of eggs, increased aggressiveness of roosters, exactingness to the conditions of keeping … All this does not attract the owners of a private farm at all. But as a decorative and sports form, the Dakans represent ideal, courageous and uncompromising fighters with a beautiful appearance. Their elongated body with thick bright plumage and orange evil eyes will be remembered for a long time, especially if you are the victim of the attack. And this happens quite often.

The breed is also known as the Kulangi fighting chickens..

Already in appearance, it can be determined that these birds do not differ in their complaisant disposition:

Despite the dense plumage, it will not work to grow Kulangs in the northern regions. These chickens will not be able to survive the local frosts. And in other regions, they need a warm chicken coop for wintering..

Another feature of the breed is the ability to fly well. If you do not fence the walk with a high net, it will be difficult to find and collect the bird later.. 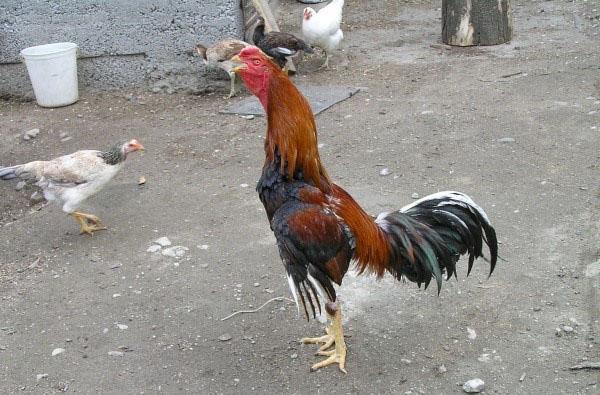 Despite the apparent slenderness, the weight of an adult fighter can reach impressive values. The average body weight ranges from 5-6 kg, but it is often possible to find individuals from 7 to 9 kg in weight. The flattened skull is one of the breed’s advantages, which minimizes combat injuries in the head area..

In battle, the Daqan’s fighting cocks are very emotional and take “to shout”, loudly and expressively intimidating the opponent and commenting on their movements. They always fight to the last, giving the enemy no chance to survive. However, if it seems to the rooster that there is also a threat from the owner, a painful attack cannot be avoided. Moreover, he protects not only himself, but also his herd. These fighting men also fight among themselves, to the death, which makes it difficult to grow them. Roosters need to be separated and kept separate, otherwise they will beat each other, figuring out who is in charge. 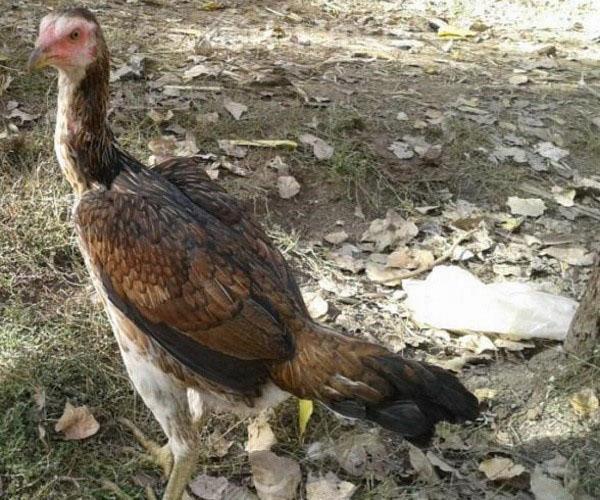 Adult layers are large enough and weigh almost 4 kg, but they are shorter than roosters. They begin to rush in six months, but not productively – only a hundred eggs per year. The eggs are medium, weighing 60 g, with a nutshell. But by the end of 2 years, egg production is declining and replacement is needed..

They make good hens, but there is little sense from this – most of the clutch turns out to be unfertilized. Here’s another reason why they stopped growing them in private farms..

As you can see, fighting breeds of chickens in most cases are large and powerful, or slender and muscular birds, but with a very nasty character. However, in order to participate in fights, it is he who helps them to emerge victorious..

A selection of photos of fighting breeds of chickens 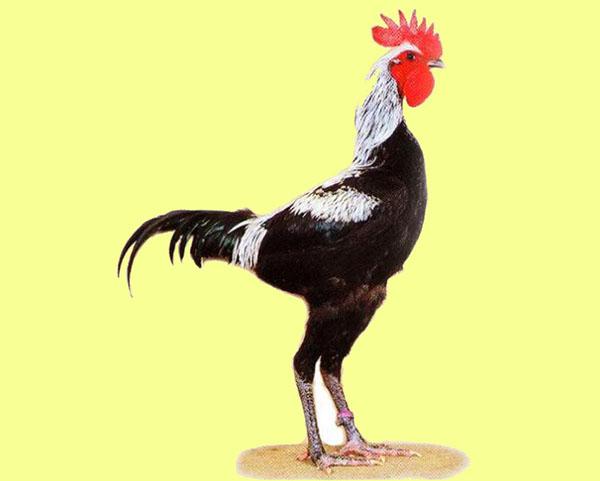 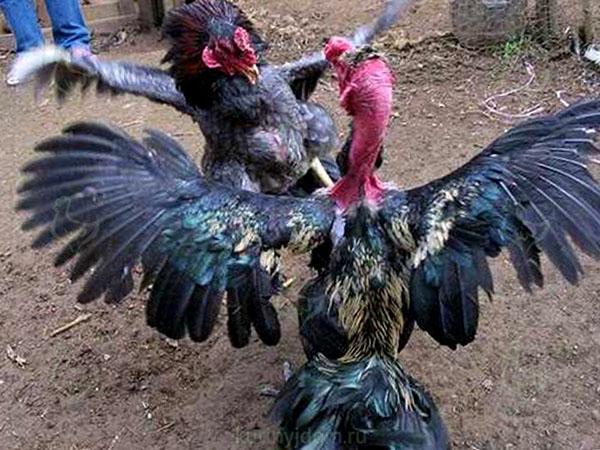 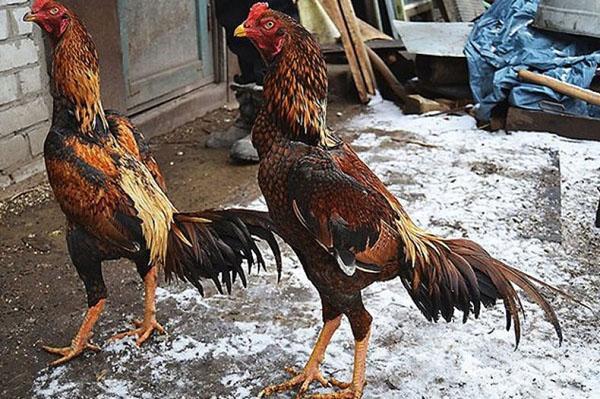 Fighting breeds of chickens in a subsidiary farm – video

Chickens, chickens
Previous Post
Why are peas grown in your garden useful?
Next Post
Pear variety Belorusskaya Late is grown for long-term storage of fruits