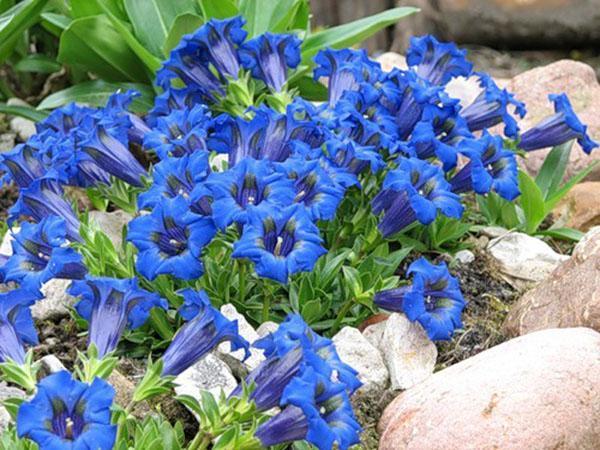 The gentian, a photo of which is often used to create postcards, is not only a spectacular, but also a useful plant. It is a low-growing herbaceous shrub that can be annual or perennial. In nature, this flower grows everywhere, it is absent only in regions with a cold climate, where the soil is hidden under snow for most of the year. At home, it can be grown to decorate a garden or create a living carpet; small flowers will look no less attractive in pots. Gentian is also known in folk medicine – its range of applications includes various diseases of the digestive tract and respiratory system..

What is this plant? 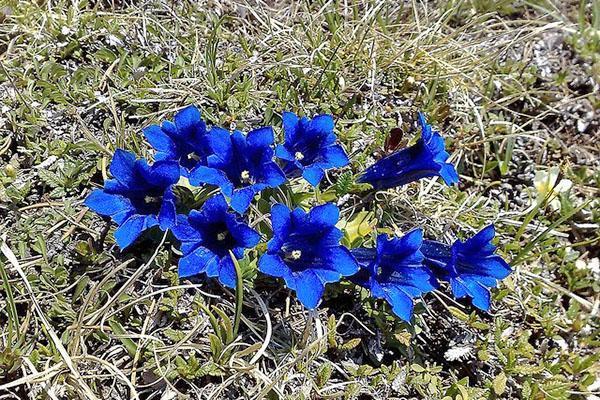 All gentian varieties belong to the gentian family. It is a large group of plants with over 400 species. They do not grow tall – individual bushes can reach up to 150 cm, on average – up to 20-50 cm. Flowers grow in groups. Under natural conditions, they form living carpets on the plains and on the mountain slopes, and at home you can create a similar picture yourself.

Gentian is an open field herb that can be grown in almost any conditions.

Its main feature is bright flowers. They are small and can range in color from yellow to bright blue. A large number of inflorescences are formed on one bush, which appear and disappear during the warm season..

During the period of active flowering in the photo, the gentian looks bright and impressive. Its varieties may differ from each other, but they are all collected in one group due to similar botanical characteristics:

Visually and in the photo, the gentian is different. Some varieties are blue, blue or purple in color, others can acquire yellow and other shades. The flowering time also depends on the gentian variety. Allocate early varieties that begin to bloom in spring, medium and late – only in summer or autumn.

Before choosing a variety, it is important to pay attention not only to its appearance, but also to the requirements for the climate and the flowering period..

Growing at home and care 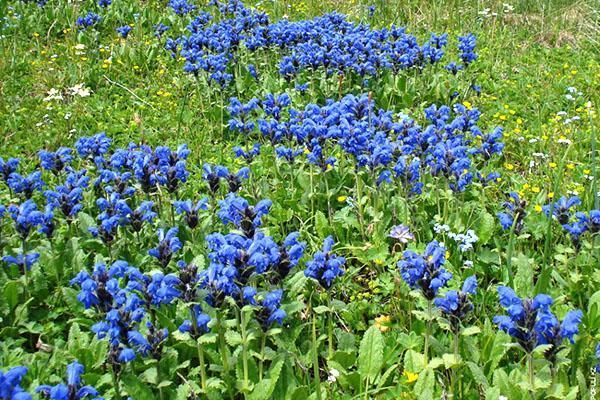 Under natural conditions, gentian can grow in harsh conditions and adapt even to cold climates, so caring for it is simple. However, in nature, plants choose only those areas in which they will grow most comfortably. When growing at home, you should take care of this yourself.. 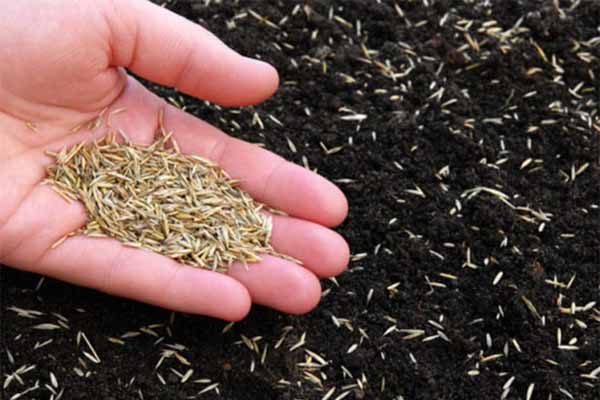 The gentian reproduces in two ways – vegetatively and with the help of seeds. The second method is suitable for all varieties, and you can harvest the seeds yourself. They can emerge within 6-12 months.. 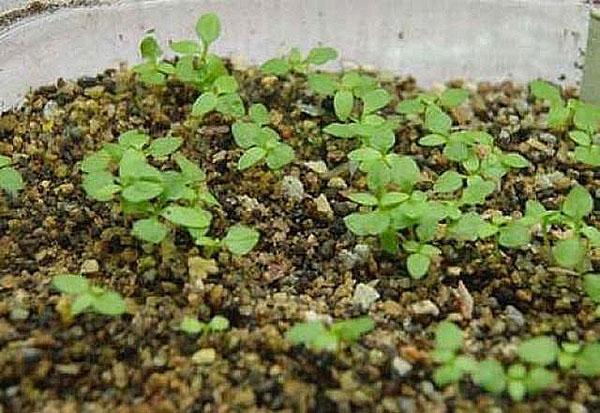 The process of growing gentian from seeds takes place in several stages:

Vegetative propagation is not suitable for all varieties. 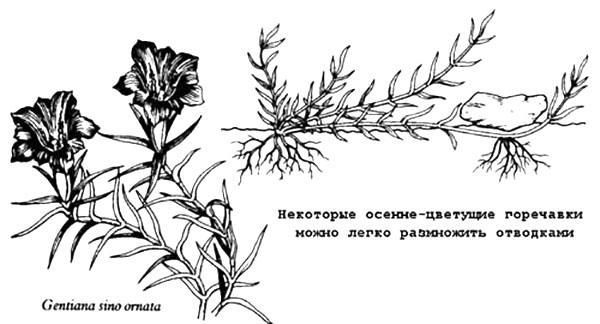 Some of them can be propagated by cuttings. To do this, a shoot with several leaves is separated and placed in water until roots appear. Then it can be planted in open ground.. 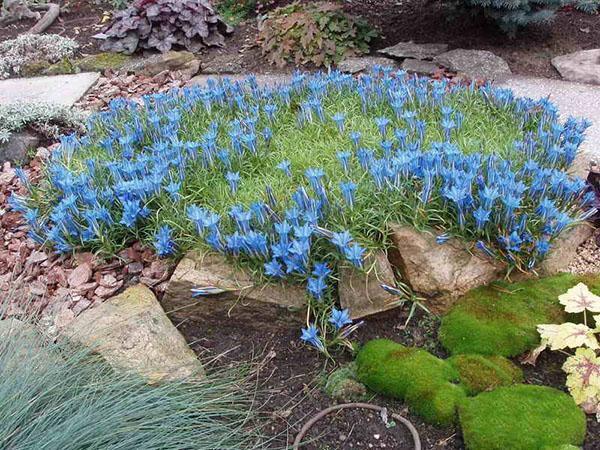 Gentian care depends on its variety, but some requirements are suitable for all its varieties: 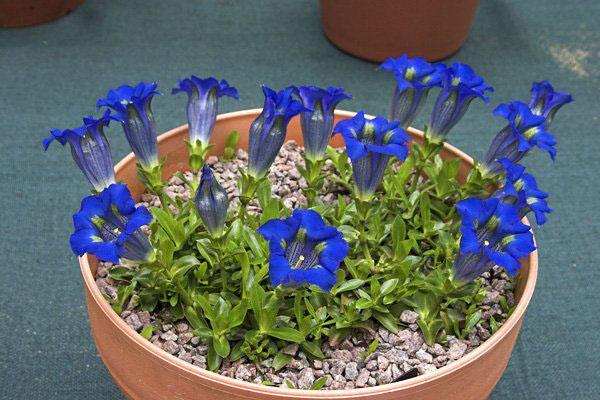 There are both annual and perennial varieties of gentian. Even those varieties that grow for several years tolerate temperature extremes well and are frost-resistant. They do not need to be pre-prepared for winter or covered from snow.. 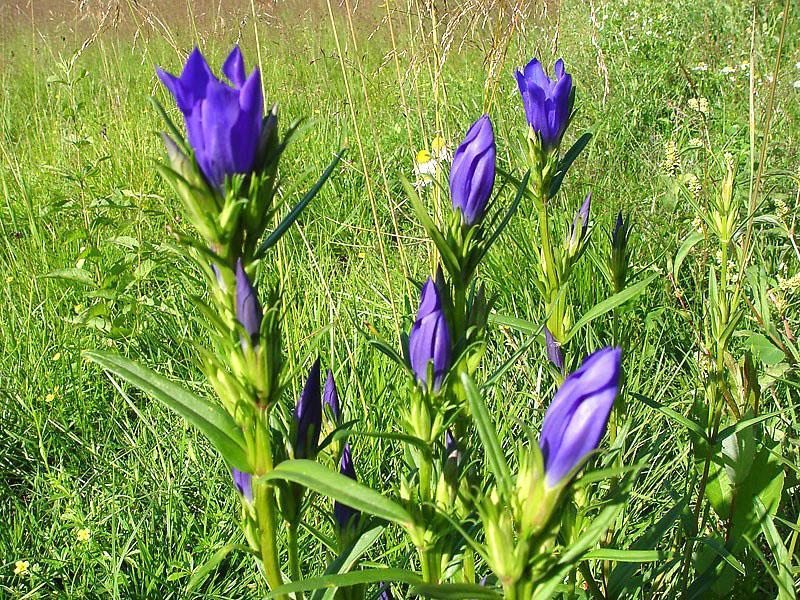 The medicinal properties of gentian are due to its composition. It is used by healers against various diseases of the gastrointestinal tract, respiratory and other systems. As active ingredients, this plant contains glycosides – biologically active components that are involved in various vital processes.

The gentian has been used to treat a number of conditions:

Decoctions of gentian have proven to be effective in improving appetite and as a general tonic. They are also taken for arthritis of various origins, for wound healing and to normalize digestion..

Despite the wide spectrum of action of gentian, it is not suitable for all patients. The herb can cause allergic reactions to any of its active ingredients. They are manifested by an increase in body temperature, a deterioration in well-being, swelling of the mucous membranes and even the appearance of a rash on the skin. In addition, in case of serious disturbances in the work of internal organs, the decoction will not be as effective as pharmaceutical medicines..

The medicinal properties and contraindications of gentian should be discussed with your doctor. Like any other folk and medical methods, it should be used only according to indications and after a preliminary examination.. 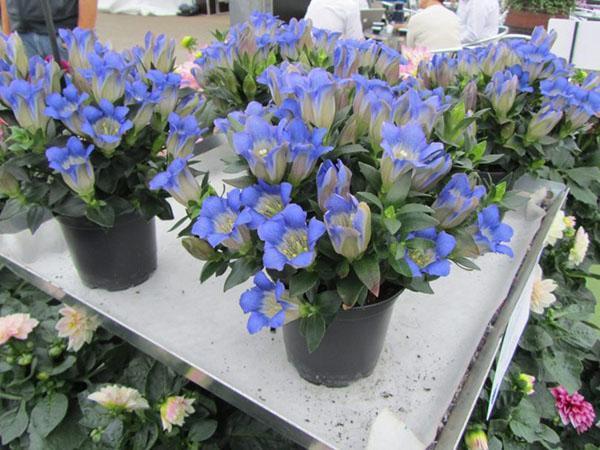 The gentian family has more than 400 varieties and varieties. This diversity is due to the fact that flowers grow on different continents and are forced to adapt to different climatic conditions. For home cultivation, you can choose any of the varieties – it will not be difficult to provide the color with comfortable conditions. 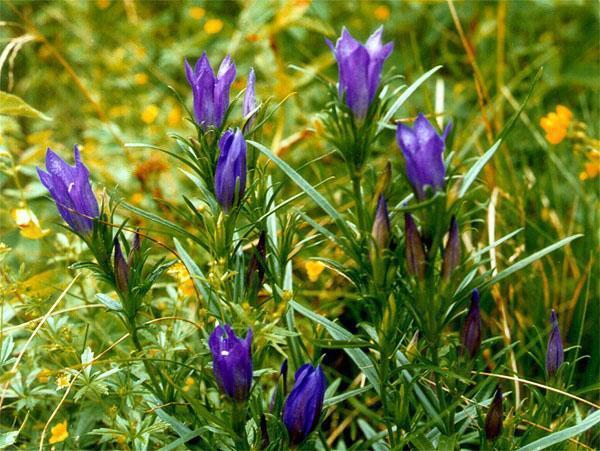 The pulmonary gentian is a short plant that can grow up to 50-60 cm in height. It grows in open meadows and plains and tolerates frost well. The flowers are single, bright blue or light blue. The shrub needs abundant watering, in nature it often grows in swampy areas. 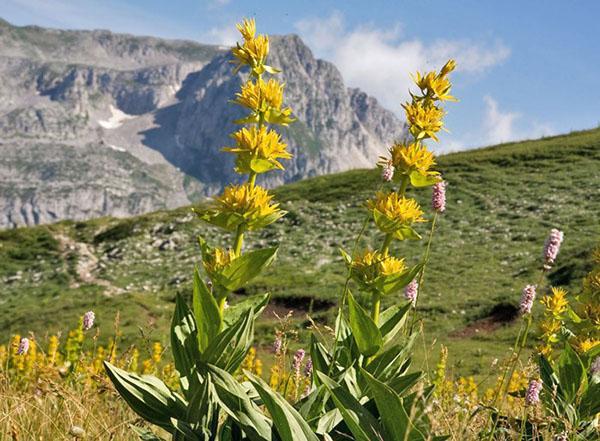 The yellow gentian is one of the largest varieties, it can grow up to 1.5 m. Differs in unusual flowering – individual flowers in complex inflorescences. They are colored bright yellow and appear in the second half of summer. In the photo, the yellow gentian looks bright and impressive.. 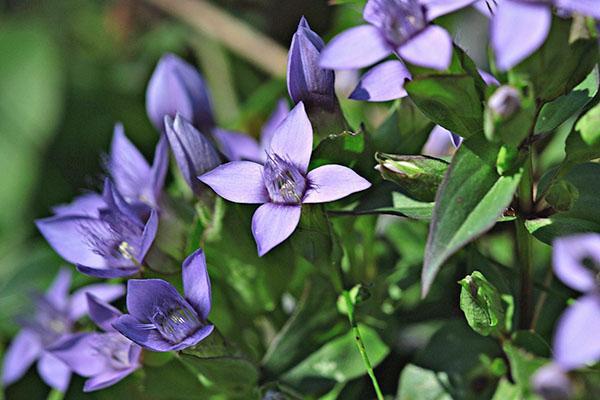 Cross-leaved gentian (cruciform) belongs to the late varieties. It has a straight, strong stem up to 50 cm in length, densely covered with green leaves. The flowering period begins in the second half or late summer. The cruciform gentian can be recognized by the characteristic color of the petals – they have a turquoise, purple or purple hue. 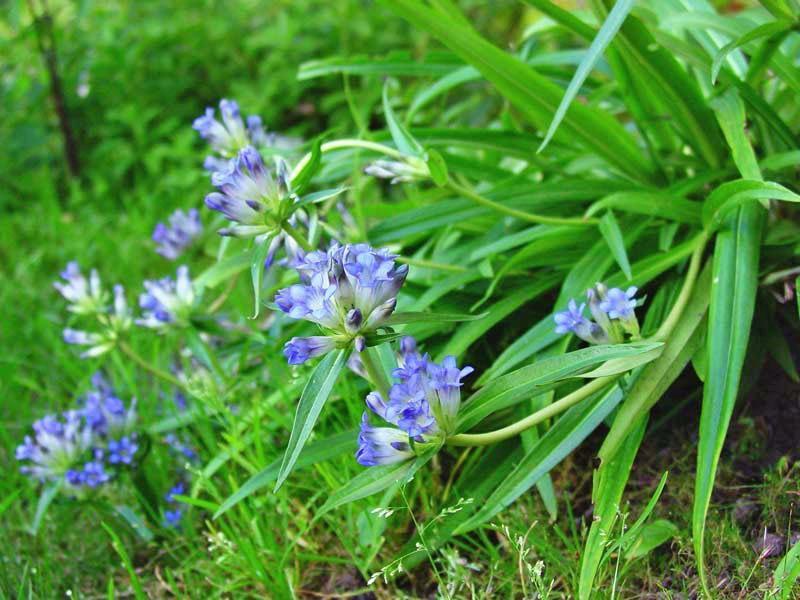 Daurian gentian is also one of the medium varieties that blooms in the second half of summer. Unlike other varieties, its stem is not strong enough, but it can reach 50 cm or more. Tall shrubs may have shoots that are located on the ground. Leaves are pale green. Flowers are single, large, have a bright blue color. 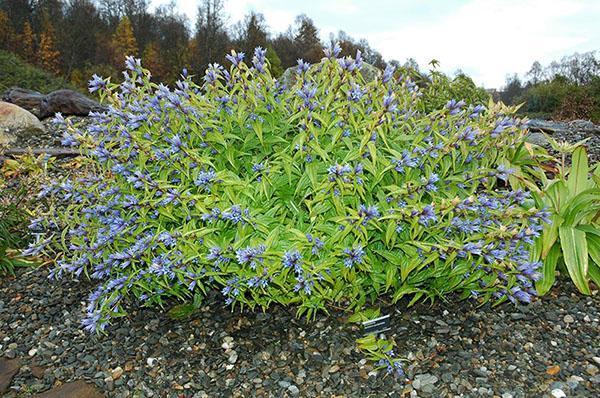 Gusset gentian is a late variety. Its stems are tall, straight, and can grow up to 80 cm with proper care and maintenance. In nature, it begins to bloom at the end of summer, and the period of its flowering affects the beginning of September. The variety has an unusual petal shape. They are pointed, can be blue with a purple tint, or be completely white.. 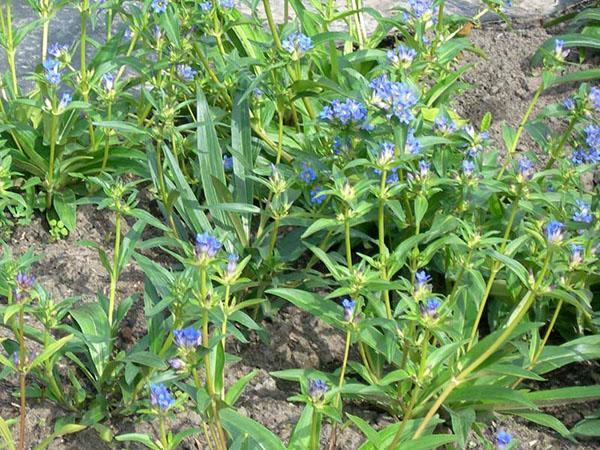 Large-leaved gentian is a short plant, its largest representatives grow up to 70 cm. The name is explained by unusual leaves. They are narrow and located at the base of the plant and in internodes, each can be up to 20 cm long. Single inflorescences are elongated and have a characteristic shape. Petals reach 2 cm in length, inflorescences practically do not open. The main stem is strong, additional shoots can be soft and fall down to the ground. Bloom comes in summer. 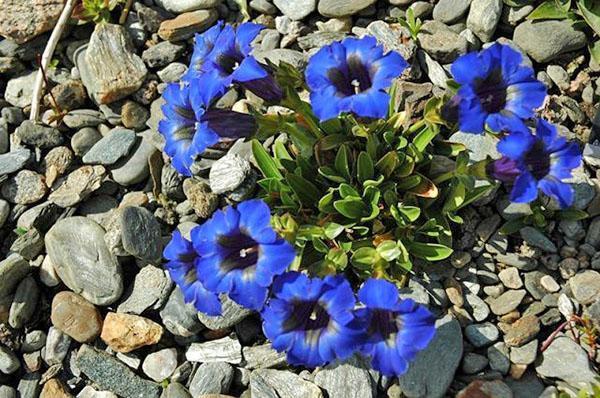 The stemless gentian (Kokha) grows naturally in mountainous regions. Its stem practically does not rise above the ground and can reach a maximum of 15 cm. The variety belongs to the early ones. Abundant flowering begins in early May and can last until mid-June. Inflorescences are small, have a deep blue tint. This variety is well suited for creating a living carpet in the local area.. 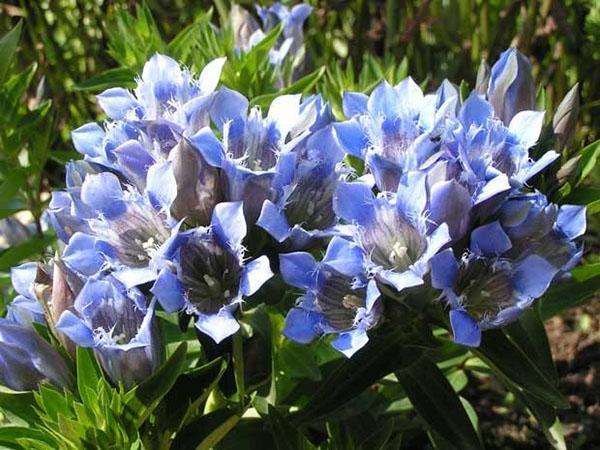 Seven-part gentian is one of the most unpretentious varieties. It adapts to any climatic conditions, easily tolerates frost. The inflorescences are blue with a slight lilac tint. The plant begins to bloom at the end of June.. 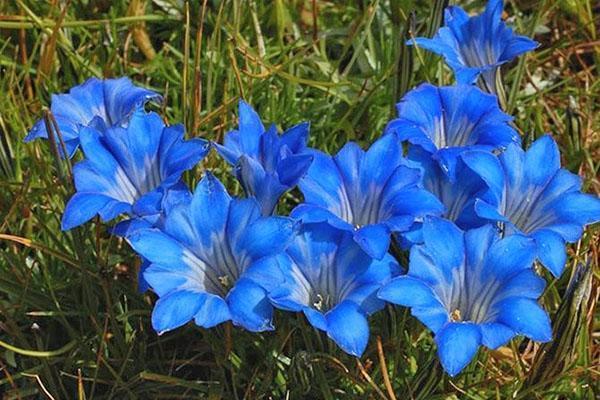 Spring gentian belongs to the early varieties. It does not reach large sizes – an average shrub grows only 10-15 cm. Flowering begins early, the first inflorescences appear in the middle or late spring, when the air temperature stops dropping at night. Flowers are small, colored blue or blue, may have a purple hue.

Gentian is a huge number of varieties and varieties that are common throughout the globe. In folk medicine, it is collected and harvested for the treatment of a huge number of diseases, and is also used as a fortifying and immunostimulating agent. However, the appearance of the gentian during flowering allows it to be used to decorate flower beds, house plots and grow houses in pots. Adult annual or perennial shrubs bloom profusely, forming a living carpet with flowers of different shades.