Acquaintance with cosmeia by photos and descriptions 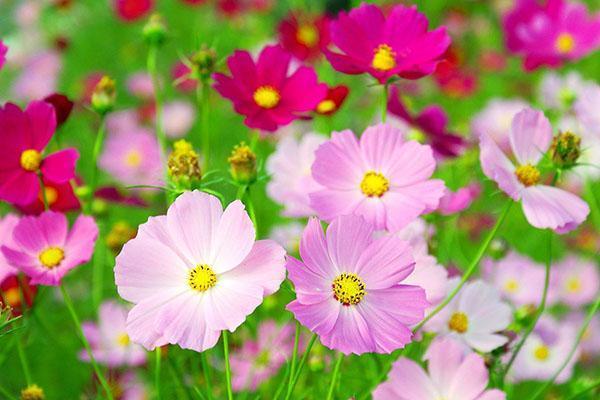 A bright flower known to everyone since childhood, which grew in flower beds near the house or in the country, is loved by many. They love her for her unpretentiousness, riot of colors and simplicity in planting and care, as well as for a long flowering period: from late June until autumn. Photos of cosmos flowers and descriptions of its most popular types will be considered below. 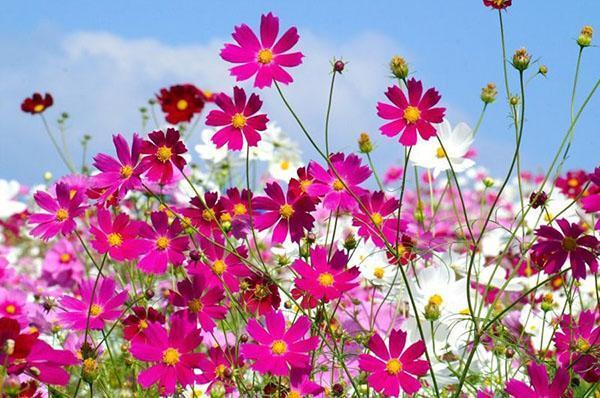 Kosmeya (Cosmos) is a common plant of the Aster family, which came to us from Mexico, Brazil and Central America. For a long time, the plant was not perceived as flowers, considering it an ordinary grass. But thanks to the work of breeders, it was possible to breed varieties that now adorn gardens and city flower beds with a riot of colors throughout the summer..

There is a popular name for cosme – “disheveled young lady”, which was given to the flower because of its appearance: thin curly foliage resembles disheveled curls, the tips of which are dotted with bright inflorescences.

There are annual and perennial types of cosmos. In total, there are about 25 varieties of this flower, but the best of all have taken root and are popular with us sulfur-yellow kosmeya and double-pinned kosmeya. Regardless of the species, the plant loves light, but it takes root best of all and pleases with lush flowering longer if the flower is planted in partial shade.

If you plant a kosmeya in the bright sun, it will quickly fade. In a strong shade, the plant will bloom poorly.

For planting a plant, it is worth choosing light, breathable soils. Cosmey can be planted with seeds or seedlings. The first option is suitable for the most common simple varieties. They are sown directly into the ground in April-May, when the ground has already warmed up enough. After two to three weeks, seedlings appear, which, when they reach 5 cm, must be thinned out. 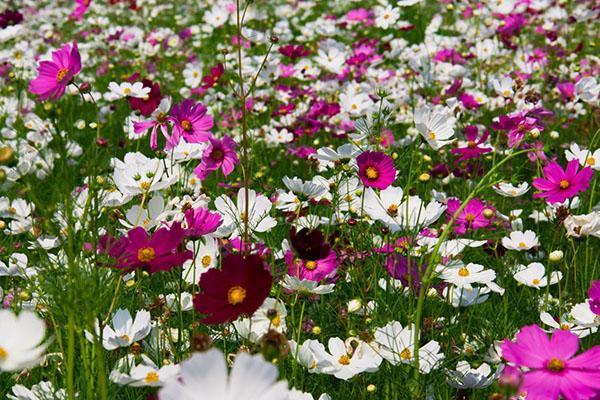 Selected, hybrid varieties are grown through seedlings. Planted in this way, the plants begin flowering from the second half of July. Kosmeya, which was sown directly into the ground, blooms in August. So that the flower does not lose its decorative properties, it is necessary to remove wilted inflorescences. Cosmey of any kind is watered until it forms into an adult plant. Further, moderate watering is carried out if necessary, that is, with dry summers and lack of rainfall.

It is an unpretentious, cold and drought-resistant plant. Photos of cosmos flowers will allow you to appreciate all the beauty of the flower and understand the reasons for its popularity in landscape design and the arrangement of personal plots and flower beds.

The popularity of the plant is also due to the variety of its sizes. There is a tall, undersized kosmeya and dwarf kosmeya, which are often grown in flower pots at home..

Simple varieties of cosmos are most often tall, spread over the soil, and therefore they must be tied up. But breeders have bred varieties of undersized cosme and dwarf cosme, which form neat, compact flower rosettes, easily adjacent to other flowers in the flower bed. And although more than 20 species of cosme are known, plants have become widespread, which will be described below.. 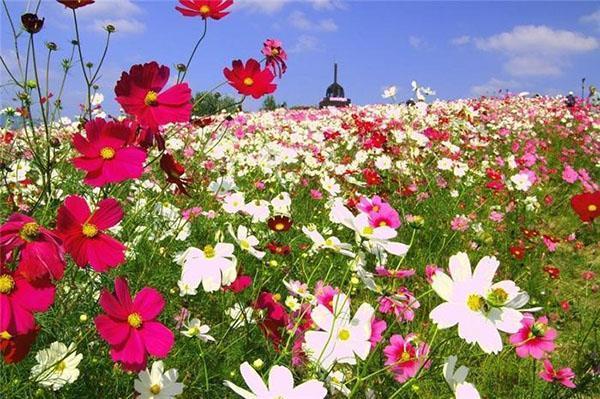 The most popular plant variety is the Double-Feathered Kosmeya, whose homeland is the mountainous regions of Mexico. This is an annual plant, the stems of which sometimes reach a height of more than 1 meter. Inflorescences of white, pink and purple colors, up to 10 cm in diameter.Most often on flower beds you can see just such flowers.

Stems are erect, dense and branched, leaves are feathery and twice dissected. That is why this variety received such a name, and the plants – the openwork appearance of greenery. The flowers of the double-feathered cosmos resemble chamomile in appearance, collected in baskets of many inflorescences. Blooms profusely from June to September. The most common annual, grown to decorate flower beds. Seeds ripen well, germination persists for 3-5 years.

Thanks to the work of breeders, more refined varieties of double-pinnate cosmea with a less catchy color range and smaller inflorescences were bred. Tall varieties of cosme are well suited for cutting. The photo of cosmos flowers shows what a beautiful and bright plant it is.. 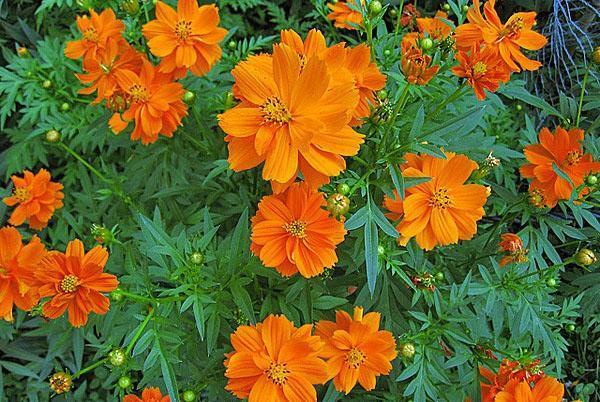 Unlike the double-feathery one described above, the sulfur-yellow kosmeya is more thermophilic, and begins to bloom only in July. She has wider leaves, and inflorescences of warm colors: yellow, orange or red. The very word sulfur in its name means yellow shades of flowers. Their sizes are small, up to 6 cm in diameter, but the petals grow in two rows. Therefore, the flower, which is also called the cosmos, is considered semi-double.. 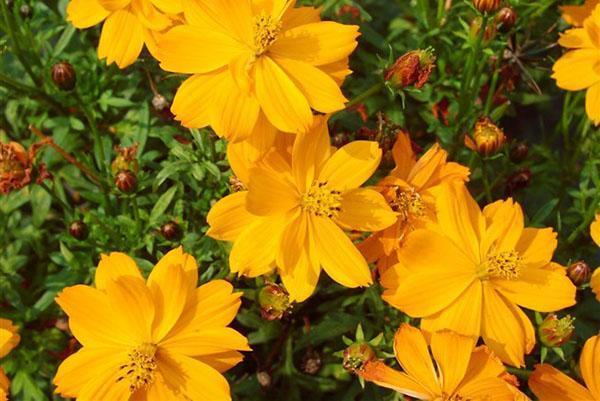 Depending on the variety, the height of the stems also varies: they grow from 30 centimeters to one and a half meters. Kosmeya Sulfur-yellow is drought-resistant and therefore can be grown on the sunny side. Forms many buds, blooms violently, after withering, the petals fall off. The plant gives abundant self-seeding, it is also very easy to collect the seeds, there is no need to clean them. Flowering ends in October.

It is best to germinate the seeds of sulfur-yellow cosmos in the light, and for this you do not need to deeply bury them in the soil.

Outwardly, the plants of this species resemble a frozen fireworks of bright yellow flowers: the stem is thin, branched, the branches are spread out in different directions, slightly lowered. 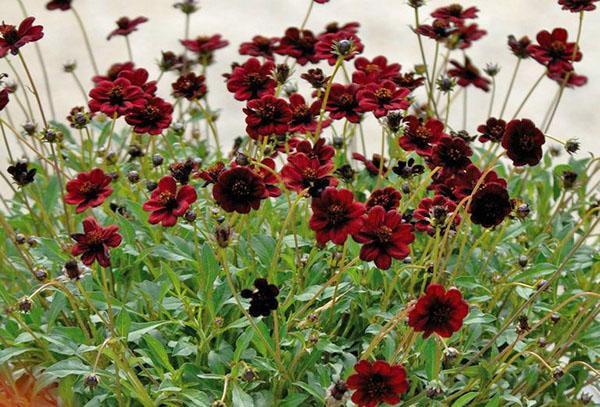 Another type of plant is perennial kosmeya Chocolate. The flower is unique, interesting, but not so widespread. Its flowers are dark red, burgundy, and therefore it is also called black cosme. Its homeland is Latin America and Mexico, and therefore this species is very thermophilic in comparison with those described earlier..

It is preferable to grow it in the southern regions, since the cold resistance of this variety is very low. If black kosmeya grows in areas with a northern climate, it is grown as an annual outdoors or indoors as a perennial. Loves loose, fertile, well-heated soil and enough sunlight. 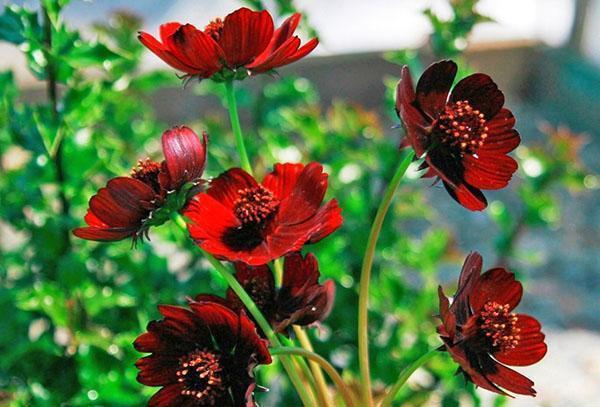 The plant got its name due to the aroma of chocolate exuding it. People have always tried to pick a flower as a souvenir that emits such an alluring and sweet smell. And therefore, by the end of the last century, only a few bushes of perennial chocolate cosme remained in Mexico. But thanks to the labor of breeders, it was possible to avoid the complete destruction of this unique plant..

Cosmos should not be fertilized too much, especially with nitrogen fertilizing, as this leads to an increase in green mass to the detriment of flowering.

Kosmeya Chocolate is a perennial plant, but given its weak winter hardiness, during the cold season it must be brought into the house or greenhouse. Blood-red, scarlet, almost black flowers with a diameter of 4 cm are strewn with branches of the plant, which reach a height of 40 cm to one and a half meters. Black cosmos can also be grown through seedlings as an annual. 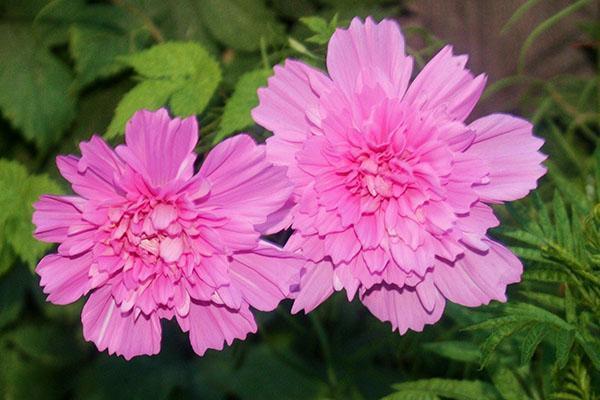 As a rule, kosmeya is a plant with chamomile-like flowers of different diameters. But given the popularity, many different varieties and its hybrids have been bred. This is exactly what Kosmeya Terry is: it is not a separate variety, but a plant variety. Its difference is that the petals grow in several rows, which makes the flowers look terry. The rules for planting and caring for it are the same as for other plant species..

You can sow directly into the ground or in boxes for seedlings. Terry kosmea has very small seeds, so you shouldn’t bury them too deep, it is enough to lightly sprinkle them with soil. To enhance flowering, you need to regularly remove wilted inflorescences. Depending on the variety, the flowers of terry cosmos can be of different colors, and they will delight until the very frost. 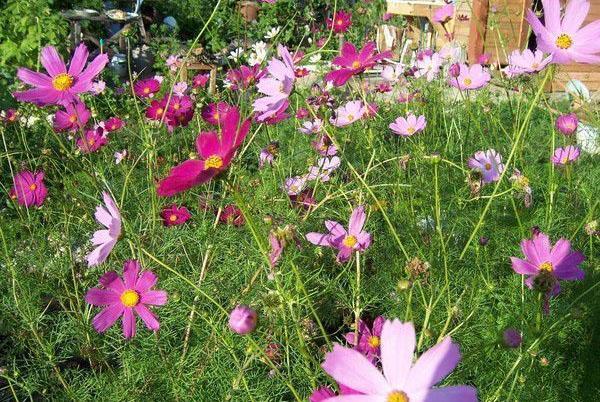 Light-loving, cold-resistant plant, not demanding on the composition of the soil. Stems of cosmea Sensation reach a height of 90 cm, and the plant blooms with white, pink, carmine flowers of a rather large size, up to 10 cm in diameter. Inflorescences are located singly at the end of the stems. Well suited for planting as a natural fence, decorating walls, fences, in the background of flower beds and for cutting. The scent of cosmos flowers Sensation attracts butterflies and bees to the garden. This is a type of double-feathery cosme with interesting curled petals. It is for this feature that the plant got its name: kosmeya Shell. These are sprawling bushes with many shoots. The characteristic openwork foliage and flowers of white, pink and purple. Possesses high decorative properties, will decorate any garden, suitable for cutting. Cosmos varieties Shell are unpretentious in care, bloom from June to autumn. They are planted both as seeds in open ground and through seedlings. 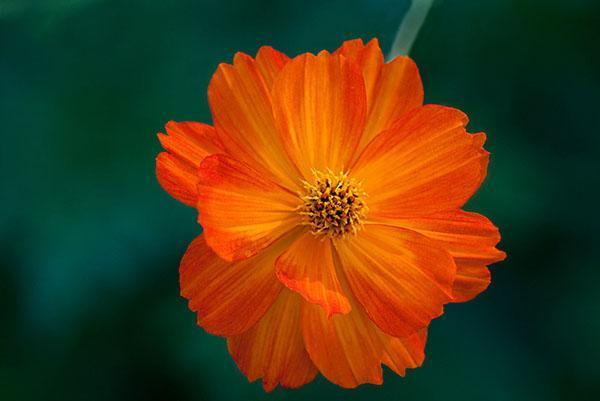 A popular variety of annual plants is the Orange Kosmeya. Differs in bright, rounded inflorescences of sunny yellow-orange color. Stems are strong, herbaceous, from 30 to 120 cm high with graceful, lacy leaves and semi-double flowers up to 6 cm in diameter.. 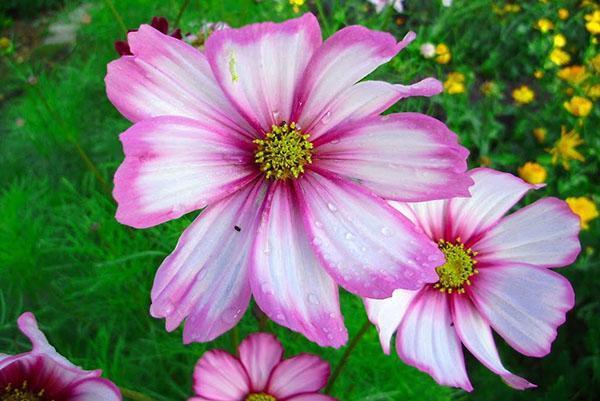 An annual plant with stems up to 80 cm high, growing in a lush bush with openwork leaves. Kosmeya Pikoti is famous for its unusual color of flowers: white petals are framed with a carmine-red border of varying degrees of intensity, the diameter of the inflorescences is from 7 to 10 cm. It blooms intensively from July until the first frost. The bright flowers of the Pikoti cosmos will decorate any flower garden, will be an excellent decor for the fence and will look great in a vase. The variety is easily propagated by self-sowing.. 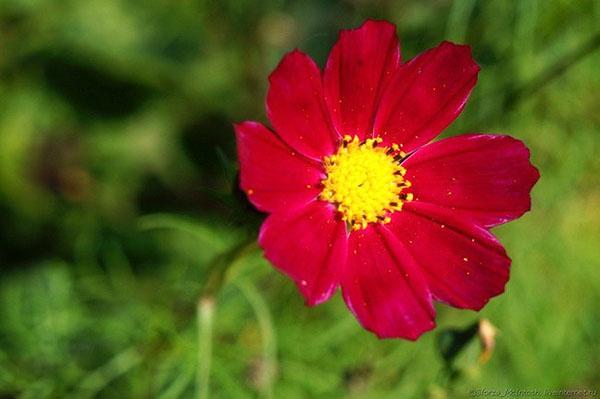 Another unpretentious plant variety is kosmeya red Cardinal. A tall bush with thin, graceful foliage, the stems are densely branched, covered with large red flowers. Blooms all summer until September, grows well on poor soils. This bright plant is used as a high curb for group plantings, self-seeding.

After looking at the photos of cosme flowers from this article, you can be sure: whatever variety you choose for your garden, you will end up with bright, multi-colored flower beds that delight not only with color, but also with a pleasant aroma. At the same time, no special efforts are required to grow cosmos flowers, and therefore any summer resident and amateur florist can grow them..