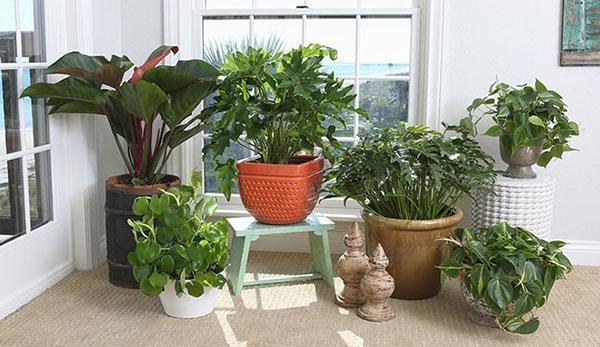 It would seem that in the 21st century, science should know everything about the plant world. However, numerous species of philodendrons still continue to amaze scientists, become the cause of their disputes and even revise the accepted classification of plants..

The reason lies in the rare diversity and variability of the indigenous inhabitants of the tropical zone of South America, Oceania and Southeast Asia. Today, botanists have nearly a thousand species of philodendrons. They differ from each other in the size and shape of the leaves, lifestyle, colors and other qualities. It is not surprising that plant lovers are happy to “tame” the inhabitants of the humid tropics. Descriptions and photos of the most common types of philodendron when growing a house will help you navigate easier in their colorful kingdom. 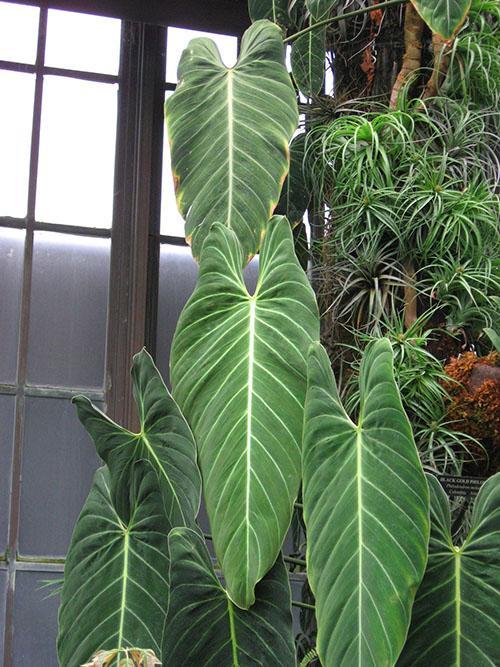 In the foothills of the Colombian Andes, in nature there is a golden-black philodendron with large oblong-heart-shaped leaves and powerful, but fragile stems, densely covered with aerial roots. This type of philodendron is a typical liana that climbs the upper tiers of the rainforest in the open air. The culture attracted lovers of exotic plants by the size and original color of the foliage. The leaf plate has an average length of 60 cm. Adult leaves are dark green, with a velvety sheen and noticeable, almost white veins. Young foliage has a brownish copper tint and petioles of the same color. 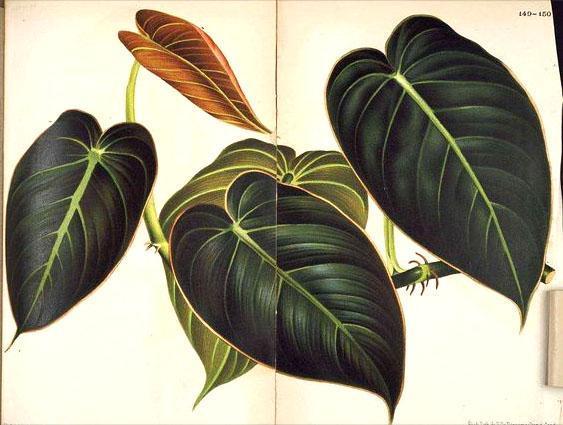 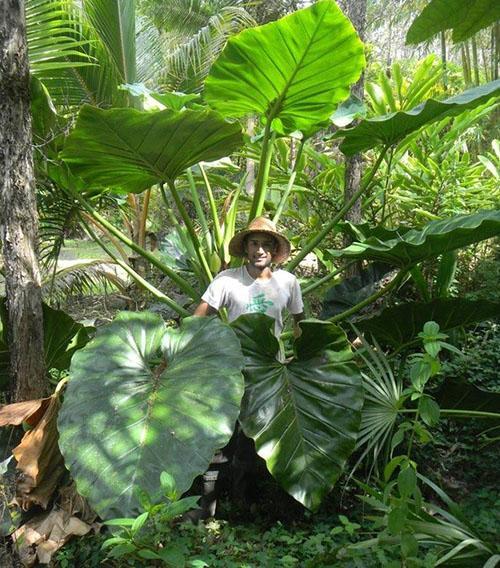 The largest representative of the genus of philodendrons is rightfully considered the giant philodendron, native to the islands of the Caribbean and a number of regions of South America. Living under the crowns of a tropical forest, these plants reach a height of 4-5 meters, and their rounded-heart-shaped leaves can grow up to 90 cm in length.

It is not surprising that such a remarkable species of philodendron was discovered in the middle of the 19th century, and today it adorns the best botanical gardens and greenhouses in the world.. 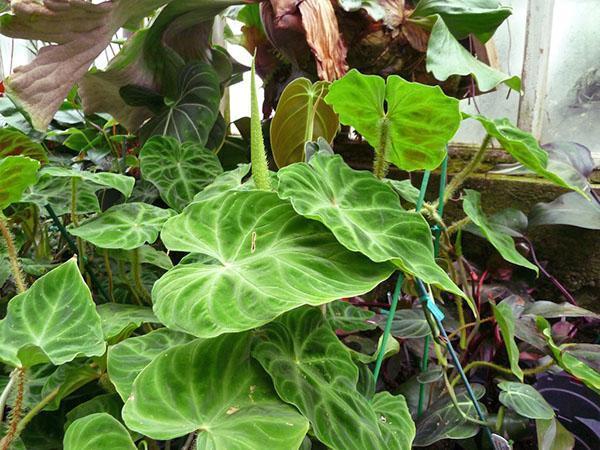 Among its fellows, the warty philodendron stands out for its versatility and the unique appearance of the leaves. If other types of philodendrons rarely change their habits and are either epiphytes or terrestrial plants, then this plant easily adapts to any conditions. It can be found both under the crowns of trees, and on them. Climbing lianas easily root in the ground and find food on the branches. 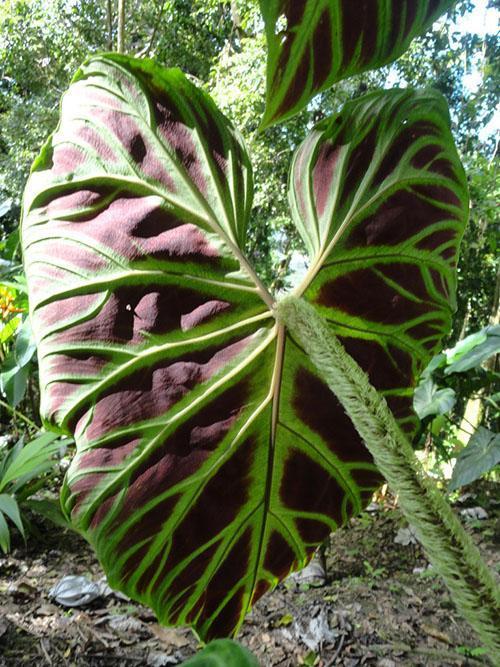 The decoration of the plant is its heart-shaped patterned leaves. Moreover, a purple or brownish ornament formed by green veins is not on the front, but on the back. A somewhat compressed leaf plate 15–20 cm long is held on a long petiole covered with a greenish pile. 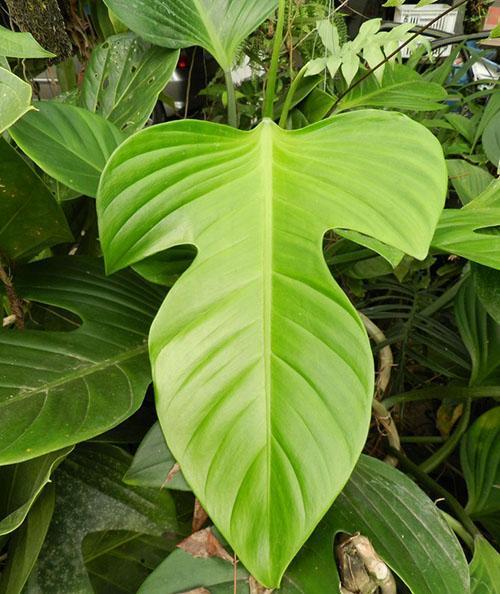 As they mature, the leaves of many philodendron species undergo an amazing metamorphosis. From lanceolate or cordate, they turn into pinnate, finger-like or lobate. No exception – guitar philodendron.

This liana, which grows up to 4 – 6 meters in nature, is almost half the size in a pot culture. But at the same time it does not lose the ability to transform. And adult plants amaze with bizarre three-lobed leaves that reminded botanists of the appearance of an ancient Greek musical instrument, after which this type of philodendron was named. 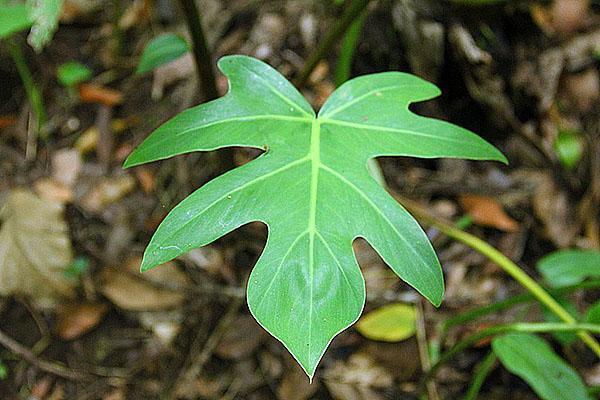 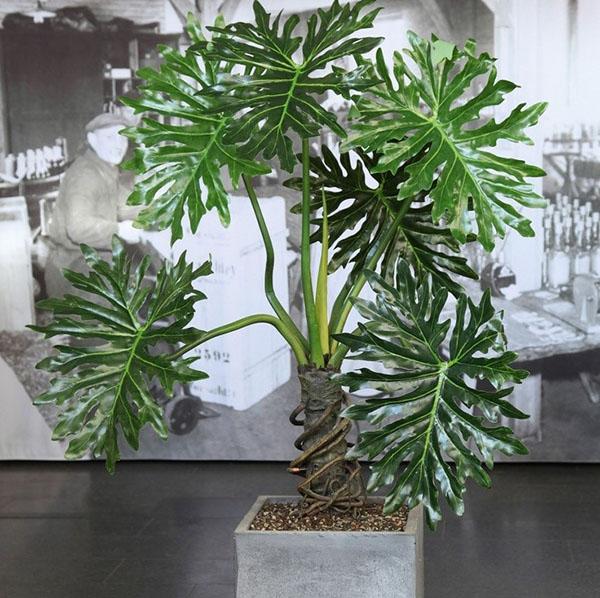 This species has many names and serves as an excellent illustration of the story of decades of confusion in the classification of philodendrons. Most often, flower growers know the plant under the names of Philodendron, double-peristalis, Sello, or double-peeled.

If the name Philodendron Sello is given in honor of the famous explorer of flora and naturalist, then the other names are a tribute to the unusual shape of fancifully cut multi-lobed leaves reaching a length of 40–70 cm. 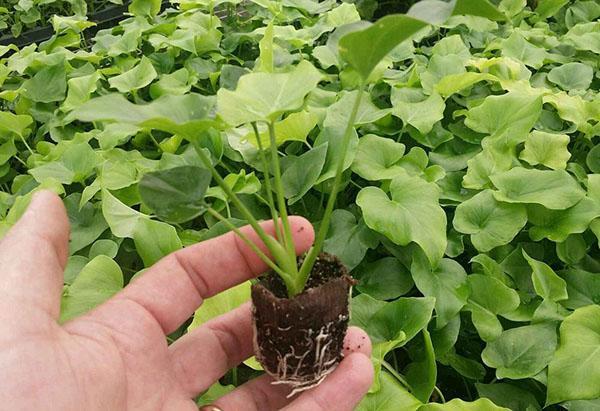 Interestingly, the very young Sello philodendrons, like other varieties, have a solid, pointed, heart-shaped leaves. In addition, the bipinnate philodendron is a rare variety that has long been used on the farm.. 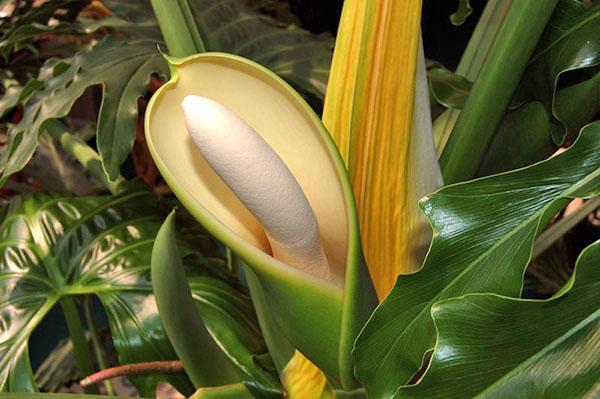 Botanists who have studied the Sello philodendron have noticed that during flowering, the temperature around the anthers inexplicably rises by almost 13 ° C. As a result of this phenomenon, the sweetish-honey smell increases sharply, which literally attracts pollinating insects to the plant. Juicy berries of Philodendron bipinnate ripening on the site of faded ears are edible. 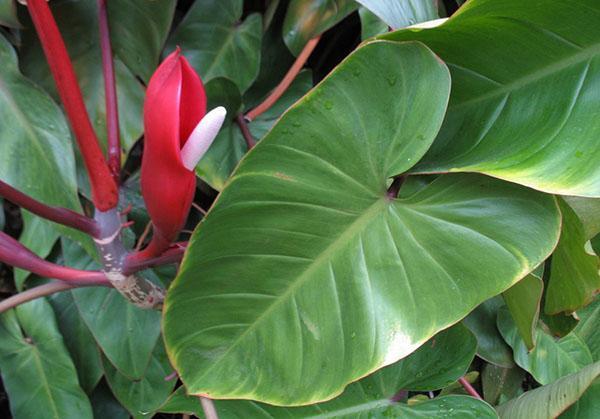 Another liana in the constellation of philodendron species for home cultivation is the blushing philodendron, which gave growers a lot of varieties with original, including variegated, heart-shaped or pointed-ovoid leaves. 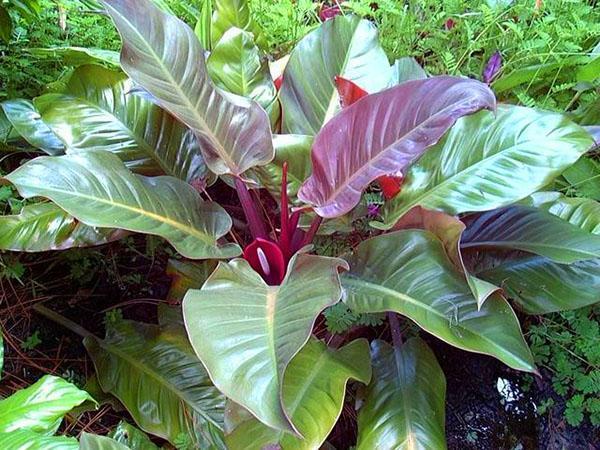 The name of the plant was given by the reddish petioles, internodes, and in some cases the leaf plates of this climbing, almost non-branching liana. 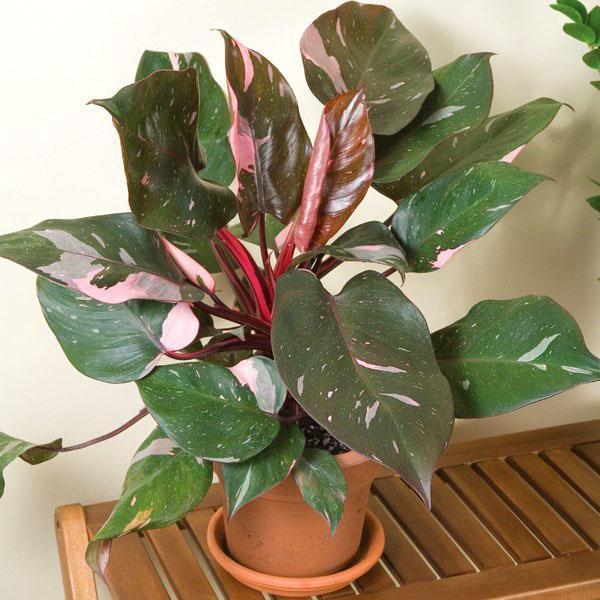 Noticing an unusual shade for other philodendrons, breeders at the moment have received a lot of interesting varieties with pinkish, picture-green, densely purple and marble leaves. 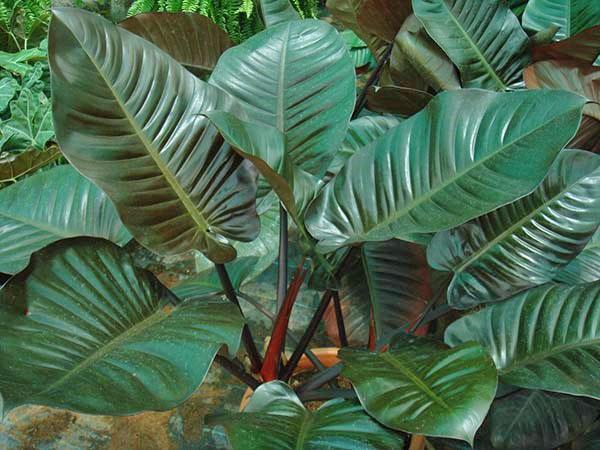 In addition to increased decorativeness, the cultivated varieties of the blushing philodendron have more compact sizes and better adaptability to room conditions.. 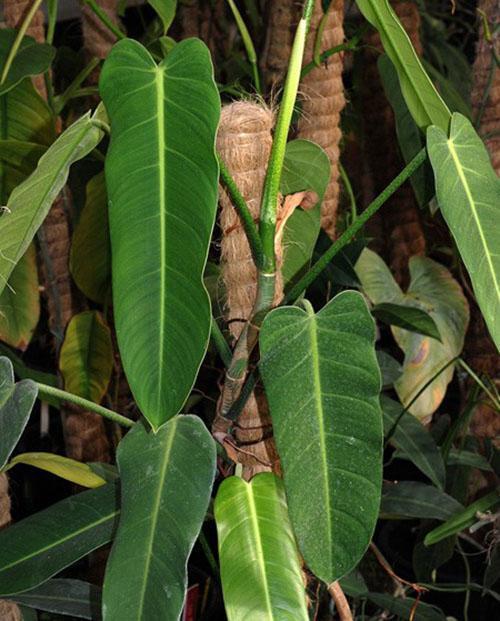 This species of philodendron first came to the attention of scientists in 1849, and since then, thanks to the elongated whole leaves and unpretentiousness, the indigenous inhabitant of many parts of Central America has become a welcome guest of greenhouses and botanical gardens..

For home cultivation, arrowhead philodendron is too large, because its leaves can reach a length of 70 cm, and petioles – 1 meter. 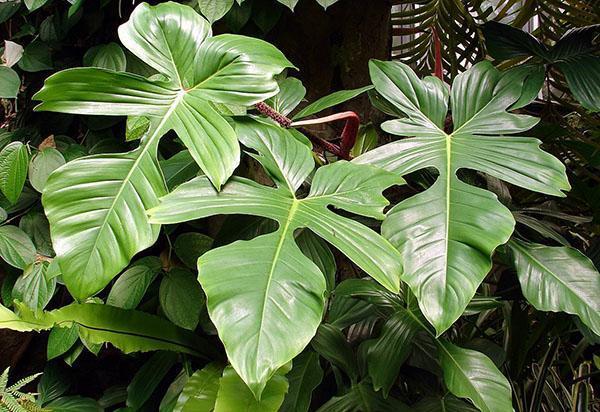 The peculiarity of this large liana with intricately dissected 5-lobed leaves is long petioles covered with a reddish pile. Obviously, thanks to this, the scaly philodendron got its name.. 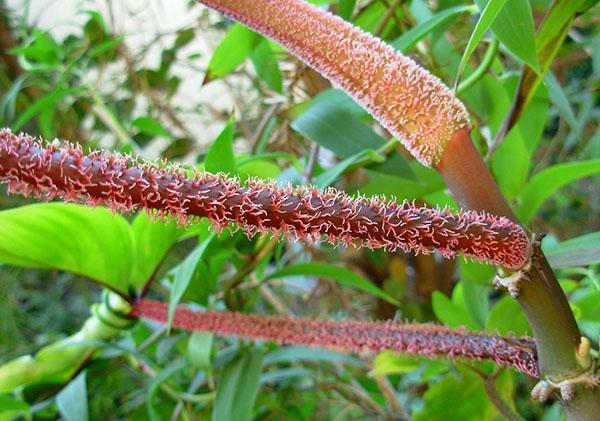 Leaves, like all philodendrons, at first, are whole, three- and then five-lobed in length, they can grow up to 30 cm.Air roots help the plant climb steep surfaces and hold on to any suitable supports. 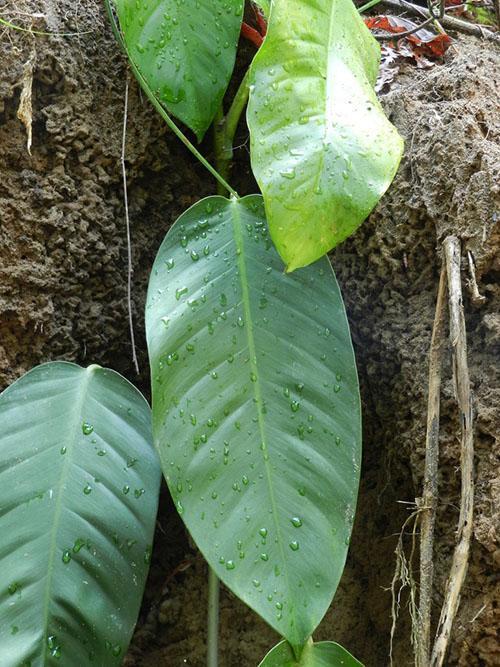 This South American species of philodendron was described and studied in the first half of the nineteenth century. Like many of it, the droplet philodendron can settle both on the ground and on the branches, and in the terrestrial form, this vine is almost twice as miniature and modest as a similar epiphyte..

Keeping on short stalks, oblong pointed leaves on the ground do not exceed 15 cm in length, and with vertical growth they grow up to 20-30 cm in length. 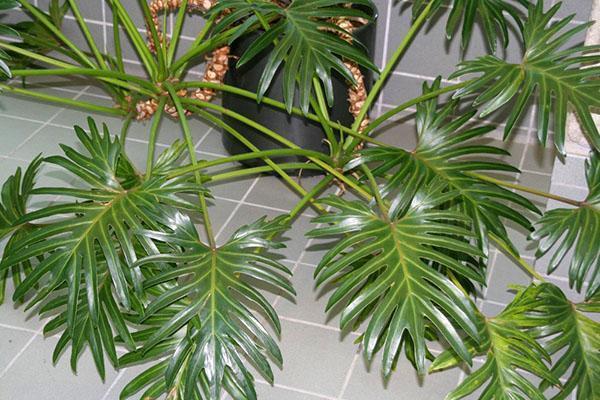 When looking at a philodendron, a graceful inexperienced florist may confuse a plant with a monster or a Sello philodendron. However, despite the general similarities, these cultures also have many differences. 40-70 centimeter leaves of graceful philodendron artfully dissected along each vein into narrow, linear lobes. 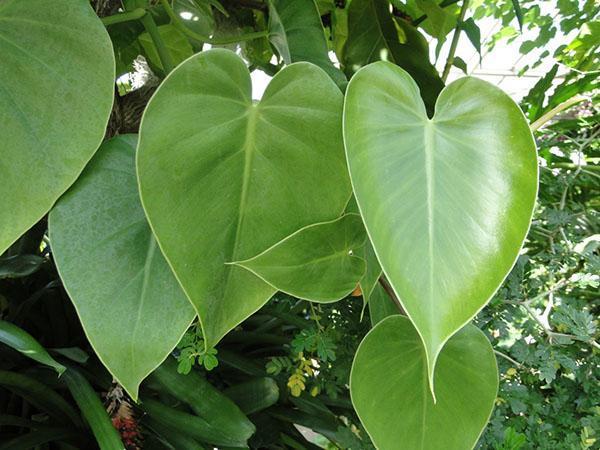 One of the smallest, smallest and most popular philodendron species among florists can be considered the most ambiguous. The ivy philodendron at different times, and sometimes even today, is called the climbing philodendron, the brilliant, clinging or pointed philodendron. No other variety can “boast” such a wide range of names. However, the plant does not hold human love either.! 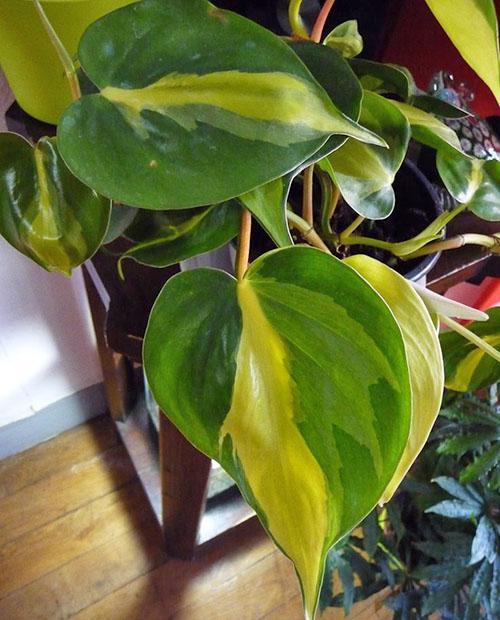 Liana with broad-heart-shaped pointed leaves sitting on long flexible petioles is a favorite indoor culture. In terms of popularity, the plant argues with a scindapsus similar to it (photo). 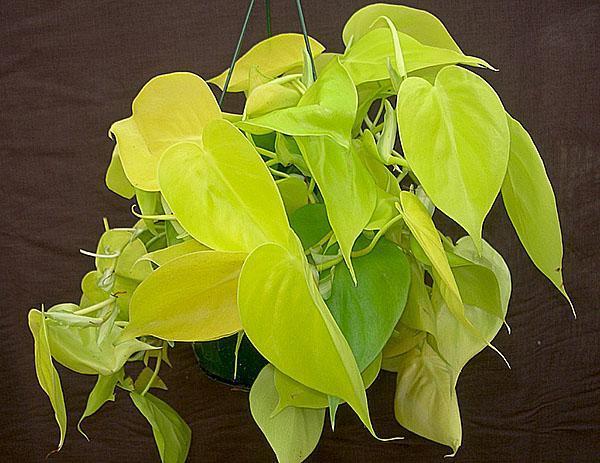 In nature, there are specimens with smooth dark green foliage that perfectly withstands deep shadow. Today, at the disposal of lovers of indoor floriculture, there are varieties not only with marble coloring with lemon and white spots. Bred a variety of brilliant philodendron with completely yellow leaves. 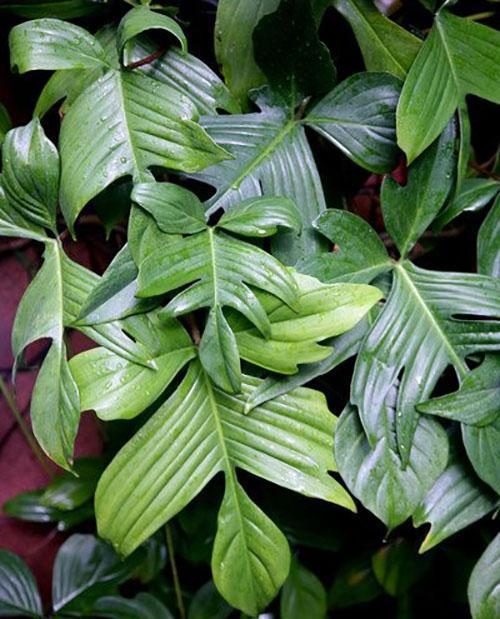 Among plants with feathery leaves, the lobular philodendron, growing as an ampelous species or climbing liana, always enjoys increased attention. A bright decoration of the plant – fancy leaves up to 40 cm long cut into uneven lobes.