Photos and descriptions of species of guzmania On the islands of the Caribbean Sea, in the countries of South and Central America, thanks to the many years of work of botanists, thousands of species of wild plants have been discovered and described. Guzmania, whose photo amazes with the richness of greenery and catchy sultans over the rosettes, is an indigenous inhabitant of the tropical region. In the wild, there are about 130 varieties of herbaceous culture, differing from each other in size, shape and color of bracts surrounding tiny, inconspicuous flowers.

A change in the color of foliage in the center of the rosette or a peduncle rising above the green is a sure sign of an approaching flowering – the culmination and end of the life of a guzmania. After the flowers wither, the plant itself dies, but this does not stop the flower growers, conquered by the beauty of the tropical guest. Some species of guzmania have become popular indoor plants and are successfully grown in a pot culture..

Wild varieties adorn the southern open spaces with all shades of red, orange, and less often yellow. And in artificially bred varieties and hybrids, the gamut is much wider. Fans of indoor floriculture admire how sultans unfold over the rosettes not only in red, but also in purple and lilac tones. There are even plants with white and bicolor bracts.. 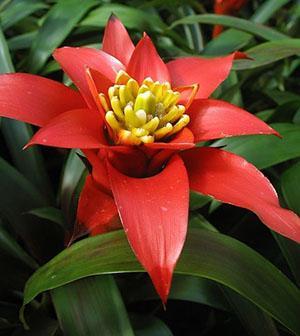 In the house, you can most often find reed Guzmania. The natural species is a pronounced epiphyte with small, rather weak roots and a stemless rosette. In addition to plants with green elongated leaves, variegated specimens are found in the wild and in cultivated plantings..

Like many bromeliads, the reed guzmania actively uses the outlet to obtain water and food. When the plant is about to bloom at 2 years of age, the wider and shorter leaves acquire a bright color, and nondescript flowers form and open from their axils. The fully opened bracts of this species of guzmania are red in color, and the flowers themselves are yellow.

The decorativeness of the plant lasts up to 15-18 weeks, then the entire central part of the guzmania withers, and the life of the plant continues due to the development of basal daughter rosettes.

Today, several varietal groups have been created that unite plants: 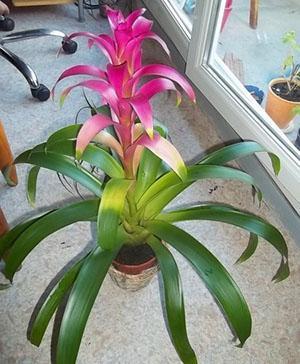 Among the popular varieties offered by growers of indoor plants are the Tempo guzmania and the Rondo guzmania. Under such names are hidden large variety groups obtained on the basis of the reed Guzmania.

If you want to replenish your collection of indoor plants with a miniature rosette with a red-orange sultan at the top, a florist should pay attention to Guzmania minor or Guzmania lingulata var. Minor. It is a hardy hybrid that blooms from February to mid-summer and is very convenient for growing on narrow city windowsills. Miniature plants included in the Rondo cultivar group will be offered in a specialized store under the name “Guzmania minor Rondo”. 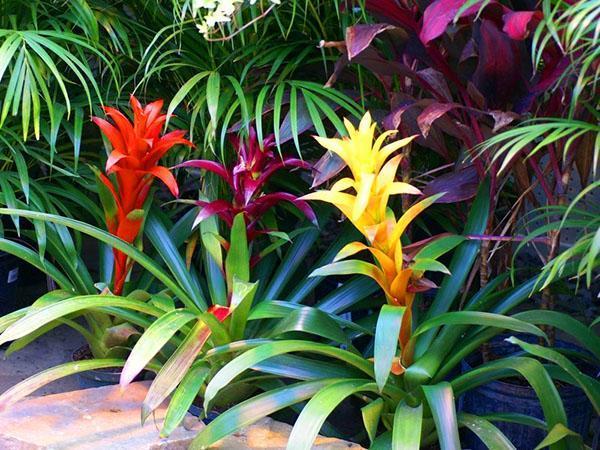 Guzmania reed var. lingulata is larger than Guzmania minor shown in the photo. But the main feature of this plant is not the size, but the beautiful pink shade of the bracts, rising high above the greenery.. 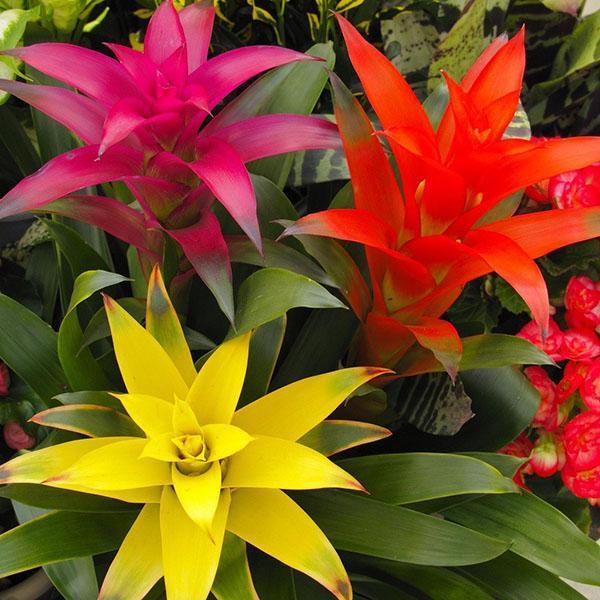 If, on the counter of the flower shop, there are even rows of tropical plants that differ only in the flowers of the sultans, the buyer had a great opportunity to choose the best of the Mix Guzmania specimens. Under this commercial name, hybrids of Guzmania lingulata with yellow, burgundy, scarlet or pink bracts go on sale..

Since the guzmania mix, in the photo, was bred specifically for amateur floriculture, such plants are perfectly acclimatized to being kept at home. They are unpretentious and very attractive.. 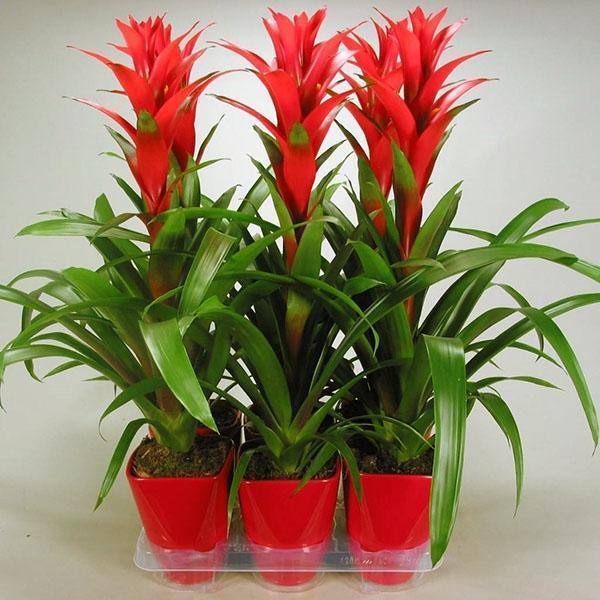 Guzmania is a malleable material in the hands of experienced breeders. Thanks to the crossing of the reed Guzmania and the species Guzmania witmackii, flower growers were able to admire the deep red fountains above the rosettes of glossy green leaves. This spectacular plant received its own name, the Ostara Guzmania. The decorativeness of the culture persists for six months, but the culture can be resumed by planting small rosettes appearing at the base of the parent specimen. 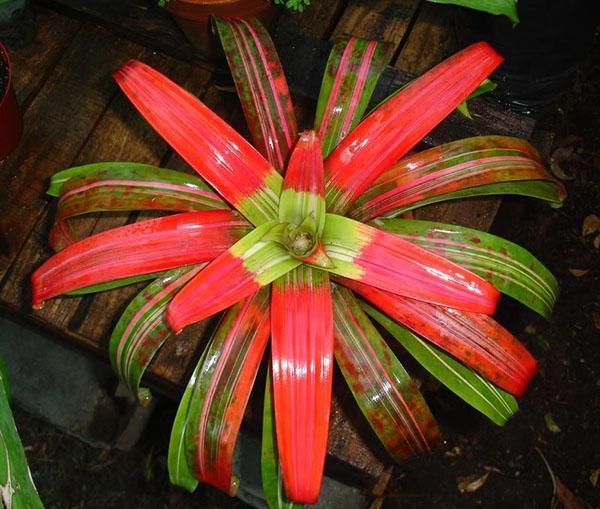 The guzmania depicted in the photo stands out among related plants in that the change in shade during flowering affects not only the short bracts, but almost the entire rosette. It becomes scarlet, purple or deep pink, and this applies to both green and variegated specimens of red guzmania.

The white-yellow flowers of the plant can be seen in the very center of the rosette. They literally float as the central funnel is often almost completely filled with moisture. In such an unusual form, the guzmania stays from April to August, and then dies. 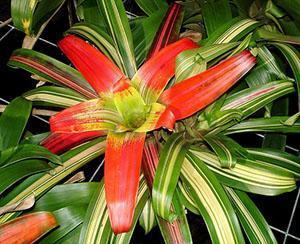 The guzmania of the tricolor variety shown in the photo is a bright ornamental plant. The culture got its name due to the contrasting combination of red, white and green colors on dense juicy foliage. Yellow flowers are hidden in the core and are practically invisible.

Mosaic guzmania differs from the already described species in denser foliage, on which transverse stripes of different intensities are clearly visible. 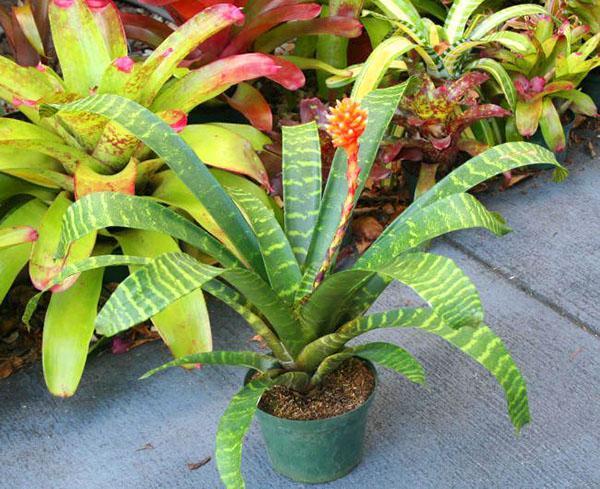 The inflorescence appears on a tall, single peduncle that rises above a rosette up to 1 meter in diameter. This type of guzmania is less dependent on precipitation, takes root well in the soil and receives nutrition from the soil.. 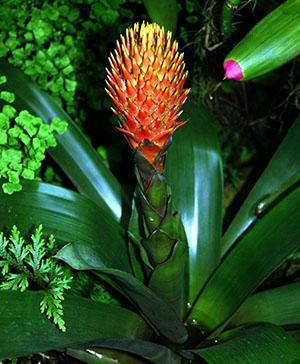 Having seen only once a flowering, as in the photo, of a conifer guzmania, it is impossible to forget this plant. Thanks to the cone-shaped red-orange cone at the top of a dense, erect or inclined peduncle, the plant can be seen from afar even in the tropics of Peru and Ecuador, where this spectacular species occurs in nature. The shape of the inflorescence gave the plant a specific name and determined its continuing popularity among flower growers..

If you are going to replenish the collection with conifer guzmania, a fan of indoor crops should know that this is one of the largest varieties grown at home.. 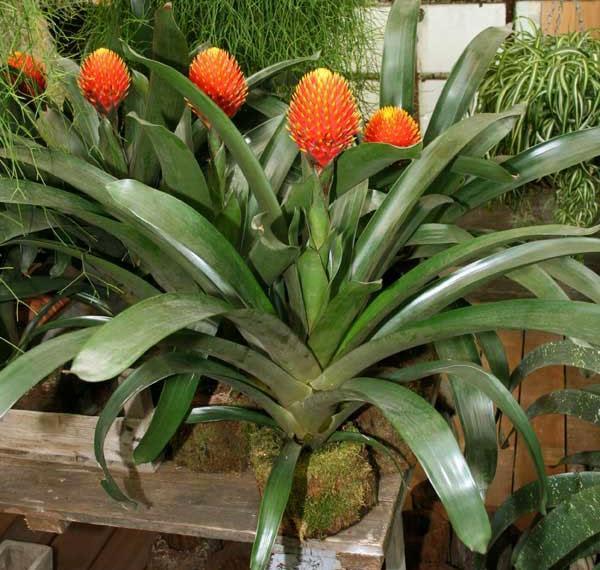 The flowers are orange-red, relatively large for plants of this genus. Wild specimens are large epiphytes that inhabit the branches and trunks of trees. This behavior is due to the need to receive sunlight and power. Moreover, this type of guzmania is not a parasite. He gets everything he needs from precipitation, small accumulations of soil on the branches and atmospheric air.. 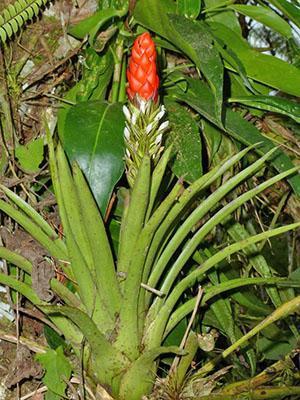 One of the most beautifully flowering species of guzman is called one-spike because of the external features of the inflorescence of this large epiphytic plant. The peduncle, covered with short bracts, is green at the bottom, but turns red or orange at the top. White flowers are clearly visible from under the wedge-shaped bracts. A dense leaf rosette is formed of elongated green leaves, the color of which in the lower rows is much paler than in the center.

As the guzmania blooms and pollinates, as in the photo, under green or variegated bracts, small crested fruit-boxes are formed. 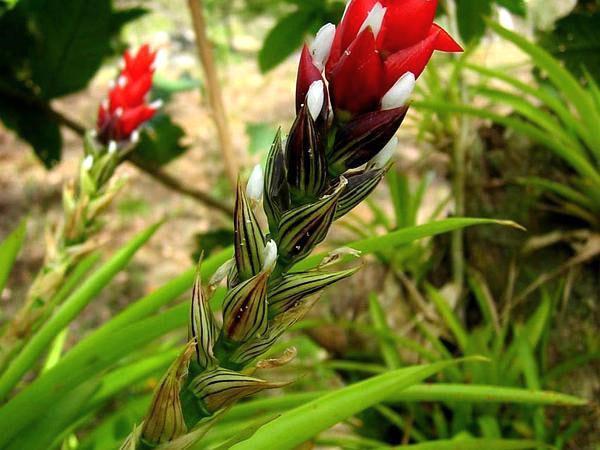 The single-spiked guzmania alba is a surprisingly graceful plant with green, monochromatic foliage and high inflorescences that change color from green to almost white from the base to the top. Small flowers under short bracts are also white. 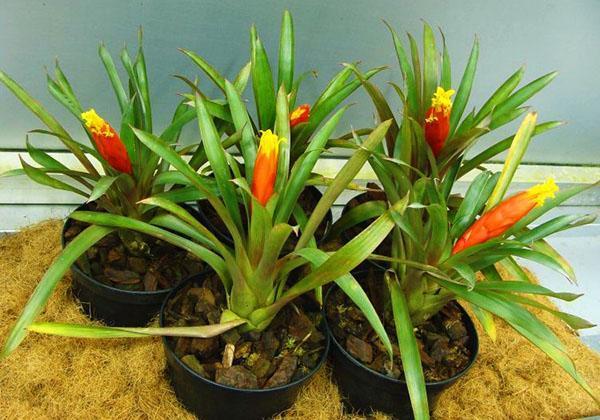 A medium-sized species of guzmania is ideal for keeping indoors. The plant has a compact rosette of smooth light green leaves and an erect spike-shaped inflorescence of bright scarlet color. On the back, the base of the foliage has a brown or purple hue. Lemon yellow flowers sit on short petioles and are clearly visible above the bracts. Flowering is relatively short and occurs in the spring months..

Video – all about guzmania