Species and varieties of saxifraga 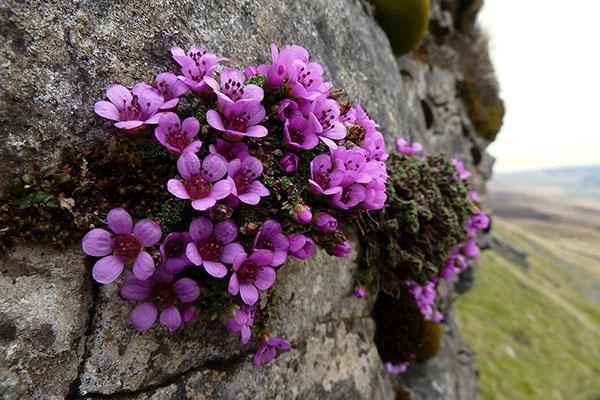 Saxifrage is a fairly common perennial herb that many landscape designers have come to love. The types and varieties of saxifrage are diverse. There are about 450 of them. The name of the plant speaks for itself. Saxifrage in nature is more common in the northern part of the globe and can grow even in extreme conditions: between stones, in crevices of rocks.

The saxifraga is a genus of perennial grasses that belong to the family of saxifraga. Among them, occasionally there are annual, biennial plants..

Most varieties are shade-loving, preferring to grow in moderately moist soil.

Saxifrage in nature is common in the northern regions. Most species are ground cover and vegetative parts of plants form a continuous carpet of leaves.

The appearance of plants depends on the species. The leaves can be dark green, gray. Rounded or elongated. Many varieties of saxifrage bloom for a long time. Flowers can be white, yellow, scarlet, pink.

Types and varieties of saxifrage

Saxifrage is used to decorate garden and park areas. Most often it is chosen for the decoration of alpine slides, rock gardens or planted on rocky soils on the site. There are also varieties for indoor cultivation. Consider the most popular varieties of saxifrage. 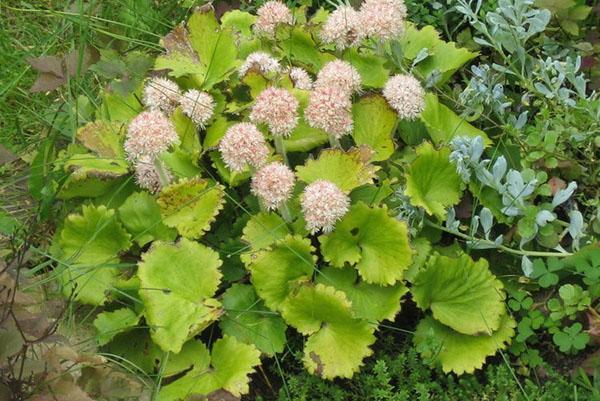 The Manchurian saxifrage is a small plant with rounded leaves that retain their decorative effect throughout the entire growth period. It is distinguished by a large number of roots located almost on the surface of the soil. The flowering period begins in the second half of summer and lasts up to 45 days. The flowers are small, white-pink. Seeds ripen in autumn.

Manchurian saxifrage prefers to grow on moist, loose soil. The species is frost-resistant, shade-tolerant, resistant to diseases and phyto-pests. 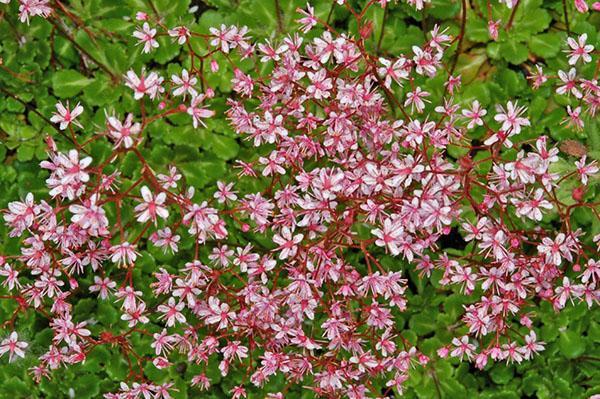 The height of the shadow saxifrage is about 8 cm. There is a small fluff on the surface of the leaves. The plant forms small light pink flowers up to 15 cm high.During the growing season, it resembles a continuous carpet of leaves and towering peduncles.

Saxifrage shade grows well in soils with sufficient water. Even a short-term drought can affect the decorativeness of the plant..

Round-leaved saxifrage is a plant up to 30-40 cm high. A distinctive feature of the species is its long flowering period – from late spring and throughout the summer. The flowers are white with red spots. Leaves are dark green, with jagged edges. The species can grow well both in the shade and in sunny places. Used for landscaping rocky areas. In plantings it goes well with hosts, pelargonium, badans.

Positive aspects of the view: 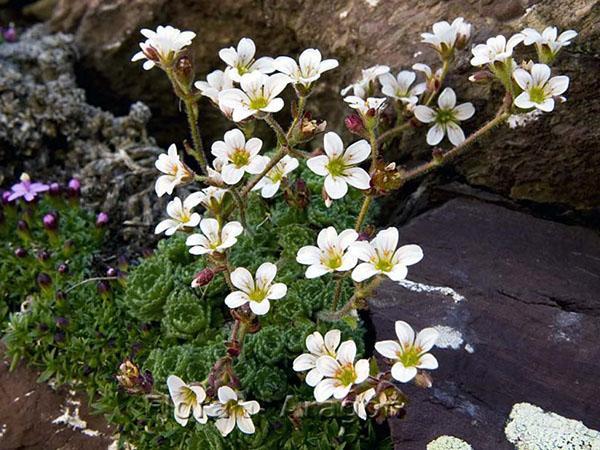 Saxifrage paniculata forms peduncles up to 10 cm high. Blossoms in June with white-yellow flowers. The leaves are elongated, gray-green in color, with serrations and calcareous protrusions along the edges. Foliage height 4-8 cm.

To grow the species, you must choose a well-drained soil with a lot of calcium..

Advantages of the variety: 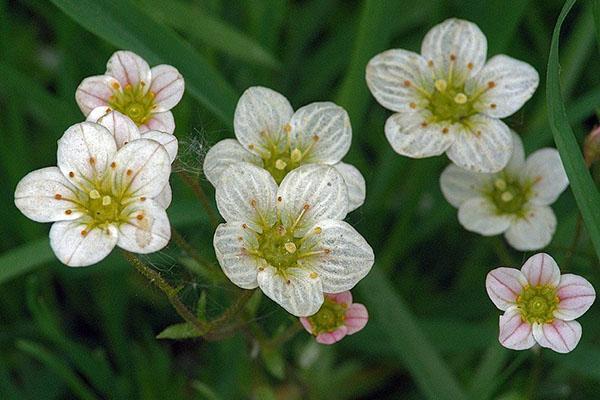 Sod saxifrage is rarely cultivated. Most often, this species can be found in its natural environment – in North America. The height of the plant during flowering does not exceed 20 cm. The flowers are white, red, pink. Opens in May-July. Duration of flowering – up to 1 month.

The appearance of saxifrage can vary depending on the place of growth. For planting, it is recommended to choose a shady area with light soil.. 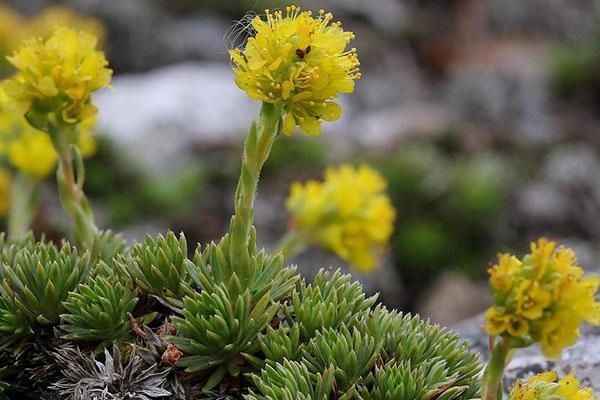 The name of the plant fully reflects the appearance of this species. Its leaves resemble juniper needles. Saxifrage juniper-leaved on the surface of the earth looks like a thorny dark green hummock. Blooms in May – June. In this case, the peduncles reach a height of up to 15 cm.The flowers are yellow, spike-like.

For planting, you must choose a loose, slightly alkaline soil. The species retains an unusual decorative appearance during the season.. 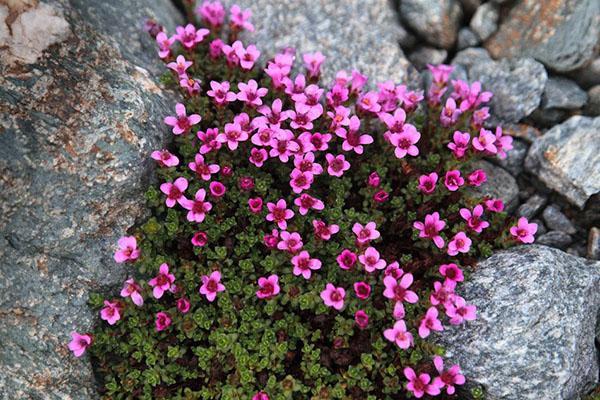 The opposite-leaved saxifrage differs from other species in relatively large – up to 2 cm, purple, pink flowers. The buds appear in early spring. The leaves are small, unattractive. In nature, it grows in the tundra, forest-tundra, in the mountains. Red Data Book view of the Murmansk region.

Opposite-leaved saxifrage is not suitable for planting in regions with hot climates. 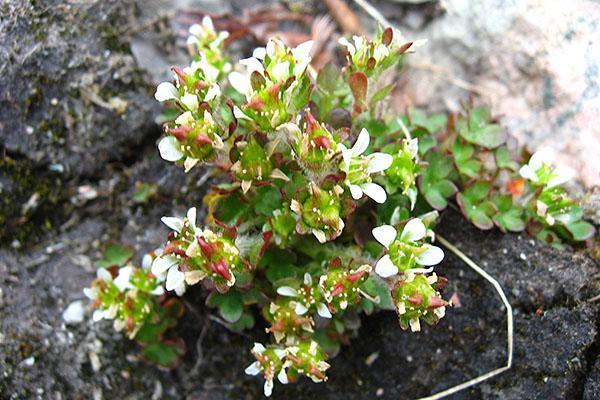 The polar saxifrage is one of the few plants to show charming flowers during the short northern summer. The flowers are red. The leaves are fleshy. During the growing season, the plant forms a continuous cover of leaves and flowers.. 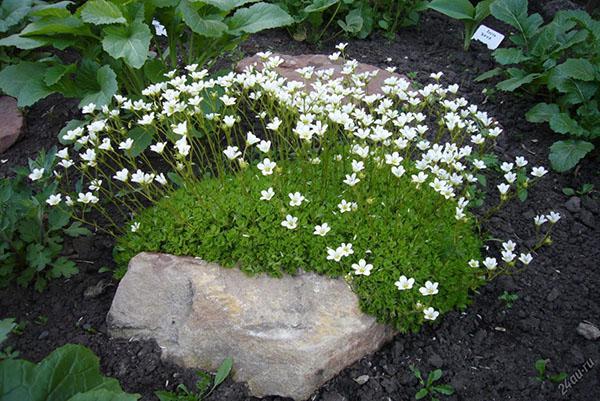 A hybrid variety that is widespread in the gardens of Russia. The leaves of the plant are elongated. The height of the rosettes depends on the variety – 10-20 cm.

The flowers are large – up to 1 cm in diameter, reminiscent of bells. Painted in white, pink, scarlet, yellow. The saxifrage of rents, depending on the place of growth, can bloom from mid-spring to the end of summer for 1 month.

The most common varieties of Arens saxifrage: 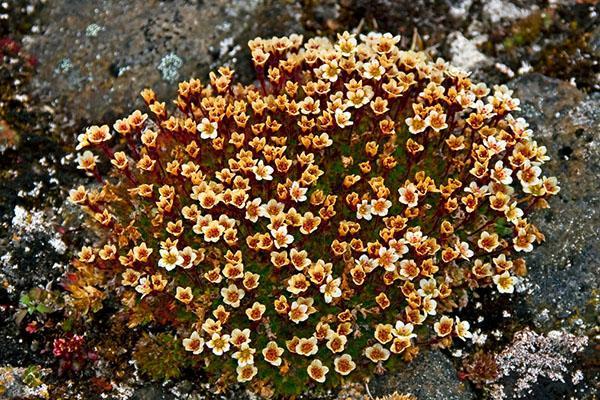 One of the few flowering medicinal plants of the tundra. Crested saxifrage is known for its high content of minerals and vitamins..

The leaves of the plant are elongated, small. The height of one saxifrage is from 3 to 15 cm.The flowers are white or white-yellow. 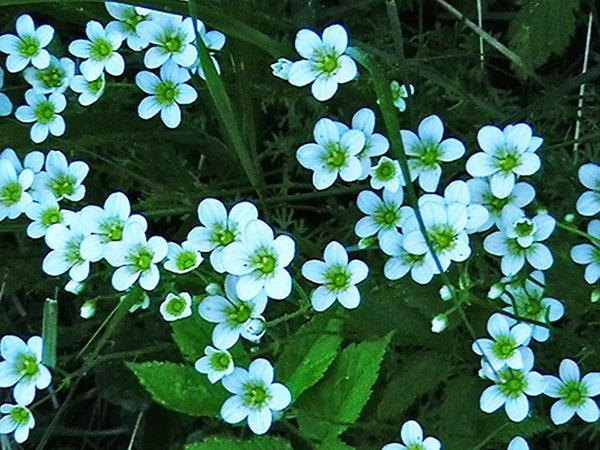 Biennial native to Eurasia and North America. The stems of the plant can be from 5 to 25 cm. The leaves are relatively large. Serrated edges.

The species has a long flowering period. The first snow-white flowers can be seen in early summer, the last in August-September.

In some countries, the species is considered rare and is under state protection. 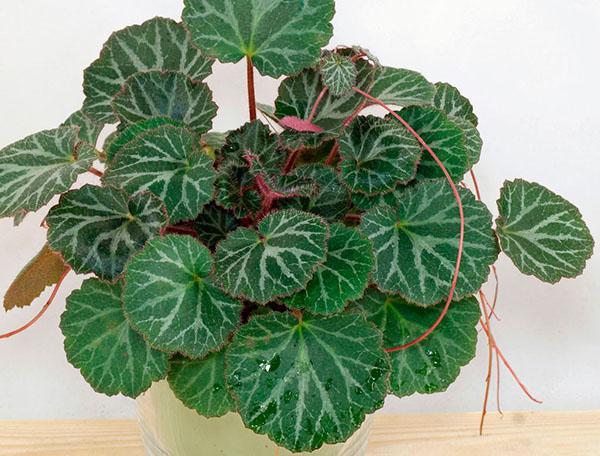 This species is often planted as a houseplant. Found naturally in China, Japan. Prefers to grow in shaded areas. The plant got its name for its long shoots, which can reach up to 1 m in length..

The height of the saxifrage is escaping 10-15 cm. The leaves are large – up to 7 cm, rounded, densely pubescent. There are jagged edges on the edges. White veins may be visible depending on the variety. Flowers are small. Painted pink. Flowering occurs in late spring – early autumn.

Florists often plant it for colorful foliage, rather than for the sake of flowers, since they are not particularly decorative..

There are 2 more plant names:

Several varieties have been bred from this type of saxifrage: Tricolor, Harvest Moon and others.. 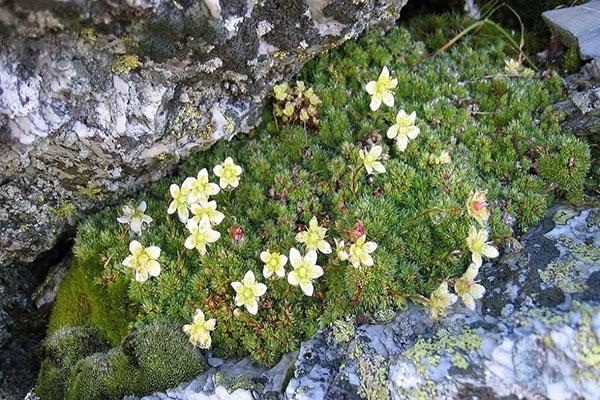 A small plant up to 10 cm high. It has medicinal properties. The leaves are small, dark green, elongated. The surface of the leaves is rough. Peduncles are short – up to 6 cm.The flowers are white, yellow with red spots.

Several varieties were obtained from the mossy saxifrage: Red Admiral, Elf, Fairy, Sprite and others..

There are many varieties of saxifrage in nature. The abundance of species and varieties, the cold resistance of plants allows them to grow in difficult natural conditions. Thanks to such unpretentious views, gardeners have the opportunity to decorate even stony, shady areas in the garden with colorful greenery..