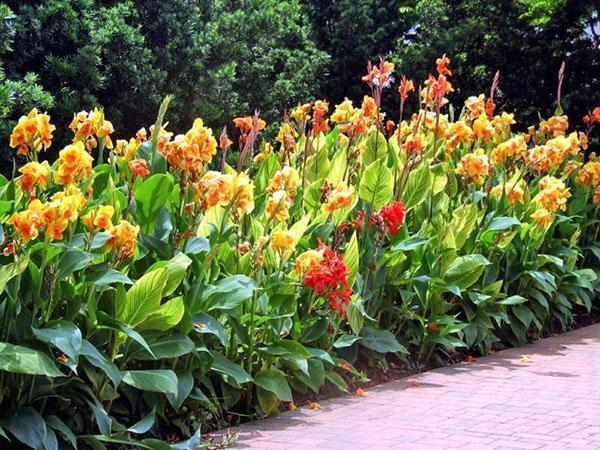 If you are tired of running around the flower beds with a watering can and fighting flower pests, plant cannes. Cannes species and varieties are varied, which will allow each grower to choose a plant to his taste. And thanks to the unpretentiousness of the cannes, they will settle in your garden for a long time. The advantage of culture is not only gorgeous foliage and luxurious flowering. Since the inflorescences have absolutely no aroma, they are not interesting for insects. The bushes themselves are able to easily tolerate irregular watering. If you are interested in these flowers, we suggest that you familiarize yourself in more detail what types and varieties of cannes are in order to choose your flower.

Amazing flowers have several main types and many wonderful varieties..

The main types of cannes

Among the variety of cannes, three types of plants are distinguished, which are easy to distinguish by their characteristic features:

The Indian canna is also a fairly large group. Photos of some of its representatives can be seen later in the article. A feature of this type of culture is the ability to reproduce not only vegetatively, but also with the help of seeds. In addition, almost all Indian cannes are late flowering. They bloom in July or even August, but bloom until October-November (depending on the growing region). But such flowers are different in height. So, a dwarf yellow Pak grows no more than 60 cm in height, while a white-flowered Eurika stretches up to 1.5 m.

In the literature, you can often find another group of cannes, in which growers include all spotted varieties. They are called so – Cannes Spotted, which means “spotted, stained, speckled” from English. Often in stores in Cannes, they are sold under this name..

Another general classification of cannes depends on the time of flowering and the color of the leaves. By the timing of flowering, they are divided into early and late varieties..

According to the color of the leaves, cannes are also grouped into two groups:

Now let’s dwell on the Cannes varieties, which differ in flowering period, and study their representatives..

These plants will delight you with their large and not very inflorescences in June. They bloom throughout the summer, and the last buds bloom in early September.. 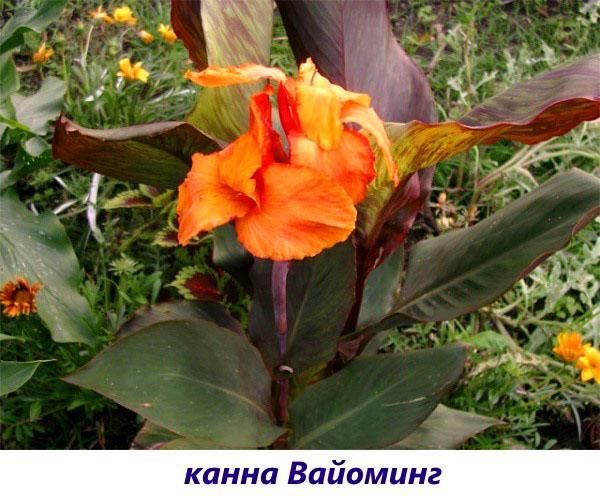 A decent size bush has a decorative appearance throughout the spring-summer season. In spring and late autumn, canna beckons with brown leaves, and from early summer to early autumn – with bright flowers. The average height of the plant is 1 m, but in the sun and in warm soil it can reach 1.5 m.The diameter of the inflorescences does not exceed 12 cm.They are painted in a rich orange color, and darker strokes are barely visible along the petals.

Canna Wyoming reproduces mainly by dividing the rhizome. In the fall, they must dig it up. Canna is stored in a cool room, where it is light. 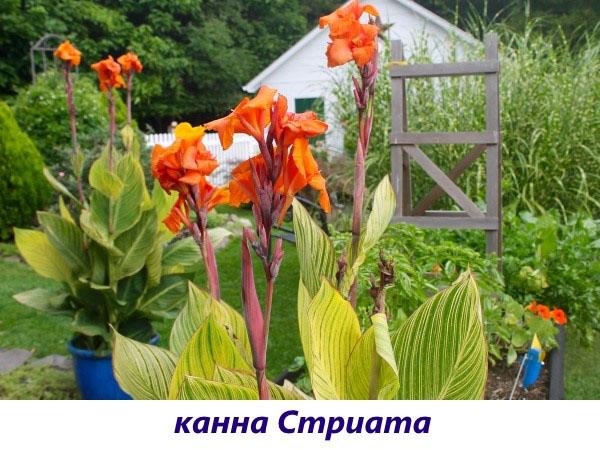 A beautiful medium early variety with elongated, slightly pointed leaves. With a leaf plate length of 50 cm, its width is only 20 cm. The bush is medium-sized, the maximum plant height does not exceed 90 cm. The buds bloom in July and bloom until September. They are pleasant, warm, orange-yellow in color, with a darker shade inside..

Variegated leaves are a characteristic feature of the variety. The green leaf plate is painted with light yellowish stripes. 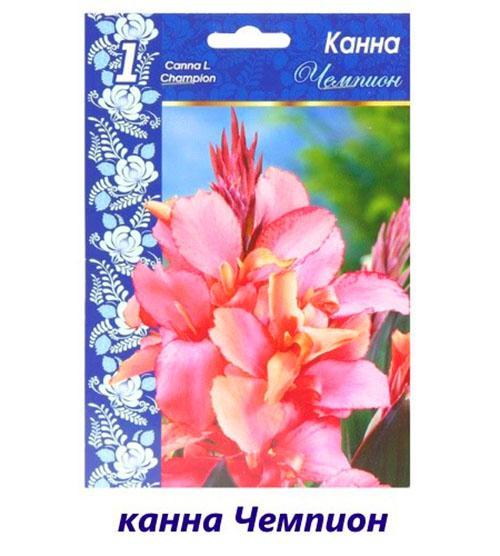 A beautiful mid-early variety with a relatively low, up to 1 m, bush and delicate inflorescences. They are colored creamy pink and bloom a little later, in July. However, flowering ends in September. From a distance it seems that it is a gladiolus blooming – the inflorescences are so similar to each other. By the way, they are quite large, up to 12 cm tall. The color of the leaves depends on the intensity of illumination and can be both green and burgundy.. 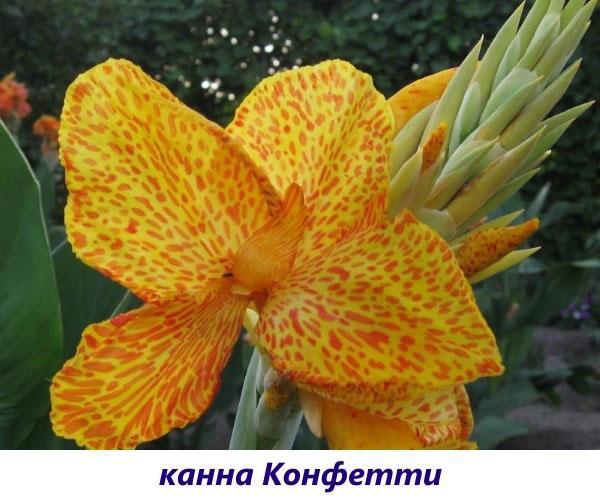 This mid-early variety begins to bloom its first buds only in July, and ends flowering in early autumn. The flowers are not very large, a maximum of 10 cm in height, but beautiful, spotted. In the photo of Canna Confetti, you can see how reddish-brown specks are densely scattered on a yellow-lemon background. The bush itself grows up to 90 cm. 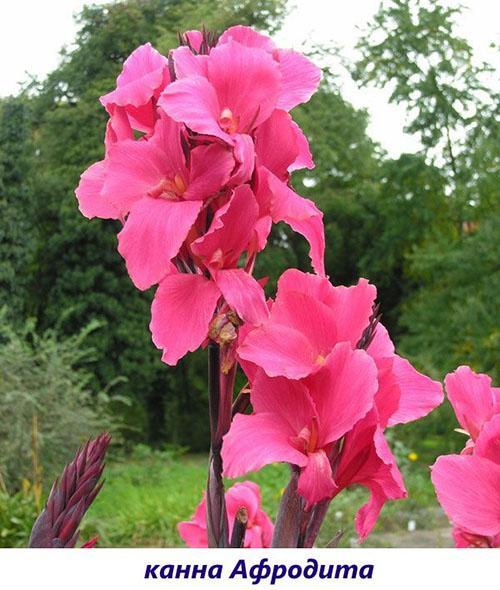 Like a goddess among other flowers, the real Aphrodite among the Cannes reveals her large inflorescences. The bush itself is not very high, only 1 m, but the diameter of the flowers can reach 18 cm.The canna Aphrodite blooms in the middle of summer and pleases with a dark pink color until the beginning of autumn. The foliage of this mid-early canna is no less beautiful. It is bronze, and by autumn the bronze remains only in veins..

The advantage of late varieties is longer flowering time. Although they open their buds only in the middle of summer, they decorate the garden until the October (and even November) frosts..

Among the late Cannes, worthy of competing with autumn dahlias, it is worth noting the following varieties: 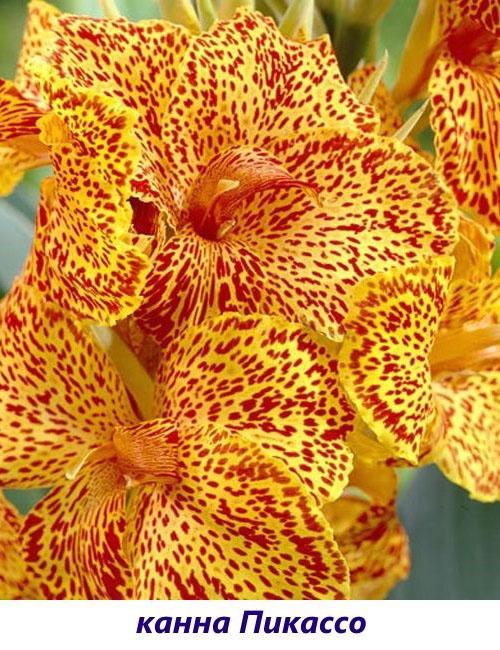 The height of the bush is rather modest, no more than 90 cm, but the main advantage of the variety is its large tiger-colored inflorescences. Their diameter reaches 13 cm. Large and dense red specks are scattered on a bright yellow background. The leaves are large, wide and green, with a lighter or darker shade. Picasso blooms only in the middle of summer. But you can admire tiger buds until October.

Due to its compact size, the variety can be grown not only in the open field, but also as a pot culture. 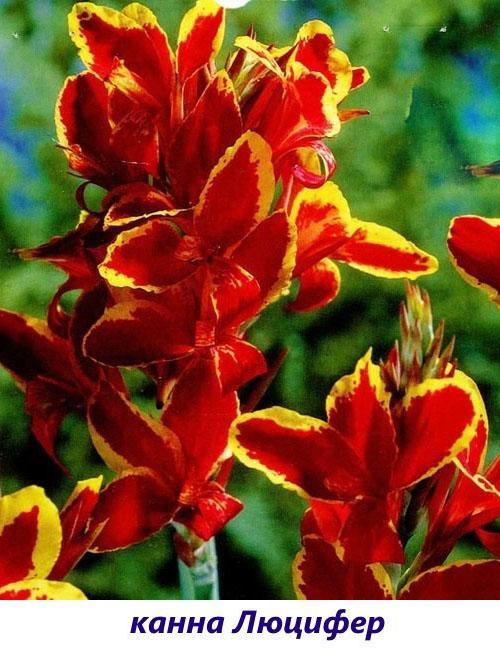 A very effective bicolor variety with a compact size. The bush grows up to a maximum of 80 cm in height. The leaf plate is green, wide, with wavy edges. In the photo of Canna Lucifer, you can see that her flowers are bright red, with a wide and uneven yellow border. The height of the inflorescence reaches 12 cm, and the canna blooms from mid-summer until frost.

If you transplant the canna from the garden to the pot and take it into the house in the fall, it will bloom almost all year round. It will also grow beautifully in a pond..

The compact plants, about 50 cm tall, are often sold under the name Kanna Dwarf Lucifer. In general, it is one and the same variety, just different “caliber”. The color is also the same, the only thing is that the width of the border can be wider or narrower. 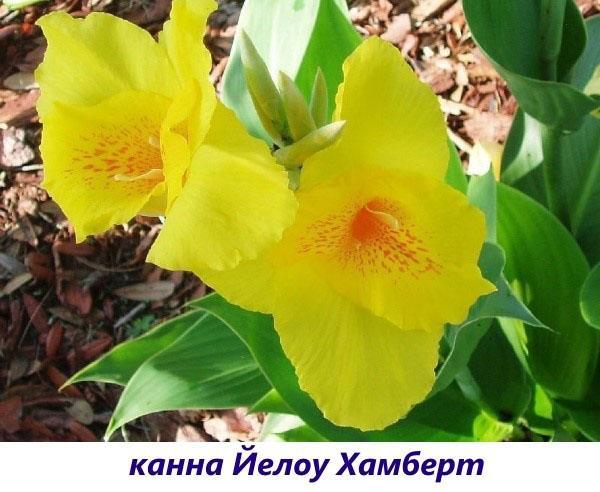 A medium-sized plant, rarely when it grows more than 120 cm. The green leaves are large and wide. Closer to the tip, they are lent, ending in a sharp top. The flowers are also medium in size, up to 10 cm high. This is a very beautiful yellow eland. Its petals are colored lemon yellow. A dense red speck is drawn in the center of the inflorescence. Sometimes it can pass partially to the petals.. 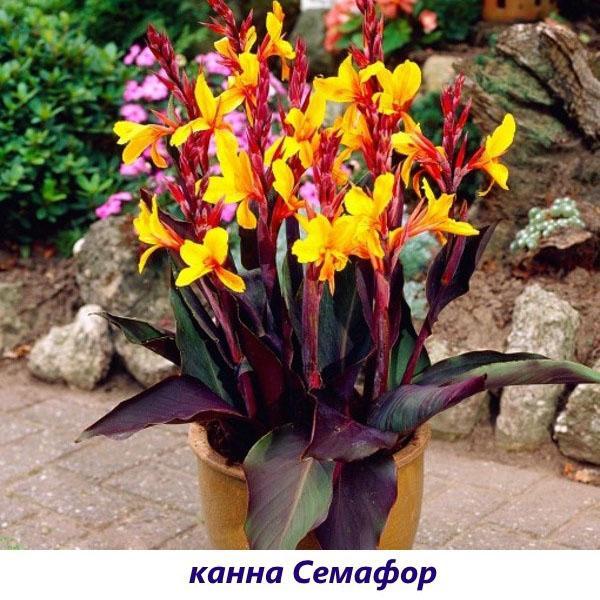 A very effective variety with a height of 90 to 180 cm. It is notable for the contrasting color of leaves and buds. Against the background of brown foliage with a purple tint, yellow traffic lights of neat small flowers burn brightly. Bloom lasts from July to September. This is one of those species that feel good both in a flower bed and in a tub, indoors..

The variety tolerates short-term drought well, but not during the growing season.. 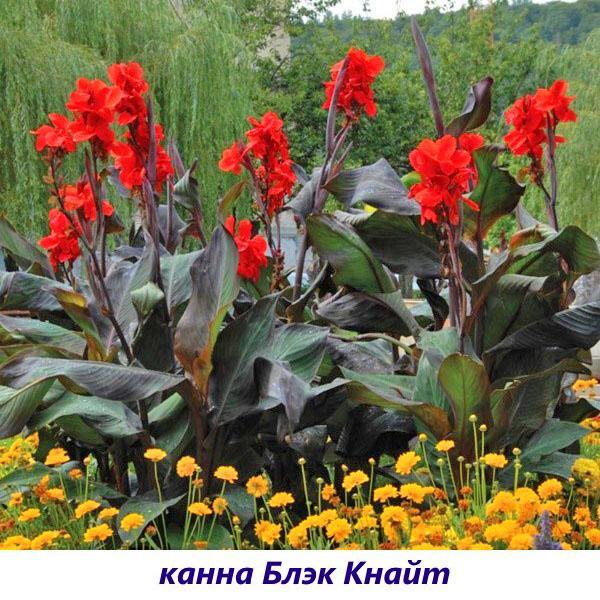 This is one of the most luxurious varieties of red cannes, which becomes the main decoration of the site and immediately catches the eye due to its color. First of all, it is beautiful, maroon foliage. The leaves are large, oval and tough, slightly tapered at the tips. The color turns brown on the stems. No less gorgeous are the scarlet inflorescences, large, more than 12 cm high. In the photo of Cannes Black Knight, it is clear that against the background of dark foliage, the buds look really noble. Flowers bloom in July and bloom until September. The bush itself is quite compact, only 1 m high.

The variety is distinguished by good resistance to adverse weather conditions that do not affect its development and flowering.. 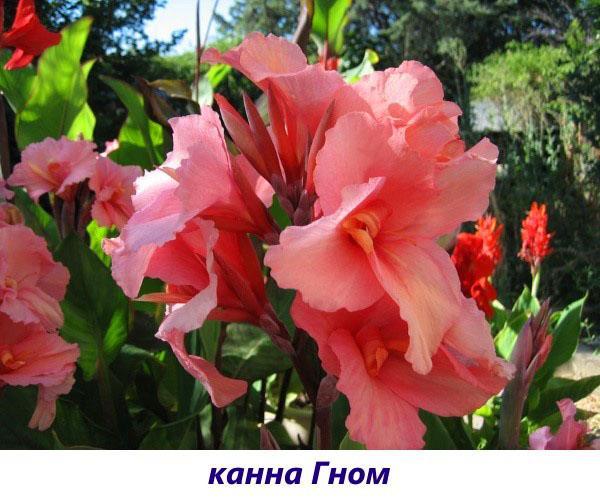 Cannu Gnome is called dwarf – the height of the plant is only 50 cm. Its delicate inflorescences are adorable: as for the canna itself, they are large enough, painted in pink. The center of the flower barely shines with a sunny yellow tint. The buds are formed on short pedicels, but the leaves of the Dwarf are large, oval in shape, with sharp tips. The color of the foliage is the usual green. Cannes bloom lasts from July to October. 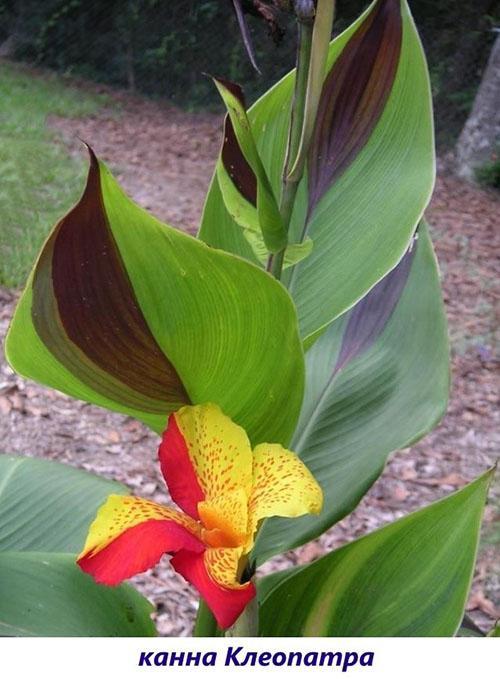 The popular variety of Indian cannes is prized by gardeners for its original multi-colored flowers and leaves. The bush grows dense, the height of the stems does not exceed 90 cm. The deciduous rosette is simply gorgeous: large, wide leaves have a striped, green-burgundy color. Photo of Canna Cleopatra confirms the decorativeness of her flowers. Blooming in early July, they bloom until early November. The color of the inflorescences is very interesting:

These are far from all varieties and types of cannes, and there are many more plants that can be grown in a garden or in tubs. Don’t put off your dream until later and don’t be afraid to buy these wonderful flowers. May they bloom and delight you for many years!

Video about the best varieties of Cannes