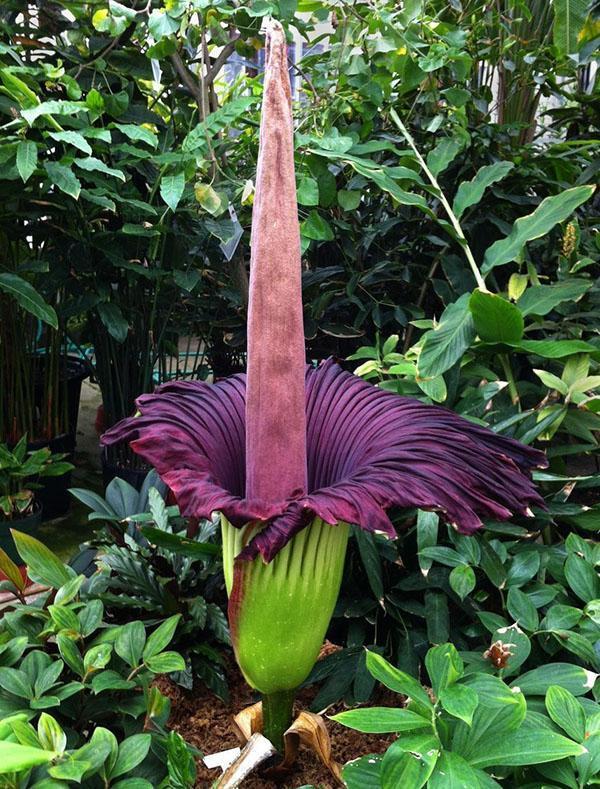 Among the representatives of the flora of the tropics and subtropics there are giant and dwarf plants, striking with an unusual type of foliage, flowers and stems. The fertile climate of the Southern Hemisphere has given the world the most famous incense and flowers of unique beauty. Amorphophallus, as a representative of the aroid family, also never ceases to amaze botanists and ordinary nature lovers..

Places of growth and features of amorphophallus

Any of the 170 species classified as amorphophallus deserves a separate story, but most of them still need careful study and description. Today it is well known that many of the members of the genus are endemic with clear boundaries. In nature, they can be found in various regions of the African, Pacific and Asian tropics. The range includes South Africa and Madagascar, Australia and nearby islands, as well as China, Japan and India, forests of Nepal and Thailand, Vietnam, large and small archipelagos of the Pacific Ocean. Indochina is considered the birthplace of these short-lived, but in their own way amazing plants..

Amorphophallus are more often seen in the undergrowth or on limestone rock outcrops among other grasses and bushes. Above the soil, they form a dense erect trunk with a strongly dissected three-fold pinnate leaf. The underground part is a massive tuber, the weight of which depends on the species.

Most of the time the plant is dormant, and flowering takes place shortly before the appearance of greenery..

See also the article: lisianthus – photo and description of the flower! 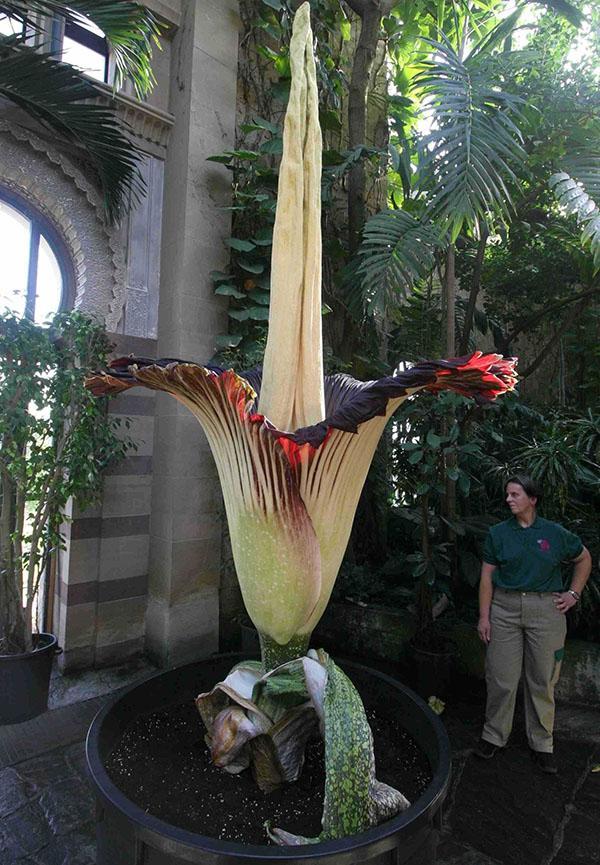 Among amorphophallus there are plants of different sizes and shapes, but the titanic amorphophallus is rightfully called the most outstanding. The view was discovered and described at the end of the 19th century by the botanist Odoardo Beccari during a trip to western Sumatra.

The sight of an unknown plant amazed the public. Never before have people been able to observe the flowering of a two-meter inflorescence in the form of a powerful cob framed by a juicy stipule. Not only were the sizes amazing, but the smell emanating from the plant had nothing to do with the scent of flowers and was unforgettable..

Today, when scientists were able to conduct a chemical analysis of the “scent”, it became clear that the natives, who called amorphophallus a cadaveric flower, were absolutely right. Among the components of the aromatic composition were:

The intensity becomes stronger as the bracts, greenish on the outside and purple on the inside, open up. The “aroma” of amorphophallus, as in the photo, serves to attract pollinating insects, so its strength changes during the day, reaching a maximum by the middle of the night. 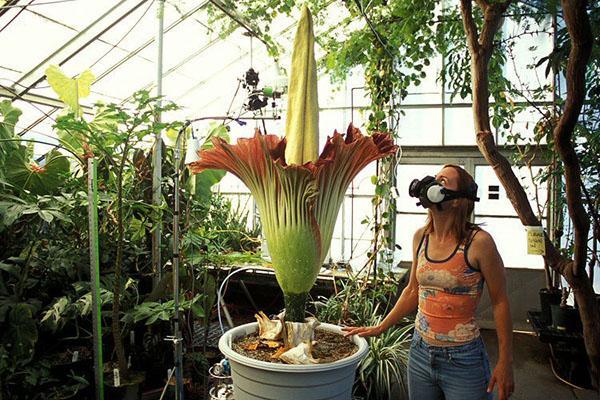 In 1894, amorphophallus titanic was recognized as a symbol of the Indonesian Botanical Garden. Individual copies went to England and other European countries for study and demonstration to the public..

But neither the giant inflorescences, nor the smell helped to save this species from almost complete extermination in the wild. Almost all of the “arum titanum” known today, as David Attenborough called the plant, are specimens from botanical gardens and greenhouses. These amorphophallus have their own names and constant monitoring of development and flowering..

Thanks to careful control, it was found that a record tuber weighing 117 kg in 2006 was obtained in Germany, and an ear of 3 meters 10 cm, which was shown in 2010 at an exhibition in the USA, was included in the Guinness Book of Records.. 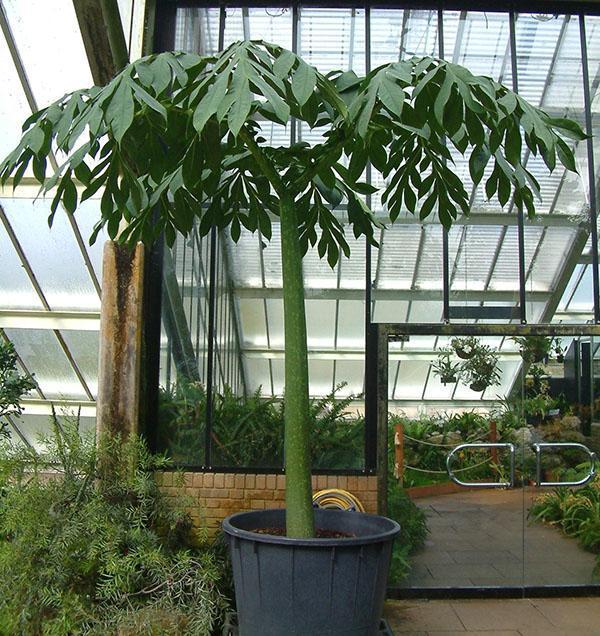 In addition to the unique cob inflorescence, which is considered the largest in the plant world, and the corms, the titanic amorphophallus has:

For the first time, a giant of the flora blooms 7-10 years after sowing. And the green part of the plant is shown above the ground only after the inflorescence wilts..

Then, at the base of the ear of amorphophallus, as in the photo, dense oval berries of orange or yellow color are formed. Flowering is extremely irregular. In some cases, inflorescences do not form for 5-8 years, but sometimes nature lovers can watch the development of one of the most unusual plants on the planet every year. 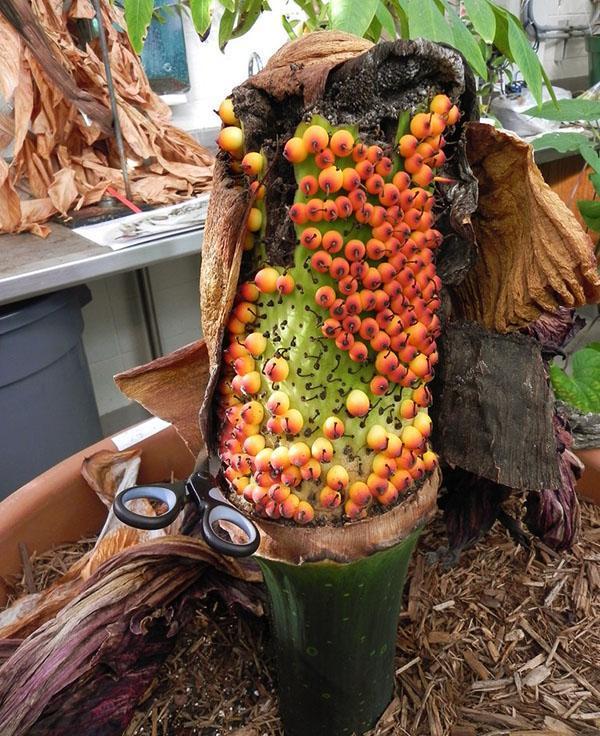 Another type of amorphophallus is a native of Southeast Asia, China and the Korean Peninsula. Amorphophallus cognac or, as the local population calls it, Koniaku is smaller than its titanic counterpart, but just as interesting for botanists and for everyone who is not indifferent to exotic flora. 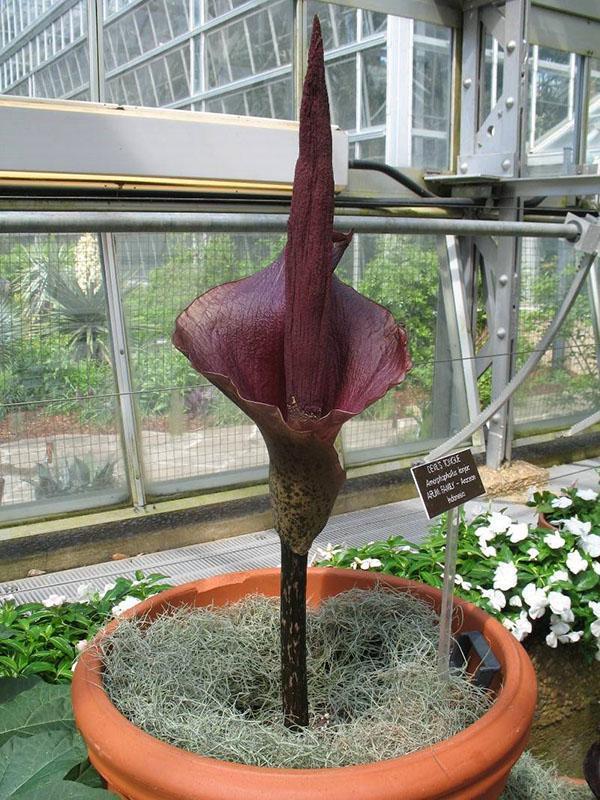 In addition to the word “konyaku”, in China, the Philippines or Vietnam in relation to this species can be heard the name “snake palm” or “devil’s tongue”. Superstitious fears among the indigenous people were caused by the shape of a large pointed inflorescence of a burgundy hue, so similar to the devil’s tongue that appeared from the underworld itself. In scientific circles, this species of perennial aroid plant also has a middle name – amorphophallus river.

The structure of the plant differs little from the titanic amorphophallus, but the height of the konniaku does not exceed two meters from the tuber to the tip of a single leaf or inflorescence.

The amorphophallus tuber, as in the photo, has an irregularly rounded appearance and can reach 30 cm in diameter.. 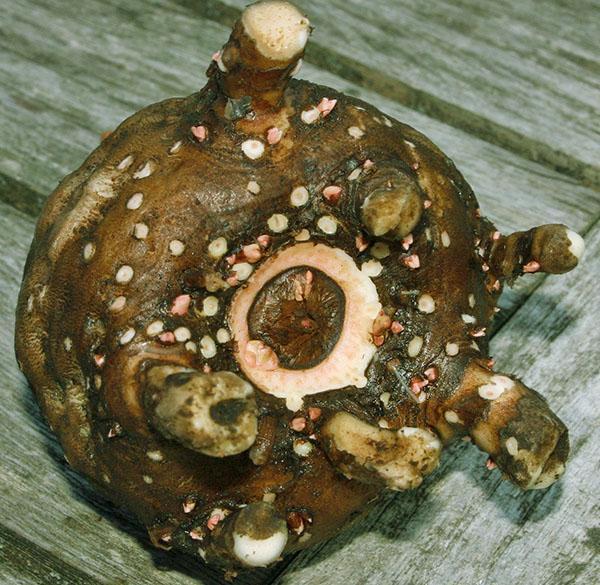 The amorphophallus river leaves the dormant period in early spring and blooms in April. The inflorescence of konniaku rests on an erect petiole, painted in the same tone as the bedspread and the cob, about a meter long. As it blooms, the smell of rotting flesh spreads around the amorphophallus, and sticky drops form on the cob. In this way, the plant attracts insects that carry pollen from male flowers to female flowers located here..

Despite the unpleasant smell inherent in the species, an exotic species of culture is grown as decorative not only in greenhouses, but also in ordinary apartments..

But at home, they value more not the original beauty of inflorescences and dull green snake palms, but the possibility of using the amorphophallus tuber for food. Flour and gelling food additives are made from brownish corms, which are not inferior in quality to agar-agar. 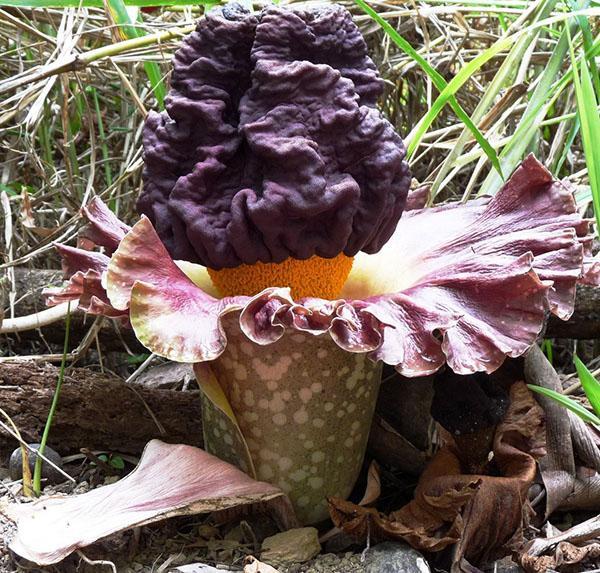 Amorphallus cognac is not the only ornamental and food plant in the genus. In some provinces of China, in Vietnam and on the islands of the Pacific Ocean, amorphophallus pion-leaved, called elephant yam, grows.

With the general similarity of the tuber and leaf, the inflorescence and veil are very different in appearance from Konniaku and Arum Titanum. A purple or violet-greenish bedspread has a pronounced frill along the edge, and the upper part of the cob holding on a shortened petiole resembles the fruiting body of a strongly overgrown line.

The tuber of an adult amorphophallus pion-leaved can weigh up to 15 kg and reach 40 cm in diameter. At home, this species is cultivated as a food, medicinal and forage plant. They use flour obtained from tubers and the corms themselves, which are fried and boiled like potatoes.. 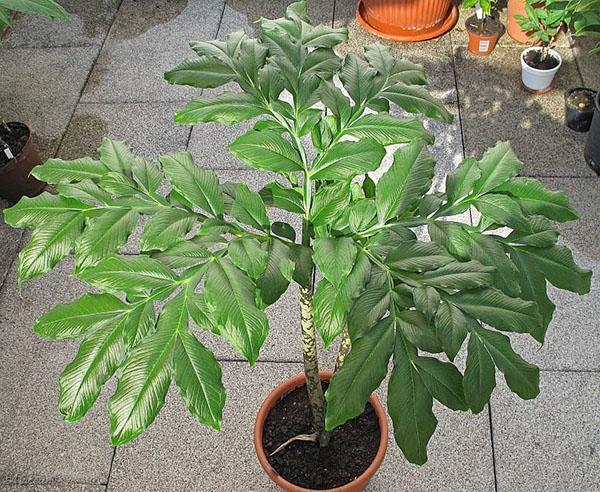 Like the lower part of the bedspread, the leaf petiole has a mottled color. The leaves of this species really resemble the foliage of a famous garden flower, but unlike it, they can grow from 50 to 300 cm in diameter.

All amorphophallus owe their smell to the preferences of the insects that pollinate them. Typically, these are flies and scavengers, attracted by the miasma of rotting flesh. For the same reason, in most species, the coverlet, the protecting inflorescence, has a rich burgundy or blood shade..

However, there are exceptions to all the rules. The voodoo lily or amorphophallus bulbous growing in the wild can be considered the most beautiful, even exquisite of all relatives. He has a white-yellow ear pointed upwards with a clear border of the location of female and male flowers and a pink veil on the inside. In shape and grace, as can be seen in the photo of amorphophallus, such an inflorescence is more reminiscent of calla lilies, moreover, it almost does not have such a disappointing unpleasant smell for growers.

But the main feature of the species is not this, but the ability to form quite viable bulbs on the branch of leaf veins. Falling to the ground, after a short period of dormancy, they germinate and give life to new plants along with the children formed on the corms. 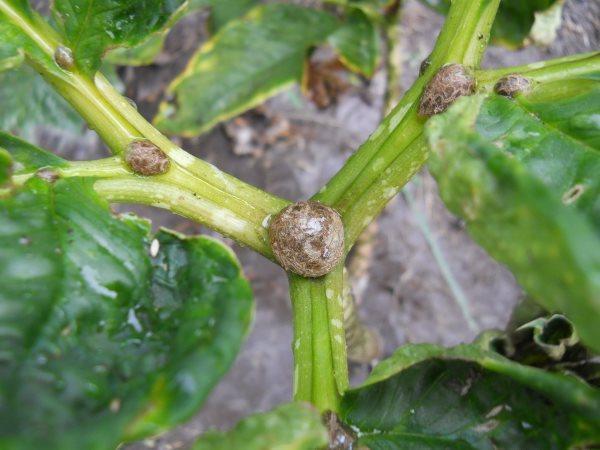 Amorphophallus bulbous in the wild is still found in the forests of India and Myanmar. But the species received real recognition in Europe and the USA, where it is considered an excellent indoor culture.. 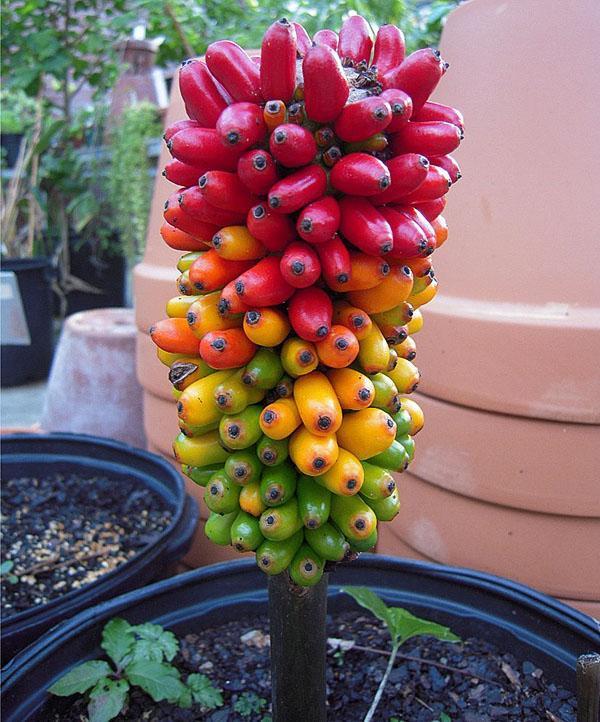 The species has a rather long dormant period, from September to February the tuber is in dry soil without watering, and in the spring after transplanting it gives an arrow, on which a large white-pink inflorescence opens.

Like other related species, after pollination on the cob, as in the photo of amorphophallus, oval berries can ripen. Depending on ripeness, their color varies from green to densely carmine. Before the berries are fully ripe, the plant manages to give a leaf on a spotted hollow stalk. 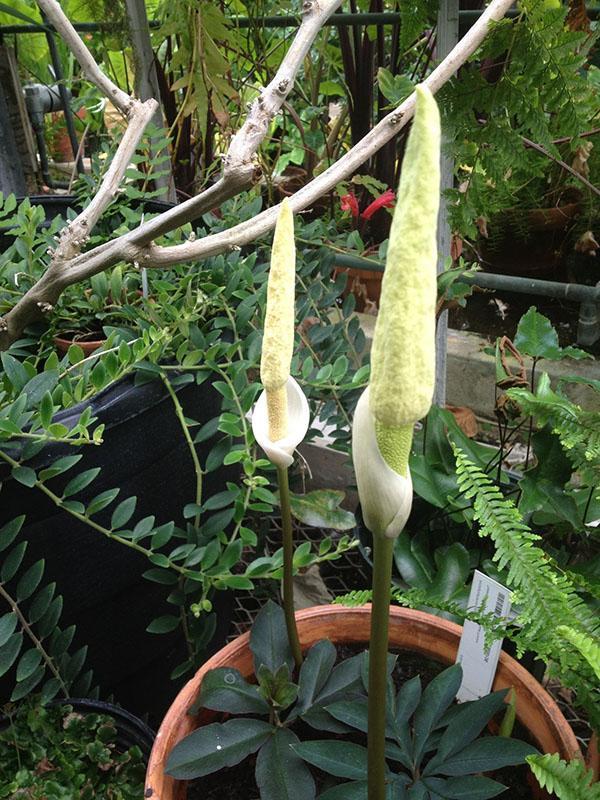 The amorphophallus dwarf or pygmy originally from Thailand is of obvious interest for lovers of indoor crops. A plant no more than half a meter high stands out from a number of relatives by completely white elongated inflorescences with a small, also white bracts.

The smell characteristic of amorphophallus, this species emits only on the first night after the appearance of the cob and from spring to autumn pleases the owners first with the kind of inflorescences, then the berries formed on the cob, and then with thick green or almost black feathery leaves..

Video about the flowering of Amorphophallus in the apartment