The symbol of male longevity is the guzmania flower 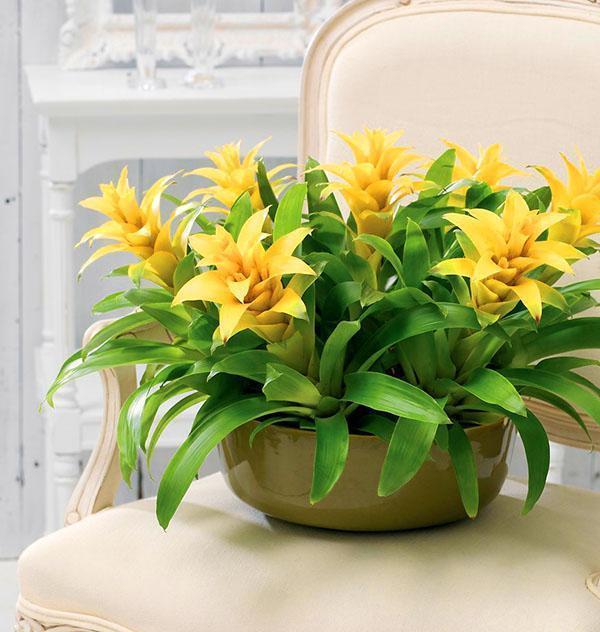 Under the canopy of a rainforest in Central and South America, you can see rosettes of luscious green foliage, above which bright red, yellow and orange sultans rise – this is a guzmania. Plants, named after A. Guzman, a famous traveler and naturalist from Spain, settle on fertile soil under the crowns of plants, lead the lifestyle of epiphytes, climbing roots and branches, are found on open slopes.

Gusmanias, which are closely related to pineapples, belong to the Bromeliad family.

Plants differ among themselves in size, color of foliage and lifestyle. Moreover, among the 120-130 species of these herbaceous evergreen plants, there are many varieties chosen by flower growers for keeping and breeding in indoor conditions..

What are the features of a flower? What guzmania brings to the house, and what attracts the attention of flower growers all over the world in it?

Features and unusual abilities of the guzmania plant 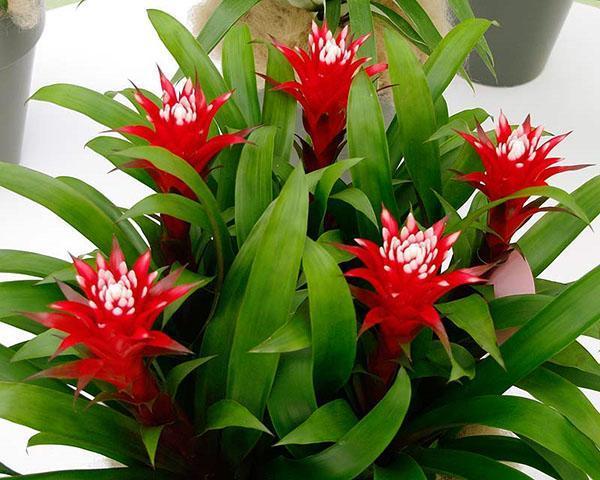 Interestingly, in Russia and a number of other countries, the plant is better known under the wrong name. The fact is that in Latin the name of the South American plant is written as Guzmania. If we take into account the pronunciation of the surname of the Spanish scientist, then the correct naming of the culture is gusmania. But among flower growers, and in many literary sources, the genus is called the indoor flower guzmania.

The answer to the question about the attractiveness of a plant is very simple. Of course, lovers of home floriculture first of all pay attention to the bright sultan formed at the top of the outlet. Many novice growers mistakenly believe that this is a guzmania flower. In fact, this is not an inflorescence, but just a modified foliage – a bright bract designed to attract the attention of pollinating insects. Such an adaptation in the plant appeared due to the fact that real flowers are extremely small and almost invisible..

Obviously, over the millennia of existence, Gusmania species have repeatedly found themselves on the verge of death, remaining without pollination. In order for the seeds to still set, individual Guzmania plants resorted to trick. Some species form cleistogamous flowers, which practically do not open, and the pollen ripens inside the bud and, independently falling on the pistil, completes the pollination process.

Unfortunately, there is only one flowering in the life of Guzmania. In most species, with wilting after pollination of the bracts, the old rosette also dies off.. 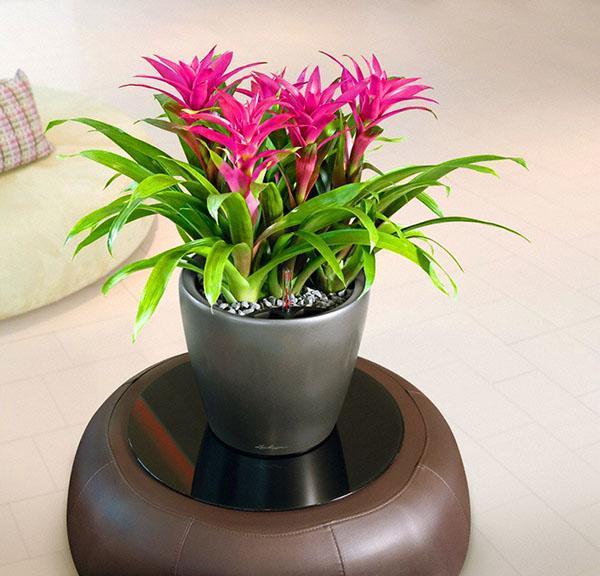 The growing popularity of indoor Guzmania flowers has led to the fact that nurseries are thinking about expanding the range of these herbaceous plants. Today, flower growers have hybrids and varieties at their disposal not only with scarlet sultans of bracts, but also with pink, burgundy, orange and yellow tops of the rosettes. Variegated hybrids also appeared, in which the green color on the foliage is combined with contrasting white or pink stripes..

Dense rosettes of leaves growing in a spiral are very decorative, but such a structure of a guzmania plant is dictated not by beauty, but solely by necessity..

Epiphytes living on the roots and trunks of trees, with the help of a funnel-shaped socket, not only collect moisture, which immediately goes directly to the roots, but also independently create feeding for themselves. Together with water, particles of organic residues enter the bases of the leaves and roots in the form of:

Since the lower leaves are much longer than the upper ones, moisture is collected from the maximum possible distance from the center of the outlet. This is another amazing adaptation of Guzmania, which allows a plant with small roots and in an almost complete absence of nutritious soil to successfully grow and bloom. Indeed, epiphytes do not need a powerful root system, but the guzmania “invented” an original application for their roots. 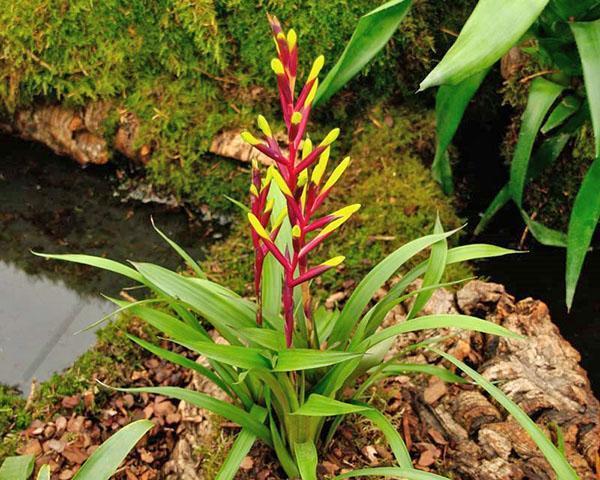 Being on a dimly lit side of a tree or finding itself in other unfavorable conditions for growth, plants can move very slowly and only a few centimeters to where it will be better. 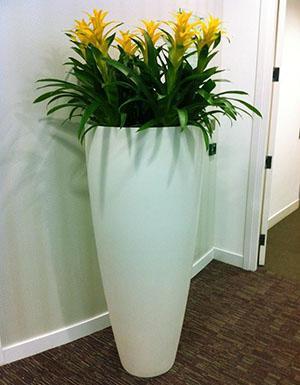 Those who have just developed a plant are interested in the guzmania itself and what this flower means. When it comes to plants in the tropics, there are often fascinating legends or omens in the literature related to the properties or history of a particular culture. Only one thing is well known: in the homeland of the plant, guzmania is recognized as a symbol of male strength and, being next to a representative of the stronger sex, invigorates and actively affects male longevity. Unfortunately, there are no more informative stories about gusmania, but bioenergetics studying the effect of plants on humans can tell a lot about this home flower..

A culture with shiny elongated leaves and a bold bracts forming at the top is an excellent decoration for the home and office, as well as an effective air purifier..

People will feel a positive effect on energy and tone everywhere, but at home this effect is most noticeable. As an indoor flower, guzmania will help get rid of excruciating depression, improve sleep and have a beneficial effect on the general condition of the body. Not only does the sight of bright living foliage have a positive effect on the emotional background and quality of sleep, it soothes and tune in to the working mood. Admiring the “bloom” of guzmania contributes to the flow of energy and awakening of creative abilities.