Photo and description of croton varieties 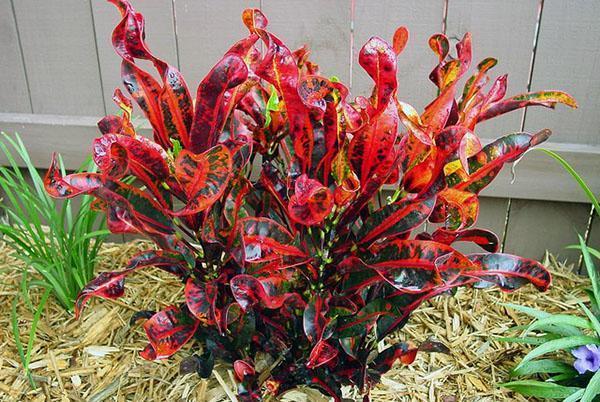 Croton is a unique culture in many ways. In the photo, Croton amazes with the splendor of colors and a variety of leaf shapes. It is difficult to believe that the foliage of plants within the same species can be elongated-lanceolate, round and pointed-elliptical, three-toed or oval. And where have you seen that leaves on living and healthy trees and shrubs curl into curls or turn into a regular spiral?

If on other ornamental crops such behavior of the foliage would be considered a manifestation of the disease or the consequences of the encroachment of pests, then for Croton, the variegated codiaum, as this species is correctly called, this is amazing, but the norm. 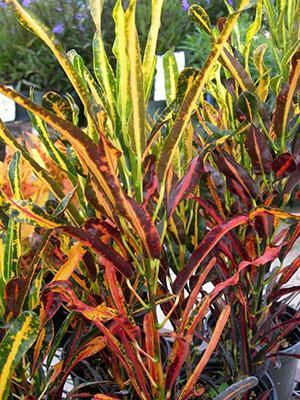 In the east of India and in a number of regions of southeast Asia, 17 species of codiaum have been discovered and described. But only Codiaeum variegatum attracted the attention of fans of ornamental crops. True, among flower growers around the world, not the correct species name has taken root, but the name “croton”, which botanists attribute to a plant of a completely different appearance and origin..

A perennial evergreen has an erect, branching stem covered with large dense foliage. Finding itself in favorable conditions, in nature or with home keeping, croton can grow up to 3-4 meters, but it is hardly possible to see such a giant grown in a pot. Most often, indoor crotons, as in the photo, are much smaller and do not exceed 50-100 cm in height.. 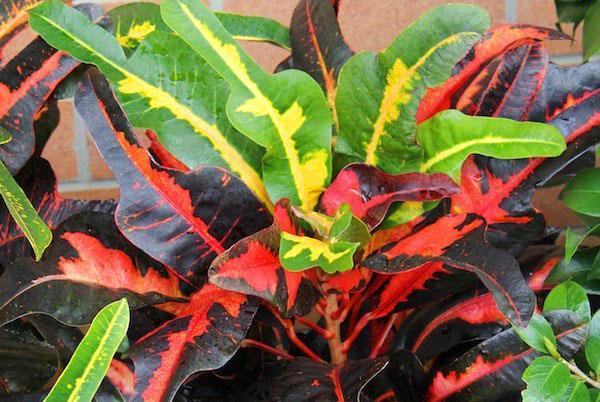 The large leathery leaves of Croton cannot be forgotten due to the variety of colors that coexist in the most unexpected way on the leaf plates and remain bright throughout the year, regardless of the season. Moreover, in most varieties, as in the presented photo of croton, contrasting veins are clearly distinguished on the leaves..

The unique gamut and variety of foliage forms is the main, attractive force that made the variegated codiaum or croton one of the most popular indoor plants all over the world.. 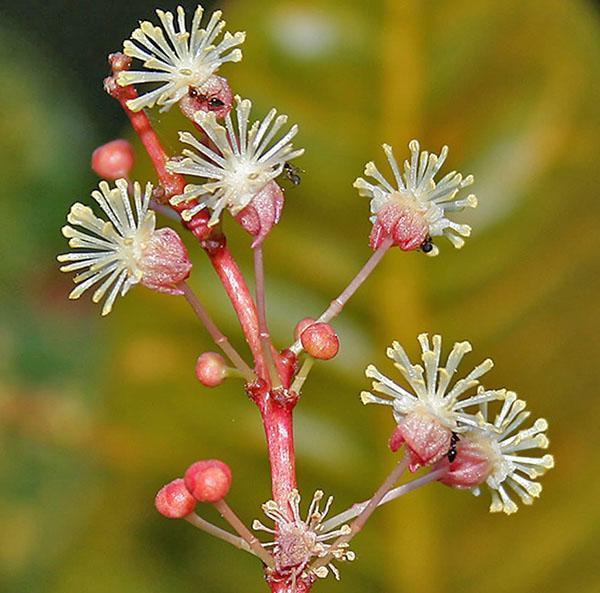 At the same time, not all growers can say that they saw how croton blooms. Although the inflorescences of this plant cannot compete with the foliage either in size, shape, or brightness of shades, they are also worthy of attention. Loose racemose inflorescences are formed in the leaf axils and combine 1.5-2 dozen small whitish flowers. Croton flowers are divided into male and female specimens, opening simultaneously, but located on different inflorescences.

The first ones are easy to recognize by the presence of small bent petals and fluffy stamens, thanks to which they look like small pompons.. 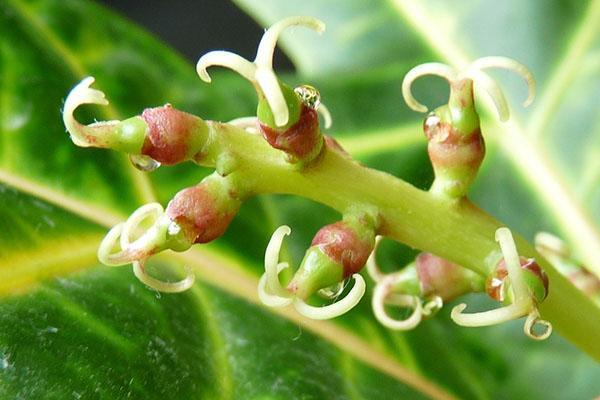 But the female croton flowers, as in the photo, are subtle and unattractive, like Cinderella, who lost her shoe and the royal castle sparkling with lights. 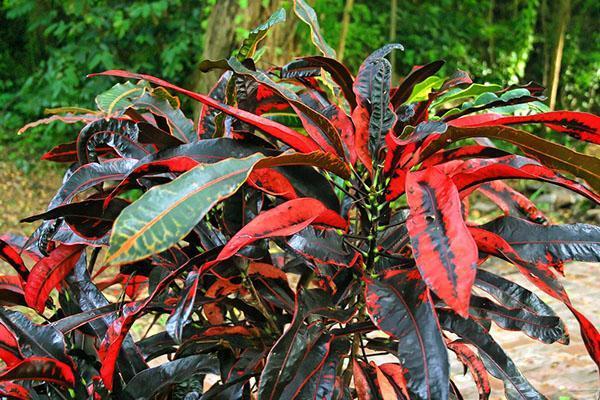 All specimens of codiaeum croton grown in indoor conditions are numerous hybrid forms belonging to one botanical species Codiaeum variegatum, which among other plant communities can rightfully be considered unique. This becomes clear if we consider the representatives of this species of Croton in the photo..

Not only do such images literally stun with a riot of tropical colors, but also surprise with the variety of shapes of leaf plates. It is on the latter basis that the modern classification of crotons is carried out. In addition to plants with oval, elongated-lanceolate or pointed-elliptical leaves, today there are more bizarre varieties and hybrids at the disposal of flower growers.. 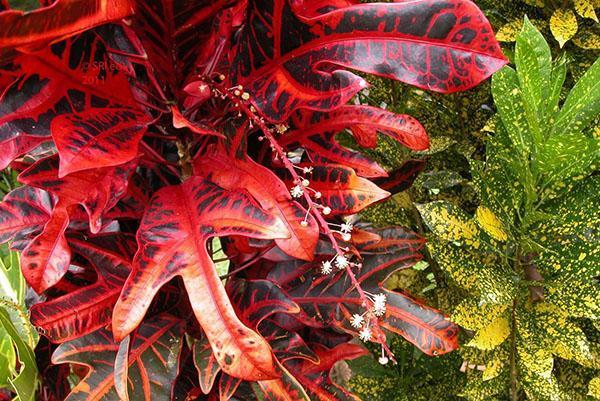 The three-lobed, trilobium, and lobed, lobatum form of croton has large leaves in three parts, resembling the foliage of an oak or fig in shape. There are also more exotic varieties with strongly separated or narrowed lateral lobes. An example of a three-bladed form is the Croton Excelent variety known to flower growers with decorative variegated foliage.. 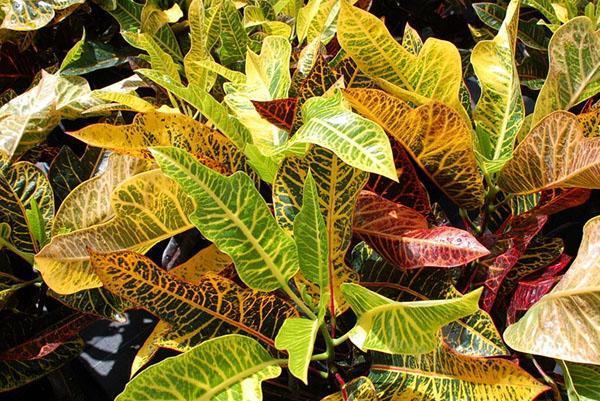 The narrow-leaved, or angustifolium, form of croton is very popular among flower growers. The plants have long, linear foliage that grows up to 20–40 cm, decorated with many green spots scattered over a dark green background. An example of such a croton flower in the photo clearly demonstrates the unique appearance of the plant.. 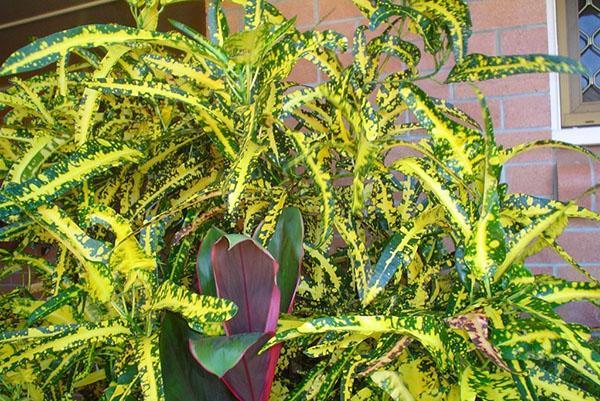 The appendage or appendiculatum form of the croton leaf, as in the photo, can be considered one of the most amazing in the plant kingdom. The leaf plate is ovoid or lanceolate, tapering towards the apex, turns into a semblance of a second cutting, which after some gap expands again, forming a continuation of the leaf plate. 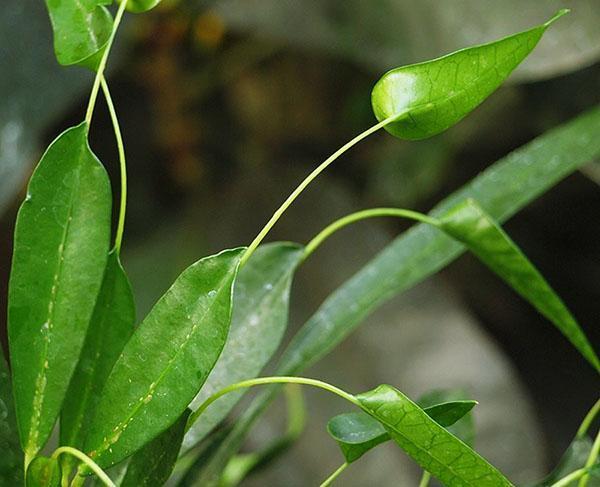 Croton plants, as in the photo, have predominantly green foliage, but there are variegated specimens..

Plants with unusual curly foliage always cause a lot of surprise and admiration.. 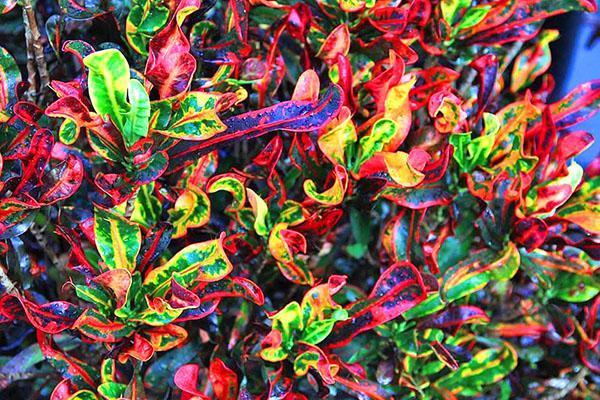 At the same time, in the photo, crotons of the crispum variety can have completely different sizes and colors, from spotty yellow-green to crimson, pink, purple or almost black. 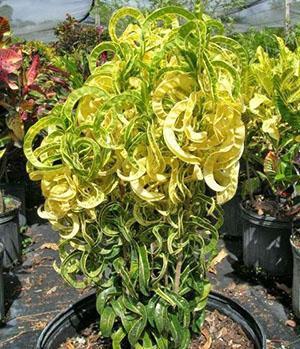 Another unique creation of nature is a spiral form, a variety of cultivated plants of the subspecies Spirale have elongated linear leaves, which gradually curl into a spiral around the central vein. Color and degree of curl vary considerably from plant to plant..

Croton plants of the volutum form acquire an unusual rounded shape. Their foliage is strongly curved along the central vein so that all the tips of the leaves are turned into the crown..