Photos of popular varieties of Ahimenes breeding by Serge Saliba 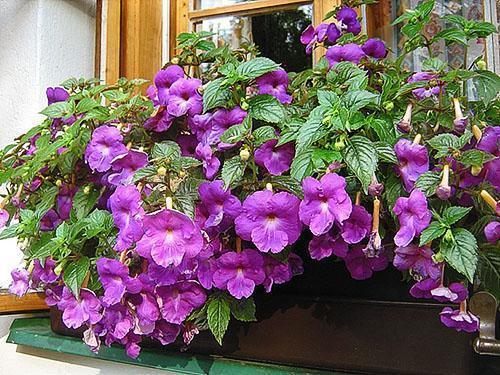 For a novice florist who is only interested in plants from the Gesneriev family, acquaintance with the Ahimenes brings a lot of positive emotions and impressions. Not only can the flowers of this culture be simple and double, the bushes are erect and ampelous, the hybrids and varieties of achimenes offered today are very unpretentious and in exchange for easy care they willingly give the owner bright flowers.

Thanks to these qualities, flower growers have a lot of varieties of achimenes, which are especially loved. These are both time-tested plants and new specimens recently obtained by breeders..

Descriptions and photos of varieties popular with experienced florists and beginners deserve attention and help you find new plants for decorating your home.

On the subject: Achimenes – care and cultivation + video 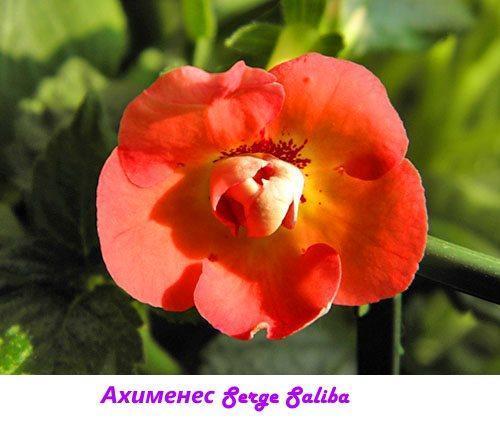 From crossing the varieties of Achimenes Orange and Yellow Queen in 2007, Serge Saliboy received another spectacular plant, which received the name of the author. Ahimenes Serge Saliba forms compact shrubs with erect shoots and medium-sized double flowers of complex color. If the pharynx is yellow, then orange-pink or salmon tones prevail towards the edge of the petals. A brown speck is visible in the center of the corolla. Achimenes flowers can change shades depending on growing conditions, lighting and indoor temperature. 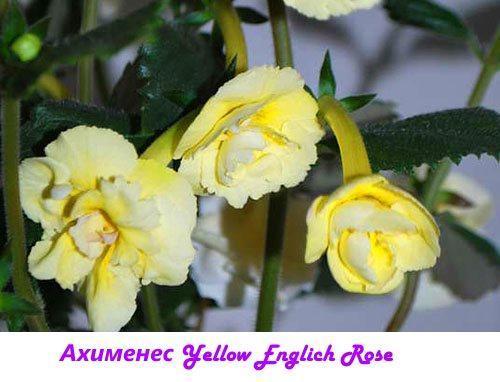 The famous breeder Serge Saliba also contributed to the creation of Achimenes varieties that resemble rose blooming. His Yellow English Rose – Ahimenes, presented to indoor plant lovers in 2012, has become one of the author’s brightest achievements. Large double flowers of a beautiful yellow color are distinguished not only by the size and purity of the shade, but also by the wavy fringed edge of the petals. To maintain color, according to the description of achimenes, it is better to keep the variety in diffused light.. 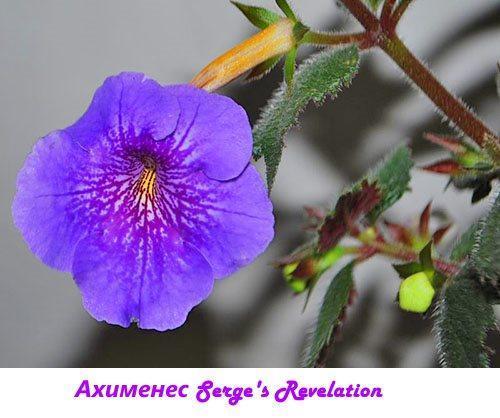 The Ahimenes of Serge Saliba are well known and loved by flower growers in many countries. One of the most famous plant varieties is Serge’s Revelation, bred in 2013. The plant differs in that it forms extremely large, up to seven centimeters in diameter, achimenes flowers with blue-violet petals and a speckled corolla center. 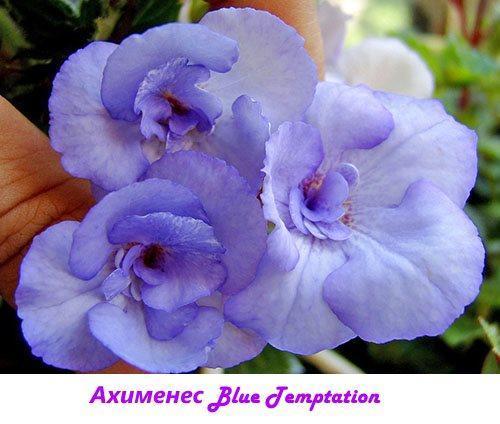 Achimenes flowers of blue or pale lilac color are always pure and delicate. Achimenes Blue Temptation, created by S. Saliba in 2012, is no exception. Terry corollas that unfold on plants have an interesting shape, pure color and perfectly tolerate the summer heat. According to the description, the achimenes of this variety is very unpretentious and pleases with a lush long flowering. 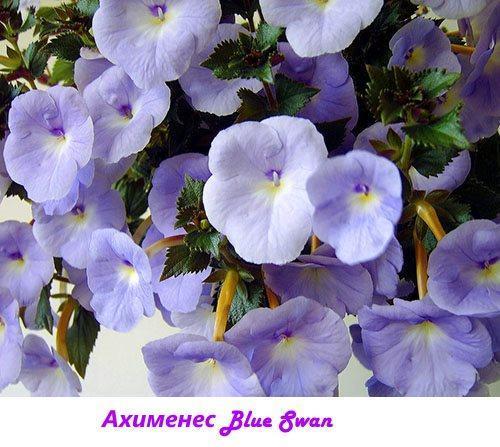 Achimenes Blue Swan was registered by S. Saliba in 2013 and belongs to the Achimenes varieties with constant color of flowers, no matter what conditions the plant is in. Large, up to six centimeters in diameter, achimenes flowers have a delicate blue color, which changes to a light yellow or creamy tone towards the center of the corolla. The blue flowers of achimenes, in the photo, look spectacular against the background of dark foliage, forming beautiful cascades. 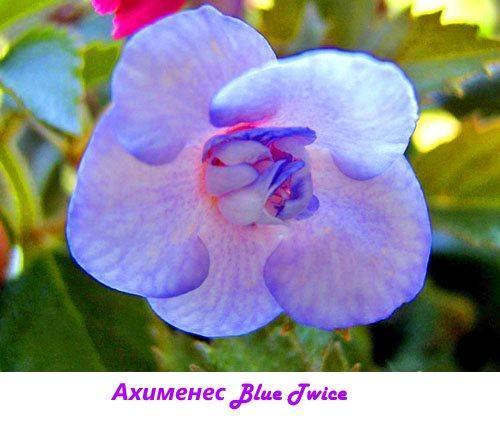 Ahimenez Blue Twice, the author of which is the famous S. Saliba, appeared much later, only in 2011, but has already become a decoration of many houses. Semi-double or double, not very large flowers of this plant are painted in light blue with a lilac shade. On the rounded curved petals, a pattern of veins is noticeable. In the center of the rim there is a spray pattern. The achimenes bush, as in the photo, is formed from erect shoots with green toothed foliage. 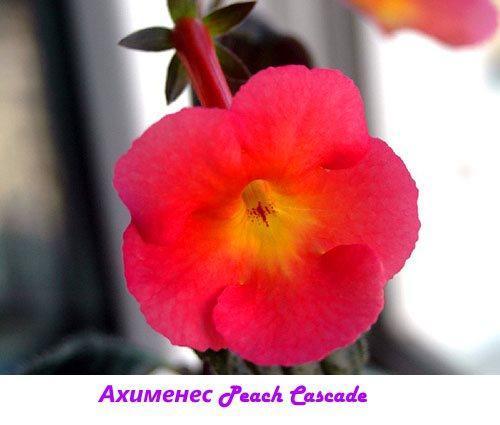 The large flowers of Achimenes Peach Cascade are a gift for those who love bright colors. The ampel plant, obtained in 2009 thanks to the selection work of S. Saliba, generously endows the owner with catchy flowers of a peach or pink-orange hue. This Achimenes strain responds well to outdoor cultivation, but the color of the corolla can vary depending on the conditions created for the plant.. 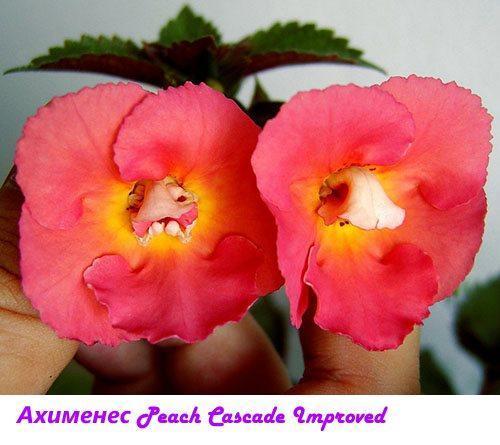 In 2012, Serge Saliba introduced Peach Cascade Improved with semi-double flowers larger than the first variant. The center of the corolla is decorated with additional petals and a rich yellow spot. The plant forms erect shoots covered with green foliage, blooms profusely and for a long time. 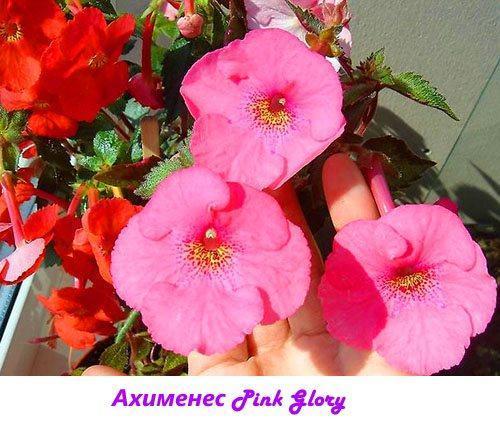 Variety with large pure pink flowers Pink Glory – Achimenes of Serge Salib’s selection, bred by the master in 2009. The edges of the petals in this variety are corrugated, and in the center of the corolla there is a yellow spot, strewn with purple or deep pink specks and strokes. The bush, according to the description of achimenes, consists of erect stems covered with dark green leaves with a burgundy back side. The plant is compact and unpretentious, it blooms beautifully in the fresh air, and in partial shade, and in the sun. 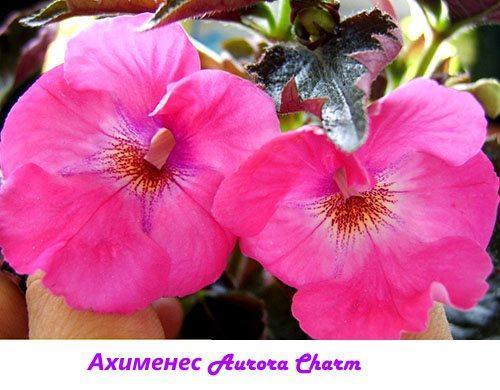 A brightly blooming hybrid of Aurora Charm – Achimenez by Serge Saliba, introduced by the author in 2009. The plant is distinguished by abundant flowering, and it is interesting not only the general impression of the bright compact bush, but also of each corolla on it. The flowers are large, bright pink shade with a color towards the pharynx that first becomes lilac and then yellow. The entrance to the pharynx is strewn with purple and purplish brown dots and strokes. 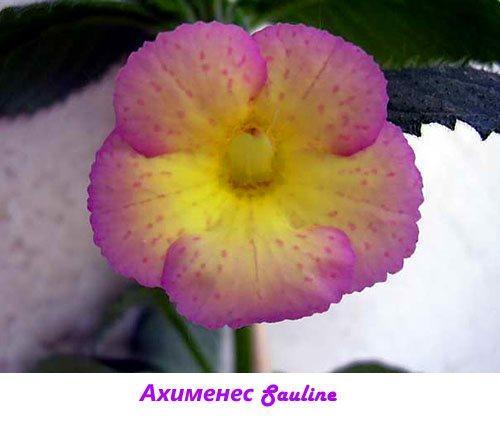 The flowers of this Achimenes variety cannot be called large, but their color is quite remarkable. Ahimenez Sauline of the selection of Serge Salib, obtained by him in 2008, stands out with a light yellow corolla, while along the edge the jagged petals are painted in bright pink-lilac tones. Individual dark pink specks can be seen throughout the flower. Plant is upright with serrated leaves of medium green color. 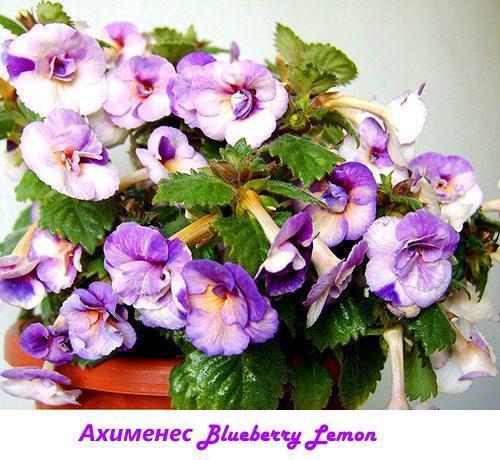 In 2009 Serge Saliba received the amazing Achimenes Blueberry Lemon with semi-double or double flowers. The center of the corolla is colored yellow, becoming thicker and warmer towards the entrance to the pharynx. On the petals of the achimenes flower, spectacular purple, like watercolor stains and spots. Leaves are light, shoots, as they grow, become drooping. 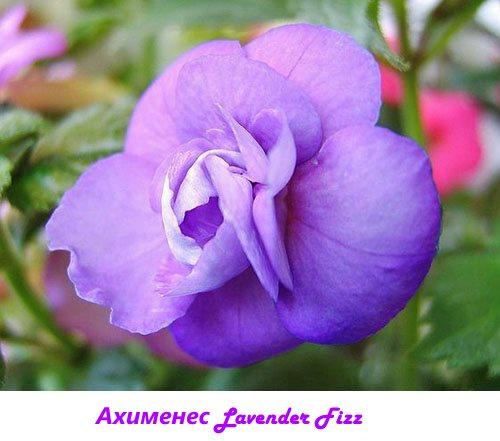 The flowers of Achimenes Lavender Fizz are hard to miss. The variety, bred by Serge Saliba in 2012, will become an adornment of any collection. The compact, upright plants are densely covered with jagged leaves and large double flowers of a surprisingly bluish lavender hue. The peculiarity of this popular variety of achimenes is the light coloration of the back of the petals.. 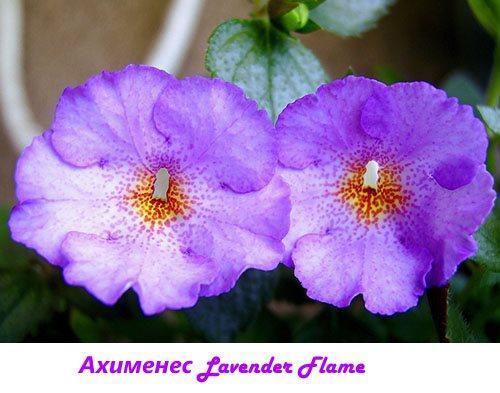 In 2012, lovers of Ahimenes received many spectacular plants from Serge Salib. Achimenes variety Lavender Flame is one of those wonderful gifts with fairly large light lavender flowers. The throat of the achimenes flower is marked by a noticeable yellow spot and burgundy-brown speck, which, turning purple, captures the wavy petals. Erect bush with shoots covered with light green foliage. 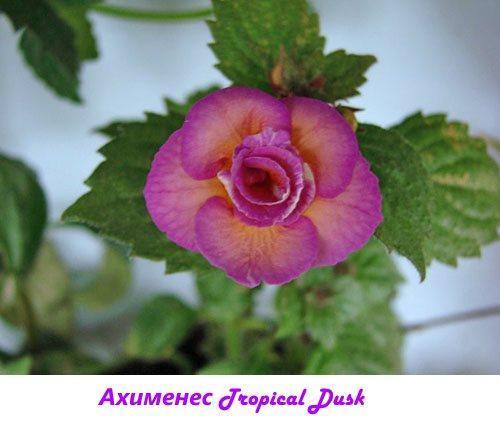 The Ahimenes varieties of Serge Salib are the favorites of domestic florists. These include the Tropical Dusk achimenes obtained in 2011, with medium-sized double pink-purple flowers and green erect shoots. The peculiarity of the plant is the combination of purple and pink-orange shades on the petals, which creates a glow effect and gives a special charm to the flowers of achimenes. 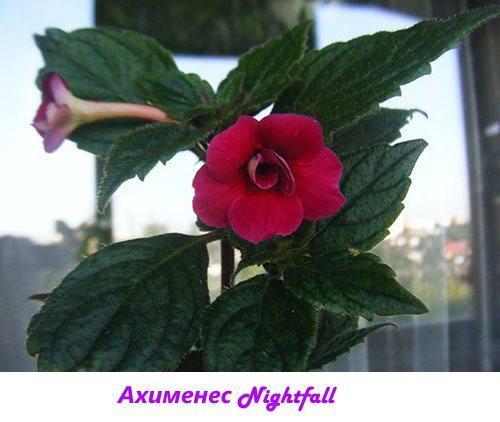 Ahimenez Nightfall from S. Saliba does not match the previous plant in the size of flowers. But the variety introduced in 2011 is no less interesting and loved by flower growers..

Terry corollas of achimenes flowers are distinguished by a thick cherry color, which becomes as rich and juicy as possible towards the center. Today this variety of achimenes can be called the darkest of the existing ones. The bush is small, compact. The leaves are dark with a purple glow on the veins and the back. 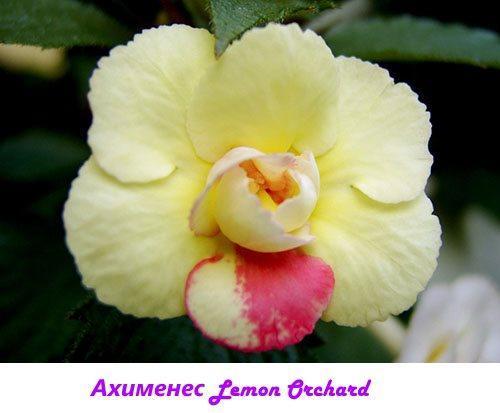 Having created the ampelous variety of achimenes Lemon Orchard in 2010, Serge Saliba invited flower growers to admire the combinations of lemon yellow and pink shades. Terry corollas of medium size are surprisingly painted in crimson-pink tones along the edges of the petals, and sometimes bright carmine strokes appear on the petals. The greens on the cascading shoots of this variety, according to the description of achimenes, are distinguished by a silvery tint. 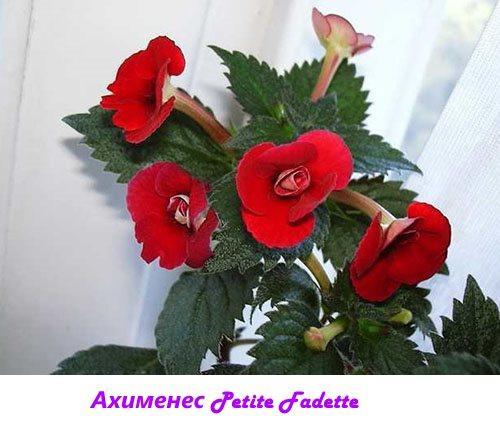 Achimenes Petite Fadette, presented in 2007 by Serge Saliba, has medium-sized, semi-double or double flowers of a beautiful red hue. The color becomes more intense and thick towards the entrance to the pharynx. The dorsum of the corolla is lighter. The leaves are also small, rather dark. Achimenes variety that can be considered miniature in all respects. 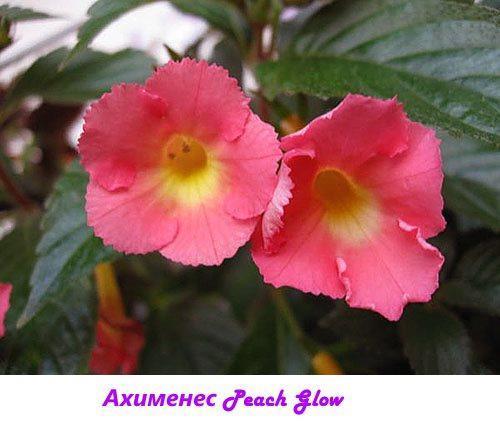 Medium-sized with drooping shoots of Achimenes Peach Glow from R. Brumpton blooms very readily and profusely. Achimenes flowers are not very large, but attractive with a delicate, pink color of the petals and a yellow center and throat of the corolla. 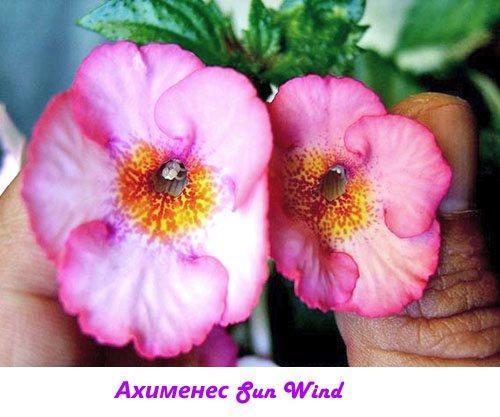 In 2010, Serge Saliba presented a beautiful ampelous plant with pale pink flowers adorned with a bright fringed border and a yellow spot in the center of the corolla. From the center to the edges of the petals of achimenes, as in the photo, brown and orange spots are scattered. This is how the author of the variety represents the solar wind, because this is the name given to the Ahimenes Sun Wind, which is greatly loved by flower growers.. 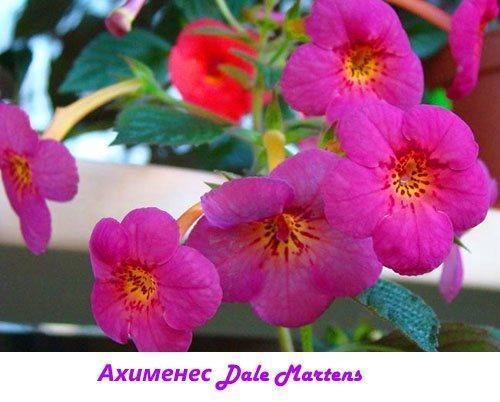 As a result of crossing the Elegance and Yellow Queen varieties in 2007, Serge Saliba managed to get a new semi-ampere Achimenes Dale Martens. Plants with raspberry pink simple flowers, the yellow center of the corolla of which is decorated with a scattering of purple or crimson splashes, became popular with a significant number of followers of the Achimenes.. 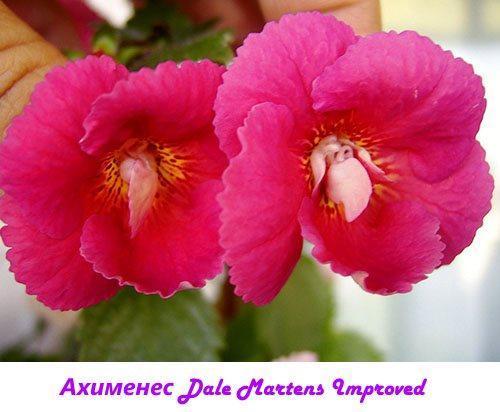 In 2012, the breeder followed up on the success and presented the Dale Martens Improved with large semi-double or double fringed corollas to the achimenez community. Plants are erect and tall, therefore, pinching of shoots is recommended for the achimenes variety. 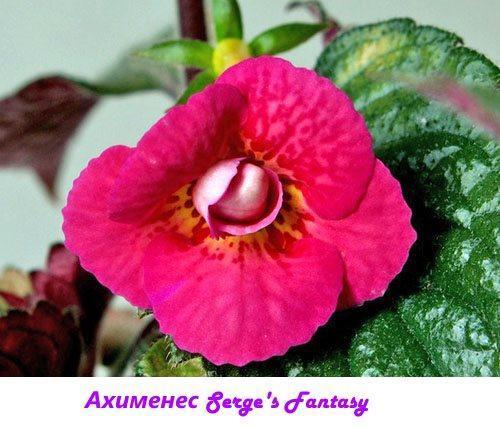 Ahimenez Serge’s Fantasy was born by crossing such well-known and beloved Ahimenes varieties as Elegance and Rainbow Warrior. Terry, rose-like crimson flowers with a yellow center and a scattering of carmine spots on the corolla made the new Achimenes variety, as in the photo, one of the most desirable. 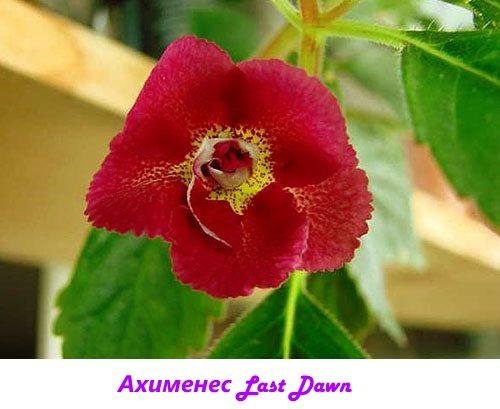 Achimenes Last Dawn by Serge Salib, bred in 2011, has a lot in common with the previous plant. But this is only at first glance! The medium-sized double Achimenes flowers combine the most unexpected shades of red and crimson to give the bloom a truly unique look. Erect bushes are compact and have good branching tendency.. 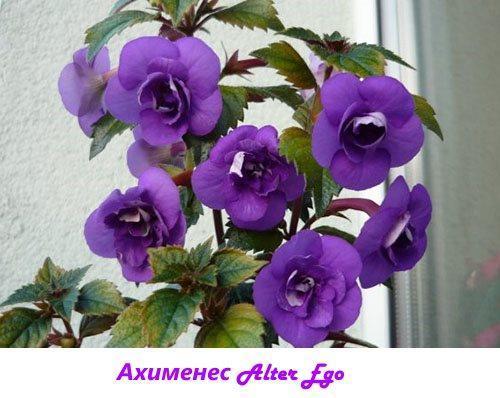 In 2012, breeder S. Saliba introduced the blue-violet variety of achimenes Alter Ego, which stands out among many other large double flowers. The color of the corolla can vary depending on the conditions created for the plant. Large bush requiring pinching and support. 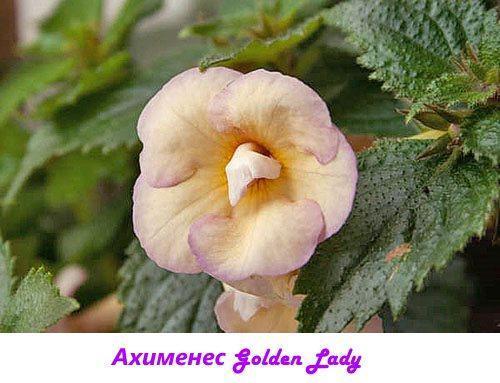 The same parental couple that presented the Serzh Saliba variety to the flower growers became the “culprit” of the birth in 2007 of a new master variety, the Golden Lady Ahimenes. The delicate yellow or creamy flowers of Achimenes are medium in size, have a graceful semi-double corolla and are sometimes adorned with small lilac strokes. The plant is erect, green. 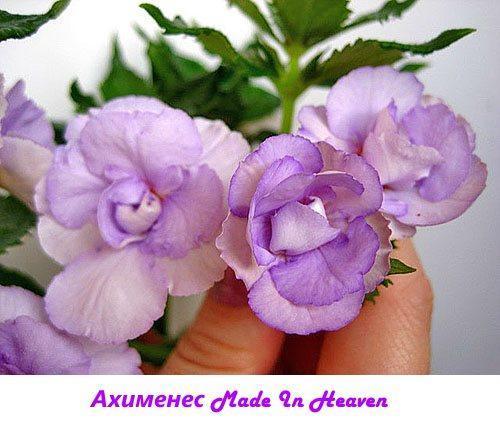 Saliba’s spectacular Made In Heaven achimenes is relatively new, as it only appeared in 2012. However, this does not prevent this variety from actively gaining popularity. Bluish or lavender flowers of achimenes are very large, double, delicate. Bushes are erect, green, with light toothed foliage.

Secrets of the abundant flowering of Achimenes – video