Storage and planting of Achimenes rhizomes 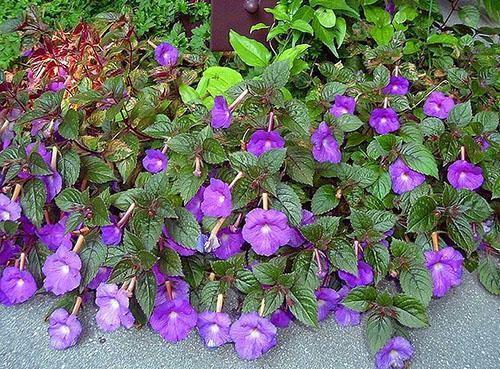 Beautifully flowering perennial herbaceous plants from the Gesneriev family enjoy increased attention of flower growers. Moreover, some of these crops, for example, gloxinia and achimenes, need rest for several months after the end of the flowering season..

In the Achimenes, the entire aboveground part gradually dies off, and a modified underground stem, a scaly rhizome, called a rhizome, becomes the concentration of life..

Depending on the type of achimenes, the cultivated variety and the conditions created for the plant, rhizomes remain without signs of life from 4 to 6 months. 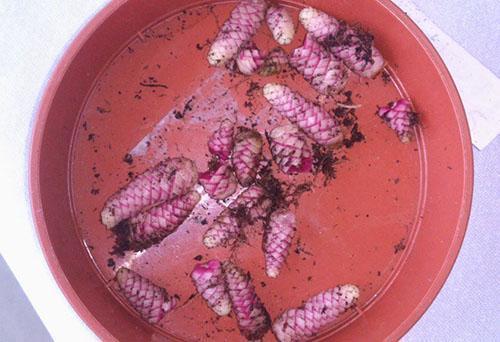 Most often, a kind of “hibernation” of a plant occurs during a short daylight period. It turns out that it lasts from mid-autumn to early spring, falling on the most difficult time for representatives of the green world. From February to April, shoots appear on the rhizomes of achimenes, which indicates that the plant is ready to start a new growing season. And by the fall, care must be taken that the rhizomes are properly formed and able to maintain their viability until spring. See also: Achimenes care and cultivation!

Autumn preparation of rizom for storage 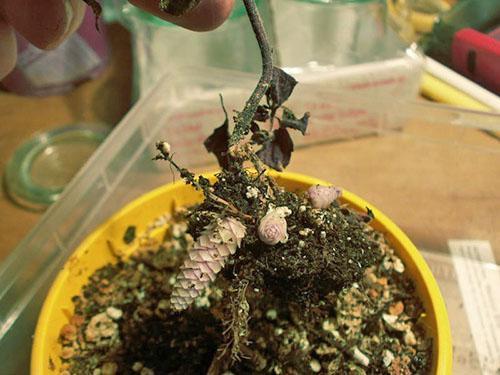 In the fall, when it’s time to rest:

Noticing the first signs of the completion of the growing season, the florist should stop feeding the achimenes and start to reduce watering. If this is not done, rhizomes of achimenes can leave in winter spoiled or with unformed growth points and scales..

The preparation of achimenes rhizomes for storage is facilitated not only by a decrease in watering and refusal of fertilizers, but also by a natural reduction in daylight hours, as well as a decrease in air temperature. If achimenes is grown indoors, where the daytime temperature is close to 30 ° C, and at night it drops by no more than 5-7 ° C, the process of transition to the dormant period in plants is delayed. Such specimens completely stop watering in order to provoke the death of foliage and shoots..

To make the rhizomes easier to endure the winter, and during storage the rhizomes do not dry out or begin to rot, it is better to wait until the aerial part of the plant is completely dry and only then send its many months “hibernation”.

Storage by rhizome of achimenes in the ground 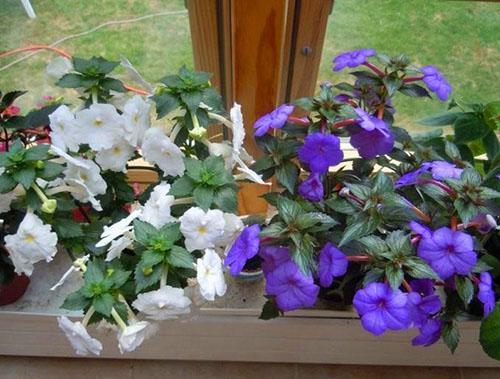 Depending on personal preferences, the number of Achimenes specimens in the collection and other factors, the grower has the right to leave the Achimenes rhizomes in the same pot in which the plant stayed in the summer, or remove the rhizomes from the substrate in order to store them separately.. 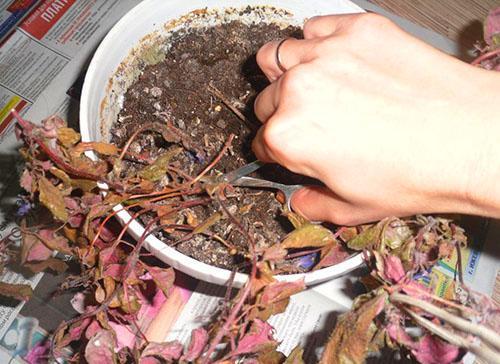 If the rhizomes remain in the soil, all dried remains of the aboveground part of the plant must be removed, and then the container with the soil is transferred to a dark cool room where the soil will not be exposed to moisture.

The best results are obtained when stored with Rhizome Achimenes at a temperature of 10-18 ° C. No feeding or watering is provided for while in such conditions..

In a situation where the collection contains young plants obtained from cuttings this season, the tiny rhizomes left in the pot may not survive during dry cold wintering. It is better to leave the pot with rhizomes of achimenes at room temperature and maintain a slight substrate moisture throughout the winter.. 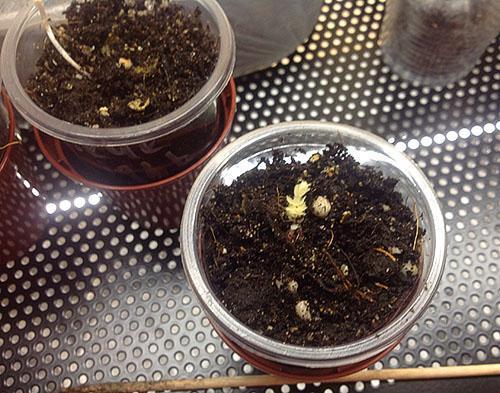 The closer the spring, the more often the grower will have to check the condition of his pet, about the awakening of which is indicated by the sprouting sprouts. If shoots are seen above the soil level, the topsoil is renewed by adding fresh loose substrate, and then the pot is transferred to a well-lit place. In the future, the plant needs regular care and watering..

Experienced lovers of this culture, knowing the characteristics of the cultivated Achimenes, can often predict in advance the awakening of the rhizome and, preventing the emergence of sprouts, remove the rhizomes from the soil. 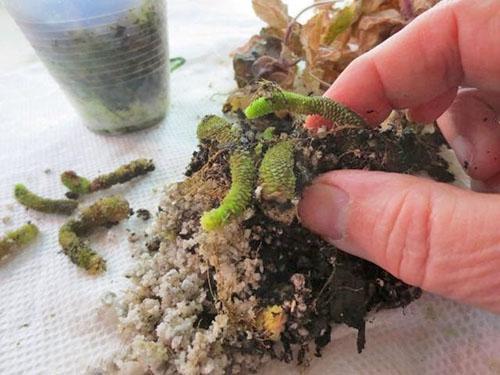 It is better to do this work in about a month after the sprouts appear. In addition, rhizomes wake up more amicably in fresh, non-caked and nutrient-rich soil..

This method of storing the rhizome of achimenes is suitable for flower growers, whose collection is still small. If more than a dozen varieties flaunt on the windowsills, then finding a place to install such a number of pots is no longer easy. Therefore, many Ahimenes lovers prefer a different way..

Storing Achimenes’ Rhizomes Outside the Pot 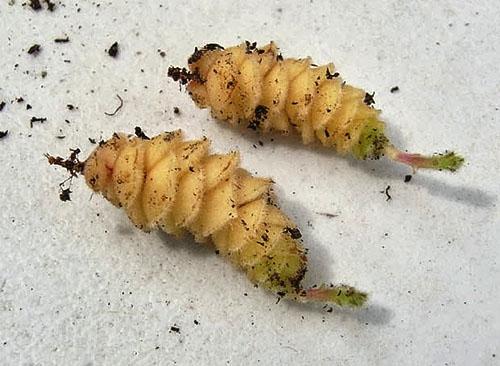 In the fall, when all the shoots have dried up, it is time to tackle the rhizomes of achimenes. Rhizomes:

If the rhizomes of the cultivated achimenes are affected by rot or fungus, such specimens must be cleaned of diseased tissue and treated with a fungicide. 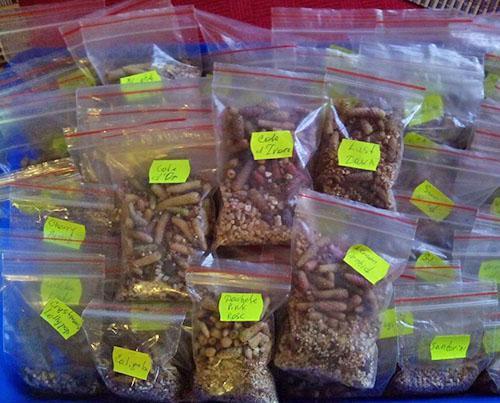 Rhizomes prepared for storage are laid out in hermetically sealed transparent bags, sprinkled with vermiculite, perlite or a mixture of dried sand and peat. 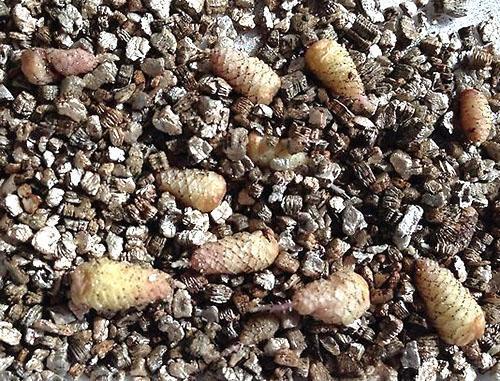 In this form, the planting material for storage is much more compact. In addition, the grower’s access to the rhizomes of achimenes is simplified, they can be examined and re-sorted at any time..

When signs of condensation appear, the bag is opened and ventilated in order to avoid the development of mold and death by the rhizome. Moisture can provoke the germination of rhizomes that have not yet accumulated strength for vegetation.

The rest of the storage conditions by the rhizome of achimenes in vermiculite are the same as when they were left in the ground..

Planting with the rhizome of achimenes 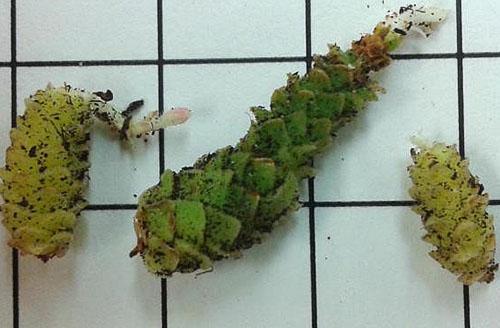 You should not abuse the patience of the plant, because in such conditions achimenes grows weakened, and thin elongated shoots can be easily broken off during subsequent planting.. 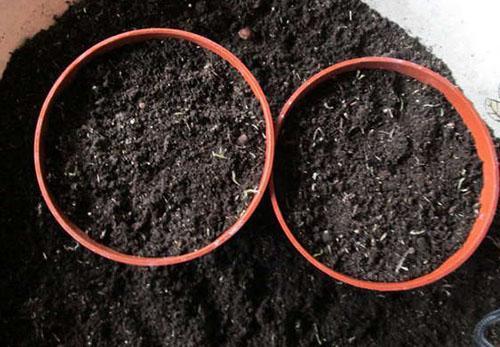 In one pot, depending on the size of the rhizomes, the diameter of the selected pot and the cultivated variety, 5-10 rhizomes are planted. For Achimenes with a superficial root system, it is better to select not too deep containers, but do not forget about the drainage layer. 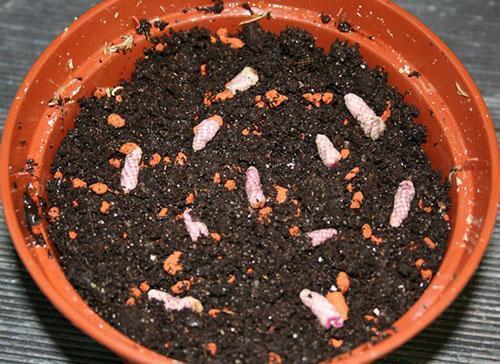 From the moment of planting with the rhizome of achimenes and until the emergence of shoots, it takes from one and a half to three weeks. This period directly depends on the degree of development of the sprout on the planted rhizome and the temperature of the plant.

If the planted achimenes is in no hurry to please the owner with sprouts, he can be encouraged to do this: 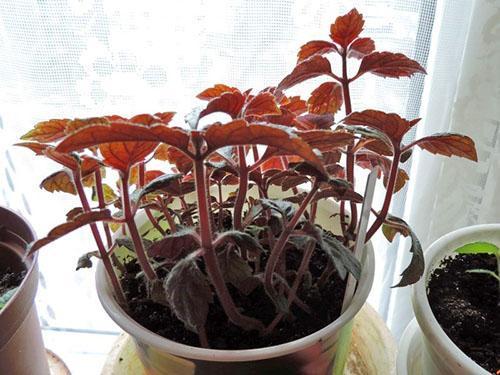 A strong stimulator of development is a single irrigation with water heated to 50-60 ° C. When the seedlings appear a couple of centimeters above the ground, you can add the substrate again. This will give the plants resistance and provide more volume for the newly formed rhizomes..