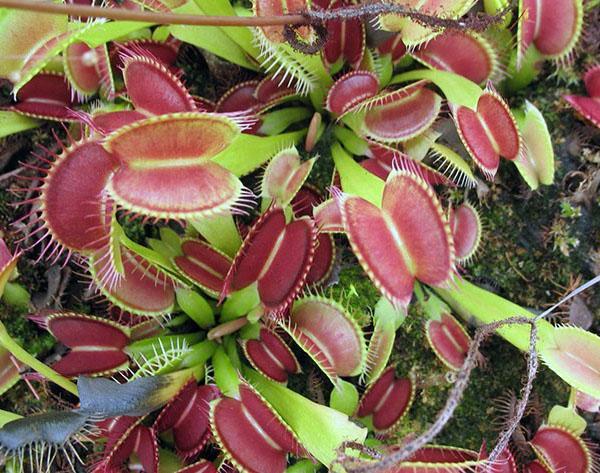 When we think of predators, we immediately imagine a wolf, lion or shark. Hardly anyone would think of the charming Venus flytrap plant. Although it is considered the most popular among insectivorous representatives of the flora, it would not hurt to get to know it better. 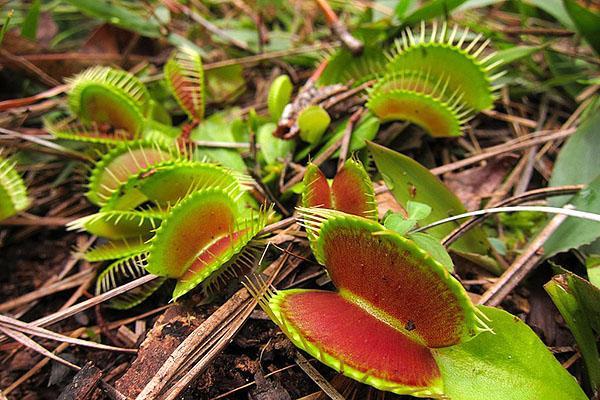 For the first time, the flower was noticed in the 60s of the 18th century and was named – Dionea, after the name of the ancient goddess. In Roman mythology, her name was Venus, therefore the flower is also called the Venus flytrap. An exotic flower is found in America, along the eastern shores of the United States. Today the flower is included in the list of endangered plants, therefore it is under the protection of American conservationists. Despite this, the plant is bred in houses and apartments, as a result, it is known about it in many parts of the world.. 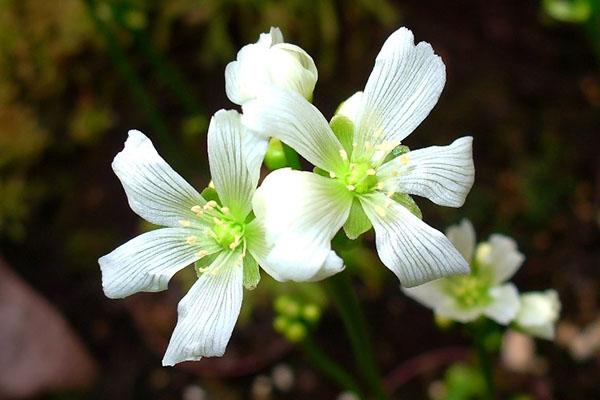 The Venus flytrap belongs to the species of insectivorous representatives of the plant world, the Rosyankovye family. It grows up to 15 cm in height. It has bulbous stems. Snow-white buds are collected in inflorescences that appear on a long flowering shoot.

Since a predatory plant grows in a natural environment on soil where there is not enough nitrogen, it needs special feeding. Various insects, slugs and even mollusks make up for the lack of this element. 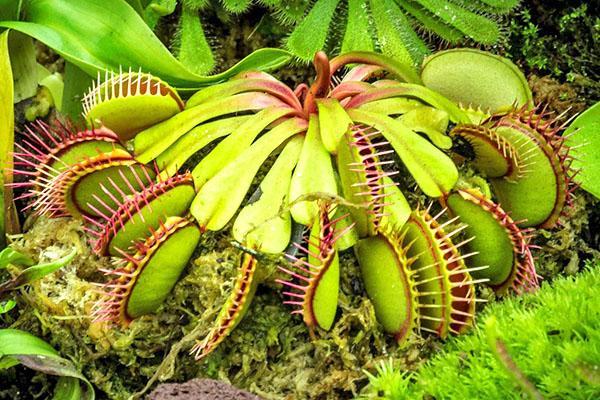 Leaves are a kind of visiting card of the predatory plant Venus flytrap. It is interesting that on one copy they are of different types, but each is very important for the favorable development of the flower. When spring comes, 4 or 7 leaves grow from a short underground stem, which form a pretty rosette. Over time, long shoots with white inflorescences appear on it. During the flowering period, the rosettes die off and dense leaf plates grow in their place. They are a great support for future traps.. 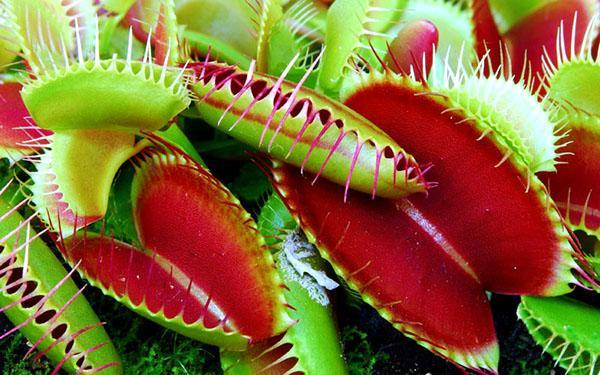 An original “trap” for careless insects is formed at the tips of young rosette leaves. As summer approaches, they become longer, standing vertically to the rosette. The traps themselves consist of two plates, which are framed by sharp spikes. The inside is covered with fine hairs that secrete nectar. 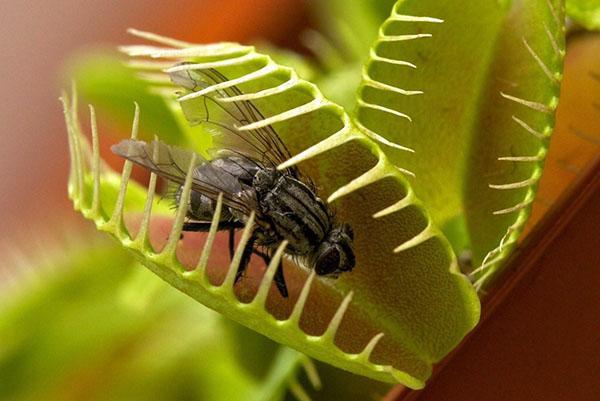 The insect flies to a pleasant aroma and becomes a delicious delicacy of a predatory flower – the Venus flytrap. A light touch on the sensitive bristles causes the trap to snap shut instantly. The leaves close and the insect dies over time. Interestingly, within only 30 seconds, the plant determines the type of victim trapped. If it is a dry leaf, branch or water, the flaps open, and if it is small living creatures, it’s time to start your meal.. 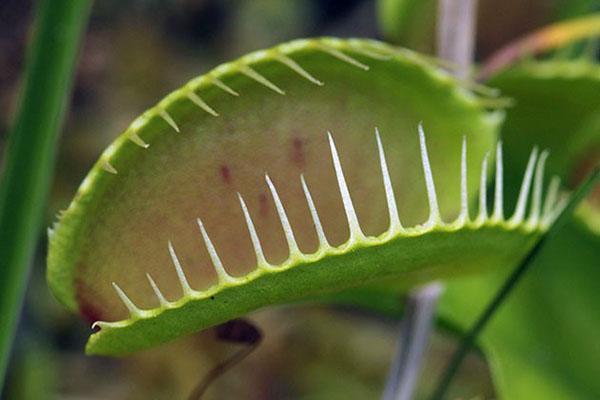 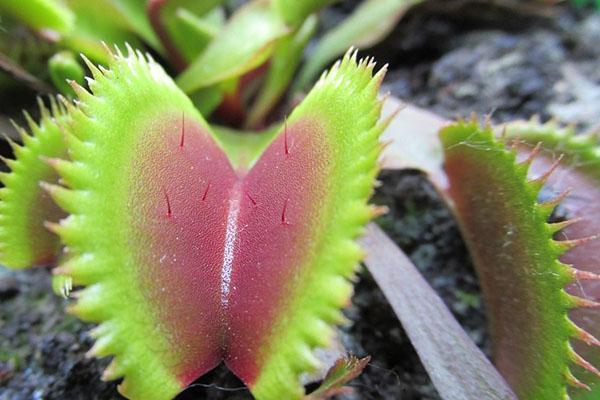 The processing of insects takes up to 5 days. Some are over-etched for a whole week or even 10 days. After full saturation of the Dioneus – the Venus flytrap – opens its exotic “jaws”, waiting for a new victim.

The trap stops working if at least 3 digestion processes have occurred in it. Some flycatchers can digest up to 7 insects in a row.. 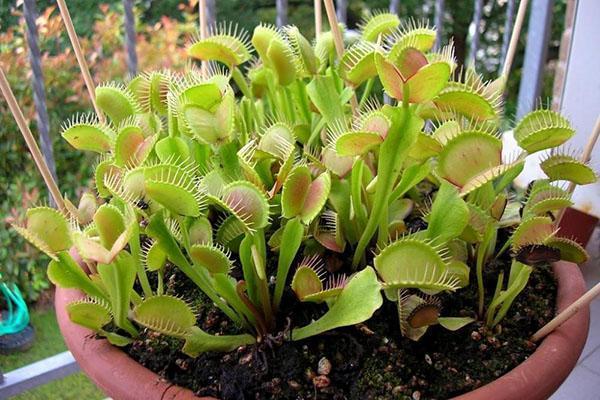 An exotic plant grows on the territory of Russia, mainly on window sills in residential buildings, and sometimes it is found in personal plots. Within the main species, plants have some differences:

On the basis of these data, the original varieties of the flower, the Venus flytrap, were bred, the description of which helps to imagine them.. 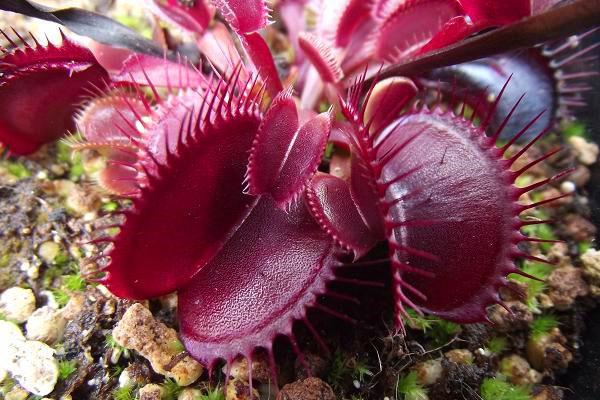 This type of Dionea is distinguished by red leaf plates and traps. The hue does not change with the light. It always remains rich and juicy. A thin green line is visible on the outside of the cute trap.. 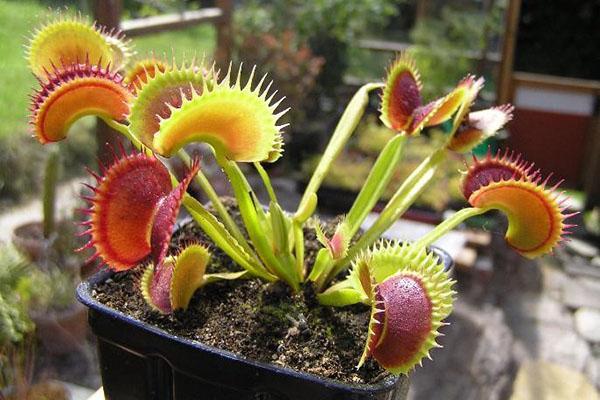 This plant grows no more than 10 cm, but it has more than a dozen miniature traps. They are located vertically to the leaf outlet. The outside of the trap is painted a deep green, along which a red line runs. The inside is usually scarlet. 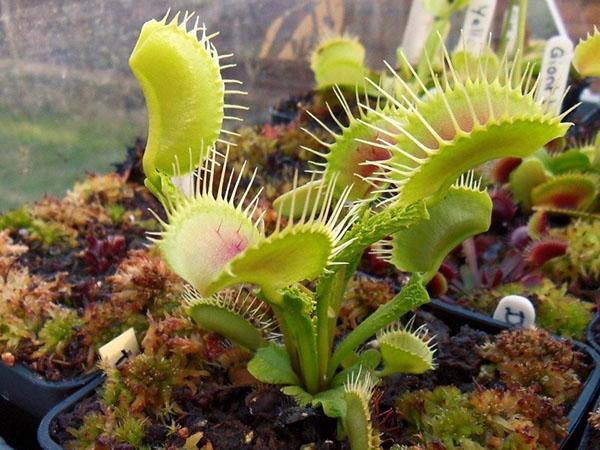 The originality lies in the fact that different types of traps are formed on the same plant. When the “predator” is still young, all the elements of the plant are colored green. Only a few years later, the traps turn red. 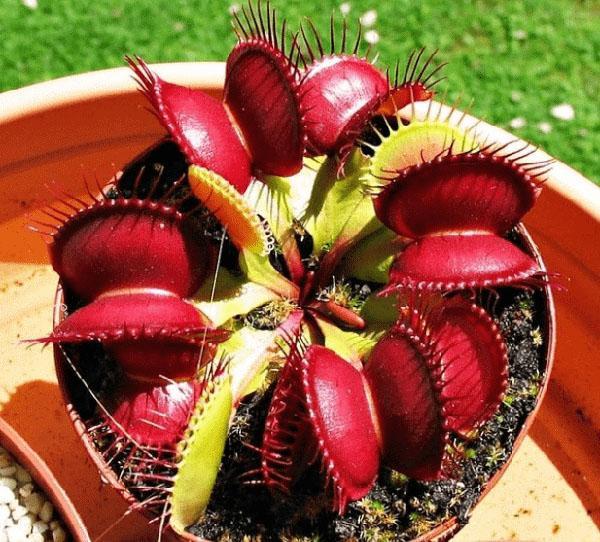 The variety is characterized by traps up to 5 cm in length. They form quickly enough on a predatory plant. At first, the flaps are painted in a bright color, but over time they become dark red.. 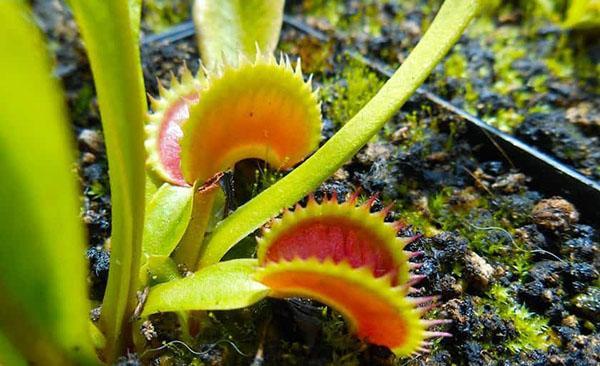 The flower has luscious green leaf plates. The trap is red on the inside and green on the outside. A graceful red stripe runs along the outside along the miniature spikes. A truly charming variety. 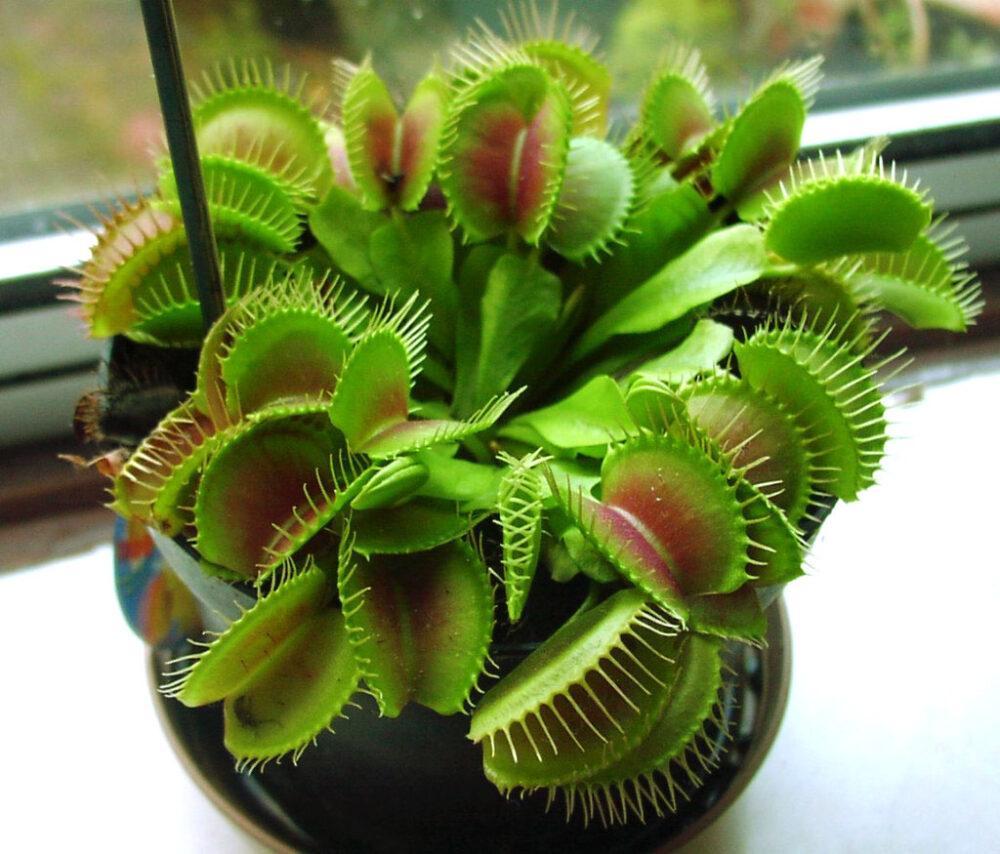 Dionea has horizontal leaves and traps that are bright green. The inner region, in young specimens, is usually pink, but later becomes more reddish.. 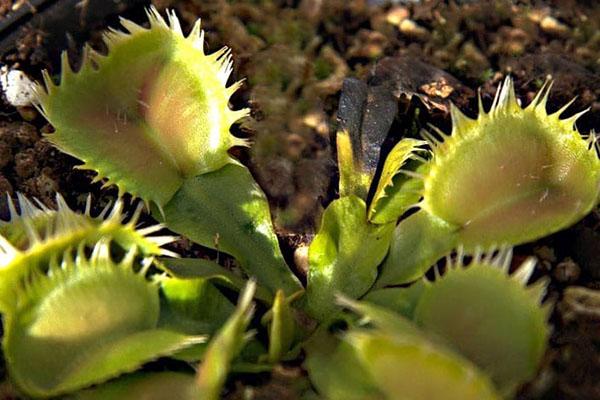 The variety is distinguished by an unusual type of traps. They are slightly elongated and open only on one side. They often stick together arbitrarily.

Rules for caring for an unusual plant 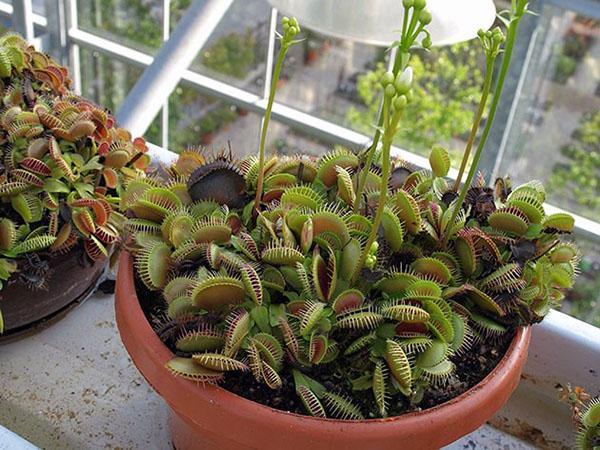 To successfully raise a charming predator at home, you need to create favorable conditions for her. To do this, you need to choose a suitable place. Undoubtedly, the best option is a windowsill, since the plant needs sunlight for at least 5 hours a day. If it is not enough, additional lighting should be arranged. Some color lovers grow the “predator” in terrariums to create a suitable humidity. In this case, the backlight is required.

The window must face east or west. Otherwise, the plant may get sick.. 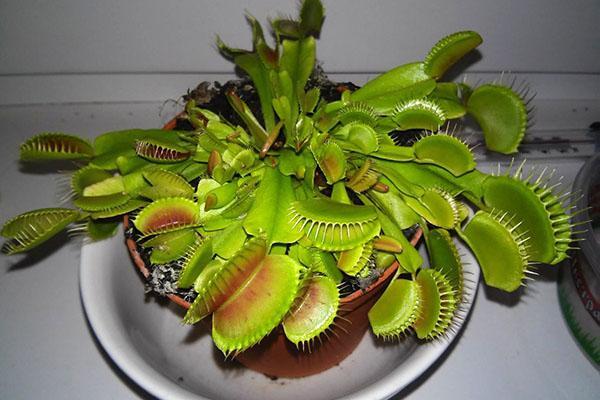 With proper home care, the Venus flytrap takes root well on the balcony in the summer. In this case, the temperature should be monitored. In summer, it can reach a maximum of 30 degrees Celsius, in winter – only up to 7 ° C. If the plant is indoors, it should be regularly ventilated, but without drafts. The flycatcher does not like sudden movements and extreme situations..

It is better to water Dionea with rain water (you can use distilled water). The natural liquid is collected in plastic containers, defended, and then used for watering. The soil in the plant pot should always be moist. With a lack of it, traps can die.. 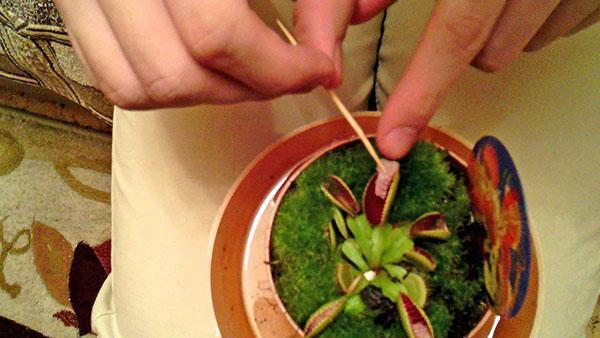 Interestingly, the plant does not need additional fertilization. After all, she receives important elements by feeding on various insects. For the entire growing season, it is enough to feed the plant with two or three live flies, mosquitoes or small spiders. The Venus flytrap shown in the photo feels great after such a meal..

Recommendations for growing an overseas plant 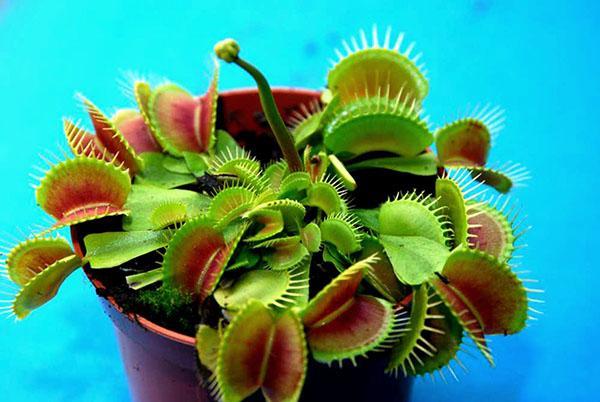 To grow dionea at home, you need to follow simple guidelines. When spring comes, the plant blooms in lush white inflorescences. They need to carry out pollination by hand, doing it carefully, but carefully. A month later, miniature boxes with planting material are formed on the pedicels. 90 days after pollination, flowers can be planted in pots. 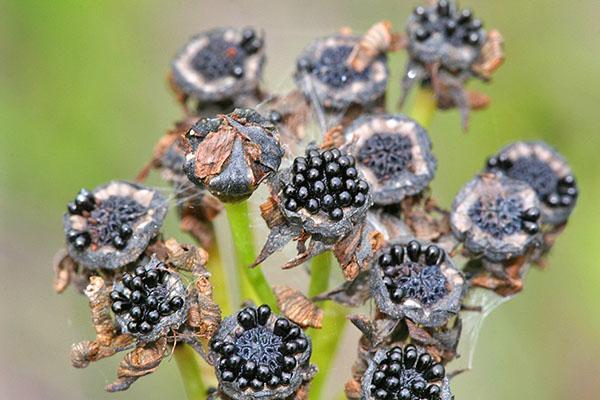 If you know how to grow a Venus flytrap from seeds, an exotic “predator” will appear in the house to the delight of the household. They should be sown in warm soil, consisting of sand and sphagnum moss. The containers are placed in a special greenhouse. For 20 days, it is advisable to ensure that the soil does not dry out. If the seeds of the Venus flytrap are planted densely, the seedlings will have to be planted. 2-3 plants are placed in each separate pot. There they develop for about 3 years until they fully mature.. 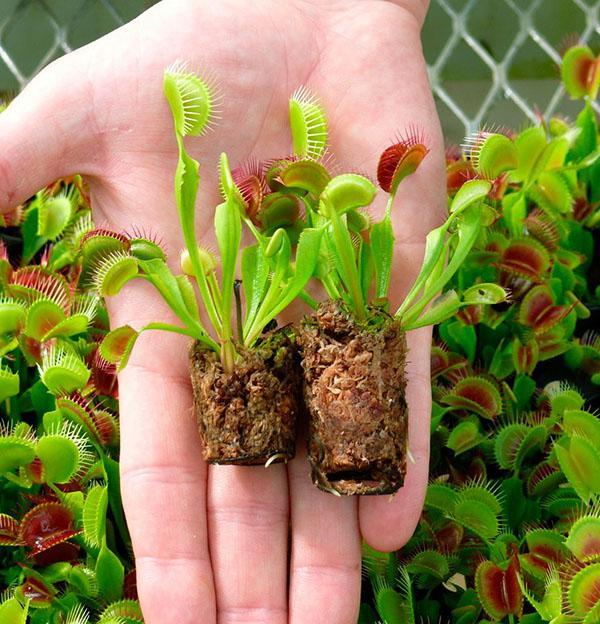 In order for Dionea to be able to delight household members for a long time, she needs a regular rest period of about 3 months. The dormant plant doesn’t look very attractive. Some even think it is dying. The overwintering of the Venus flytrap begins with the cessation of plant growth. The leaves darken to a brown color and dry out over time. They should be cut. 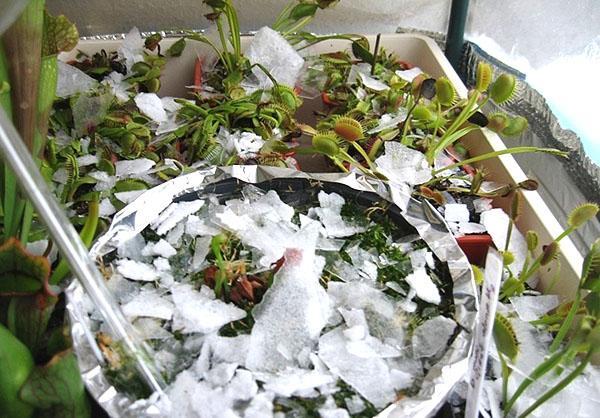 Usually, winter dormancy lasts from late autumn (November) to the end of February. All this time, the plant is moderately watered, preventing the substrate from drying out. It also needs daylight, albeit in less quantity. The temperature in the room where the flycatcher hibernates should be no higher than 8 degrees. When winter ends and the days get longer, the plant comes to life. Tender shoots appear, which will grow only at the end of spring. And a charming predatory plant will again settle in the house – the Venus flytrap.

Preparing a flycatcher for winter – video