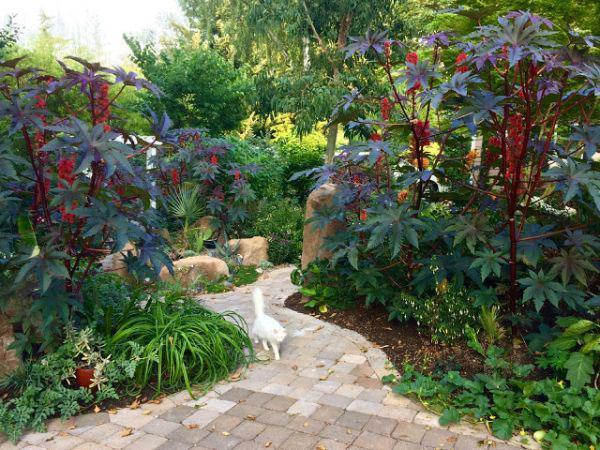 Few plants that naturally live in the tropics can adapt to the conditions of the middle lane. Such unpretentious ornamental crops include castor oil plant, planting and care in the open field, which will not complicate even the most inexperienced summer resident.

Having seen castor oil plant at least once, it is difficult to confuse with some other large, with finger-like leaves up to 80 cm in diameter and brushes of spiked seed pods. The culture has an unassuming disposition and an enviable growth rate. Even in the middle lane, the height of the castor plant can reach 3 meters. In more familiar climates, castor bean is a perennial with seeds rich in castor oil. In summer cottages, seed pods do not ripen, and a plant called “castor beans” or “Christ’s palm” is cultivated as an annual.

Planting castor bean for open ground and care for seedlings 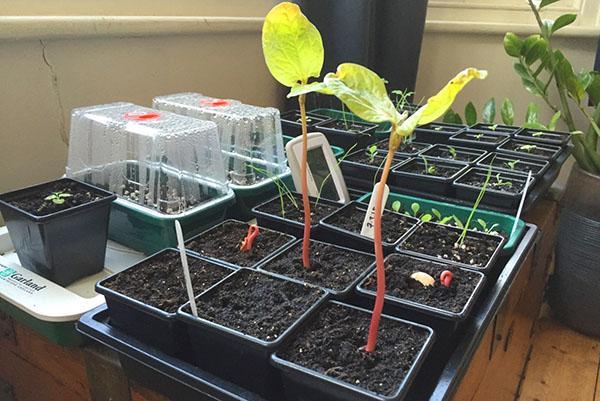 The castor oil plant is grown using large convex seeds with a painted surface. During the spring months after sowing, they will have time to germinate, get stronger and give the first true leaves. Planting castor bean seedlings for open ground and care for seedlings is carried out in early spring.

To accelerate the emergence of sprouts, seeds with a dense shell are soaked for 24 hours in warm water. Then they are planted in separate cups or peat pots, deepening by 1–2 cm.

The seedlings are quite large, large containers are taken for planting. In the future, when it is time to plant in open ground, this will help keep the castor bean root system from damage.. 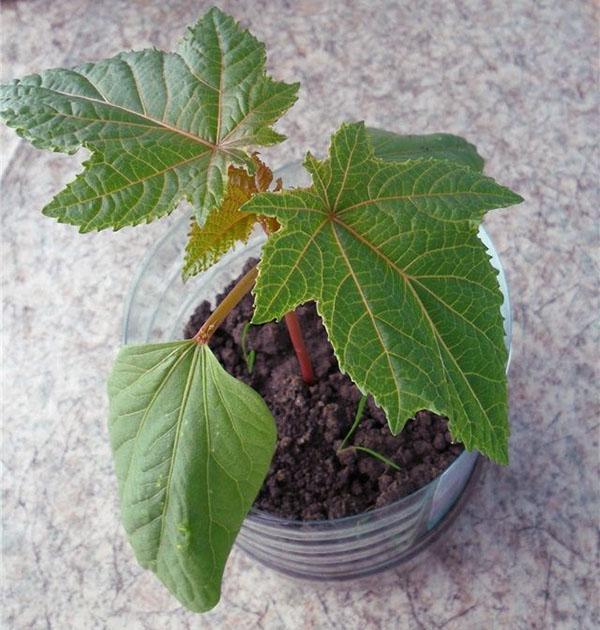 Cups with seeds are covered with foil and placed closer to the window, where the temperature will be in the range of 15-17 ° C. When 7 days have passed, the containers are brought out into the light. The first shoots can be seen not earlier than after 18–20 days. Until this moment and after, until the time comes for planting and caring for castor oil plants in the open field, the seedlings are provided with: 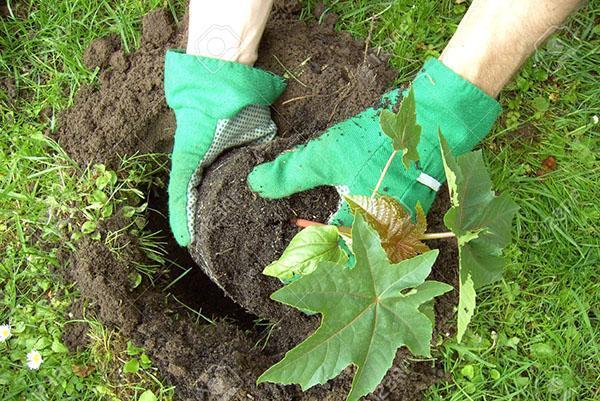 When to plant castor oil plant in open ground? The best time is May, when there is no danger of cold weather returning, and the soil warms up enough. A week earlier, they begin hardening the crops, taking them out to fresh air. 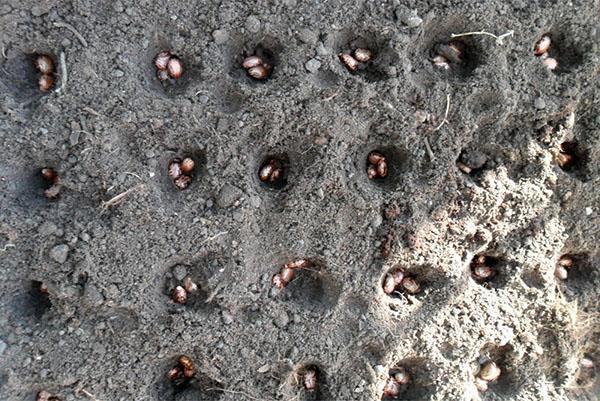 The seedling method is suitable for planting and caring for castor bean in the open field in Siberia and other areas where the spring can be long and the summer is not as long as we would like. It is not necessary to grow seedlings in the southern regions. It is enough to properly prepare the seeds and sow them immediately at the permanent residence of the plants..

To speed up germination, sanding the surface of the castor bean seed, especially the lateral groove, with sandpaper will help. Castor bean germination does not exceed 50%, processing and increasing the number of seeds will help to grow the number of bushes needed.

Seeds are buried in dug and loosened soil, pre-mixed: 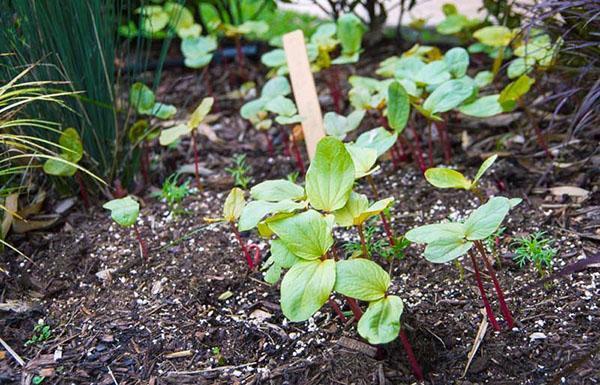 A fast growing, powerful castor bean plant requires a lot of nutrition and light. Its root system requires a loose, well-drained substrate, but an area often visited by winds is not very suitable due to the danger of breakage of shoots.

Sowing is carried out to a depth of 6–8 cm, in May, and the planting of castor bean in the ground in the Urals, in the Northwest is carried out a little later, when the soil warms up and the seedlings do not freeze. To get a voluminous bush, you can put not one, but 2-3 seeds in the hole. Seedlings appear in three weeks. From the sprouts that have appeared above the soil, the hard shells of the seed that inhibit the growth of leaves are carefully removed. 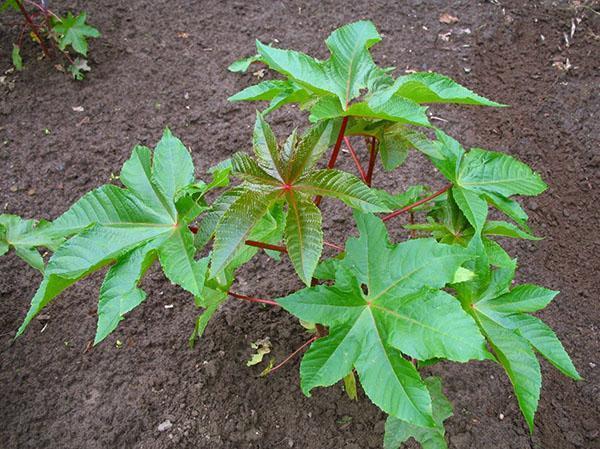 The last week of May and the first half of June is the time for planting castor bean in open ground, and then caring for an unusual, but very effective plant.

During the warm season, castor bean is actively developing, spending a lot of nutrition and moisture. Therefore, a couple of weeks before transferring the seedlings to the flowerbed, holes up to half a meter deep are dug under them, which are filled with a mash of garden soil, manure or humus. The substrate is watered and covered until planting with a dense film..

When a young plant gets to such a place, it quickly acclimatizes and begins to form a lush crown. Seedlings are planted in peat pots or with an intact earthen clod at the same level at which the castor bean grew before.

Simultaneously with planting in the ground, they dig in a solid support for a large ornamental plant. The castor bean planting site in open ground is slightly compacted and watered so as to wet the ground to a depth of 15–20 cm. 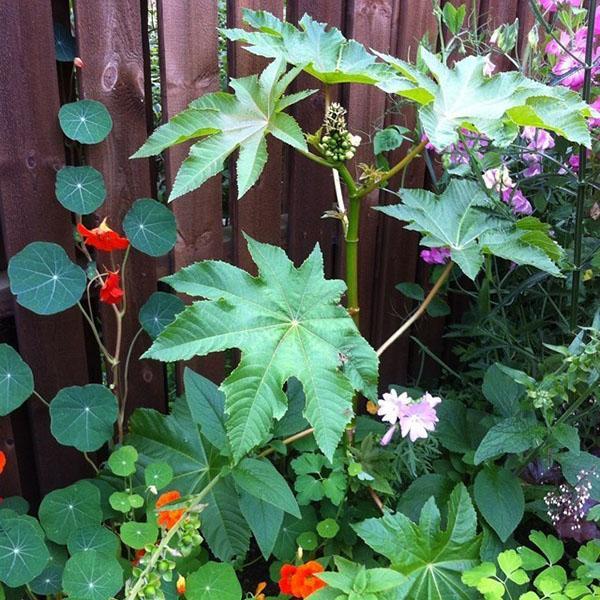 Castor oil plant is one of the most capricious and undemanding ornamental plants. The main task of a summer resident who decides to decorate his site with such large vegetation is to organize and conduct: 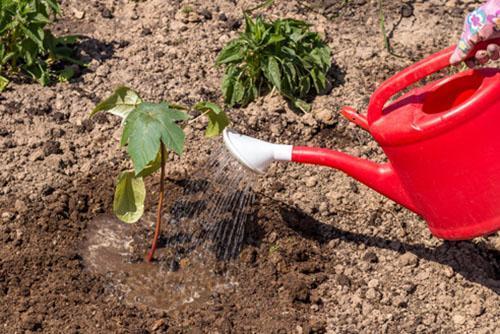 Before the buds appear, the plants are fed with complex compounds with a predominance of nitrogen. It will help the castor oil plant grow stems and foliage. In the second half of summer, a large annual can be supported with any fertilizer with trace elements, potassium and phosphorus, and also do not forget about abundant watering.

Once every five days, at least a bucket of water is poured under each castor bean bush. In dry periods, the soil is moistened 2-3 times more often.

In the middle lane, the plant does not winter. First, the aerial part dies off, then the time for the root system comes. When planting castor bean in open ground for the winter, all greens are removed in advance, the soil is cleaned of plant residues, dug up, introducing organic fertilizers. So that the soil does not become scarce, with the onset of spring, castor oil plants should not be planted in this place.. 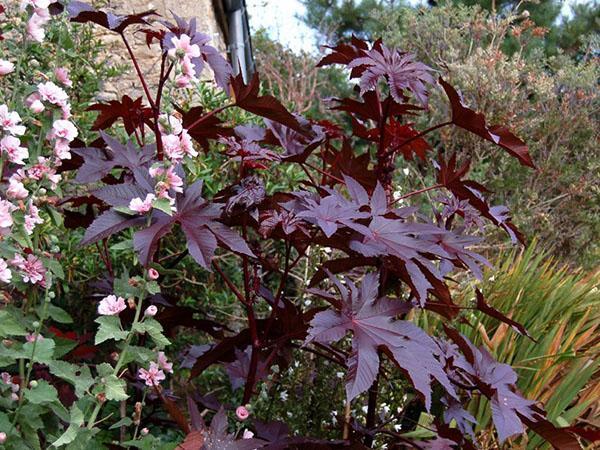 Castor bean care is carried out with gloves, preferably in cloudy weather, in the evening or early in the morning, before the sun appears, the plants are poisonous. The ricin it contains is toxic if swallowed or swallowed..

How to plant castor bean seedlings in the ground – video