How to care for alocasia at home Amazonica Polly 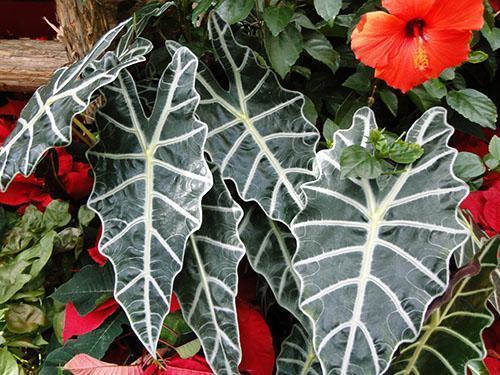 Alocasia, as a genus, includes from 70 to 100 original and very different in appearance and size varieties, mostly growing in the south of the Asian and Pacific region. The history of the discovery and the beginning of the study of alocasia has a little more than a hundred years, but already during this time the plants were noticed by lovers of indoor floriculture and even managed to become the subject of controversy among botanists and breeders..

It is with one of the most popular representatives of the genus among gardeners, Alocasia Amazonica, that a very interesting story is connected..

The history of the emergence and distribution of alocasia Amazonica 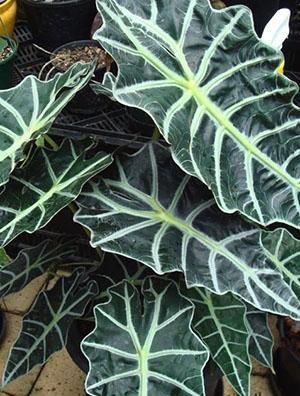 Despite the mention in the name of the culture of the South American river, this type of alocasia has nothing to do with the Amazon and its famous rainforests. You will not find this amazing plant on the islands of Oceania, Melanesia and other habitats of wild species..

The fact is that Alocasia Amazonica is an artificially obtained hybrid, whose history begins only in the 50s of the last century. According to a study by the International Aroid Society, the first to grow alocasia amazonica was a humble American postman who owned a small tropical nursery and gave the plant the name he liked. It is difficult to say which parental forms were originally taken by Salvador Mauri for breeding work..

Today, a hybrid of Alocasia longiloba and Alocasia Sanderiana is offered to growers under the name Alocasia Amazonica.

Since the plant with unusual bright leaves immediately showed serious interest in flower growers, many commercial companies have established the cultivation of amazon alocasia as a pot culture. In the 80s of the last century, in the Silver Chrome Gardens nursery, owned by the Rotolante family, a plant was discovered that differed from its relatives in slow growth and significantly smaller plants. Denis Rotolante believed that these properties, together with a polyploid set of genes, alocasia received as a result of a mutation. 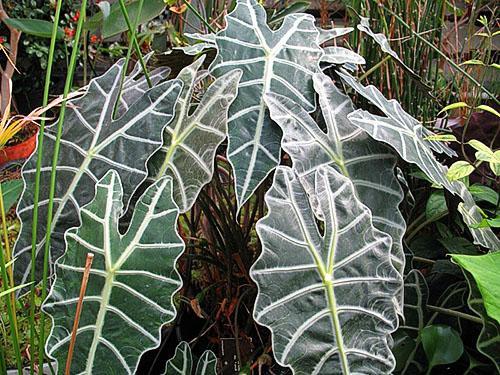 Therefore, a new name for the plant appeared – Alocasia Poly, which was later transformed into Polly. The new plant was very promising from the point of view of indoor floriculture, because it could be easily placed in any room. In addition, caring for alocasia Amazonica Polly at home was seriously simplified..

The dwarf variety of alocasia Amazonica became widespread throughout the world and today is well known to flower growers and under the commercial name alocasia Polly, as well as alocasia Alligator or African mask. 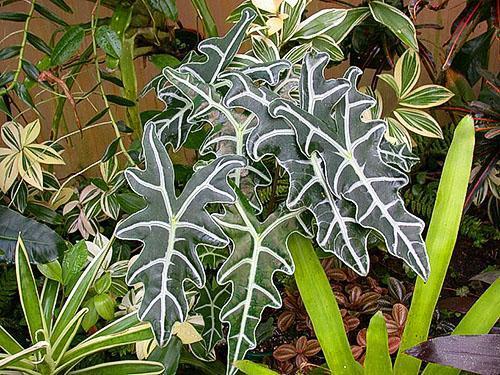 If we compare Alocasia Amazonica with the parental species, both the similarities and differences of these interesting plants are clearly visible. From alocasia Sander, in the photo, the culture inherited the dense fabric of the leaf plate, its rich color and carved edge. 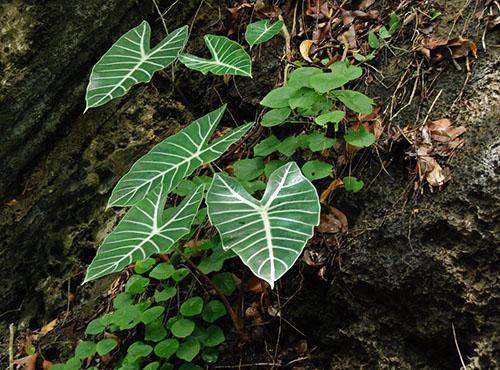 The genes of Alocasia longiloba, in the photo, changed the outlines of the foliage, but at the same time, Alocasia Amazonica, like wild species, can rightfully be called the “elephant’s ear”. The shape of its leathery dark green leaves with contrasting white or pale green veins fully corresponds to this popular name..

With proper care at home, Polly’s alocasia, as in the photo, sometimes blooms. 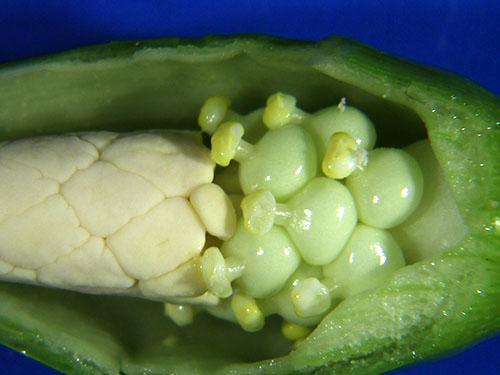 The cob-shaped inflorescence is surrounded by a succulent bracts, which, after fertilization, die off, revealing red or orange berries. Since alocasia Amazonica is a hybrid that does not occur in nature, it is almost impossible to propagate it by seeds. In laboratory conditions and in large nurseries, cloning technologies are used for plant propagation. And at home, you can get a young plant vegetatively..

In height, this type of alocasia can reach one and a half meters, but more often, in an apartment, it does not exceed 50-80 cm. The plant gives a particularly rapid increase in growth with good lighting and sufficient watering.

A descendant of plants naturally found in tropical rainforests, Alocasia Amazonica has the same growing and care requirements as the parent species.. 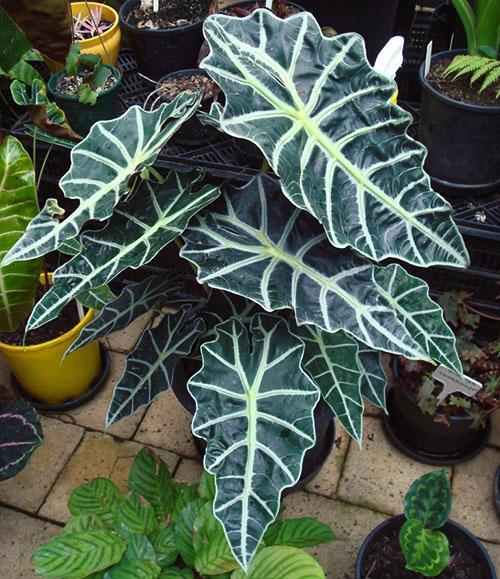 The main criterion of comfort for alocasia Amazonica is a properly selected soil mixture and irrigation regime..

The soil should be very loose, with good oxygen access and moisture permeability. At the same time, water should not linger in the soil for a long time, otherwise stagnation and root rot cannot be avoided. The easiest way, when caring for alocasia Amazonica Polly, at home, mix in equal proportions:

Such soil will contain the necessary nutrients, allowing the plant to actively breathe and develop.. 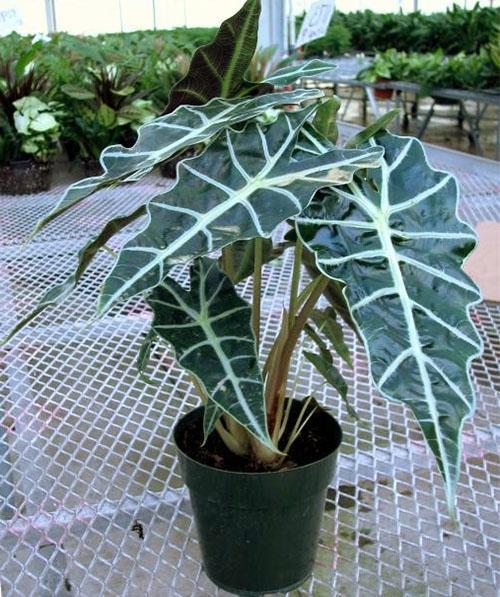 All types of alocasia, including Polly, are very demanding on watering. The soil under the plant should not dry out, but moisture in the earthen coma should not stagnate.

It is best to use settled, boiled or distilled water at room temperature for watering..

At the same time, in the warm season, the green part of the plant is regularly irrigated with warm water, and in the winter time it is limited to wiping the leaf plates with a soft damp cloth. 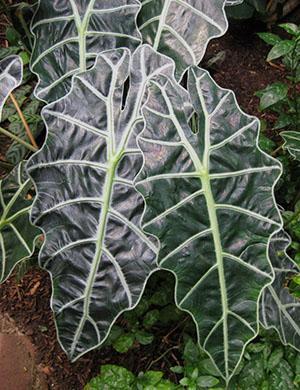 The inclusion of dressings at home in the care of Polly’s alocasia, as in the photo, is just as important as timely watering. During the warmer months, from about April to October, the plants are fertilized monthly with a combination of nitrogen and mineral supplements. During winter dormancy, fertilization is stopped, watering is reduced, monitoring the condition of the foliage and roots.

Like wild alocasia, the hybrid variety needs light, but cannot tolerate direct sunlight. If there is enough light, the plant responds with rapid growth and new foliage formation. When kept in the shade, the leaf plates turn almost black.

The more light falls on the alocasia, the more abundant it should be watered, and the growing specimens must be transferred to larger pots once a year..

Transplanting is best done in the spring, at the beginning of the growing season. The procedure can be combined with dividing the rhizome, depositing the formed children and tubers. 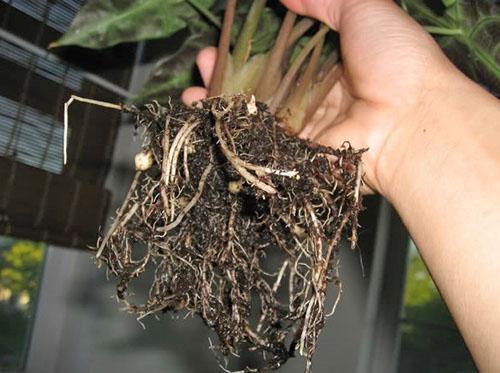 But no matter how high-quality the care of alocasia Amazonica Polly, if at home it is impossible to create a comfortable temperature and humidity regime, the plant withers, and sometimes dies.

Alocasia feels good at temperatures from 16 to 24 ° C, while requiring high, over 65%, air humidity. In this case, a tray filled with pebbles or expanded clay and filled with water will be a good help for a florist. For alocasia, not only dryness is destructive, but drafts, as well as hypothermia. If the plant is transferred to the garden for the summer, a night temperature drop below 13 ° C can cause irreparable damage to the root system or become a signal for the plant that a dormant period has begun..

The first sign of discomfort, such as a lack of light, water, or heat, is wilting and falling leaves..

Growth resumes if Amazonica Polly is properly cared for at home again. 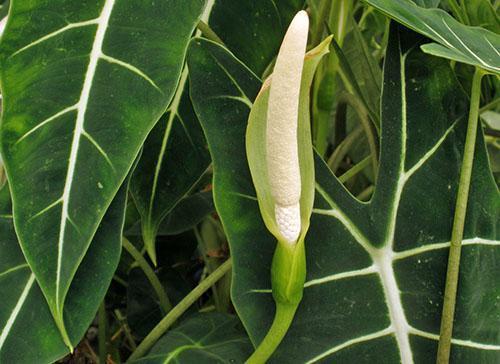 Alocasia bloom becomes a pleasant surprise for the grower. True, the appearance of a peduncle and an inflorescence is a serious test, since the flowers of alocasia Polly, in comparison with other species, are quite large and deplete the specimen that is going to bloom. In order not to lose the entire bush, the peduncles are advised to be cut before the perianth opens or at the beginning of its setting. The cut site is treated with carbon powder and make sure that the damaged tissue does not rot.

And a place for alocasia is found in such a way that foliage containing compounds toxic to warm-blooded creatures is not accessible to children and pets.