Choosing alocasia according to descriptions and photos of varieties 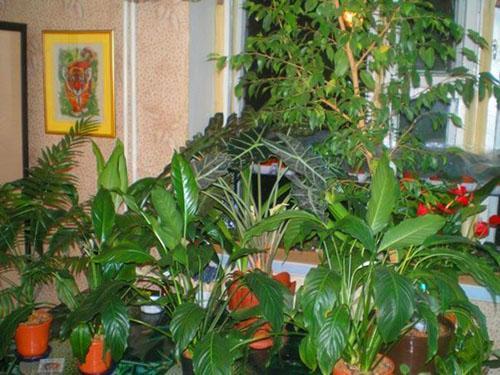 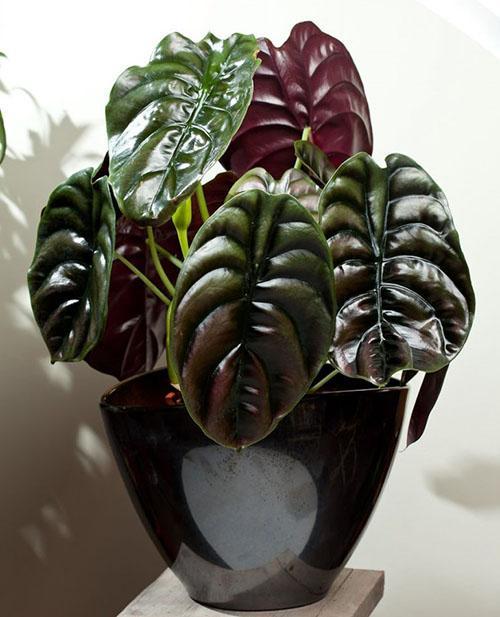 Cultivated as a houseplant, cuprea Red Secret has recently appeared in the collections of flower growers, but thanks to the unusual appearance and texture of oval leaves, it has become one of the most popular varieties..

The size of adult specimens, not exceeding 50 cm, makes it easy to keep a flower in any apartment, and the quilted, purple-silver foliage, as if minted on a sheet of copper, will surely attract attention and decorate the interior.

The leaf plates are dense, leathery. The bottom has a brighter purple tint than the top. Cuttings are erect, but as the leaves grow, they bend in the ground. The leaves of alocasia Red Secret reach 30 cm in length, and even on closer inspection it is difficult to believe that the plant is alive, and not skillfully made from a sheet of copper. 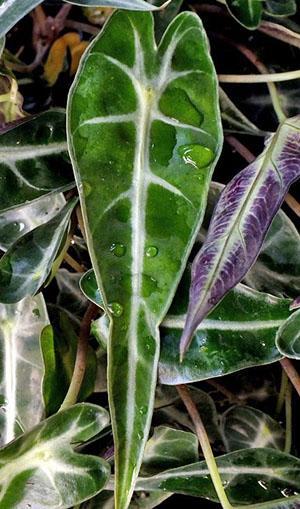 Alocasia Bambino is a miniature and very original plant that behaves well on window sills and flower racks in apartments. The height of the bush reaches 40 cm, which makes the variety of alocasia shown in the photo an ideal crop for confined spaces. Despite its diminutive size, the plant will surely attract attention thanks to its arrow-shaped, dark green foliage with a purple tint. The back of the leaf plates is deep purple, the veins are bright, white or yellowish-green.

Meeting the inscription on the flower pot “Alocasia Cucul Bambino” The grower should not think he is seeing a new variety. In this way, some nurseries designate ordinary plants of the Bambino variety, along with it growing creeping plants of a similar species. 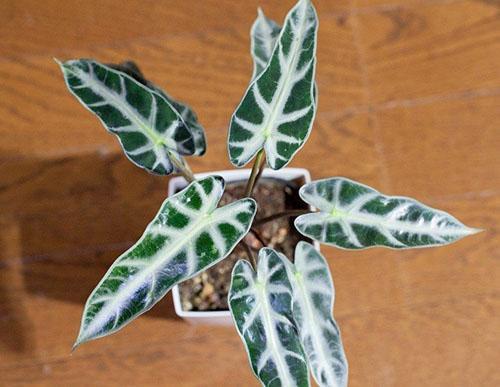 Like the Bambino variety, its sister, the Bambino Arrow alocasia is a vegetable mini-form of the Amazonica alocasia. The varieties have a lot in common. The special charm of this variety of alocasia, shown in the photo, is given by a silvery reflection on glossy dense leaves, which have a complete resemblance to the ancient arrowhead.

The back of the leaves is purple, with white or silvery traces of veins. Best of all, alocasia Bambino Arrow feels in partial shade, despite the apparent resistance to dryness, plants, like all other representatives of the species, are very demanding on the amount of moisture received and atmospheric humidity. 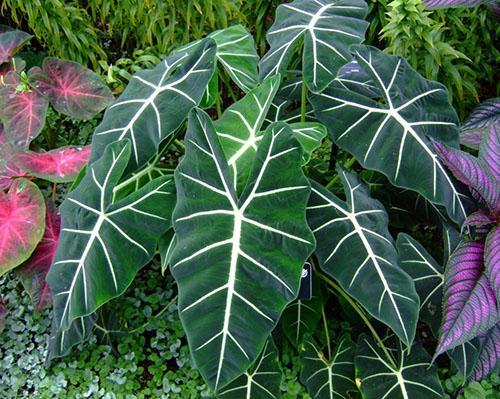 Alocasia micholitziana Frydek is a rather large plant, like many other varieties of alocasia, belonging to the variety of “African masks”. On a green, with an emerald tint, white wide veins are clearly visible on the leaf plate, emphasizing the decorative shape of the leaf plate up to 60 cm long.

According to the description, alocasia in the photo has a good growth rate. Young alocasia grows to the size of an adult plant in 2-3 years. 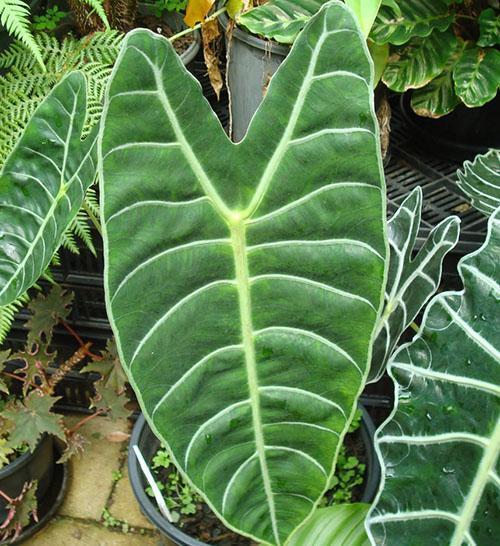 This is the largest variety of the subgroup, the so-called “African Malok”. Variety Grandis alocasia lowii with leaves up to 120 cm long can grow up to one and a half meters in height.

Dark green leaves with a light border and ribbed concave veins of white are very attractive. If you look under the leaf plate, it turns out that on the back side it is purple, like other varieties of the described alocasia. 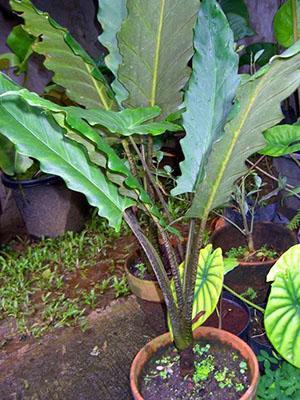 Alocasia lauterbachiana Purple Sword really resembles a bunch of pending combat use of cold weapons. The leaves in the form of jagged oriental swords gave the room alocasia shown in the photo such an unusual name..

The graceful, elongated leaves are painted in a dark green hue and are held on the stem by purple or violet cuttings, sometimes with a bizarre variegated pattern. The resemblance to swords gives the plant a vertical position of foliage, which does not fall to the ground even with an overgrown aerial part. This variety of alocasia, according to the description and photo, is best kept separately from others. In this case, the plant looks the most advantageous. The maximum height of the bush reaches 120 cm. 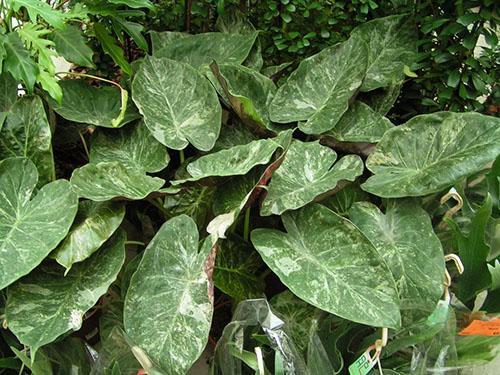 In the conditions of the Alocasia wentii Aline apartment, it feels good at a temperature of 18-22 ° C. This rather large plant attracts attention both for its size and stunning variegated leaves. According to the description and photo, alocasia of this species can grow to a height of one and a half meter, which at home requires the allocation of a fairly large area. 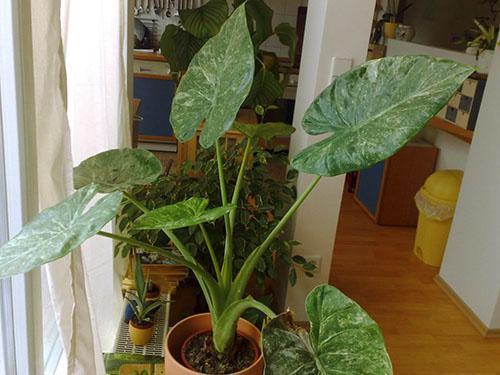 In order for Elaine’s alocasia to look the most advantageous and to be as decorative as possible, the plant is placed in a bright place, yet protected from direct sunlight. Like other varieties of alocasia, sufficient watering is important for this variety. The plant will take away excess moisture through special stomata on leaf plates, which is very reminiscent of the “cry” of a room culture. 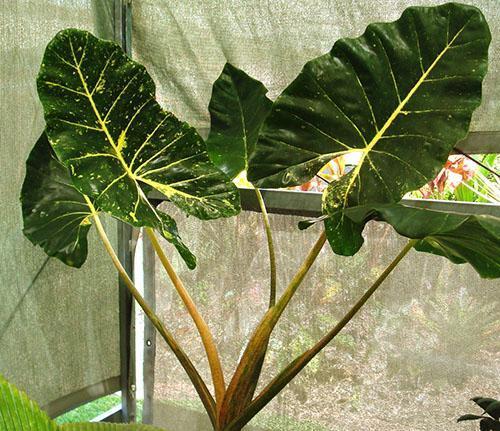 Alocasia large-rooted, Indian or macrorrhiza in nature can reach three meters in height. And although the New Guinea Gold variety is somewhat more compact and does not exceed 1.8 meters in height, the plant enjoys increased attention from both scientific botanists and florists..

The fact is that the variety of alocasia shown in the photo was found in Papua New Guinea and is still a mystery to the scientific world. Scientists cannot explain why and how golden spots appear and disappear on the leaves of the plant. Petra coloration is present on the stems, veins and petioles of this rare variety. But even with green large leaves, Indian alocasia, as in the photo, is always attractive and will become a bright decoration of any spacious room.. 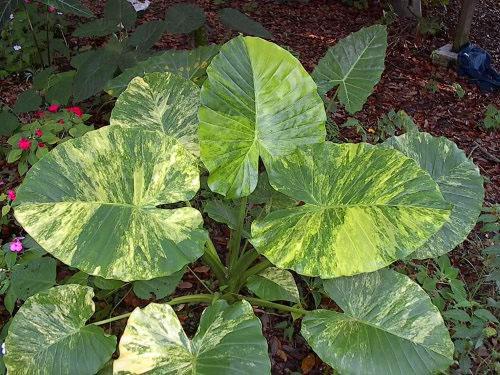 Even more rare is the alocasia odora variegata, one of the largest home-grown alocasia. And this variety, moreover, stands out for its variegated decorative foliage in the form of a huge elephant’s ear.. 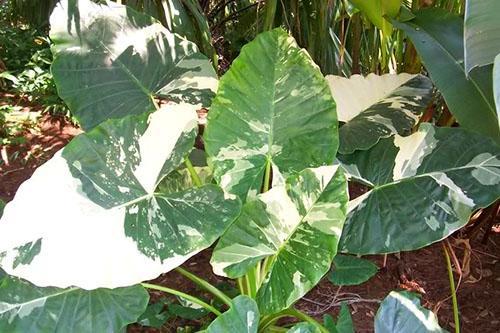 Interestingly, white or light green areas on leaf blades can look like a scattering of small streaks or create large discolored spots. The length of an adult leaf of the variety of alocasia shown in the photo is about 60 cm, the height of an adult plant can reach 2 meters. 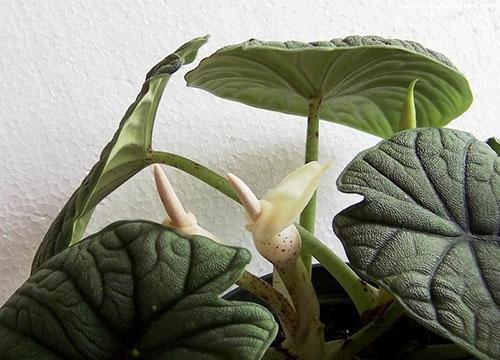 According to the photo and description of alocasia of the Rugoza variety, a plant with a height of only 40–45 cm has a completely unreal, unearthly appearance. It seems to have come from fantastic stories about the flora of distant planets..

Thick leaves of a gray-green hue have a rough, dense surface that feels like plastic to the touch. The veins are pressed into the leaf plate, and their arrangement is tinted with purple or dark gray. Moreover, the older the leaf, the brighter the veins diverging to the edges stand out on it.. 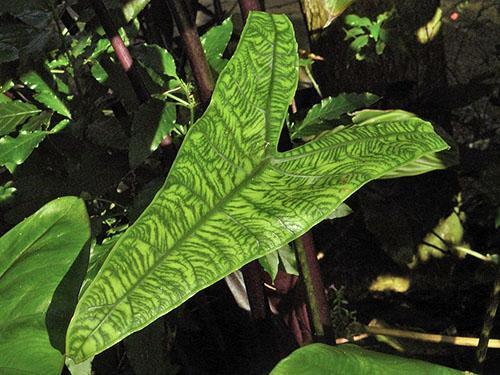 In the photo of alocasia zebrin, all the unusualness of this plant is perfectly conveyed. Thin dark green streaks, reminiscent of a pattern on marble or on the skin of an African animal, are clearly visible on the light background color of the leaf plates. The shape of the leaves, covered with a thin waxy coating, is conical, similar to the outline of a spear or arrowhead. Cuttings of leaves are also variegated, thin, erect. Ornamental leaves grow up to a meter long. According to the description and photo of alocasia, the plant sometimes reaches a height of 180 cm. 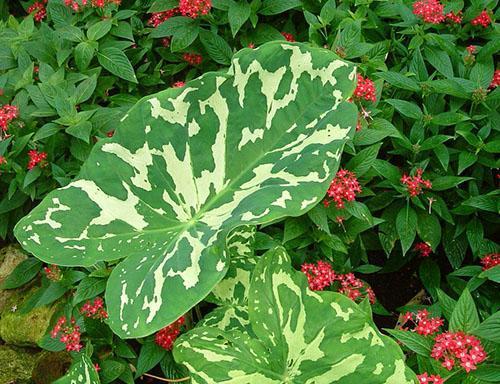 The variegated leaves of this stunning Hilo Beauty alocasia make the plant stand out even from the taller species. The shape of the foliage of this variety of alocasia, as in the photo, most of all resembles a heart. But the value of a plant is not only in the size and shape of the leaves, but also in their color. Each green is generously decorated with light yellow-green spots of irregular shape. Looking at this creation of nature, one can recall military camouflage or the coloring of frogs. The edges of the leaf plates are wavy, the cuttings are erect, strong. 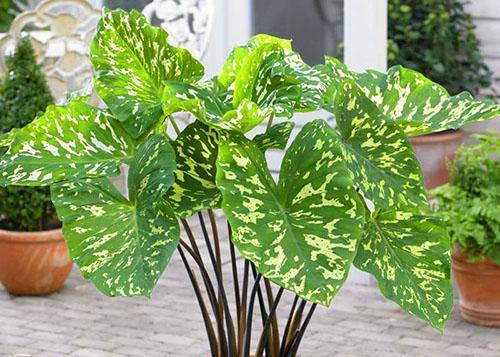 The room alocasia shown in the photo, even in an apartment, can bloom, but the inflorescence, compared to the foliage, is inconspicuous and almost invisible. To maintain its decorative appearance, it is better to grow alocasia Hilo Beauty in a partially lit place, where the plant will not suffer from sunburn, but also will not remain in full shade, where the foliage will gradually turn almost green.

Video about different varieties of alocasia