Photos and descriptions of individual types of aspidistra 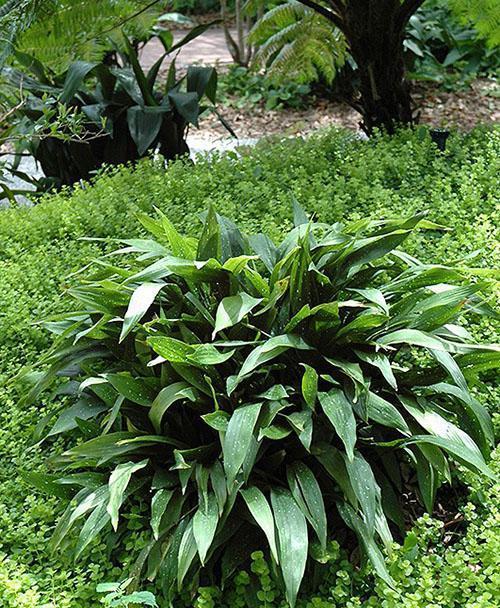 In the circle of indoor plant lovers, aspidistra enjoys the fame of the most hardy and little capricious culture. This inhabitant of the Asian tropics is able to endure without visible losses long periods of drought, drafts and dry air, destructive for other plants, small subzero temperatures and regular waterlogging of the soil..

About a century ago, Europe and America experienced a real boom associated with the popularity of the plant. But of the hundreds of species of aspidistra discovered to date, flower growers both then and now grow only a small part of the varieties of this interesting decorative leafy culture, sometimes pampering the owner with little decorative, but very unusual flowers. 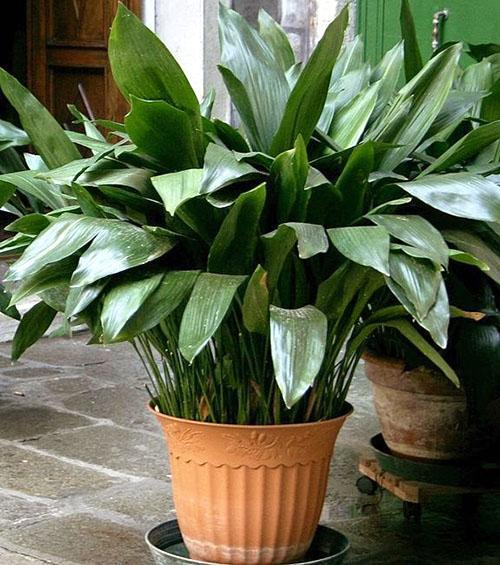 The classification of aspidistra species is still constantly undergoing changes. New varieties are introduced into it, subspecies are combined or divided. But the most studied and famous species of aspidistra is the tall aspidistra or elatior shown in the photo..

Initially, China was considered the homeland of the species, but at the end of the last century, similar wild specimens were found on a number of Japanese islands. The plant was first classified as aspidistra lurida, but today the species are combined. 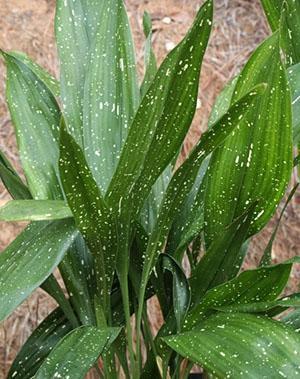 Therefore, the aspidistra elatior shown in the photo is referred to in the literature as tall or broad-leaved.

Indeed, this plant variety has wide leathery leaves that grow directly from the root and rise above the soil level, depending on the variety of aspidistra, by 30-60 centimeters. The underground part of the plant consists of the main rhizome, located directly below the surface of the soil or emerging on its surface, and thin additional roots. The succulent fleshy rhizome of aspidistra has a diameter of 5 to 10 mm, is branched and can occupy a significant area in an adult plant. 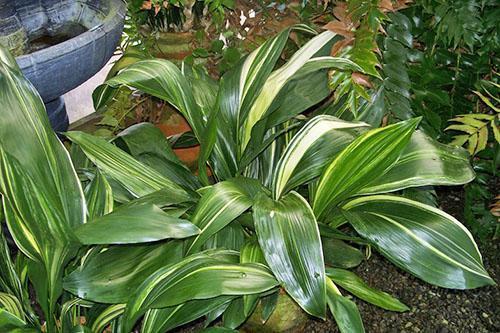 Lanceolate or oblong leaves in some cases reach a length of 50 cm, and their petiole grows up to 35 cm. Leaf width is 6-10 cm.

The sheet plate is hard, saturated green. Today, the variegated aspidistra with striped or spotted foliage, found in nature and actively cultivated, are extremely popular.. 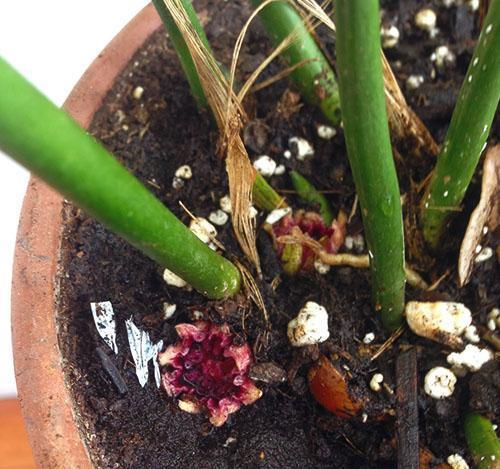 Aspidistra broad-leaved, as in the photo, blooms, forming single brownish-purple flowers up to 2 cm in diameter.The flower can have from 2 to 4 bracts. 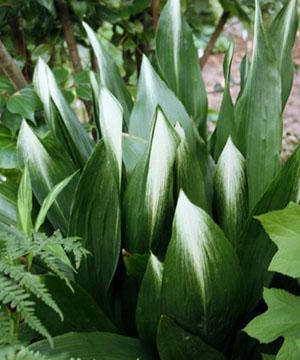 Inside the fleshy dense corolla there are 6 to 8 stamens and a mushroom pistil up to 8 mm in diameter. In nature, aspidistra elatior blooms from January to April, when the rainy season begins in the Asian region. Then, in place of flowers, green or brown-brown, rounded fruits are formed, containing large seeds..

Particularly popular are varieties of variegated aspidistra or Aspidistra variegata with bright white or yellow spots, similar to stars on a dark background of the leaf plate, or with contrasting stripes and brush strokes.

This makes the tall aspidistra so popular and in demand. Breeders offer several dozen varieties of aspidistra, as in the photo, with leaves of different sizes, shapes and colors.

The appearance of Aspidistra attenuata from the mountain forests of Taiwan is very similar to the description of Aspidistra broadleaf. But it was opened a hundred years later, in 1912.. 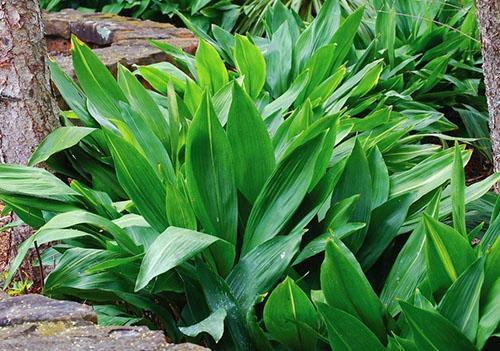 The plant has a creeping, round in cross-section rhizome with a diameter of about 1 cm. Growing up on the loose, drained soil of the forest, this type of aspidistra, as in the photo, forms dense clumps. Dark leaves may be decorated with small light spots. The length of the petioles is 30–40 cm, and the inverse lanceolate leaf blade can be up to half a meter long. The width of the sheet is much smaller and is about 8 cm. 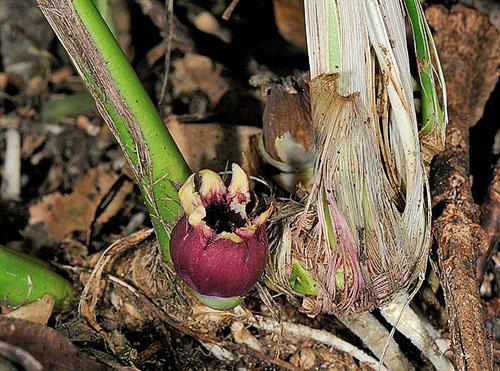 The flowering of wild forms of aspidistra, as in the photo, is not very attractive. The plant forms flowers up to 5 cm in diameter, with 3-5 bracts. The bell-shaped corolla is purple in color, while the petals can be almost white or greenish. Inside the flower there are 7 to 8 stamens and a pistil up to 5 mm in diameter. The flowering of cultivars, especially the variegated aspidistra, is much more interesting and brighter.

The flowering period of this species of aspidistra begins in June, a little later the fruits appear. 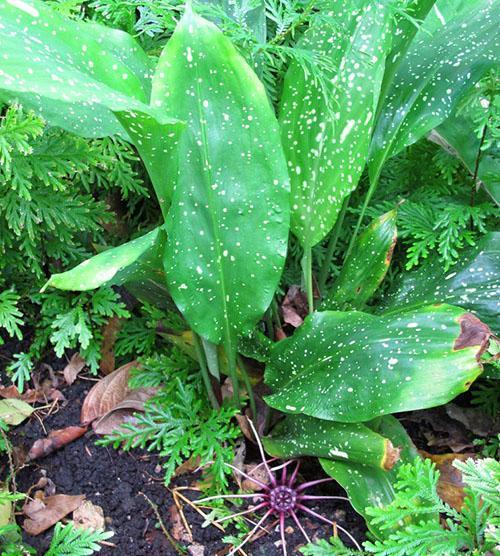 This species of aspidistra was recently discovered in Vietnam, and the plant immediately attracted the attention of lovers of tropical crops. The reason is in single, up to 80 cm long, obovate leaves with contrasting spots on the plate, as well as in the amazing flowering of aspidistra.

In the middle of summer, two or three flower buds appear on the roots of the plant, which turn into flowers with a diameter of 2 to 4 cm. Purple corollas are held on creeping stalks about 5 centimeters long. Each petal has a white elongated appendage with dark purple edges, making the flowering of the species of aspidistra shown in the photo truly unique..

Inside the aspidistra flower, as in the photo, resembling a tropical spider, there are 11 or 12 stamens up to 3 mm long. The disc-shaped pistil is about 3 mm long and up to 5 mm in diameter.

In the wild, flowers appear above ground level in July. At home, flowering is not so regular and largely depends on the care of aspidistra. 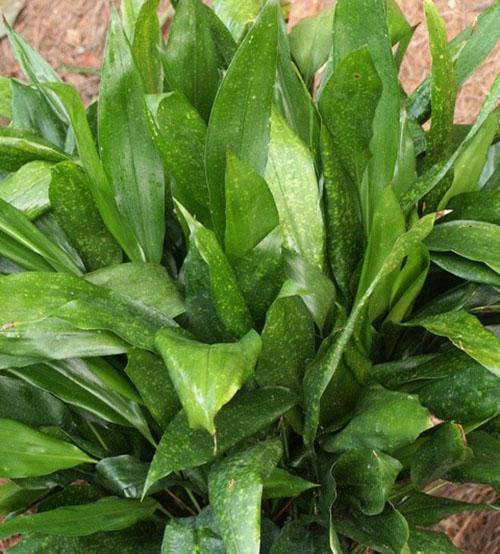 The homeland of this species of aspidistra is the bamboo forests of China, where at a level of 500-1100 meters above sea level, the plant forms densely overgrown glades.

This variety of aspidistra, in the photo, has a powerful creeping rhizome with a diameter of up to 12 mm and single erect leaves up to 70 centimeters high. The leaf plate with arched venation is distinguished by a dense green or spotted color and grows up to 35 centimeters. The width of the lanceolate or elliptical-lanceolate leaf is from 4 to 8 cm.The petiole, depending on the variety, can reach a length of 10 to 40 cm. 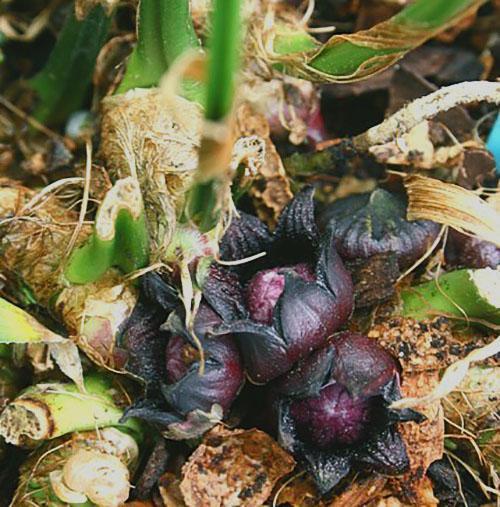 The flowering of the Chinese species of aspidistra occurs from January to March. The flowers are attached to the root with a 5 to 50 mm long stalk. Inside the bell-shaped corolla with six petals there are 6-8 stamens and a large columnar pistil up to 12 mm in diameter.

Compared to aspidistra elatior, the flowers of this variety, as in the photo, are smaller and darker, almost black-purple. 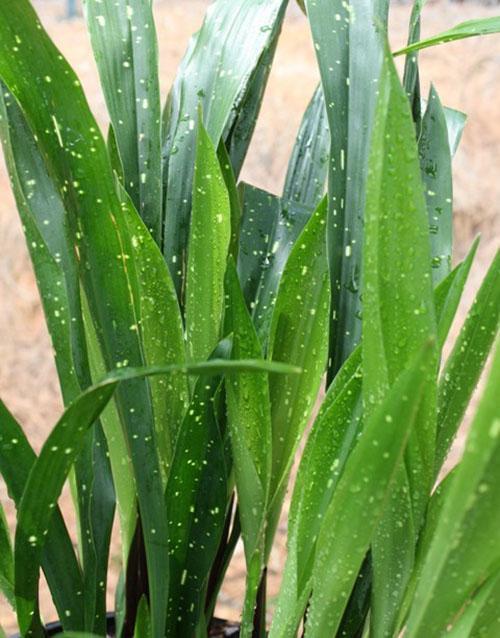 Another species of aspidistra from China also has small flowers, but this is not the only feature of the plant. It has narrow, reverse lanceolate leaves, which are only 2.5–3 cm wide.. 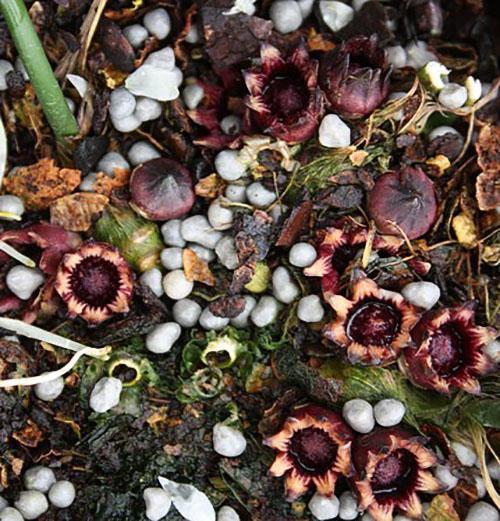 In addition to forms with even green leaves, there are varieties of aspidistra, as in the photo, with spotted yellow-green foliage. 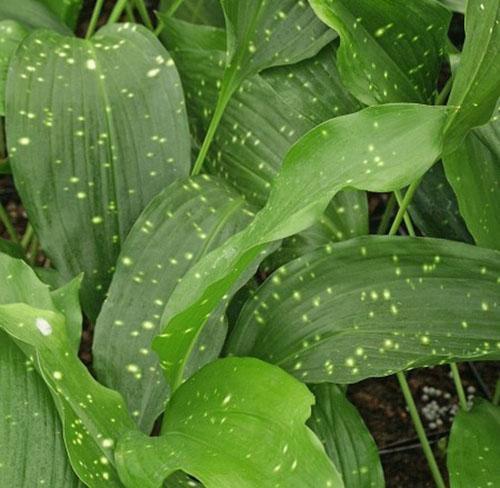 The aspidistra shown in the photo has rather thin, only 5 mm in diameter, scaly rhizomes and single ovoid or elliptical leaves. A 20 cm long leaf plate is held on a long petiole that grows up to 40 cm in length. The leaf itself is not as large as in other species. But on a wide plate, yellowish, chaotically scattered spots are clearly visible, often found on the plants of this native of China.. 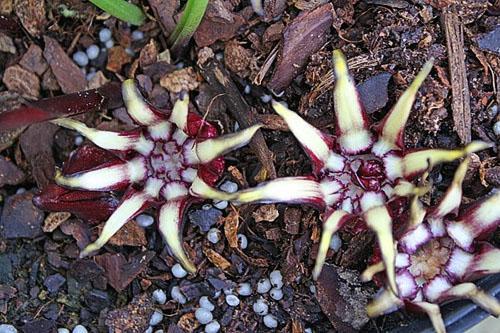 In May, on the ground near the aspidistra, as in the photo, you can see single, rarely paired flowers with a diameter of up to 5 centimeters. Pitcher-shaped purple-violet corollas are attached on petioles about 4-5 cm long, while on all eight petals you can see elongated outgrowths, similar to those of the large-flowered aspidistra.