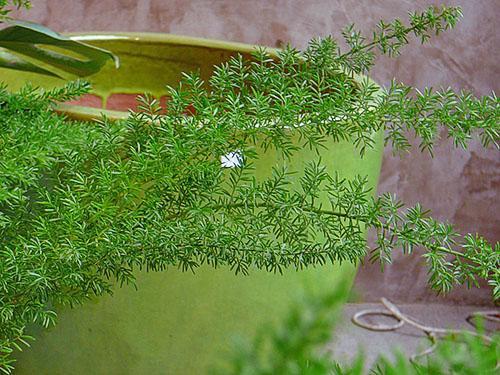 Asparagus or asparagus is a large genus in the family of the same name, Asparagaceae. At the last count, botanists have discovered and described about three hundred species of plants of this genus, and among them there are edible, medicinal, and ornamental varieties. Most of the asparagus species are perennial plants that look like shrubs and semi-shrubs, lianas and ampelous crops.

Under the name “asparagus”, common or pharmaceutical asparagus, which is grown as an early ripening vegetable crop, is widely known in the world. But a much larger number of varieties were cultivated due to the extraordinary openwork foliage. Today, decorative leafy asparagus species are used in landscaping interiors and gardens around the planet..

At home, asparagus have shown themselves to be undemanding plants in terms of care and living conditions, willingly growing and blooming in apartments. There are several most popular indoor types. 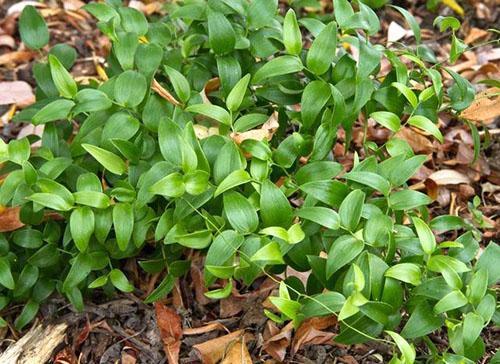 Asparagus asparagus was first described and classified by K. Linnaeus in 1753, but the culture began to belong to the genus of asparagus only in 1909. Indeed, this indigenous inhabitant of southern and eastern Africa does not resemble its more famous relatives.

The graceful asparagus asparagus is a herbaceous vine with stems up to three meters long. Phyloclades, sometimes called leaves, but in fact are the stems of a plant, pointed lanceolate, smooth, shiny. The width of such a “sheet” is 2 cm, the length is twice as large. 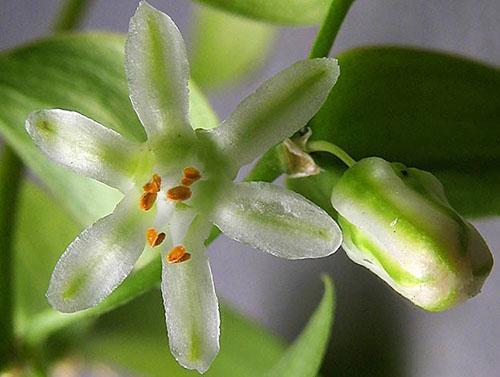 On wild specimens, flowers, as in the photo of asparagus, appear from July to September. They are small with a noticeable aroma. After pollination, in their place, first green, and then red-carmine berries are tied.

This type of asparagus cannot be called winter hardy. But as an ornamental houseplant, it is popular.. 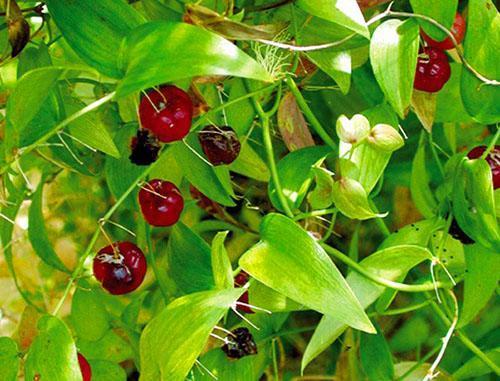 Among flower growers, you can hear another name for the plant – asparagus medioloides, and in the homeland of the culture, as well as in Australia and New Zealand, which has become its second homeland, the vine is called wedding or veil. The reason is that the overgrown plant creates a beautiful openwork canopy, reminiscent of a bride’s veil..

Despite its popularity in Australia, this creeping asparagus species is officially recognized as a serious agricultural hazard.. 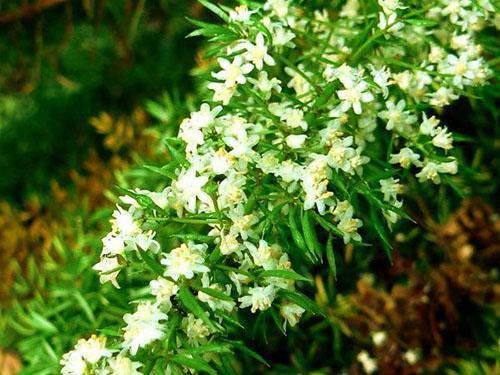 An extremely common and beloved species of asparagus, which is a perennial, evergreen plant, which, depending on the variety and variety, can serve as a ground cover or pot culture. Plants easily tolerate bright sun and, as befits people from South Africa, have small thorns.

Asparagus densiflorus grows in coastal areas and in the province of KwaZulu-Natal in southern Africa. The plant is resistant to drought, undemanding to the composition of the soil, but more readily grows and blooms in moist soil rich in organic matter.

The type of plant varies greatly depending on the cultivar and subspecies. In most plants, the stems reach a meter in length and can be either erect or drooping, like the dense-flowered asparagus Sprenger. It is the most popular of the densiflorus species..

The flowers of dense-flowered asparagus are small, more often white or pale pink. It is one of the most fragrant species of asparagus, and the sweet aroma emanating from the plant is carried far and wide. Flowering is irregular and lasts about two weeks and occurs in the South African summer. 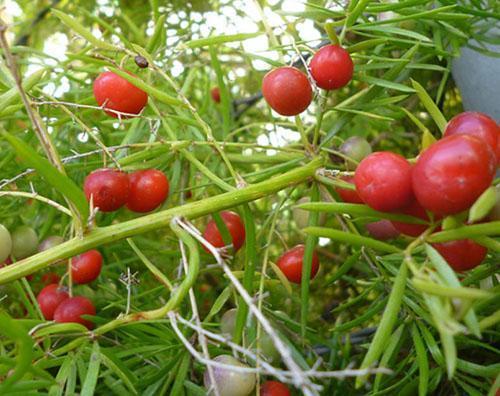 In place of flowers after pollination, spectacular bright red berries appear, as in the photo of asparagus, containing one black seed in ripe form. 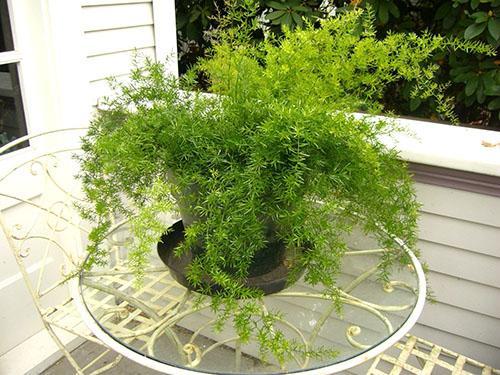 Asparagus dense-flowered Sprenger in the wild and when grown in the garden is a groundcover. In a pot culture, young shoots first keep a vertical shape, then, reaching a length of about a meter, they droop. The plant grows well in the sun, when it gets into the shade, the stems stretch out, and the greens become whiter than sparse.

Phylloclades of this asparagus species do not exceed 2–2.5 cm in length, and their width is only 1–2 mm. The stems are grouped. In spring, white or pinkish flowers appear on asparagus. After that, berries ripening up to 5 mm in diameter are colored orange or scarlet and contain black seeds. The root system is very branched and consists of thin roots and bulbous tubers with which the plant can be propagated.. 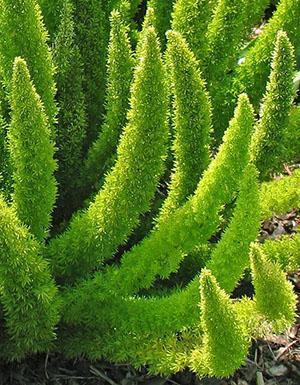 This pictured asparagus looks best when grown in shade or partial shade. The asparagus species densiflorus, cultivar Meyersii, is known by various names, but most commonly the plant is referred to as foxtail fern, asparagus fern, or Meyers asparagus..

The height of this representative of asparagus reaches 60 cm, while the bush consists of long soft stems emanating from a common center. The bush remains compact for a long time and is very decorative and appreciated by florists. Densely pubescent shoots are covered with thin soft needles of a light green hue, which gives the stem the appearance of a cat’s or fox’s tail. The flowers are small, white. Fruits – rounded bright red berries.

In the wild, Meyers’ asparagus can be found in southern Africa and Mozambique. 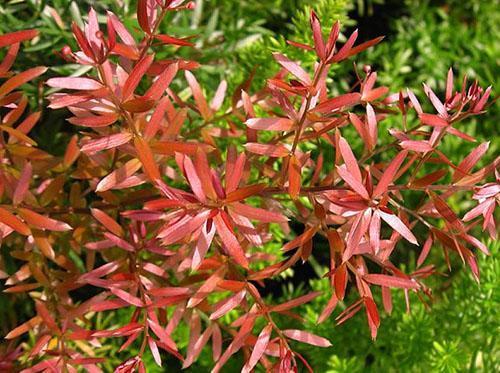 Asparagus densiflorus of the Cwebe variety is a close relative of the described plants, but unlike the dense-flowered Sprenger asparagus, it keeps its vertical shape better, and its young shoots have a unique purple or brownish tint..

This is the only variety for which the sun is contraindicated, and the plant reveals its decorative effect better in light shade.. 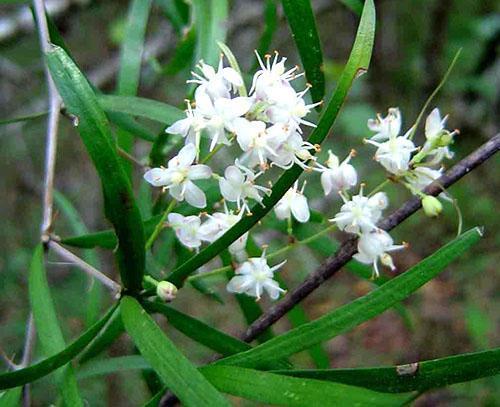 Native to Mozambique and South Africa, the plant is one of the largest asparagus species on the planet. At home, in South Africa, the planting of crescent asparagus is designed to protect the borders of land plots. And this role of the plant is not surprising, because this type of asparagus forms long branched shoots up to 7 meters high. When making a support, young, still grassy shoots entwine it and eventually turn into a solid hedge crowned with thorns.

The leaves of the sickle asparagus, as in the photo, are dark green, thin, curved. The plant blooms, forming racemose inflorescences, combining 5-7 fragrant white flowers. Ripening of berries attracts a lot of birds hunting for black seeds hidden under a red shell. 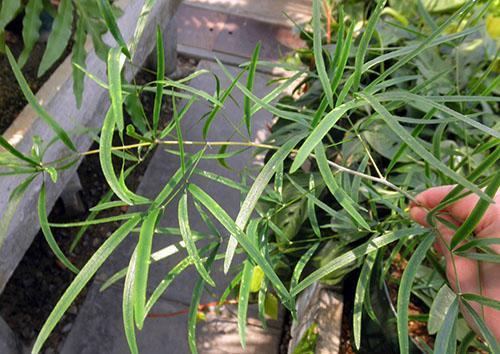 This type of asparagus has a high growth rate and can be grown both in the shade and in the dim sun. The plant is good for watering, reproduces both by seeds and by dividing an adult bush. 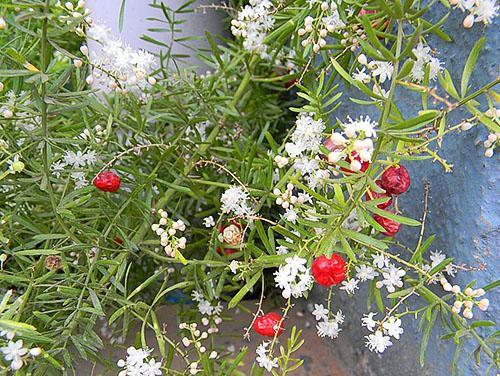 Asparagus racemose or racemosus is native to Nepal, India and Sri Lanka. Here the plant is well known as satavar or shatavari..

The plant reaches a height of one to two meters and in natural conditions prefers to root in soils with a lot of rocks, gravel and large inclusions. In botany, the asparagus species was described in 1799 and has not lost its popularity since then, and even finds new admirers not only as an ornamental plant, but also as a green healer.. 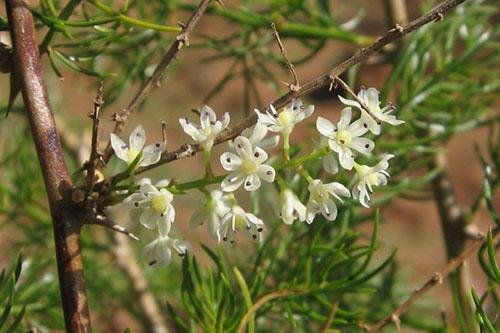 Asparagus cysts are recommended in Ayurveda texts as a means of preventing and treating peptic ulcer and dyspepsia. Modern research has revealed that the asparagus pictured in the photo has the ability to remove toxins and maintain immunity, which fully justifies the popular name “shatawari” or “healer of a hundred diseases”.

The appearance of the shrub is very decorative. This plant is up to two meters high with climbing or drooping shoots with subulate cladodia collected in bunches. Asparagus got its official name due to the pinkish or white flowers collected in a brush with a bright aroma.. 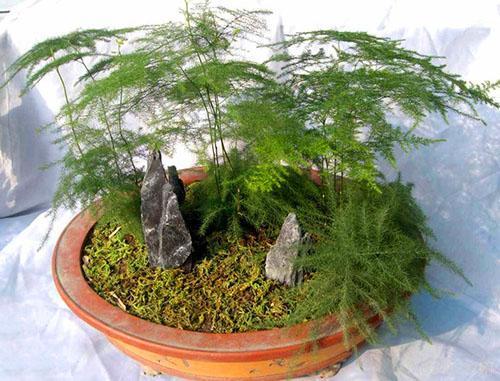 Asparagus pinnate is native to South Africa, but the plant turned out to be so unpretentious that it easily acclimatized in other parts of the world. The name of this asparagus comes from the Latin Saeta, which means “hair” or “bristles”. Therefore, the species is sometimes called the finest asparagus or bristly. Another version of the name, A. plumosus or pinnate, obtained by the plant back in 1875, is considered obsolete.

The plant is a climbing shrub with bare, strongly branching stems emanating from a common center of growth. The areas of the stem, called leaves, are indeed the thinnest of all the varieties studied. The bundle contains 3–12 phylloclades, up to 15 mm long and up to 0.5 mm in diameter. 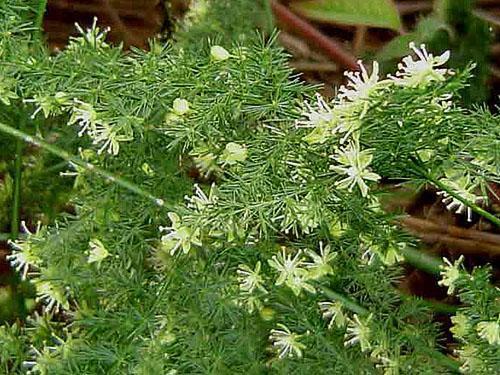 The flowering of the asparagus shown in the photo consists of the appearance of many small white flowers. The fruits, unlike other described asparagus species, are not red, but blue-black, containing from 1 to 3 seeds.