Photos and descriptions of the types of alocasia 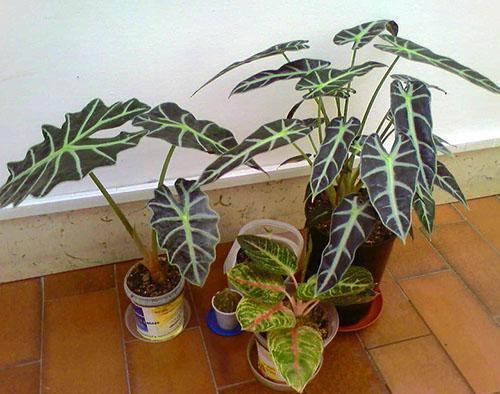 The region of natural habitat of alocasia extends to the tropical regions of southeast Asia, New Guinea, parts of the Australian continent and Malaysia. Today, botanists talk about the existence of more than seventy independent and in their own way unique species of alocasia.

All plants bearing a common generic name are herbaceous perennials with a tuber-like rhizome, a juicy strong stem and leaves of various shapes and colors. And although all types of alocasia bloom, forming single inflorescences, cobs, it is thanks to the foliage of alocasia that attracted the attention of indoor crop lovers. Today, both miniature and truly giant plants have found their place in the interiors of residential and public buildings. And in regions where the climate permits, alocasia are a magnificent decoration of gardens and parks. From them you can create wonderful compositions in flower beds.. 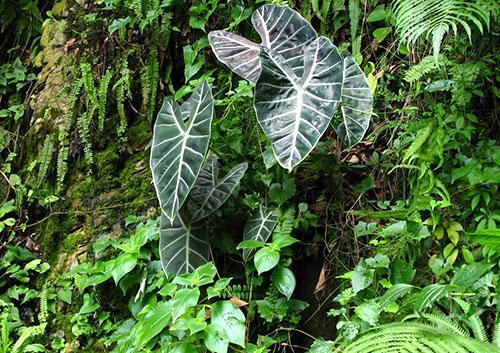 This Alocasia species pictured lives in the shady undergrowth of the humid tropical jungle. Plants in height do not exceed 50-100 cm, and in nature they are content with rocky slopes with a small layer of soil.

The aerial part of alocasia consists of creeping stems and large, arrow-shaped leaves. The upper side of the leaf plate, up to 30–45 cm long, is green with a blue or bluish tinge. The back is purple or violet-green. against such a background, powerful silvery-gray or whitish veins stand out well. The drooping leaves of alocasia Lowe or longiloba, as this species is called today, holding on to understanding cylindrical petioles, have a sagittal-spear-shaped shape..

Petioles of alocasia lowii are colored brown or green, with a darker brown pattern in the form of streaks and stripes clearly visible on them. 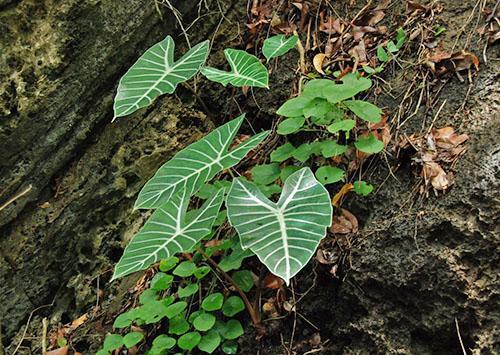 Inflorescences of Low’s alocasia can be either single or multiple. On a peduncle 8 to 18 cm long, cobs are formed, wrapped in greenish bedspreads. After pollination, almost spherical dark orange berries with a diameter of up to 8 mm ripen at the inflorescence site. 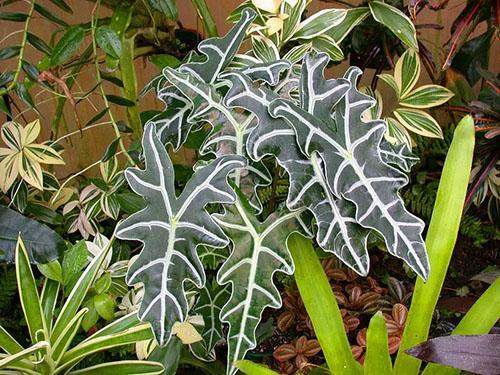 The Sander alocasia shown in the photo in size and many external features resembles the previous view, but the leaves 30–40 cm long are not just arrow-shaped, but are additionally decorated with bizarre jags. Therefore, the foliage is more reminiscent of an ancient spear or halberd..

A plant with dense, metallic leaves, on which white veins and such a edging along the edge stand out brightly, is popular with flower growers. Alocasia Sandera, once found in the highlands of the Philippines, is today a room crop and inspires breeders to develop interesting interspecific hybrids.. 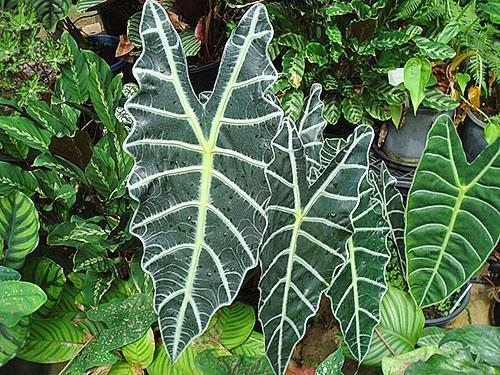 An example of such breeding work can be considered the Amazonian alocasia, obtained from the crossing of Lowe’s alocasia and Sander’s alocasia. The plant has absorbed all the best features of the parent species. It is compact, decorative and in height, depending on the variety, can reach from 40 to 60 cm.

Elongated with a sharp end and notched edge, dense leaves of alocasia Amazonica grow up to 50 centimeters in length. On the dark leaf plate, as in the parental species, wide, white or greenish veins are clearly visible.

The flowering of the alocasia shown in the photo consists in the appearance of a 20-cm erect peduncle, on which a white or pinkish cob is formed, 8 to 10 cm long.The inflorescence is covered with a large greenish blanket, twice the size of the cob. 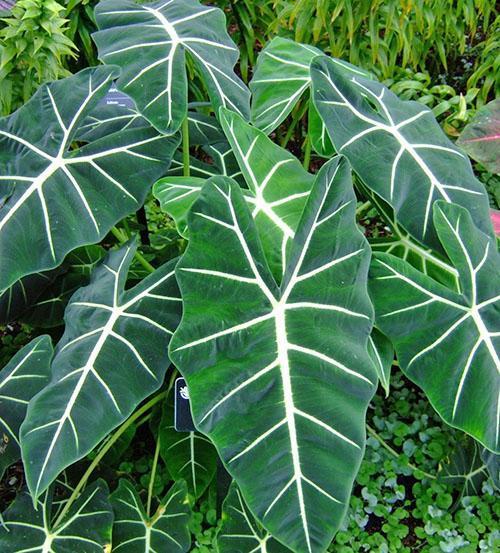 This alocasia has a height of 40-50 cm and fits very well into any interior. The leaves of alocasia Misholc also have many generic features with the previous species. It is 50 centimeters long, rich in color, and a spear-shaped triangular shape. The leaf plates of the type of alocasia shown in the photo have an interesting velvety green color and bright white veins. True, there is no edging along the edge in this case.

The petioles on which the leaves are attached are erect or slightly inclined, brown-green in color with reddish or brown stripes. Alocasia micholitziana is a native of the tropical regions of the Philippines, which explains the similarity of the described species. 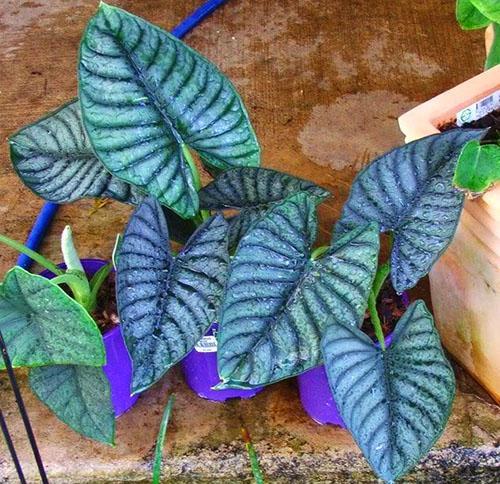 Alocasia foggy also belongs to the indoor species of this amazing plant. The largest specimens of the type of alocasia shown in the photo will grow to 70 centimeters in height.

The shape of the leaves of this plant is more rounded, soft. And the pattern on the silvery-green leaf plate is noticeably blurred. Dark lilac or gray streaks seem to be hidden by fog. The length of the leaf can reach 45-50 cm. The width is half as much. 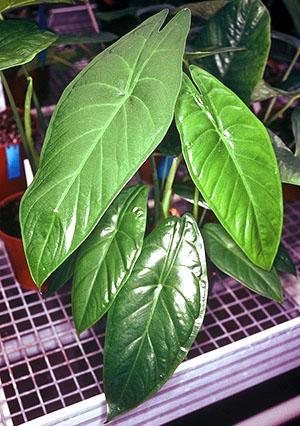 The height of another type of alocasia, grown as a houseplant, reaches 75 cm.In this variety, the stem lodging as the plant grows is up to 75 cm long and oval-spear-shaped green leaves, depending on the size of the alocasia, growing from 18 to 60 cm.

At home, as in nature, alocasia regularly blooms, forming small inflorescences up to 10 cm long, hidden by a dense light green perianth. If the peduncle is not cut and the plant is fed, you can get medium-sized orange berries containing seeds suitable for propagation..

Photos of alocasia zebrin invariably cause surprise and delight of flower growers. Narrow triangular leaf plates of this type have an arrow-shaped shape and an unusual color. On a light green or olive background, not only dark veins stand out, but also bizarre patterns radiating to the edges of the leaf. The length of the leaves is 30–40 cm. The petioles, like the foliage, are variegated, erect, up to 50 cm high. 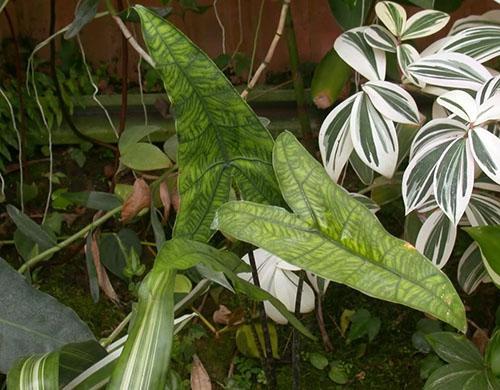 In nature, this type of alocasia can be found in the mountain forests of the Philippines, and more and more often alocasia zebrin plants become a decoration of houses and apartments.. 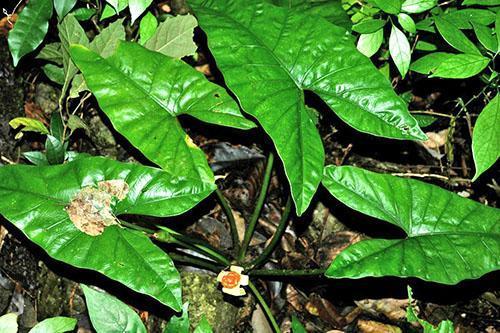 This type of alocasia up to 60 cm high, shown in the photo, has an undeniable resemblance to alocasia zebrin.With similar dimensions and foliage shape, the plant is devoid of a unique pattern and is painted in a beautiful bright green color. 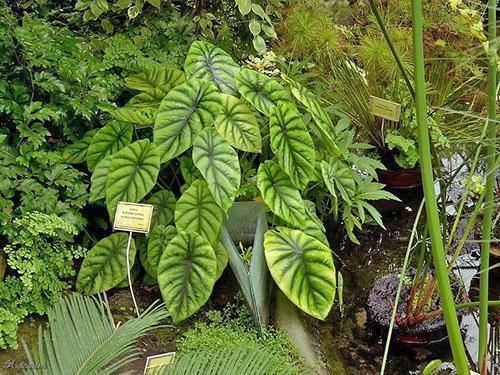 Another inhabitant of the Philippine tropics, alocasia clypeolata, has oval-heart-shaped leaves that are shaped like an ancient shield. The leaf plates are rather thin, light green. Against this background, dark streaks are clearly visible. Petioles are erect or in the lower tiers, lodging, long. 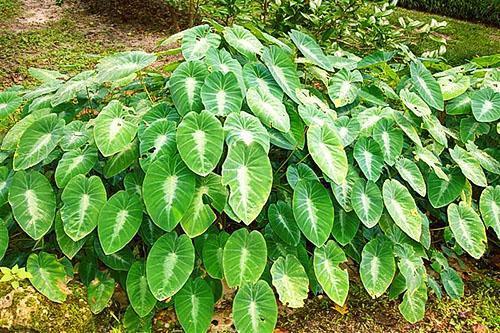 A continental Asian species of alocasia, found in rooms and halls from the subtropics of the Himalayas, botanists are considered a possible ancestor of the famous alocasia odora. The height of this large plant can reach 2.5 meters. When the leaf is cut, a whitish milky sap is released. Petioles are dense, thick, up to one and a half meters long.

The leaf blade resembles many types of alocasia. It is rounded oval, with a pointed tip. The length of an adult leaf can reach 130 centimeters. Peduncles are formed in the leaf axils, and at the same time, 2-3 inflorescences can bloom on the plant. 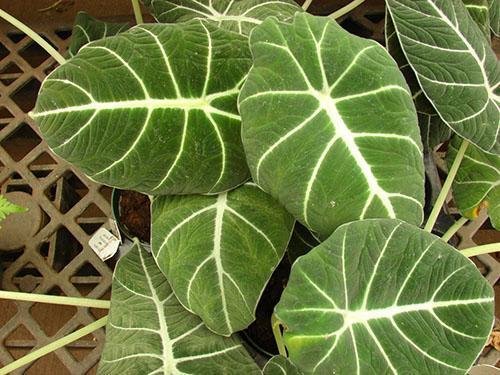 Small and very attractive alocasia reginula is well known to flower growers in the Even Velvet variety. The stems of this species are very small and barely exceed 10 cm. They have light cylindrical petioles with 30-cm ovoid or oval leaves. The leaf blade is dense, often convex, with a pointed tip and noticeable white veins. Plants sometimes bloom, producing a short, 10-centimeter (6-inch) peduncle with a cream-cob tucked into a white or pinkish perianth. 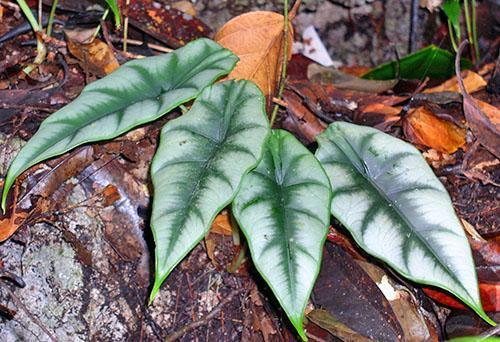 Alocasia species that is attracting more and more attention of tropical plant lovers. The reason for this interest lies in the very small size and extraordinary appearance of the culture. The arrow-shaped silvery-green leaves very closely mimic the arrowhead. At the same time, dark veins diverging to the edges give a special charm to the plates.. 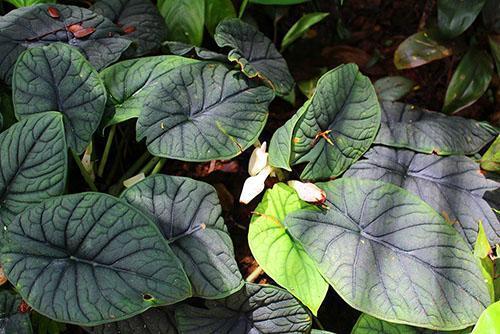 Low plants of coarse alocasia have thick creeping stems and heart-shaped leaves. Most of all, the flat thick leaves of a gray-green hue resemble the skin of an ancient animal or a plastic product. The surface of the sheet plate is uneven, small tuberous. The veins are depressed, darkened. Young foliage is lighter than adult and much softer to the touch.. 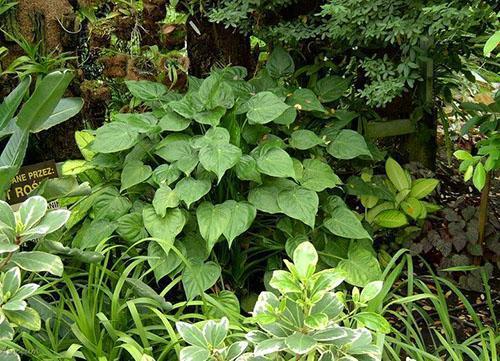 The stems of alocasia klobuchkovaya, as in the photo, grow up to 60-100 centimeters in height. The leaves are pointed, cordate. Their length, depending on the variety, can reach 10–40 cm. The petioles are juicy, tapering upwards, up to 80 cm long.

Alocasia cucullata is home to the tropical rainforests of Burma and West Bengal, where plants can be found under cover of taller species as well as on the outskirts of wooded areas. 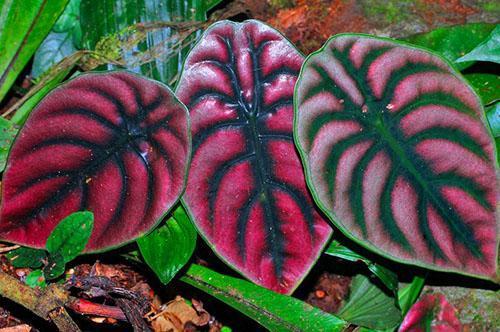 One of the most unusual types of vlocasia is rightfully considered copper alocasia, as in the photo, striking the imagination of the grower with the look and texture of bright foliage.

The leaves of alocasia cuprea have a beautiful pointed shield shape. The leaf plates are dense, leathery. The length of the leaf is 25–30 cm. The outer side of the glossy plate has a greenish copper tint. And on the back, the purple tones thicken to a purple or lilac hue. Veins on leaves depressed, dark. 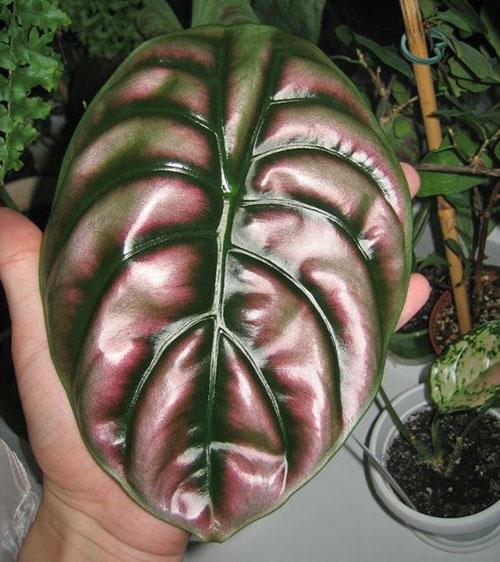 In the wild, copper-red alocasia is still found today in Borneo, where the plants settle mainly on chalk cliffs overgrown with tropical forests. Among lovers of indoor alocasia, the variety “Dragon Skin” is well known, which fully carries all the specific features.. 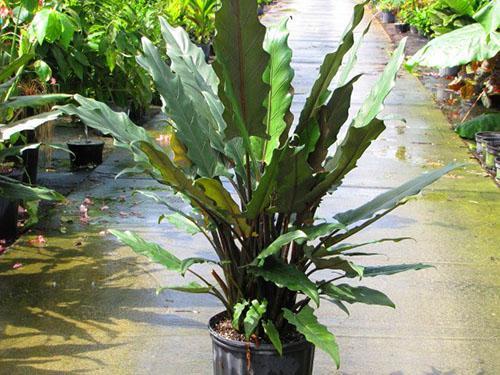 The type of alocasia shown in the photo is characterized by strongly elongated notched leaves, holding on to variegated erect petioles. Interestingly, until recently, botanists attributed alocasia lauterbachiana, which attracted flower growers, to a different genus of plants. And by joining the large community of alocasia, it immediately became a popular indoor culture..

The plant has a height of 80 to 130 cm, long dark green leaves, with a pronounced burgundy tint on the back. Purple and petioles of leaves, as well as peduncles holding large single inflorescences.