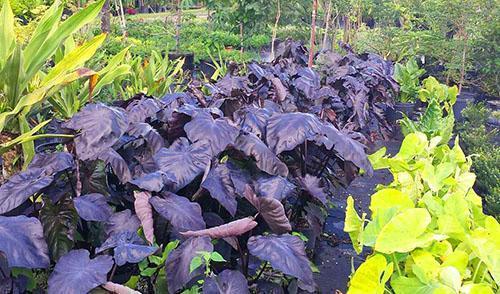 The flora of tropical rainforests is so rich and diverse that it still gives botanists both surprises and reasons for serious scientific discoveries. The genus of alocasia includes several dozen species, the exact number of which is difficult to name even by a specialist in tropical flora..

And the point is not only in the inaccessibility of the islands of Oceania or in the dense jungle, hiding not yet studied specimens. The nature of the region is incredibly generous and creates all the conditions for natural hybridization and the emergence of new varieties of alocasia. 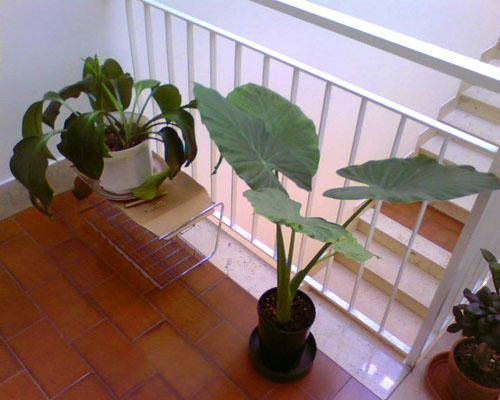 In addition, plants that find their way to Europe, the USA, Russia and other countries invariably arouse the interest of flower growers who bring out new, previously unseen varieties and hybrids. Today, indoor plant lovers have at their disposal specimens with green, variegated and even purple foliage in the shape of a trefoil, like the alocasia in the photo. Look at the photo of the saxifrage! 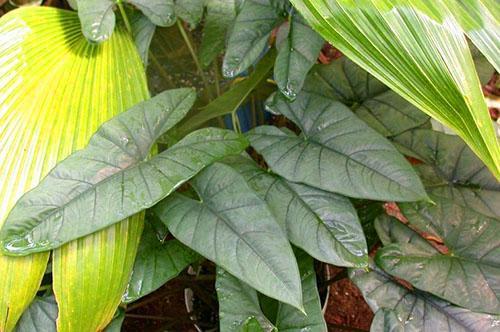 From the humid tropics and subtropics of southern Asia and Australia, a spectacular, but very small indoor alocasia, as in the photo, does not exceed 40–55 cm in height, came to Europe. The variety was bred as a result of painstaking selection work, and several wild species became parental forms..

The leaves, the main treasure of Corazon alocasia, are smooth, green, with a grayish metallic sheen. Against the background of a rather light leaf plate, dark veins are clearly visible. The length of the leaf of this variety of alocasia, as in the photo, reaches 20 cm, the width of the plate is half as much.

Alocasia Corazon is very attractive, but to show its best features, it requires bright but not direct light, abundant watering and careful maintenance, especially aimed at controlling pests. The culture can infect spider mites, which quickly colonize cuttings and the back of the leaves..

Unfortunately, today this variety is rarely found on window sills. although it is no less interesting than well-known varieties such as alocasia Black Corduroy or hybrid alocasia amazonica polly. 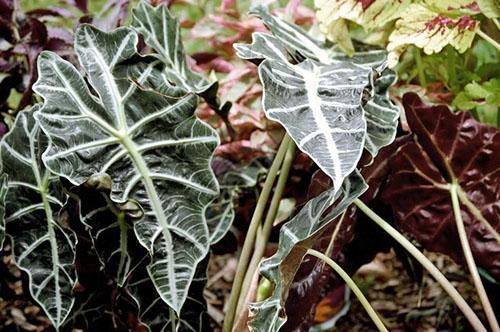 The Polly alocasia shown in the photo is the smallest representative of plants, thanks to the shape of the leaves, which have earned the name “African mask”. The height of an adult plant does not exceed 50–65 cm, which makes it possible to find a place for culture even in a small room. The only condition for good growth is an abundance of moisture, light and heat. With proper care, Alokazia Amazonica Polly is grown as a perennial crop, and this variety is easier to tolerate than the rest of the lack of lighting, which is inevitable in the autumn-winter period..

The dark, pointed foliage with contrasting veins can be compared with the shield of an ancient warrior or, as in the photo of alocasia, with a shamrock.

By its nature, Polly alocasia is a dwarf variety of Amazonica alocasia, obtained through the crossing of wild plants in the middle of the last century. The very same Polly alocasia shown in the photo was first grown only two decades ago and in such a short time won the love of flower growers all over the world.. 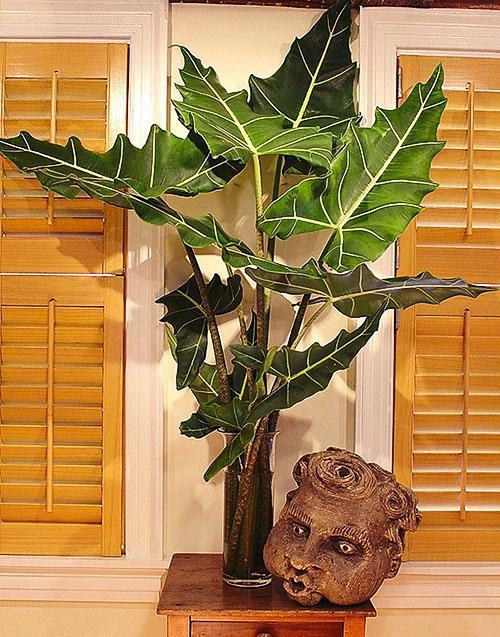 The foliage of Alocasia Sarian is very similar to the previous plant. But if you look at the photo of alocasia varieties, it becomes clear that alocasia Saryan, compared to Polly, is a real giant.

The plant has large, dense leaves with a cut curly edge and a sharp tip. White veins stand out brightly against a rich green background. The leaf plate is smooth, with a characteristic gloss. 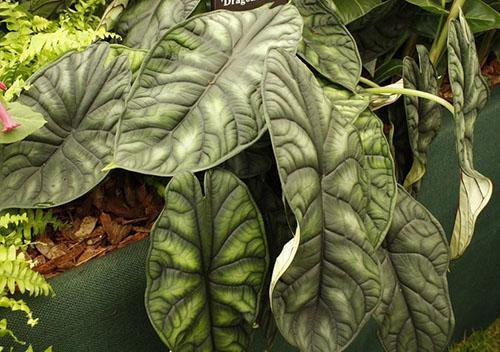 Alocasia variety, popular among flower growers, Dragon skin, as in the photo, attracts attention with the unusual texture of the foliage, which really resembles the scales or leathery wings of a fabulous monster.

The height of the plant is small and does not exceed 0.6–1 meters. The native land of the wild-growing ancestor of alocasia Dragon is the tropics of Indonesia, where copper alocasia has mastered the wet undergrowth. In apartments for the plant, it is also necessary to create suitable conditions, consisting of abundant but dim light, regular watering and good nutrition. With proper care, as in the photo, Dragon scale alocasia will delight the grower for a long time.

The main decoration of the flower is the extremely large and beautiful foliage, which makes the plant unforgettable and gives it an exotic look. Alocasia rhizomes are elongated, juicy. The leaf stalks are light green, bending under the weight of the leaf plates, which eventually leads to the formation of a real “dragon skin”. 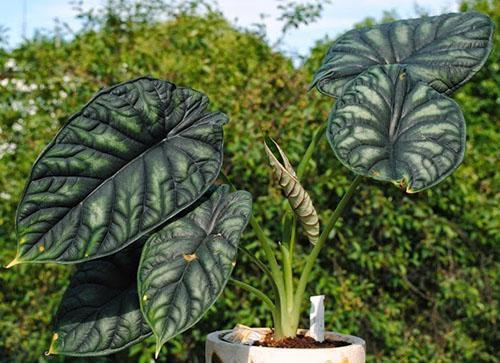 Young foliage is often green, but as it grows, as in the photo of alocasia Dragon, darker and silvery tones appear on it, giving the leaves of the plant a leathery look. It is an ideal plant for distinctive stylish interiors and conservatories. In order for alocasia to retain its attractiveness for a long time, it is protected from bright light that can burn decorative foliage.. 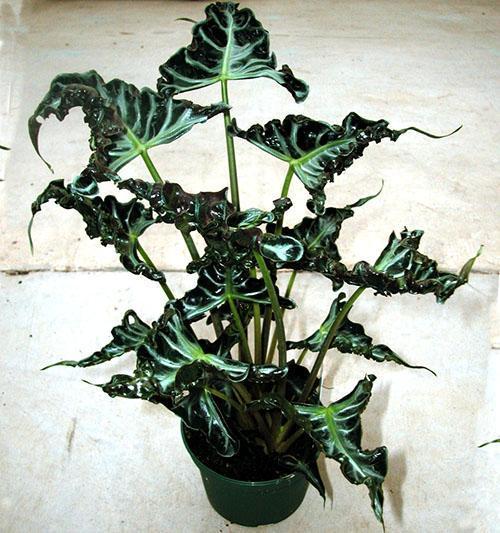 A photo of this room alocasia invariably causes surprise and delight for lovers of home floriculture. Medium-sized, with a glossy shine and a very sharp tip, the foliage of this variety of alocasia, as in the photo, has the shape of a pronounced trefoil, and it leaves the feeling that it is made of metal or plastic. Such an amazing plant will be a great addition to tangerines, ficuses and other flowers growing at home.. 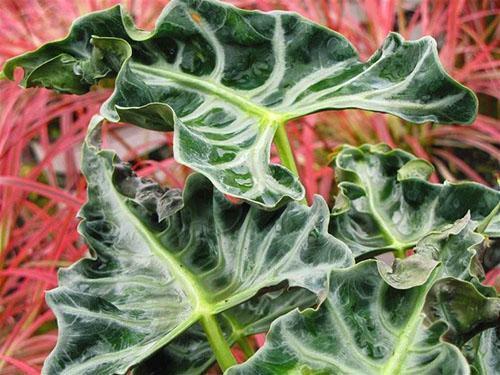 The veins on the leaf plates are white, with a blurred outline. The back of the leaves has a purple or purple hue. The edge of the leaf blade is not only figuratively cut, but also corrugated, which only adds decorativeness to the unusual culture. A plant up to 50 cm high worthy of being in the collection of a florist who is passionate about tropical species! 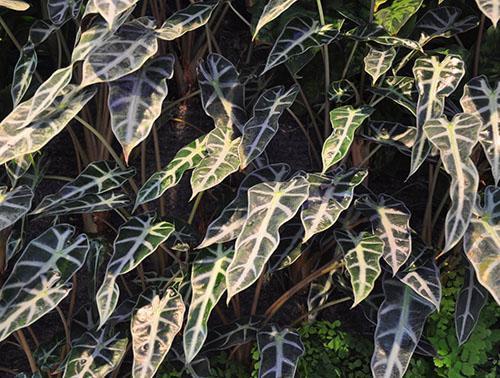 Small alocasia Bambino Arrow is a variety of the Amazonica hybrid species, which is well known to flower growers. Plants with sharp arrow-shaped leaves in indoor conditions can grow up to 40-60 cm, some dwarf varieties are limited in development at the level of 30-40 cm.

Indoor alocasia, as in the photo, in the summer months, the variety is grown at temperatures between 22 and 25 ° C. In winter, when a perennial evergreen plant requires relative rest, cooling the air to 18–20 ° C will not harm alocasia.. 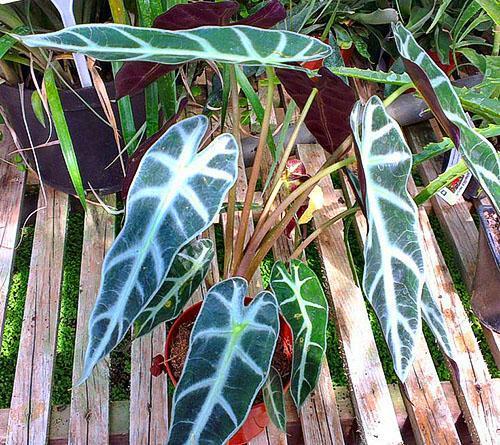 The leaves of this variety of alocasia, as in the photo, have a dark color, on which wide white veins look spectacular. Petioles of leaves are erect.

Alocasia Bambino Arrow requires well-drained soil, adequate nutrition, and abundant watering for good growth and development. The plant is transplanted after a year. The procedure is best done in the spring, at the beginning of the growing season.. 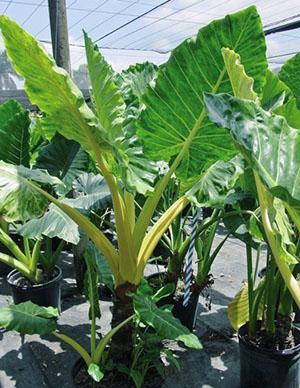 The name of the variety of alocasia Lutea shown in the photo is translated from Latin as “yellow”, which fully reflects the main feature of the plant. Succulent thick cuttings of leaves, parts of the stem and even veins on the leaves have a clear yellow tint. This gives the large alocasia additional attractiveness and distinguishes it from similar species and varieties..

The plant has large, wavy leaves of a bright green color. The leaf plate of a native of the forests of New Guinea reaches 60 cm in length, and the alocasia itself grows up to one and a half meters. Such sizes and shape of foliage fully justify the popular name of this type of plant – elephant ears.. 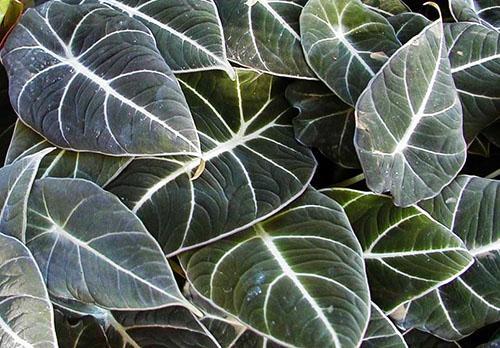 The velvety leaves of alocasia Black Velvet, at the first glance at the plant, amaze everyone who is fond of indoor floriculture. The upper side of the leaf plate of this variety is distinguished not only by an unusual texture for alocasia, but also by a rich, almost black shade, which gave the plant its name.

Thick white veins are perfectly visible against the velvet background. The stems are also light, erect or slightly sloping. In indoor conditions, alocasia grows up to 30-45 cm in height, which makes the culture very attractive for most flower growers. 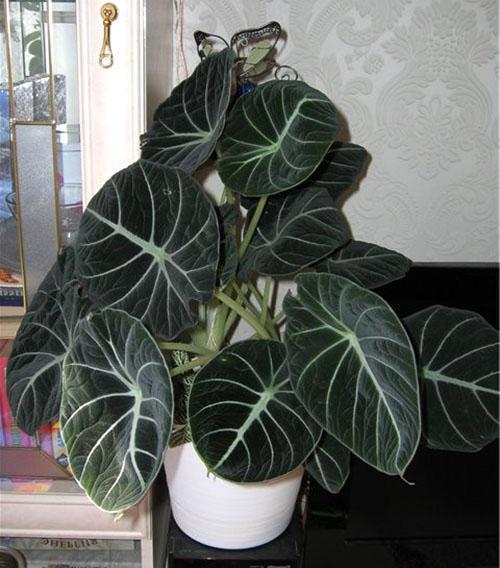 This exotic plant can become a unique interior decoration and create a corner of tropical Asia and Oceania in a city apartment..

True, at the same time, Black Velvet alocasia, as in the photo, requires the same conditions that surrounded him at home. This means that humidity and air temperature are important to the plant. For the health and good appearance of alocasia, nutritious loose soil and abundant regular watering are needed. With a careless attitude to care, alocasia quickly loses its attractiveness, its oval large leaves lose their velvety, become thinner and become covered with painful spots.

In the pictured Alocasia Black Velvet, the leaves below are pink or purple in color with an unusual green tint. In culture, in addition to plants with ordinary rounded oval leaves, varieties with elongated leaf platinum can be found. Usually these plants are larger and have a moderate growth rate.. 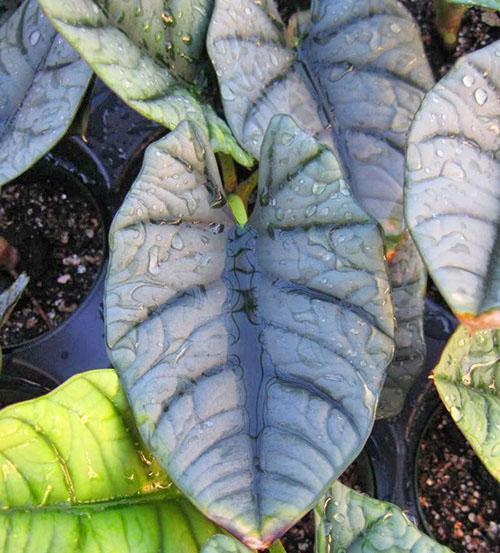 The cultivar Alocasia nebula Elaine is well known to flower growers due to the unusual tough leaves of the plant, which have not only curly outlines and concave veins, but also an amazing metallic shade. Veins are blue or purple, the back of the leaf is purple.

The steel-gray leaves characteristic of Elaine’s alocasia take on this appearance only in adulthood. Young foliage is easily recognizable by its light green hue and softer leaf plate..

The variety of alocasia, as in the photo, does not differ in large sizes, which is a clear advantage for many flower growers.. 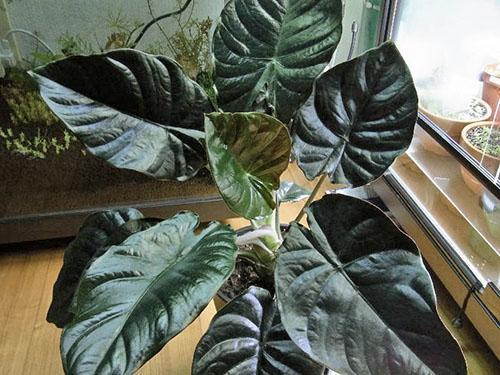 Alocasia Black Magic, belonging to the infernalis species and arousing genuine interest for lovers of exotic plants, has recently begun to replenish home collections. the name of the species means “hellish”, which is fully explained by the appearance of the plant and the color of its dark purple foliage.

You can see the wild growing Black Magic alocasia by traveling through the rainforests of Borneo, Malaysia and other regions of Southeast Asia. Local peoples call the plant “skeleton” because of the bright veins and spots on the dark leaf.. 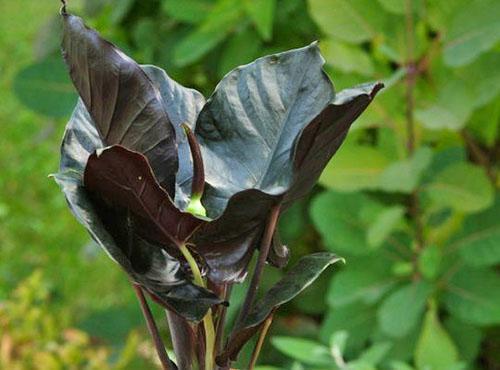 Indeed, the plant is very unusual! It has dark leaves with clearly outlined concave veins, as if shimmering with reddish and purple hues. The height of this room alocasia, as in the photo, usually ranges from 40 to 50 cm.

Interestingly, the perianth, in other varieties and species, is usually white, cream or greenish, in alocasia Black Magic, it is also painted in burgundy, purple or green-black..