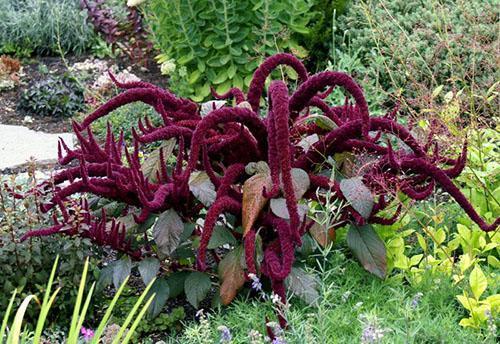 The amaranth plant has existed for over 5 thousand years. At the moment, there are more than 60 species of amaranth in nature. The plant came to European countries from Central America, where it was grown for medicinal purposes by the ancient Mayan and Aztec tribes. These are unpretentious plants that love moisture and sun. It is not difficult to grow them. It is very often grown in special fields for industrial use. It is an ideal animal feed, which is why amaranth is often used on farms and stockyards. Edible amaranth varieties provide useful protein feed from absolutely all of their parts: root system, leaves, trunk.

Before purchasing and planting a plant, it is necessary to determine its type and functional qualities. Amaranth can be food, feed, grain or decorative.

If we are not talking about food use for animals, then it is very important to understand whether such a culture is necessary on a land plot. The main feature of the plant is the strong and rapid depletion of the earthen soil..

Varieties of medicinal and food amaranth are planted in a certain area no more than once every 4 years. Food crops can be planted with seeds that sprout and grow into dense seedlings. Amaranth loves abundant watering and good sunlight..

It is a versatile grain and feed variety that is the most common and popular among farmers. Kharkov amaranth also has medicinal properties. It is processed into silage, green fodder, granules, grass flour from which bakery products are baked. The period from sowing to ripening is 3.5-4 months. The variety is the most productive, as it gives about 50 centners of grain and more than 2000 centners of biomass for feed at the output from 1 hectare.. 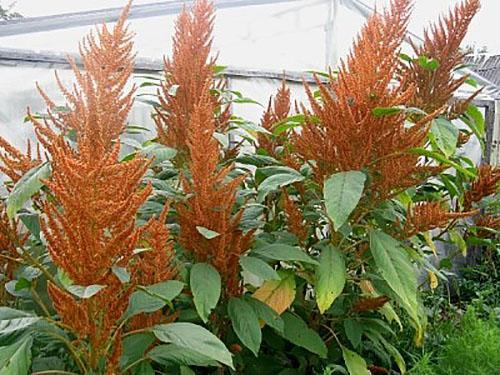 This variety is bred to obtain a large grain yield. Amaranth Giant is a versatile crop that is sometimes used as an ornamental plant. It has bright orange panicles that complement and decorate a green garden, flower garden or front garden. According to its characteristics and yield, it is compared with the Kharkov variety. In addition to a serious grain harvest, it has succulent and large leaves, which are the protein base of animal feed.. 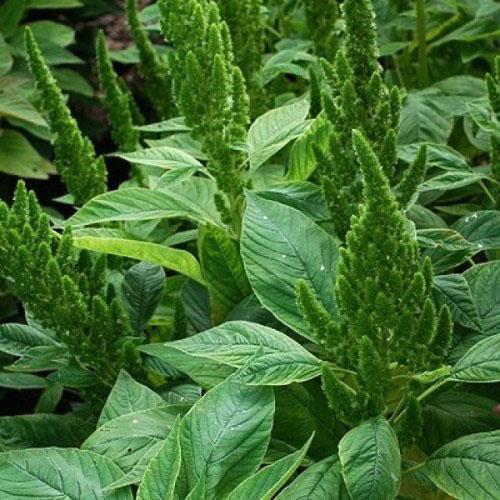 The earliest ripening variety is considered to be a strong man, since it gives a harvest in 50-60 days. Until the final ripening phase, it grows at a height of 100-150 cm. Amaranth Krepysh has very juicy and bright young shoots, which are usually used in traditional cuisine. They are used in salads, soups, side dishes.

Leaves can provide up to 15% of high quality protein.

They are used as green forage in livestock farms. The food grains in the sturdier are large and dense, giving a good harvest. The crop is grown for a rich grain harvest. The vegetation and growth period is on average 100-120 days during the warm sunny period. The average plant height reaches about 100 cm. The Voronezh amaranth variety lends itself very well to harvesting using agricultural machinery. The average yield from 1 hectare is about 25 centners. 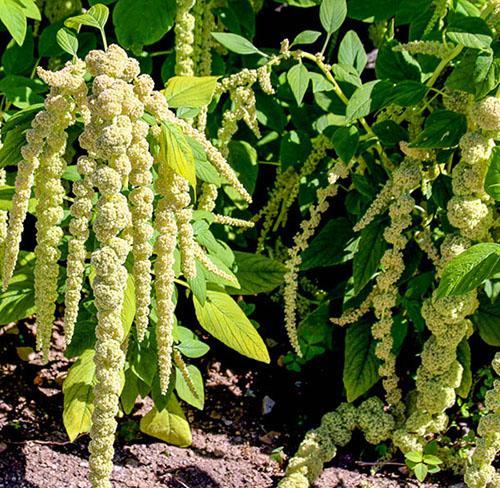 This herb is often an annual and wild plant. It can be found along the roadway, forest plantations or on wastelands. White amaranth got its name because of its characteristic appearance. Its stem grows up to 50-60 cm in height and has a recognizable light color. Elongated amaranth clusters, which fold into spikelets and dense inflorescences, also become white.. 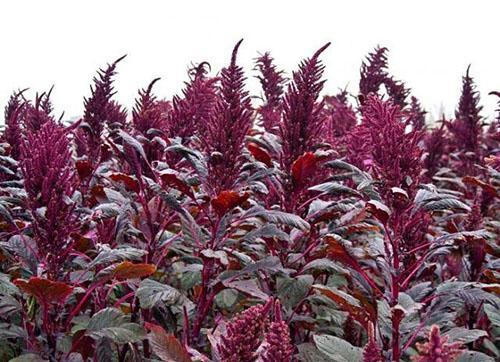 Variety Valentine is rich in its composition of natural trace elements, which allow the plant to be used as an additional feed in the diet of animals. In height, this species can reach up to 120-160 cm. The main recognizable feature is the red-purple leaves of a bright color. Amaranth Valentine is used not only in agriculture, but also in the food industry. A healthy tea is made from its leaves to improve the digestive system.. 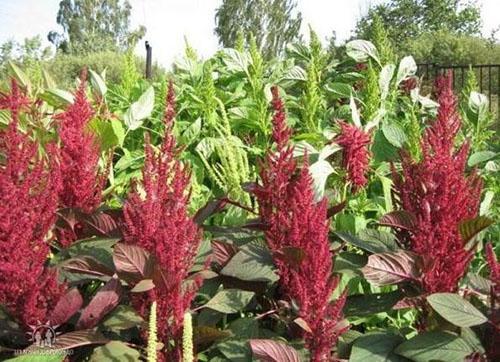 This amaranth variety is the optimal combination of forage, grain and medicinal purposes. In terms of its characteristics and appearance, it in many ways resembles the Kharkov grain amaranth. However, at the same time, the Universal remains less whimsical and matures quickly in the warm spring-summer period. Its average height ranges from 100 to 130 cm. The plant has fleshy dark colored leaves. Amaranth Universal variety is perfect for agricultural needs, farms and large farms. 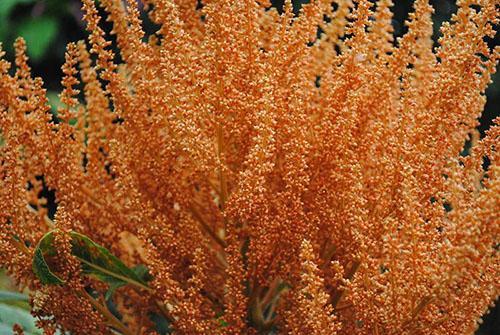 This is one of the types of amaranth, which, in addition to its bright color of the stems, has another feature. This is the tallest amaranth species, which at its peak growth point reaches 230-250 cm. The plant supports its growth with powerful arched stems that have a bright color. Amaranth Orange Giant is used not only as a silage for animals, but also as a delicious flour with a nutty flavor. 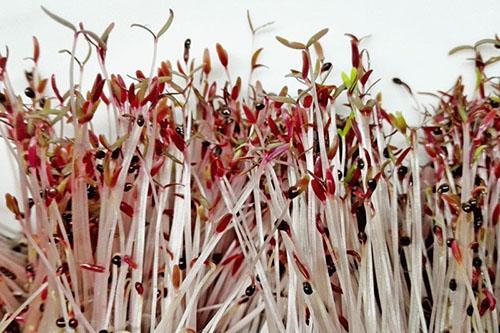 This culture has become extremely popular and in demand recently, when healthy and wholesome food has returned to fashion. The main feature of this variety is the germination of seeds and the use of shoots in the daily diet..

Black amaranth is very rich in useful minerals and trace elements. In addition, small amounts of it in food can substitute for an adult’s daily protein requirement.. 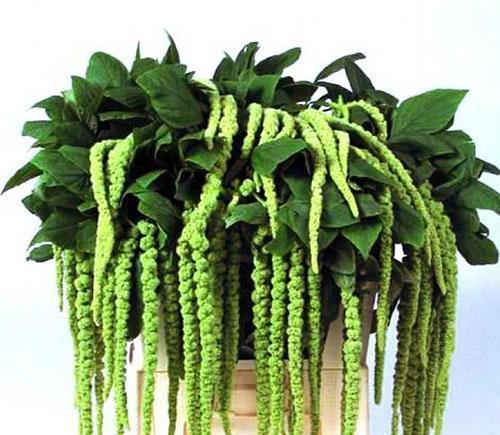 This is an ideal type of amaranth, which harmoniously dilutes flower beds, flower beds and front gardens. They are used in landscape design because of the rich and bright green color, which covers not only the stems, but also the flowers of the plant. In the photo, Green amaranth often looks much more attractive than other plants with bright colors of flowers. Stems of low color at the end of the summer period acquire a beautiful burgundy or brown color. 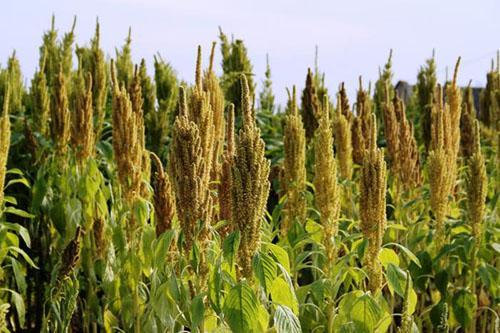 This type of plant reaches an average height of 100-130 cm for this crop. The main value of this variety is the high concentration of useful oil in ripe seeds. Amaranth Ultra is used in medicine and food industry. The plant is recognizable among other crops by bright green inflorescences. 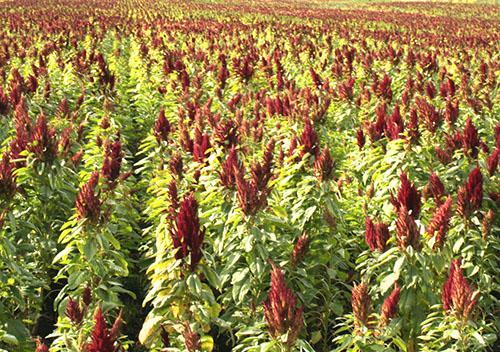 The Kinelsky amaranth variety has a specific appearance due to the fleshy trunk and small thin inflorescences along the edges that resemble needles. The inflorescences fold in this way, creating dense ears of bright red-purple color. This variety often grows on its own in the wild, as a pasture for animals..

Greens of the Kinelsky amaranth variety are rich in vitamins and useful microelements.

This is a tall crop up to 120 cm, which is the main decoration of cages and flower beds. Its main feature is the formation of long hanging inflorescences of a bright purple or burgundy color, which fold into dense spikelets. Amaranth Red Meath blooms for a long time, often remaining until autumn frosts. They are often added to floral autumn compositions or used to decorate special occasions.. 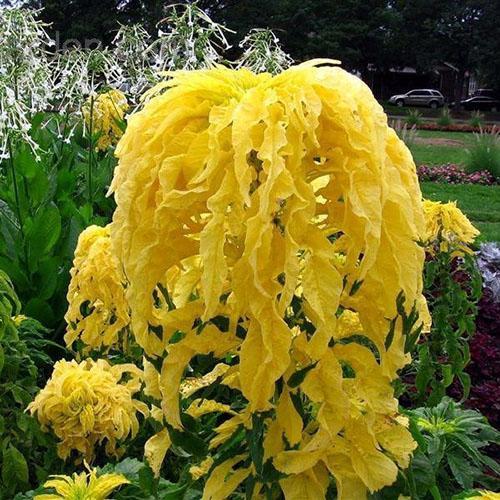 This culture was created by breeders only to decorate landscape areas or park areas. It cannot be confused with other types of amaranth due to the characteristic formation of whole buds by leaves. They create the illusion of a yellow sun with rays. The leaves of the amaranth Sun variety are often confused with real flowers and mistaken for abundant buds with original petals. 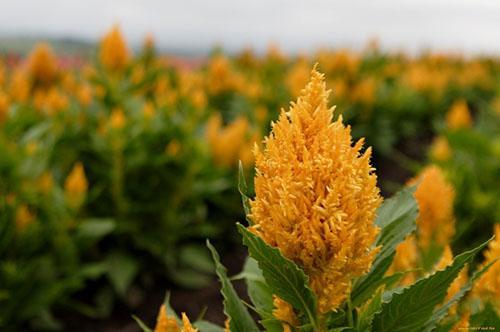 The amber plant gets its name from the formation of a dense panicle from individual inflorescences. Ripe spikelets take on a bright yellow-amber hue. This is a fairly tall crop, reaching up to 120-130 cm in height. Greens, trunk and leaves of amaranth Amber is used as a nutritional complex for livestock farms. 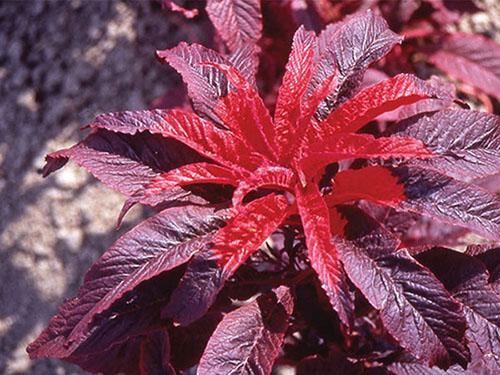 A bright representative of colorful amaranths, which have a sharp transition between the colors of the leaves. The color of the lower row of leaves has a brown-chocolate hue. The top layer of leaves always takes on a raspberry red hue. In the photo, amaranth Molten Fire is found quite often, since they like to use it as a decorative element when decorating bouquets in winter.. 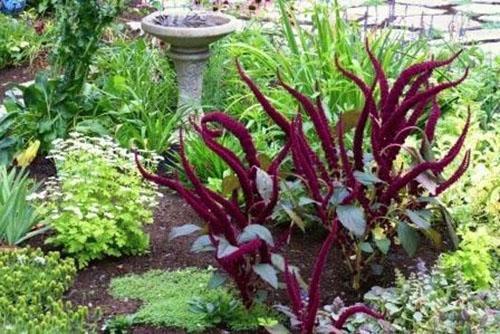 This culture grows into a small bush no more than 50-60 cm high; its characteristic feature is long serpentine inflorescences of a dark and bright color. After ripening at the end of the season, ready-made seeds of Cherginsky amaranth are very much appreciated..

They have a high concentration of antioxidant oils, which are then used for medicinal purposes.. 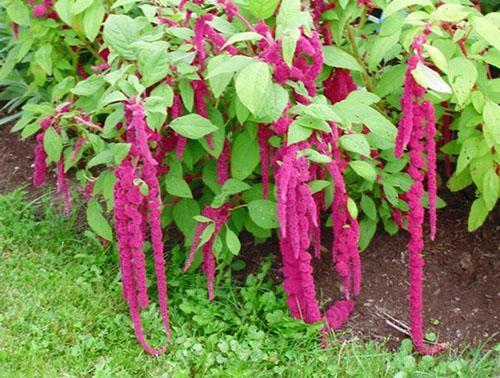 This variety is great for decorating landscape design. It has multi-colored branches of inflorescences, which can reach up to 50 cm. The entire length of the plant reaches up to 1 meter, allowing you to beautifully create flower beds or plantings along the avenues. Photos of Graceful amaranth stand out among other varieties of this culture for their unusual appearance, as they are the pride of breeders. 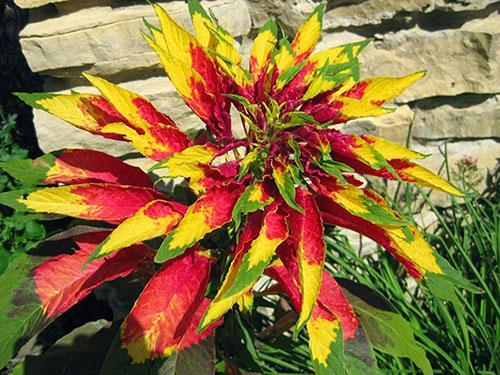 Illumination is often referred to as yellow or red amaranth due to the characteristic color of the leaves. They acquire this appearance during all periods of their growth. Initially, the color of the leaves is just yellow, but the older the culture becomes, the more the color changes sharply to burgundy or red, creating a bizarre pattern on the leaves. Amaranth Illumination is shown below for comparison with other cultures..

Video review of 14 varieties of amaranth