Easy-care tradescantia on your windowsill 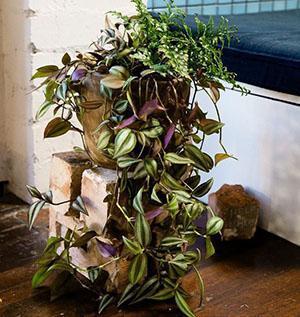 Unpretentious fast-growing tradescantia does not need to be introduced to lovers of indoor plants. Simple home care for Tradescantia, decorative foliage and frequent flowering are three main reasons why these herbaceous perennials have become regulars both indoors and in garden plots for many decades..

Small plants with predominantly creeping stems are found in nature on the American continent, where they inhabit regions from temperate latitudes to the tropics. Tradescantia have adapted well to their habitat. In arid regions, you can see plants with dense leaves, the pile on which does not allow precious moisture to evaporate. In humid places, there are species with juicy stems and such bright glossy foliage..

The simplicity of room tradescantia, a variety of decorative species and varieties attract the attention of both beginners and experienced florists. And more recently, garden tradescantia has appeared in Russian gardens, which does not differ from domestic relatives in either attractiveness or responsiveness to care.. 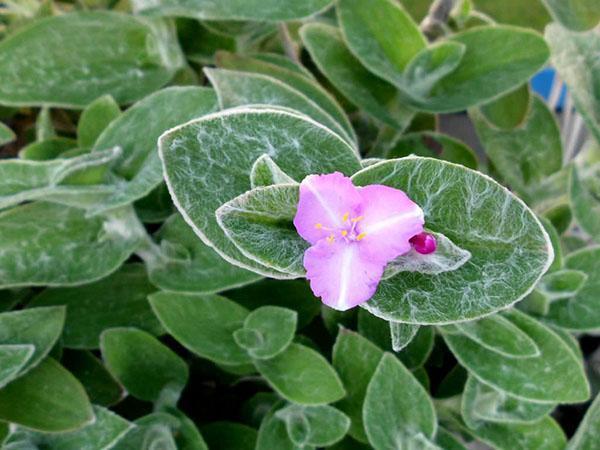 Requirements for the conditions of keeping tradescantia differ depending on their natural habitat. Pubescent plants with dense and thick foliage are more hardy. They tolerate direct sunlight better and are less dependent on watering frequency..

Indoor tradescantia with smooth thin leaves love partial shade and grow best in moderately moist soil. At the same time, variegated varieties are more demanding on lighting. Under the bright sun, they turn pale, and in the shade they risk losing their pattern and becoming completely green.. 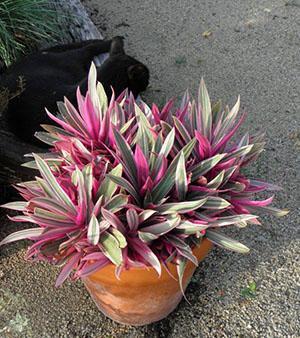 It is best for a room tradescantia, as in the photo, to find a place on the east or west window. On the south side, the plant will need shading, and on the north side, there is a danger:

Most species are thermophilic, but in the summer months it is useful to carry Tradescantia to the balcony, garden or loggia, having previously protected the pot from the scorching sun and drafts. 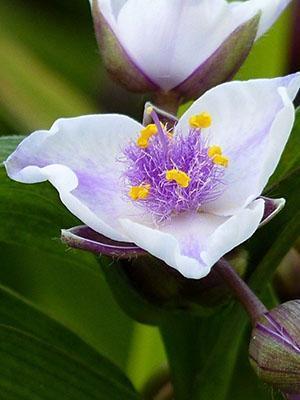 The comfortable temperature for Tradescantia is from 20 to 25 ° C in summer, and a few degrees lower in winter. Although a cool hibernation is preferable, in many cases indoor tradescantia grows well without seasonal changes in conditions. Air becomes critically cold for plants at a temperature of 10-12 ° C.

Many Tradescantia, in addition to the indigenous inhabitants of semi-deserts, are excellent for keeping in moist soil and in the warm season require frequent and abundant watering, irrigation of foliage and showering. After watering, the earthen ball should be evenly moist. Since only the top layer usually dries up by the next procedure, in the summer, indoor tradescantia are watered at least every other day.. 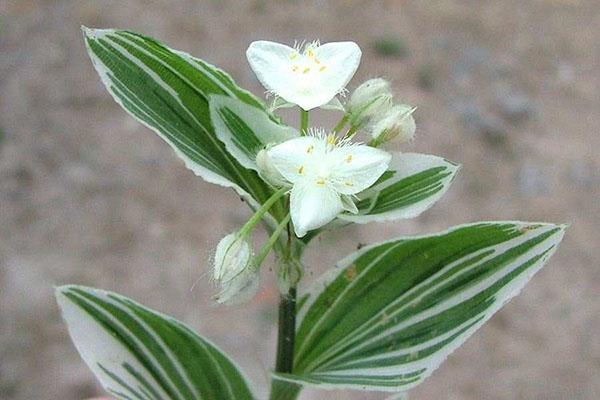 The culture is characterized by rapid growth, therefore, additional feeding must be included in the care of room tradescantia at home. They are carried out in the summer months and in the spring with an interval of 10-14 days. Ready-made complex fertilizers for indoor crops are quite suitable for the plant, but you will have to choose a special approach to variegated forms. From the abundance of organic matter, such indoor tradescantia actively grows foliage, however, it can lose the decorative variegated color of greenery.

Fast growth and formation of beautiful ampelous shoots is an important advantage of Tradescantia. But in order for the indoor tradescantia, as in the photo, to retain its shape and attractiveness, the stems and the central part of the plant do not look bare, the plant needs to be often pinched and updated, forcing it to bush as actively as possible. 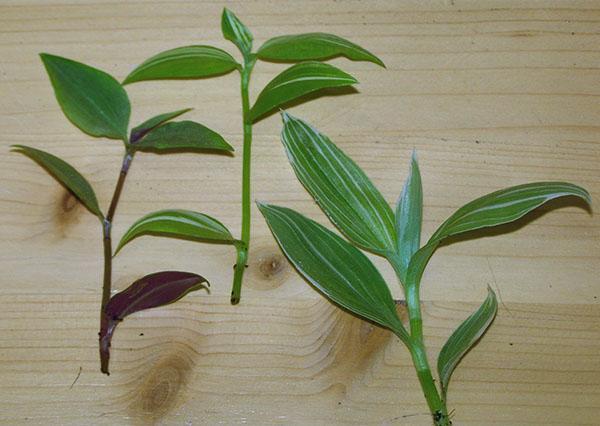 You can cut off growing stems throughout the warm season. Apical cuttings used for vegetative propagation of Tradescantia root perfectly in ordinary water, after which several pieces are planted in their own pots or serve to rejuvenate the mother plant. If it is decided to use the stem sections as seedlings, their length should be at least 5 cm.

With proper home care, Tradescantia, as in the photo, recovers very quickly after pruning, and the seedlings turn into adult fluffy specimens that bloom in the second or third year.

For planting new and transplanting existing tradescantia, you should not take an overly nutritious, organic-rich soil, in which the plants quickly “fatten”, refuse to bloom. 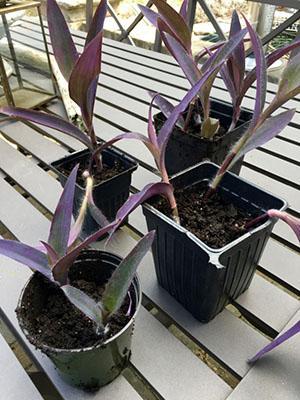 It is best for an ampelous “American” to purchase a ready-made substrate for indoor plants or mix leafy and turfy ground in equal proportions, adding sand and a little peat for looseness. A powerful drainage layer is made at the bottom of the pot. The transplant of tradescantia during home care is carried out in the spring as the bush ages and the root system grows.

Growing and caring for garden tradescantia

In indoor conditions, ampelous species are most popular with florists. And garden tradescantia are actively flowering perennials that form dense caps of greenery due to erect and lodging shoots with a length of 20 to 50 cm.. 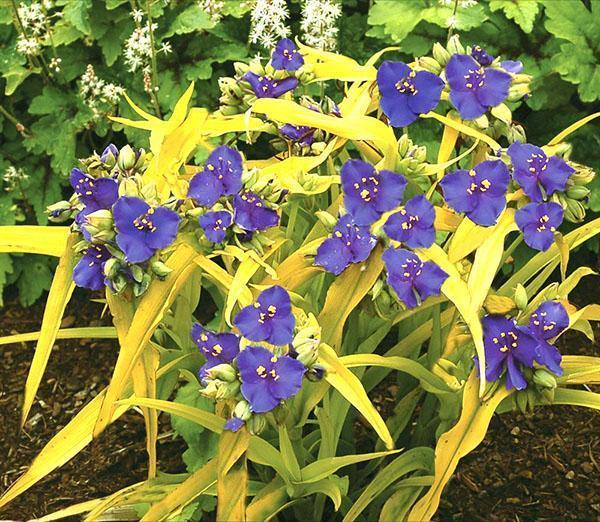 The most common garden tradescantia, as in the photo, are considered hybrid plants, combined into a single species “Virginia tradescantia”. They: 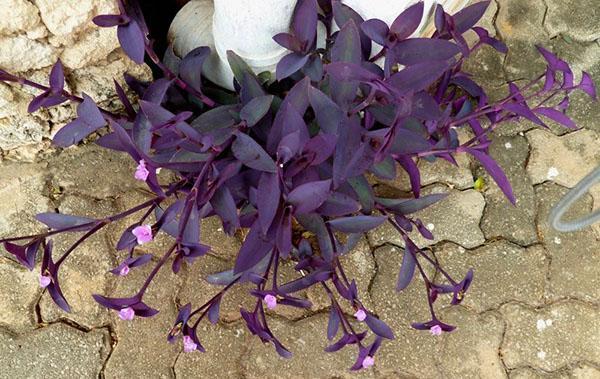 Due to the different growing conditions, caring for a garden tradescantia differs from the care that plants receive at home..

Flowers planted on flower beds and borders cannot be transferred or rearranged if their delicate leaves are in deep shade or in the July sun. Therefore, the site for the garden tradescantia is chosen very carefully..

It is optimal if the plant finds a place in partial shade, where the ground will keep moisture for a long time, but at the same time be ventilated. All Tradescantia are extremely drought tolerant. This is important to take into account not only when planting a garden tradescantia, in the photo, but also when leaving on it.. 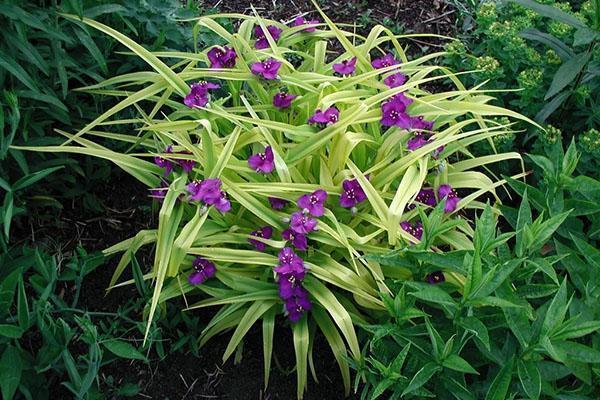 Before planting the plant in the ground, fertilize the soil with a full dose of a complex mineral agent. Then feeding is carried out with a liquid composition every 10 days. The soil under the flowers is moistened in the morning or evening hours, when there is no threat of sunburn for the leaves of the plant. 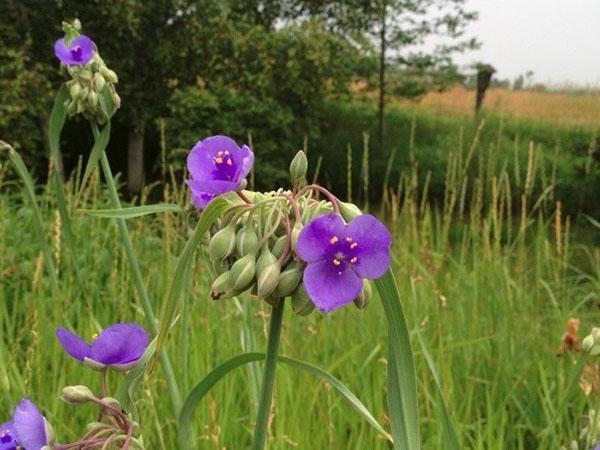 In the middle lane, garden tradescantia survive even harsh winters, for which they are either covered or simply cut off the entire aerial part of the plant. This is a fundamental difference in the cultivation of garden varieties compared to caring for Tradescantia at home. With the onset of spring and the awakening of dormant buds, new fresh shoots appear above the ground..

Spring is a very good time for breeding garden tradescantia. This is done by dividing an adult bush. During spring and the first half of summer, young plants can be obtained by cuttings. The apical parts of the shoots with 2-3 internodes are carefully cut and rooted in the greenhouse. Roots are formed within 15–20 days, and young Tradescantia can be planted in a permanent place.