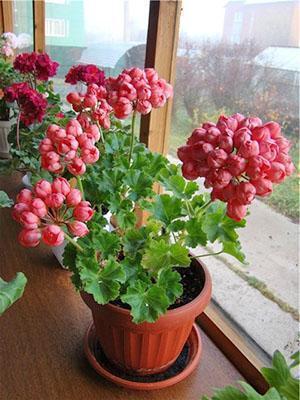 Amazing geranium plants, on which, instead of lush umbrellas, inflorescences appear, more like elegant bouquets of tiny half-open tulips, were first presented to culture fans in 1966.

It happened in the USA in the nursery of the Andrea family, where the tulip geranium was bred, so named after the shape of its unusual flowers. 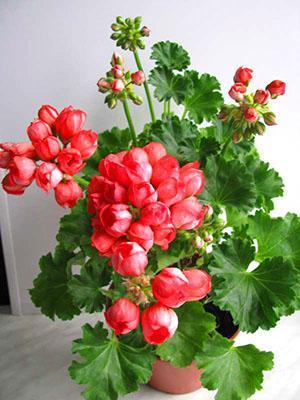 The first geranium variety in history with flowers that remain half-open throughout the entire flowering period was named Patricia Andrea. American breeders Robert and Ralph Andrea were so passionate about obtaining tulip geraniums that over the years they managed to get several more spectacular varieties. Some of them were named, like the first variety, in honor of women close to breeders..

European flower growers got acquainted with tulip-shaped geraniums like in the photo, only 20 years after the appearance of the first plants. At the same time, the flowers aroused not only genuine interest, but also a lot of controversy..

It is believed that tulip geraniums are difficult to select, and this is due to the structure of the flower and the low availability of stamens and pistil. Therefore, for half a century, no more than two dozen varieties and hybrids of these amazing plants have appeared in the world..

However, among specialists there is another explanation for the nature of the extraordinary shape of flowers. Perhaps this variety of geranium was not artificially bred, but was the result of a natural spontaneous mutation of some varieties of zonal geranium with simple flat corollas. Even the presumptive ancestors of tulip varieties – ancient large-flowered geraniums obtained in France at the turn of the 19th and 20th centuries – were called skeptics of the success of the Andrea family nursery..

All currently existing geranium varieties with flowers in the form of miniature tulips are the subject of dreams of amateur flower growers who are not indifferent to blooming ornamental crops..

In this case, the plants are seriously different from each other. In the subgroup there are both tall specimens, the height of the shoots of which reaches 70–80 cm, but among the tulip geraniums there are also real dwarf hybrids and varieties. See also beautiful oleander flower photo! 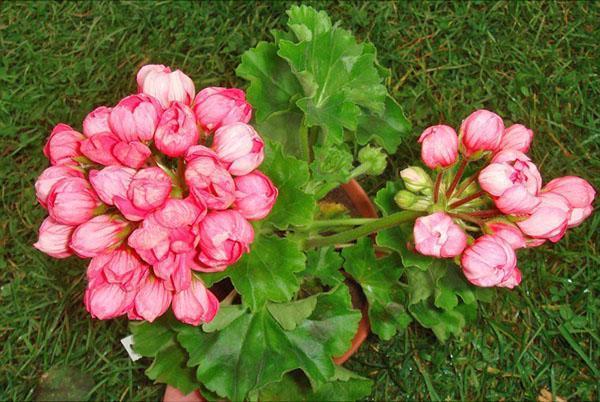 Plants differ in growth rate, color, shape and even the number of petals in the corolla. On average, each flower contains 6 to 9 petals, which can be even or have curly jagged edges. The inner part of a centimeter rim is always more brightly colored than the one that faces outward. Lush bouquets-inflorescences of tulip geraniums, as in the photo, consist of 20-40 flowers. Read about the tulip tree! 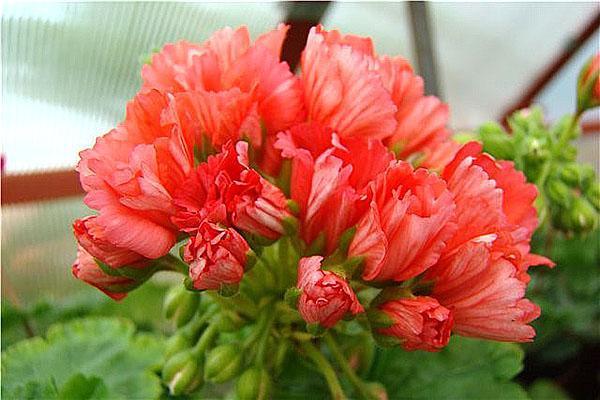 Photos of tulip geraniums amaze with the variety of colors and decorativeness of plants with bright curly foliage. Every year there are more and more people who want to become the owners of such plants..

Features of caring for tulip geraniums

In leaving, tulip geraniums are almost as picky as their relatives with ordinary flowers. With due care, they willingly bloom, grow and reproduce. For planting ornamental plants, you can use both a ready-made universal mixture, and prepare the substrate yourself by mixing in equal proportions garden soil, peat and a small amount of sand to make the soil loose.

Geraniums are afraid of waterlogging of the soil and stagnation of moisture in it, therefore, a powerful drainage layer is poured at the bottom of the pot. 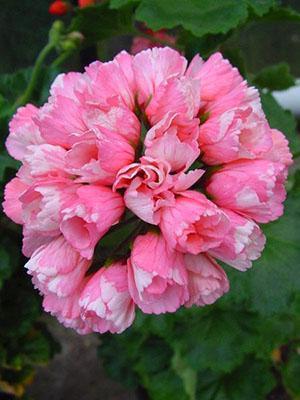 Planted plants should not lack sunlight all year round. Tulip geraniums feel best in bright, but diffused lighting. If you take care of the illumination of the bushes, then inflorescences can appear in the winter. In shaded areas, the shoots of the tulip geranium weaken, stretch out. With a lack of sun, foliage becomes pale, some of the buds cannot form and open.

In the room, geraniums do not require special conditions of detention. The main thing is that in summer the air is warmed up to 20-26 ° C, and the atmosphere is 5-7 ° C cooler. Plants do not tolerate drafts well, from which it is better to protect tulip geraniums. Not good for flowering dry hot air coming from heating devices. 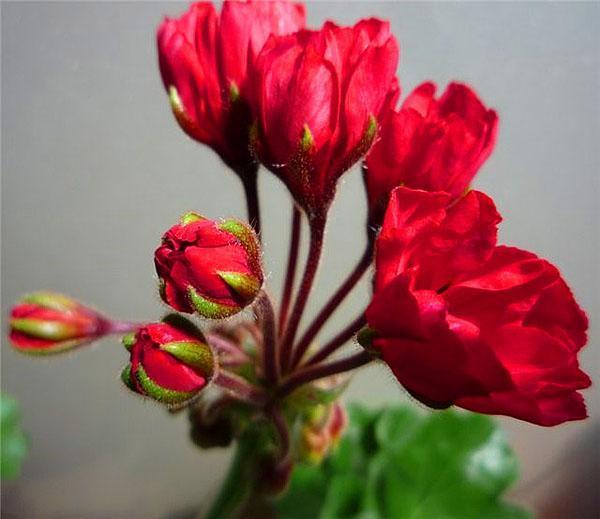 In the warm season, when the need for moisture is high, tulip geraniums are watered every other day, making sure that the water does not stagnate. In winter, watering is carried out much less often, but in no case should you dry an earthen lump under a flower.

Top dressing is carried out from spring to autumn, using liquid complex products with a low nitrogen content, otherwise the plant will give a lot of foliage, but geranium flowering will not please with splendor

Like other varieties of flowering geraniums, tulip varieties need pruning and pinching. These operations are designed to:

As a result, the plant looks more decorative and attractive, and it blooms much more magnificently than before pruning, included in the systematic care of tulip geraniums.. 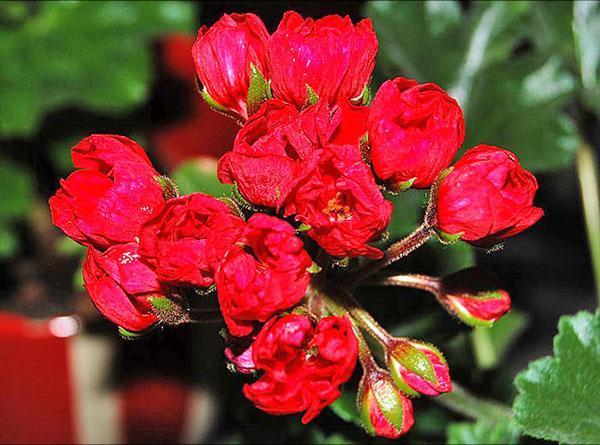 In addition to pinching the tops of the shoots, it is necessary to remove the fading inflorescences and cut off the overgrown, immensely lengthening adult shoots.

Cut off tops are an excellent planting material for propagation. Since tulip geranium seeds, as in the photo, are not always easy to find, and their germination can cause problems for novice culture lovers, cuttings have become the most common way to get new plants..

Cuttings are obtained in the spring or after the end of the mass flowering – in the fall. You can root geraniums in ordinary water, a light substrate of peat and sand, or in a solution of a root formation stimulator. After the first roots appear, the cutting is planted in the ground and exposed to a light window.. 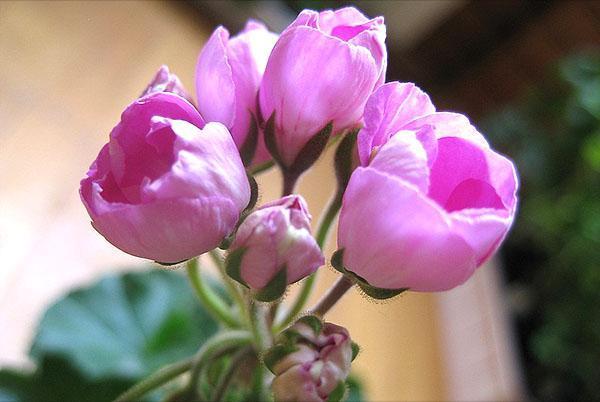 The only feature of tulip geranium that a florist can encounter is the appearance of shoots with ordinary flowers. In this case, it is better to cut such a stem under the base. Similar surprises are not excluded when growing plants from cuttings. The tendency to spontaneous mutations suggests that the variety is not sufficiently fixed, but this does not detract from the decorativeness and amazing attractiveness of miniature “tulips”.