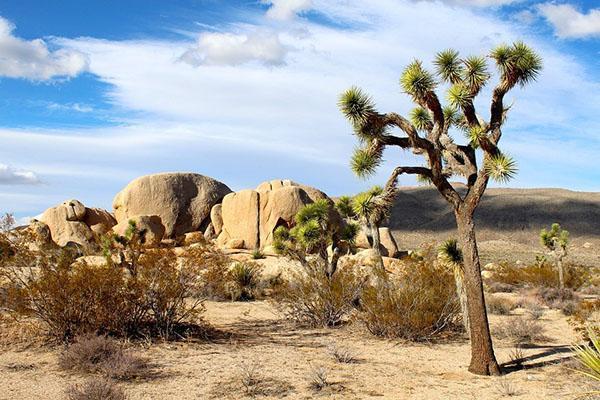 The average Russian resident knows little about the flora of the southern United States, Mexico and other regions of Central America. And what can grow on the endless expanses of the prairies, where the soil scorched by the sun and the blocks of sandstone rolled by the wind to the horizon?

But it turns out that here, in addition to stunted thorns and shrubs, you can see a lot of interesting things, for example, an amazing exotic plant bokarneu or nolina, as botanists call it today. The name change was caused by a more complete and accurate study and description of the culture than the previous ones..

Initially, the bokarneans were recognized as species related to agaves, but according to the modern classification they are included in the Asparagus family and within the genus are combined with the nolins..

According to the latest data, there are about 30 independent species in the genus, the representatives of which are correctly called nolins, but in the literature there is also an old name familiar to flower growers..

Despite the similar natural conditions in which wild specimens grow, representatives of different species are strikingly different from each other. At home, the bokarnea plant can look like a powerful tree with a thickened trunk and a developed crown. But there are varieties in which only a cap of narrow, rigid foliage is visible above the ground.. 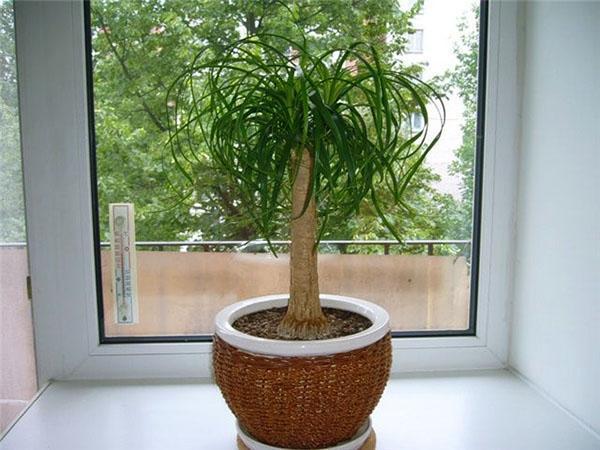 Today, bokarnea is a popular plant for landscaping in the southern regions, an inhabitant of botanical gardens, a greenhouse and even home collections of florists. At the same time, in addition to the official names, the Nolin acquired many popular nicknames. Due to the thickened trunk and the mass of narrow long foliage, the plants are called bottle palm or elephant’s leg, compared to a horse’s mane or called elephant grass.

In fact, such an appearance is not a freak of nature, but a necessity and a very important adaptation that helps a culture to survive. At home, bokarnei plants are forced to fight for every drop of moisture.

In the arid regions of Central America, nolins accumulate water in the thickened lower part of the stem. And tough, pointed foliage, more like cereals, prevents excessive evaporation of moisture from the crown.

Reproduction of bokarnei at home 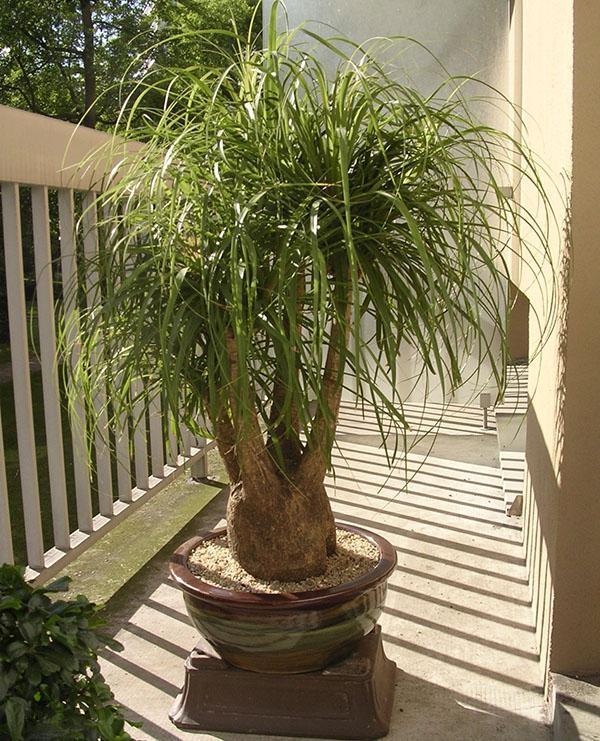 The original appearance of the culture attracted the attention of lovers of ornamental plants. But the slow-growing Central American isn’t too cheap. To become the owner of the coveted “bottle tree”, you can try to propagate the plant by obtaining seedlings from seeds or by rooting a lateral shoot from an adult specimen.

In the warmth, under glass, the seeds spend about 2-3 weeks until the first shoots appear. All this time and subsequently, seedlings of nolina or bokarnea need to moisten the substrate and illuminate to ensure a day of light with a duration of at least 12-14 hours.

If there are lateral shoots on an adult nolina, they can also be used to obtain a young generation of plants. The root system of this culture is shallow and not too powerful, but for its formation it is important to cut the cutting as close to the main stem as possible..

In the greenhouse, with regular, but not abundant watering, the shoots are until complete rooting, then they are transplanted into conditions for adult plants.

The ease of home maintenance and the original appearance have become the reasons that some types of bokarnea or nolina are extremely popular indoor plants. Unlike their wild-growing counterparts, they cannot reach their natural size, and also rarely bloom, but this does not detract from the attractiveness of an exotic plant.. 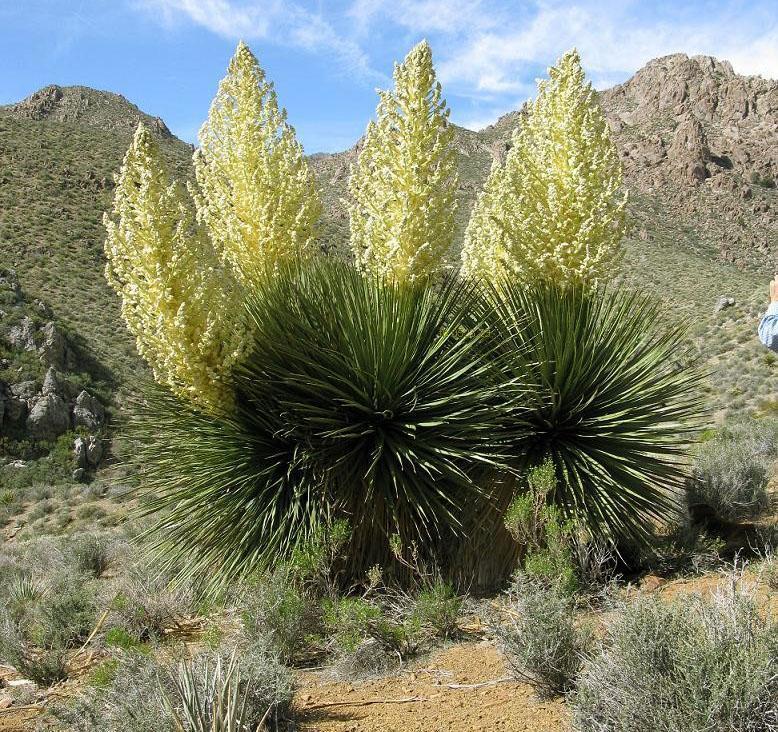 Bocarnea parryi is not the largest representative of the genus, its height reaches 1–2 meters, and when the apex is deformed, two or more rosettes of leaves can form on the plant. Green or gray, hard foliage has serrated edges and grows in length to 50–120 cm. The width of the leaf plate is much smaller and does not exceed 2–4 cm..

At home, the Parry bokarnea plant blooms, forming large racemose inflorescences up to 1.2 to 4 meters long. The flowers are small, about 0.3–0.5 cm in diameter, and are white, pinkish or yellowish in color. Flowering occurs between April and June..

Plants of this species, like many bokarnei, are cold-resistant. In California, where Nolina Parry lives in the wild, she tolerates frosts down to -10 ° С. 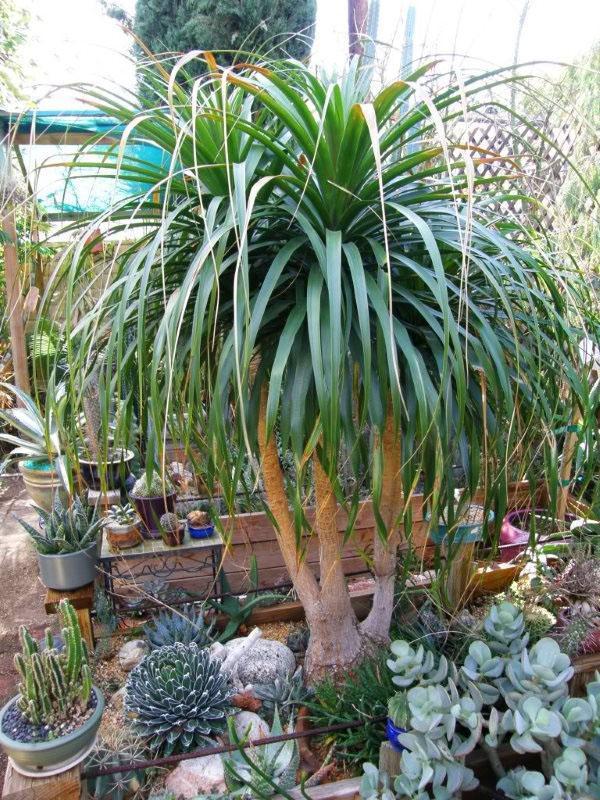 Bocarnea guatemalensis, or Guatemalan tail, is one of the tall plant species, which in nature can reach five meters in height. Like other species, the trunk of this nolina actively accumulates moisture and expands with age. In the lower part, the girth of such an instance sometimes reaches 4 meters..

A characteristic feature is long, ribbon-like leaves, strongly tapering towards the ends. At the disposal of florists there are varieties of bokarnei, as in the photo, with leaves decorated with light stripes at the edges.. 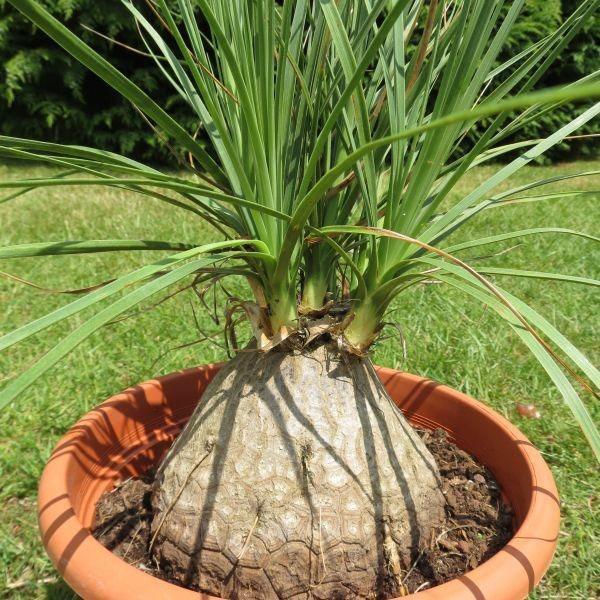 Popular among indoor plant lovers, the bokarnea or nolina variety has earned recognition due to the pronounced convex shape of the trunk. The name of the species translates as thin or slender, but this is more of a joke.! 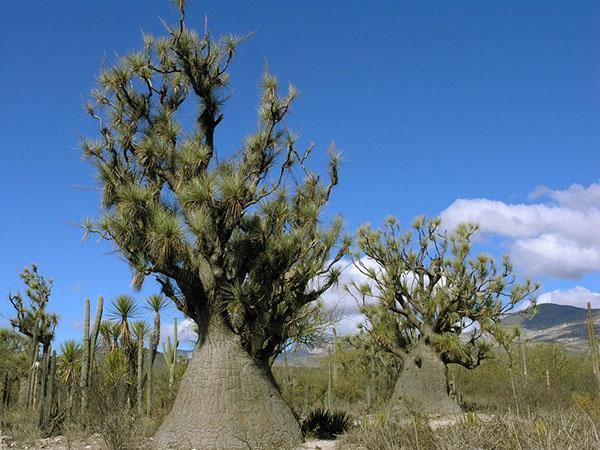 Nolina gracilis is one of the most outstanding plump women in the genus and in the entire plant world. As the culture grows, the trunk at the base becomes very voluminous and reaches 5-7 meters in girth. 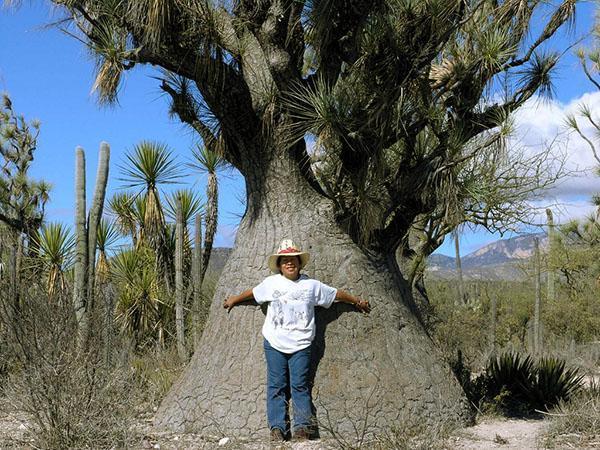 The crown represents thick bunches of leaves up to 70 cm long.. 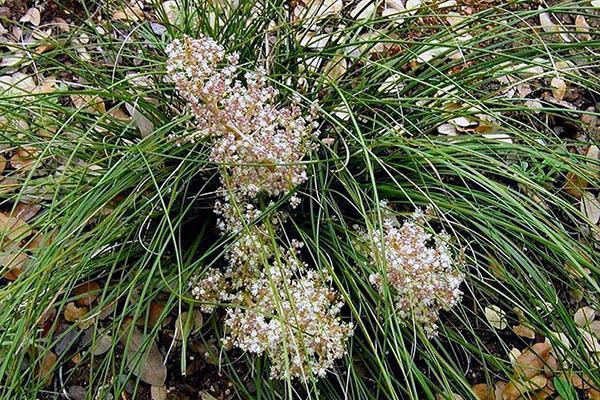 Not all bokarnei are tall. Nolina Lindemeira, called by the local population a damn lace, has practically no trunk, and only extremely strong, hard leaves are visible above the ground. 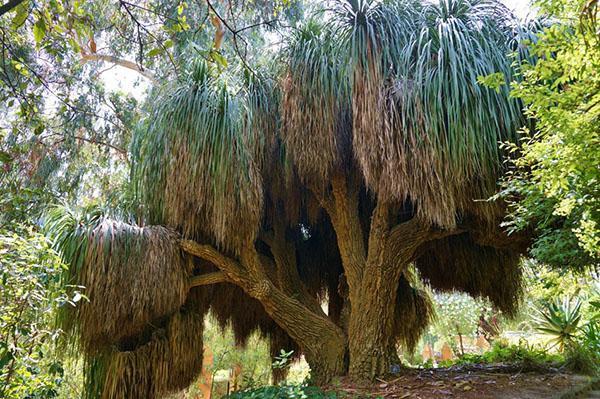 Mexican herb tree, so long-leaved nolina is called in areas where it occurs in nature. A large bokarnea plant, as in the photo, with age turns into a branched multi-meter tree, whose trunk is covered with a dense cork layer of bark. 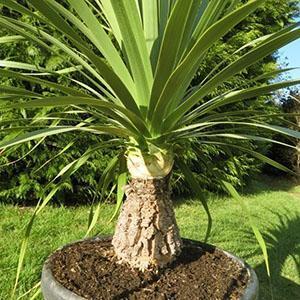 A native of Mexico, long-leaved bokarnea or Nolina longifolia has a powerful erect trunk with a thickening characteristic of a plant of this genus in the root part. Hard, hanging leaves are located at the apical part. Over time, the old foliage dries up and turns into a kind of skirt, covering the trunk almost to the ground.

Blue nolina or intervez grass, as Nelson’s bokarney is called in northwestern Mexico. A frost-hardy, unpretentious variety of bokarnea, as in the photo, was discovered in the desert mountainous regions of Tamaulipas and was later described in 1906. The plant is not afraid of cold up to -12 ° С. 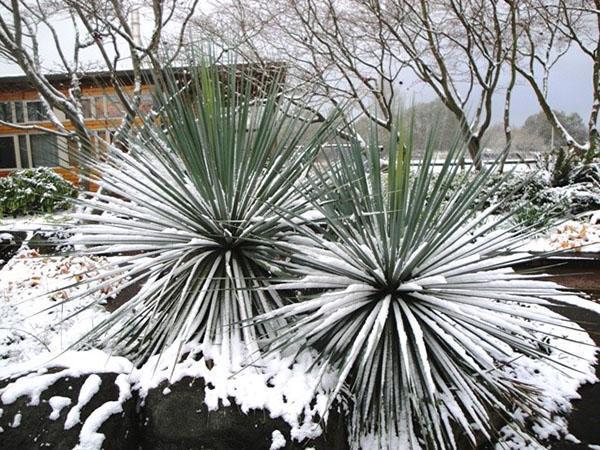 Nolina nelsonii is distinguished by bluish-green leaves with a dense serrate edge and up to 70 cm long. The leaves are hard, sticking out in different directions. The plant itself can reach a height of 1.5-3 meters.

The appearance of flowers on this bokarnea variety is observed in the spring. After flowering, several side trunks form on the plant, subsequently replacing the main.

The trunk of young specimens of nolina of this species is almost invisible. It can be observed only in mature plants that have already lost more than one row of foliage in the root zone.. 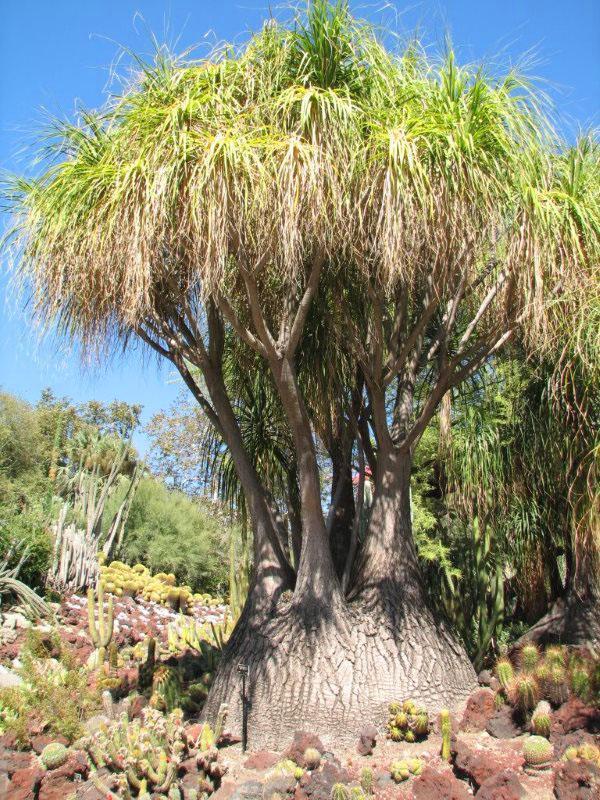 Bokarnea recurvata, popularly called the elephant’s foot or bottle palm, is home to the state of Tamaulipas, Veracruz and San Luis Potosi in eastern Mexico. The species has been most studied and domesticated in the second half of the 19th century. In Mexico, botanists have discovered the oldest specimens of the bokarnea retracted, about 350 years old.. 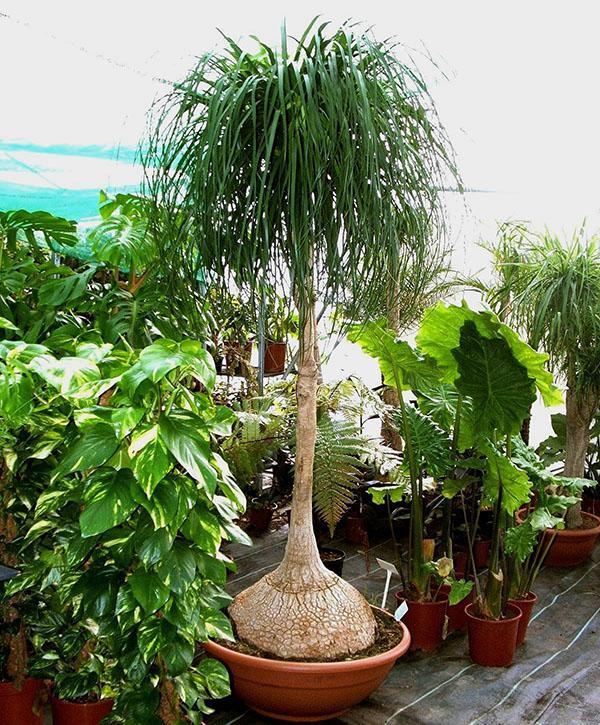 Bokarnea bent or nolina recurvata in nature grows on a par with the largest trees. An adult specimen can be 6–8 m in height, but in a pot culture, the maximum size is much more modest, only one and a half meters. However, this does not affect the amazing beauty of the plant. Bocarnea will decorate even the most modest interior of the room.

In addition to the trunk in the form of a bulky bottle, the plant is easily recognizable by its long leaves hanging from the apical rosettes. Green leaf plates up to a meter long in some varieties can be crimped. 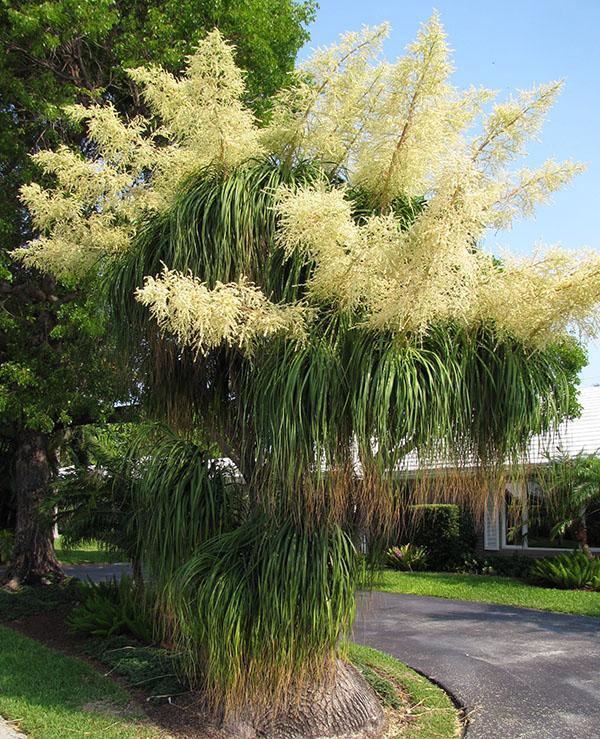 In indoor conditions, bokarnei do not bloom, and nolina recurvata is no exception. But in the homeland, lush, summer, paniculate inflorescences of a plant are not uncommon. The largest specimens of bokarnea bent and their flowering can be seen in greenhouses, where plants quickly adapt and coexist with agaves and yuccas.. 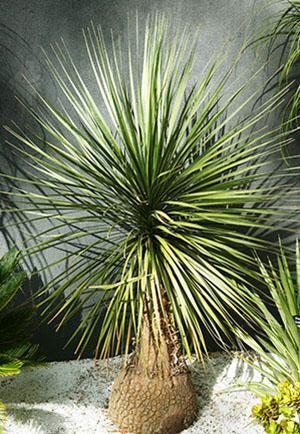 Nolina or bokarnea compressed lives in the central regions of Mexico. The plant has a powerful stem, shaped like an earthen vessel or bottle. The leaves, like all related species, are narrow and very tough. In their homeland, bokarnei plants of this species withstand frosts down to -5 ° C, easily tolerate long dry periods and do not suffer from an abundance of sun.

One of the most eagerly flowering species of bokarnea is found in northern Mexico and the southwestern United States. Locals call this relatively low herbaceous plant Sacahuista or beagrass. The rosette of coarse thin serrated leaves grows in width to two meters. Individual bokarnei leaf plates, pictured, grow up to 130 cm in length. 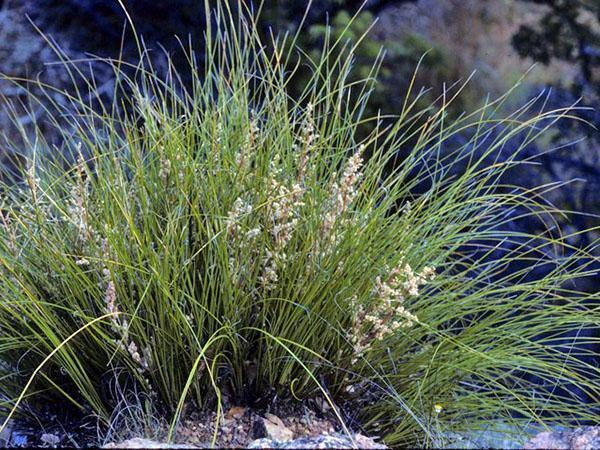 Unlike other species, nolina microcarp does not have an aboveground trunk, the entire lignified part is located under the surface of the soil. During flowering, in addition to paniculate inflorescences consisting of small white-yellow flowers, the plant forms characteristic twisting antennae up to 1.5-1.8 meters in length.