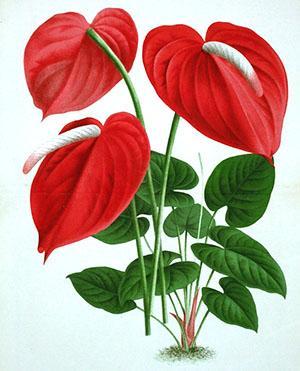 The history of some plants cultivated by man goes back several millennia. Acquaintance with anthuriums, as with one of the genera of the Aroid family, began only a century and a half ago, but during this time many myths and sometimes persistent misconceptions have formed around the plants.

One of the often heard opinions regarding the origin of anthurium is that the lush blooming species are native to the Pacific Islands, including Hawaii. Indeed, getting into this paradise of the world, one cannot help but be surprised at the diversity of the plant world, in which anthuriums occupy one of the main places..

Today, this particular culture is considered the “heart of Hawaii”, a symbol and a local mascot. A lot of the brightest and most unusual hybrids appear on the islands, but, contrary to the myth, in which the Hawaiians themselves believe, the birthplace of anthurium is not at all here..

Where is the birthplace of anthurium? 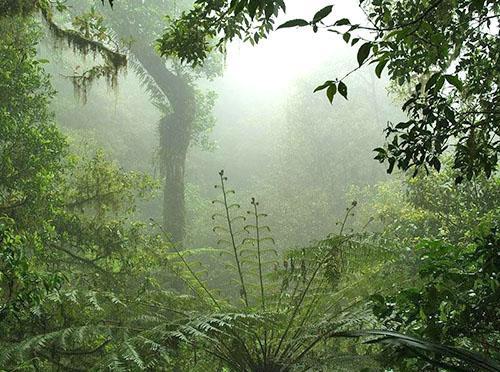 The discovery of one of the largest genera of the plant world took place in 1876, when an enthusiastic botanist from France Edouard André, traveling in South America, did not find one of the anthurium specimens right at his window. A previously unseen plant was transported to Europe, where the abode of the foggy forests of Colombia was described and named Anthurium andreanum.

The plant with green foliage and erect peduncles, crowned with inflorescences-cobs and red bracts, turned out to be widespread throughout Colombia and in the northern regions of Ecuador. It is these places that can be considered the birthplace of anthurium and a kind of center for the spread of culture around the world..

Hawaii became one of the first places where anthuriums came at the behest of the Europeans. The unusual flowering plants were brought to the islands in 1889 by missionary Samuel Damon, who did a lot for the region and even became the Minister of Finance of the Republic..

Another misconception is related to which plants can be called anthurium. Unfortunately, most flower growers classify only Anthurium andreanum and Anthurium scherzerianum with decorative bright inflorescences to the genus. This is not true. 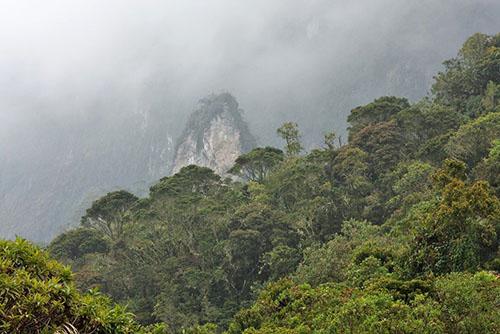 It turns out that not only plants with a recognizable bright veil live in the territory of South and Central America, but other closely related species..

They are included in the Anthurium genus and are of interest to all plant lovers, including those involved in indoor crops. Blooming anthuriums both at home and around the world have become fashionable indoor and garden plants, they are appreciated for their visual attractiveness and durability, even when cut inflorescences that retain freshness from 2 to 8 weeks.

Today, according to the most conservative estimates of scientists, the genus Anthuriums, whose range extends to the subtropical and tropical regions of the American continent from Mexico to Paraguay, includes 800 species. And in 2010, botanists announced 1000 species of anthuriums and the need to continue the comprehensive study of the flora of America. 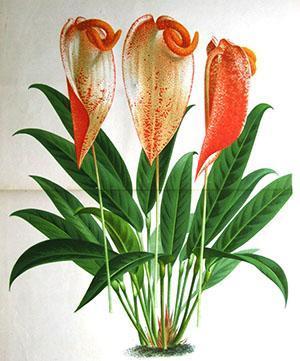 Anthuriums are widespread in the forested Andes and Cordilleras. Here plants prefer to settle down at altitudes up to 3.5 km above sea level. Moreover, among the inhabitants of the humid tropics, both terrestrial plants and epiphytes, as well as species occupying an intermediate niche, can be found. Such anthuriums, starting their age on the lower tier of the forest, gradually, with the help of roots and shoots, rise higher to the sun. Below, in the savannas with a drier climate, you can also find anthuriums, perfectly adapted to this lifestyle..

A video about anthurium will acquaint you with the features of plants, their habitats and tell you about the varieties suitable for home cultivation. 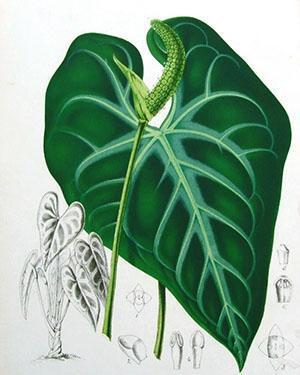 The adaptability of all types of anthuriums is extremely high. They are remarkably settled in the soil, some varieties are epiphytes. Anthurium rosettes look like small and large nests on the trunks and branches of trees. Moreover, the plants are not parasites. They do not take away juices and food from the species on which they have entrenched, but feed on small deposits of organic matter and atmospheric moisture and oxygen.

The only environment that plants did not obey is water..

Despite the prevailing opinion about the love of anthurium for moisture and even the possibility of growing it in an aquarium, none of the studied species can adapt to life in water. 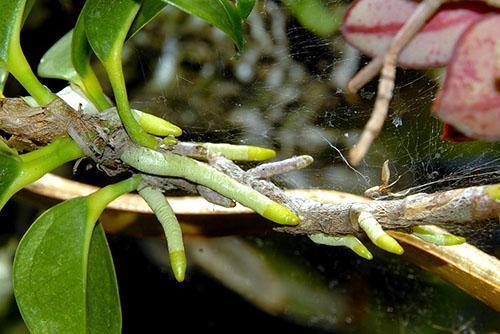 For example, Anthurium amnicola grows on coastal rocks, clinging tightly to them with roots. This gives the plant the opportunity to receive oxygen from the moist air coming from the stream, but all the green parts are dry..

All anthuriums have one homeland – this is South and Central America. But due to the different growing conditions, the sizes of anthuriums and their appearance vary significantly from species to species.. 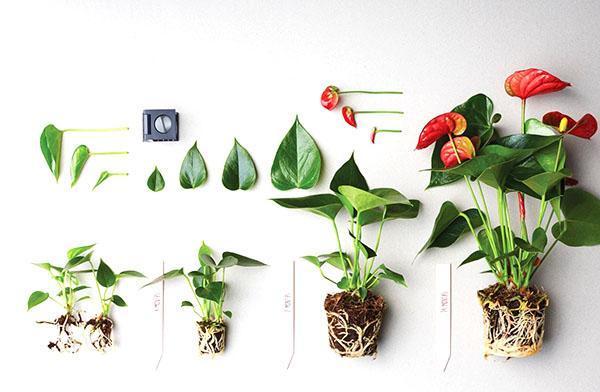 Anthuriums are very diverse, while most species do not have such a bright veil in the shape of a scarlet heart, and the size of plants can be very modest and truly gigantic..

Anthuriums are found in many areas of South and Central America. But as botanists say, the birthplace of brightly blooming anthuriums is the western part of the Andes in Ecuador and Colombia. The rest of the species are of interest not because of the brightness of the inflorescences, but, rather, due to the foliage, which has the most bizarre shapes and sizes. However, for all anthuriums, common signs are also inherent..

Most anthuriums have thick, often shortened stems, densely covered with scales from already dead leaves, aerial roots and the foliage itself. Interestingly, leaves within the same genus can have a completely different shape, size and texture. In addition to heart-shaped or wedge-shaped, like the most common flowering anthuriums, leaves, you can find varieties with rounded, lanceolate, whole or dissected leaf plates. Leaves are attached to the stems using long or very small petioles.

As it grows, the stem of the anthurium gradually becomes bare, with the exception of only certain terrestrial species.

The size of the anthurium primarily depends on the leaf plates, which can reach lengths from 15 cm to one and a half meters. As the shapes and sizes of foliage are varied, so are the types of its surfaces. In addition to leathery and very dense leaves, like Andre’s anthurium, you can also find smooth elastic leaves, as well as leaves with a velvety surface, like Crystal Anthurium. 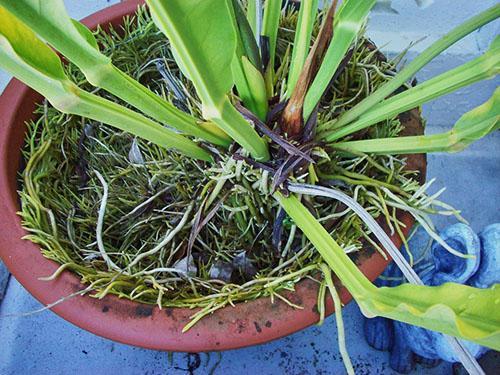 In conditions of dense forests, where the humidity is high, and it is important not to miss a single ray of the sun, anthuriums have learned to turn the leaf plates so that they are always directed towards the luminary. Epiphytes living in drier conditions receive nutrition and moisture due to the cone-shaped rosette of leaves. Plant residues, humus particles, and the moisture necessary for the plant gradually get into it..

A worldwide misconception is also associated with the flowering of anthurium. What many consider to be a large flower, in fact, is its inflorescence and a modified bright leaf, a bract. The same inflorescence is also found in tender spathiphyllum.. 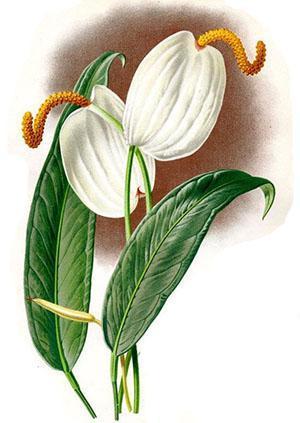 The cob-shaped inflorescence, consisting of barely distinguishable bisexual flowers, can be either straight or spiral-shaped, have the form of a cone or a cylinder rounded at the end. The color of the inflorescence ranges from white, cream or yellowish to blue, purple or violet. As it ripens, the ear turns green in some species..

The ear of anthurium is surrounded not by the only large petal, but by the bract, which is actually a leaf, although it is of a very unusual appearance and color. For varieties of anthurium for the home, such a blanket is quite large and decorative. And that is why the plant is called today “lacquer” or “rainbow” flower. The name is very suitable for modern hybrids with bedspreads not only of one bright color, but combining two or three shades not found in nature.. 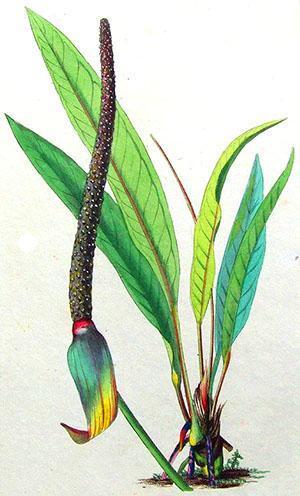 But in decorative deciduous varieties, the bracts are sometimes completely difficult to distinguish, which does not prevent plants from luring pollinating insects.

When the pollination process is complete, small spherical or oval fruits form on the ear. Inside the juicy berries there are from 1 to 4 seeds, which in nature, in the homeland of anthuriums, are carried by birds and rodents..

Varieties and hybrids of anthurium for the home

The popularity of flowering species of anthurium has led to the fact that work is actively underway all over the world to obtain new varieties and spectacular hybrids. Breeders present their achievements not only on store shelves, but also at flower exhibitions, such as, for example, the annual Extravaganza tropical plant festival under the patronage of the Princess of Wales..

As a result, the plants grown by modern growers, stunning in their beauty and unusual appearance, are strikingly different from the varieties that were once found in the homeland of anthurium, on the American continent.. 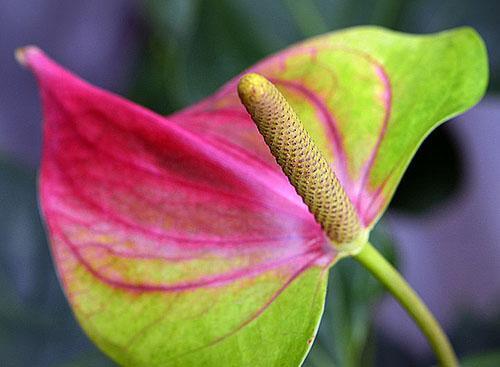 The production of hybrids is associated with pollination of one plant with pollen taken from another specimen. This operation is aimed at producing varieties with brighter and larger inflorescences, beautiful leaves or other parameters desired by the breeder. To fix the result, it takes a long time and the cultivation of many generations of plants..

Modern technologies, which involve growing not from seeds, but from tissue culture, which carries all the information about the mother plant, make it possible to reduce the time for development and selection. Thanks to such complex biochemical operations, today most of the anthurium plants offered by the trade for the home, garden and cuttings are obtained.. 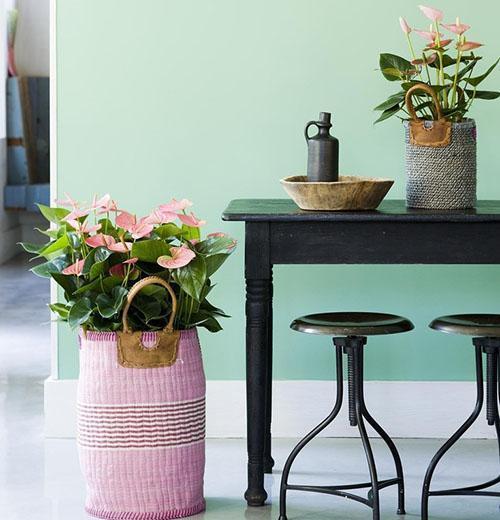 Thanks to such intensive work, anthuriums appeared, the sizes of which are extremely convenient for growing at home, as well as plants with a bright unusual color. But scientific advances and innovative technologies are not always used for the benefit of the grower..

Unfortunately, many commercial growers often use gibberellic acid or GA3 when growing anthuriums. This compound is a plant hormone that influences the quantity and quality of flowering, as well as contributes to the rapid formation of inflorescences..

As a result of treatment with a similar chemical, anthurium intended for the home, without developing, ends up on the counter in bright blooming. Once in the house, such specimens are difficult to tolerate acclimatization, and then they can be disappointing, since they bloom much more modestly than before purchase..

Learning to care for anthurium – video