Gloxinia Yesenia will surprise us with its beauty 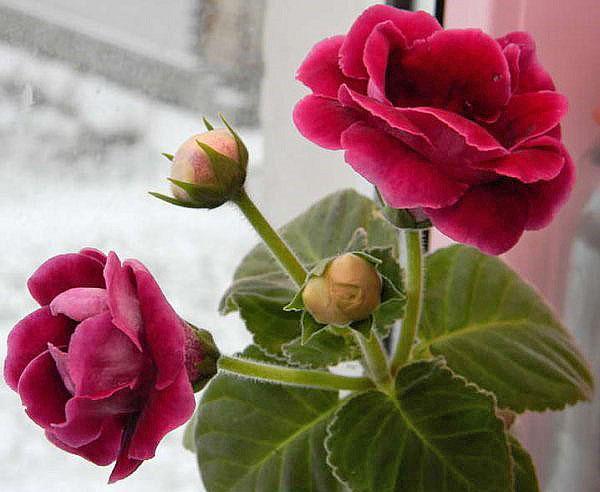 Gloxinia is one of the most popular indoor plants from the Gesneriaceae family. Terry gloxinia Yesenia wins the hearts of those who first saw a spectacular plant, and even sophisticated flower growers. Velvety, purple-colored bells sparkling in the sun rise above the dark foliage and adorn windowsills from May to September.

Numerous varieties of hybrid gloxinia come from wild species and cultivated varieties bred by breeders earlier. Plants with new qualities, unique corolla colors appear very often. This is facilitated by the popularity of the culture, as well as the relative ease with which even hobbyists can breed a new hybrid. Terry varieties are the most spectacular and are in demand by flower growers all over the world.. 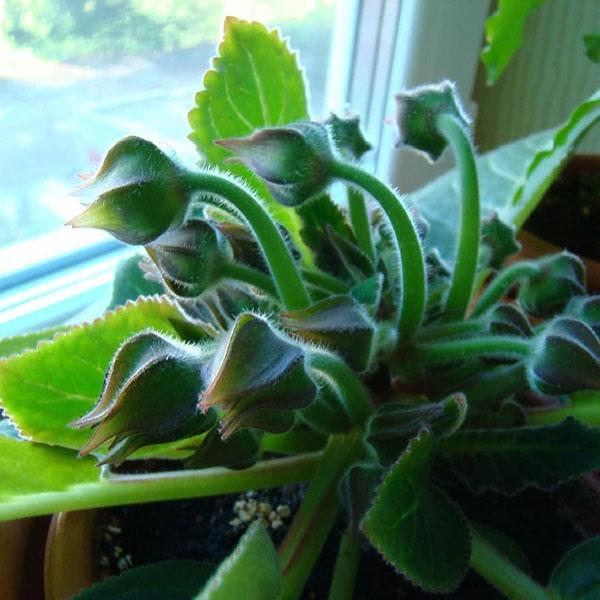 Yesenia belongs to industrial varieties of Dutch origin. As a rule, such plants are unpretentious, perfectly betray their characteristics during vegetative propagation and, of course, amaze with their magnificent flowering..

Happy owners of gloxinia Yesenia confirm that their pet has all the listed qualities.

A plant with a flat-round tuber, hidden underground, above its surface forms low, rarely growing longer than 8-10 cm shoots with succulent oval leaves. And the stems, petioles, and leaf plates are densely pubescent. The buds appearing in the center of the rosette are no exception..

By the time of the dissolution of the densely burgundy bells, the peduncles reach a height of 15–20 cm, and the whole plant – 25–30 cm. Therefore, connoisseurs of gloxinia classify the variety as a standard.

A striking feature of the Yesenia variety gloxinia is the shape of its flowers. As soon as the petals emerge from the opening sepals, the buds become imperceptibly pink. The resemblance to the rose persists when gloxinia appears in all its splendor.

The large flower consists of two or three layers, which gives the corolla a spectacular double look. The inner side of the petals is painted in a dense crimson, purple, sometimes almost black. Outside, the bell is much lighter, the same pinkish tone can be seen in the depths of the neck of the flower, closer to its base. 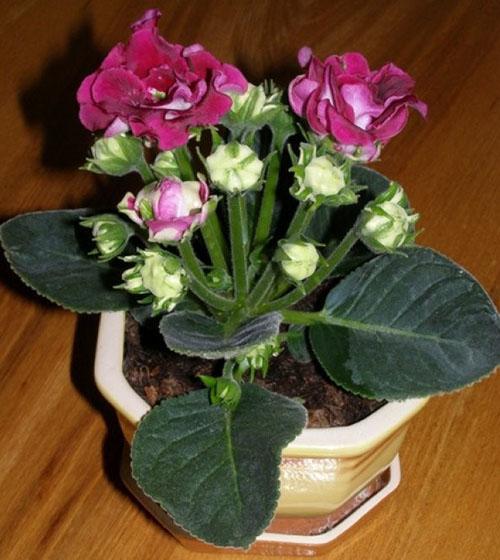 The variety is characterized by bouquet flowering. That is, from 3 to 10 bells simultaneously open on the plant, like brocade, flashing in the light in hundreds and thousands of bright sparks.

If optimal conditions are created for the flower, flowering continues from May until the end of summer.. 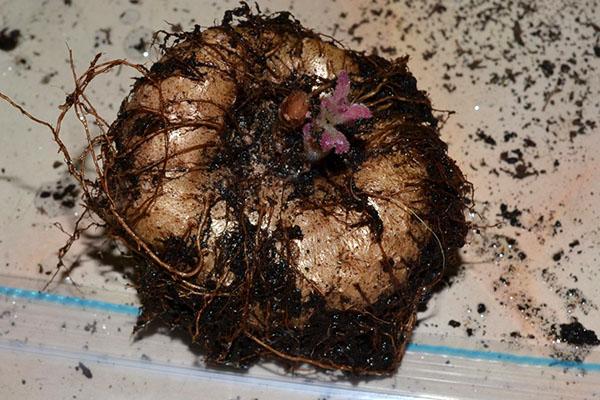 Gloxinia is a plant with a pronounced dormant period. Planting is carried out in the spring, when the tubers “wake up” and tiny fluffy sprouts appear on their surface..

For gloxinia Yesenia, small pots are suitable, in which the upper diameter is equal to the depth, and at the bottom there is a drainage hole.

On top of the drainage made of fine expanded clay or crumbled polystyrene, the container is filled with loose nutrient soil. Gloxinia thrive in ready-made Saintpaulia substrate.

If it is not at hand, a suitable mixture is made on the basis of:

If the resulting soil is too dense, you can add chopped sphagnum moss, perlite or vermiculite to it. The finished substrate for the Yesenia gloxinia flower should have an acidity of 5.5-6.5 units. 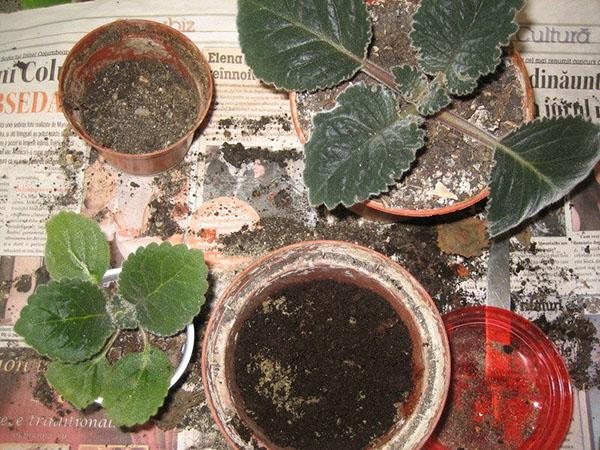 Gloxinia prefer a shallow planting. The tuber is pressed into the ground and sprinkled with earth so that the sprouts do not have to break through the thickness of the substrate. After that, the flower is watered with warm soft water.. 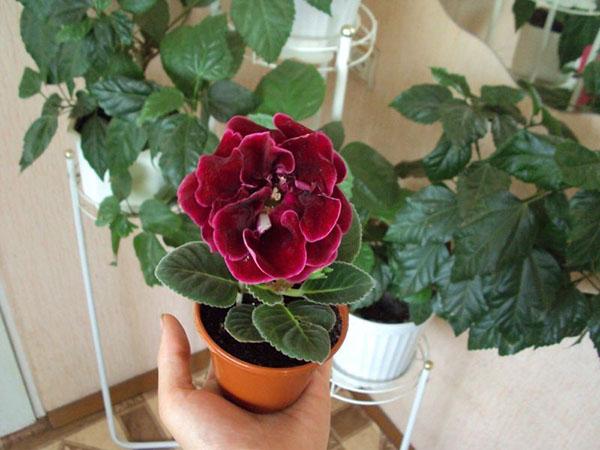 The optimal daylight hours are 14 hours, with gloxinia responding best to ambient light. Therefore, the pots are placed on the east or west windows. On the south side, the flower can suffer from sunburn, looks depressed and often sheds buds. Here he needs shading. On the north side, the beauty blooms much more modestly, the cuttings are stretched, the leaves and flowers become smaller.

Gloxinia grows well and blooms at 20-24 ° C. Do not forget about watering gloxinia.

The soil in the pot is regularly moistened:

In addition, during the growing season around the plant, the air humidity is maintained at a level of 70–80%. To do this, use pallets with wet expanded clay, household humidifiers and other improvised methods. 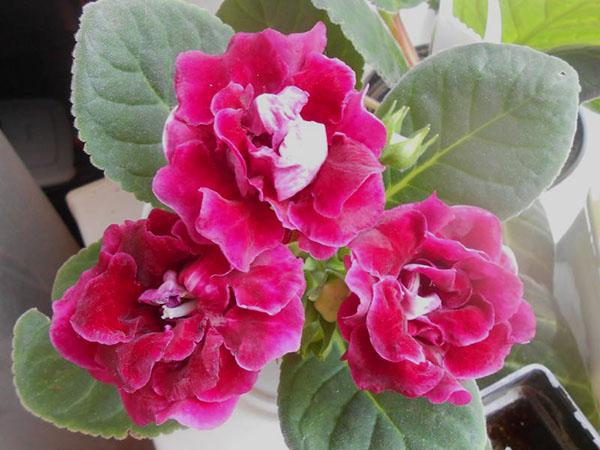 6 weeks after planting, regular feeding of the plant begins. To do this, it is better to use ready-made compositions for Saintpaulias or flowering indoor plants. In such compositions, phosphorus and potassium compounds predominate, which stimulate the growth of the root system and the formation of buds.

By autumn, watering is reduced, feeding is stopped until next spring. 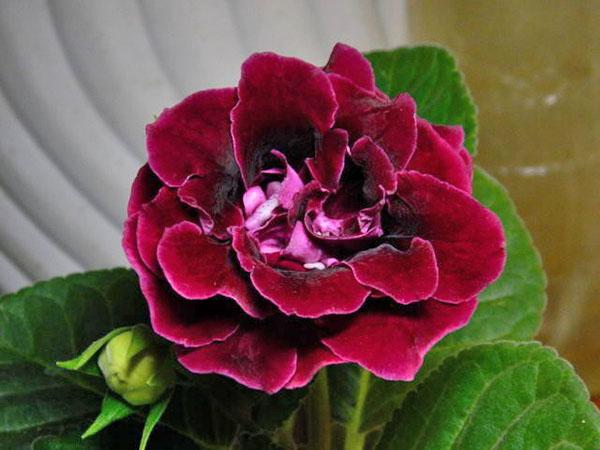 At the end of September, a dormant period begins for the flower. The aboveground part gradually dies off. For the grower, this is an important signal – it’s time to prepare a dark cool corner for the green pet, where the temperature will not exceed 10-15 ° C.

To prevent rot and other problems, gloxinia tubers are treated with a fungicide and dried before laying for winter storage..

The tuber can be removed from the soil, wrapped in sphagnum or laid in sawdust. In this form, gloxinia is sent for “wintering” at least until February. When it is time to “wake up”, the plants are transplanted into a pot of a suitable size. Large tubers can be cut with a sharp knife. In this case, the cut points are sprinkled with charcoal powder..

Since over the past year the soil in the pot has accumulated a lot of salts, compressed and lost a lot of nutrients, it is reasonable to replace it with a new substrate..