Lakonos: planting and caring for a giant bush with original flowering 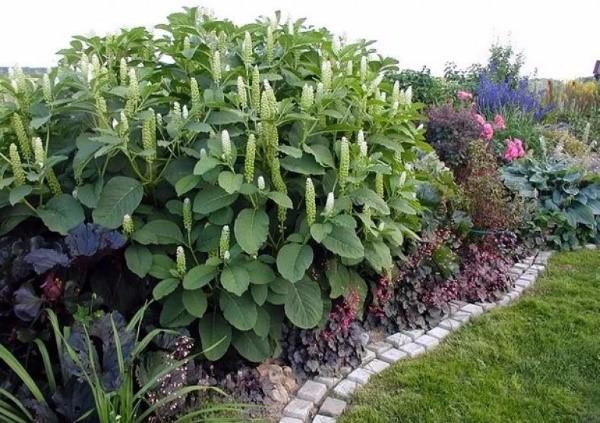 Do you admire the candles of chestnut blossoms, but do not have so much free space on the site for this tree? Then grow lakonos, planting and caring for which does not require undue effort. Of course, this is far from a mighty chestnut, but just a tall herbaceous bush. But its flowering is really very similar to chestnut candles, and the fruits are no less original.

Lakonos is a perennial with a pronounced dormant period, moreover, it is completely unpretentious. Before the flowers bloom, the plant is nothing special. Just think, just a tall weed. But when flowering begins, the bush immediately attracts attention, however, as in the period of fruit ripening. Today we will talk about how a plant looks like and how to grow it in a garden..

Among gardeners, lakonos is also known as oily grass, kermes berry and Jewish ivy. In the scientific literature, it is called phytolacca..

Lakonos grows in the form of a tall and lush herbaceous bush with fairly strong shoots. Their height reaches 2 m, while the branches are covered with pinkish bark as they grow back. The bush branches very well, building up a lush dense crown. And in general, it looks large-scale, given that the length of the leaves is 30 cm. The leaf plates are wide, oval in shape, with a pointed tip. In spring and autumn, they are green, young leaves are brighter. But in the fall, the shrub transforms, and the crown begins to play with crimson shades..

If you rip off a leaf and rub it with your fingers, the scent will not be pleasant. Better to admire the lakonos from afar. 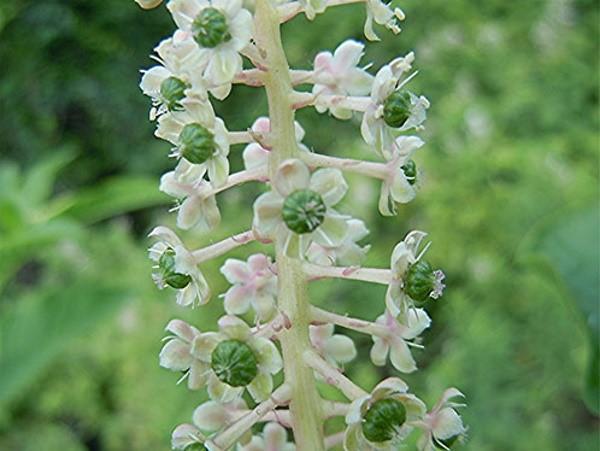 In the middle of summer, long cob-shaped peduncles with small white flowers begin to form. They are similar to chestnut candles, but only thin, up to 25 cm long.The flowering continues until the end of summer, and then the fruits ripen. 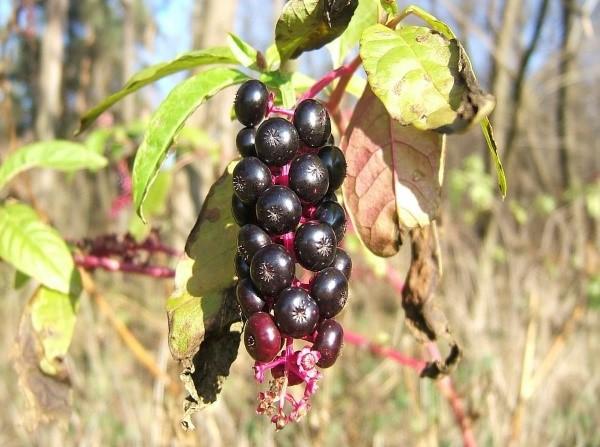 These are small, round and slightly flattened berries. Each consists of 10 lobules with seeds. At first, the berries are light pink, and at the stage of full ripeness they become dark purple, almost black. Red tassels with black fruits look very impressive, and they hang on branches until the first frost.

Lakonos is a unique plant, both useful and a little dangerous. Perennial inflorescences are a good honey plant for bees, but its fruits cannot be eaten due to their toxicity. But the roots of some types of lakonos are often used in folk medicine as a wound healing and bactericidal agent..

The lakonos bush is a perennial, but in winter its aerial part dies off. Only the rhizome overwinters – a thick core that goes deep into the soil, where it is not afraid of frosts. In the spring, the plant recovers, releasing a young growth, including lateral growth, growing on the site.

More than 2 dozen species of this plant grow in natural conditions..

In gardening, however, three laconos are most often found:

Lakonos: planting and caring for a perennial in the garden 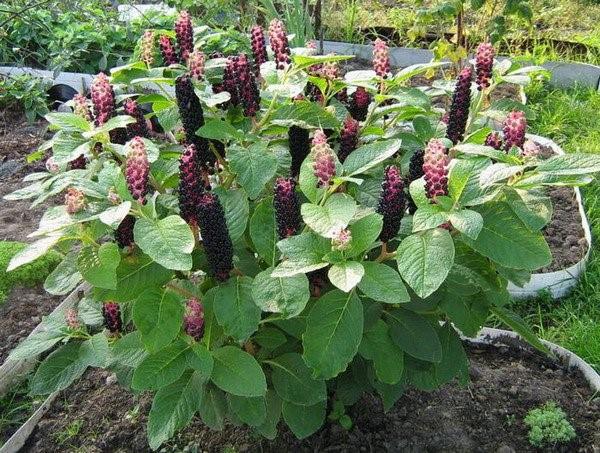 Considering the large size of the perennial, choose a well-lit place in the garden for the lakonos. By the way, in partial shade, the bush will also feel good, but it will not catch up with its comrades growing in the sun in size. But with good lighting, the plant will be taller, and fruiting will come earlier and will be more abundant. But what should be taken care of in advance is the absence of drafts. Peace and comfort are especially important for young plants until they get stronger. But even for adult Lakonos, the wind is useless, since it can break the shoots.

Regarding the soil, then for growing the flower of the lakonos, it must be fertile, preferably black soil with low acidity. However, loams and sandy-peat soil will also work for him. On poor soil, the bushes will be lower, and the foliage will grind. 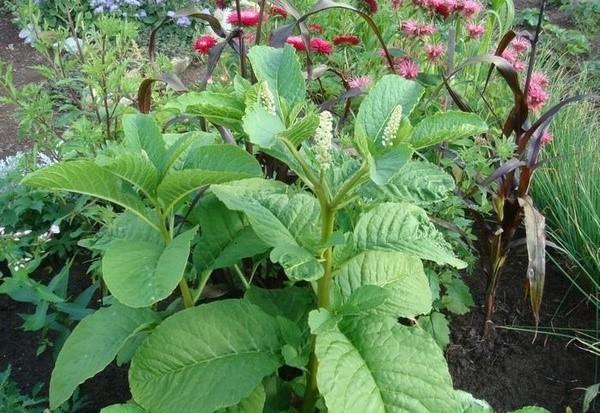 You can sow seeds directly into open ground:

If desired, you can sow lakonos in early spring for seedlings.

Sow the seeds dry in autumn, and for spring planting, it is better to stratify for at least 3 weeks. Then, a day before planting, soak the seeds in water or with the addition of a growth stimulator. This will increase the germination of phytolacca and make it possible to get more seedlings.. 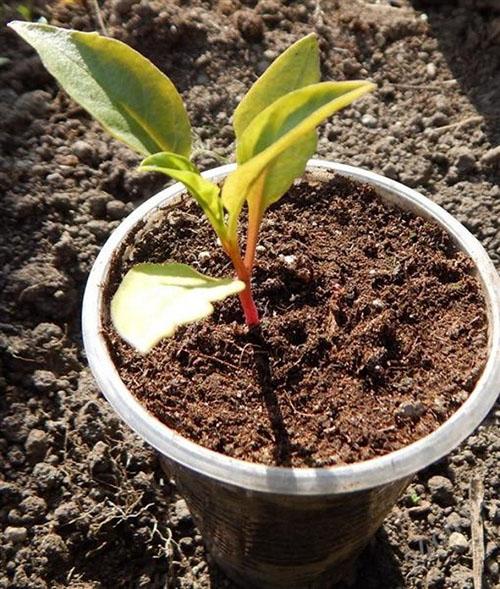 Transplant seedlings to a permanent place no earlier than May, while using the transshipment of plants. Lakonos does not like to be disturbed by the roots. Take this into account when growing seedlings, immediately sowing seeds in separate containers, so as not to dive later. It would be best to use peat or paper cups altogether and plant them in the ground with them..

With regard to the cultural neighborhood, phytolacca is an aggressive plant. It requires a lot of space due to its size, and it grows quickly. Do not plant other crops next to it closer than 2 m from the perennial, otherwise it will drown them out. But there is also a positive point: the lakonos repels many pests. If you plant bushes around the perimeter of the garden, protect your beds, plus decorate the site.

Caring for lakonos in the garden 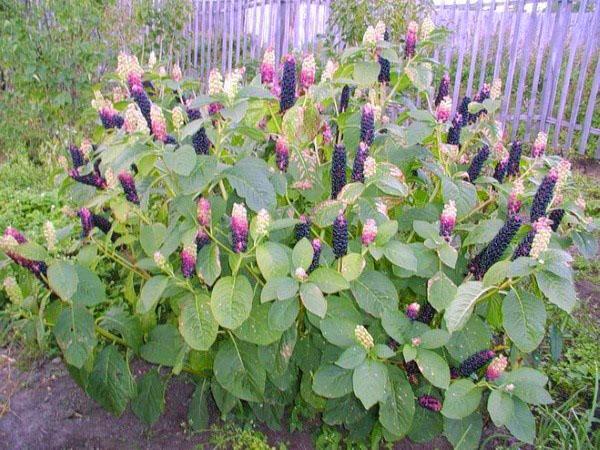 Oily grass is generally unpretentious and will only require your attention in the first few years. While the plants are young and immature, they need help. In the future, the bush will be able to grow practically without your participation..

Caring for a lakonos is simple and consists of the following activities:

For tall varieties of lakonos, it is better to install a support.

Phytolacca propagates by seeds or by dividing the bush. Collect seeds in September-October and sow immediately in the garden. In the spring they will give amicable shoots. But start dividing the bush in the spring, while it is better not to touch the plants older than 5 years. You simply cannot completely dig them up without damaging the powerful taproot, and it will be problematic to separate it..

Thus, planting a lakonos and caring for it will not take much time and will not provide much trouble. An unpretentious perennial is almost independent and will amaze your guests with its bizarre fruits for many years. Not everyone has a similar plant, but let it definitely grow with you!

Unpretentious lakonos in the garden – video