Lush bushes, in which the foliage is practically invisible under the abundance of inflorescences of the most different colors – these are wonderful rejected marigolds. The varieties of these branched plants can differ in both the height and the shape of the inflorescences, but they are all very beautiful. Don’t believe me? Then we propose to get acquainted with the best representatives of the rejected marigolds and find out what they are.. 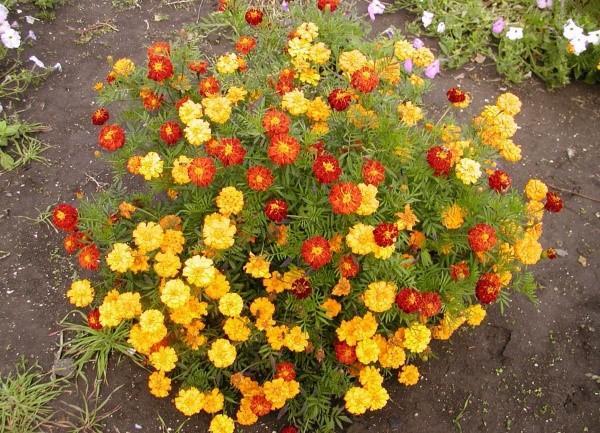 Rejected marigolds are distinguished by increased branching of bushes and abundant flowering. Almost a hundred inflorescences can bloom on one plant, while one stem gives a dozen or more buds. With such an abundance of flowers, it is not surprising that they are small in size: the diameter does not exceed 5 cm. Because of this, marigolds are often called small-flowered. Flowering occurs in the middle of summer.

This variety is also known as French marigolds, although plants, like narrow-leaved black-leaved marigolds, came from distant Mexico. And they are called so thanks to the French Huguenots, who fled from their native country to others and along the way taking seeds.

The bushes themselves stretch quite high and have a peduncle thickened at the top. The average height of marigolds is 40 cm, although there are varieties no more than 30 cm in height or, conversely, almost 60 cm.The leaves are serrate, individual feathers grow together. Lateral shoots begin to grow almost at the very ground, deviating to the sides and making the bushes sprawling. 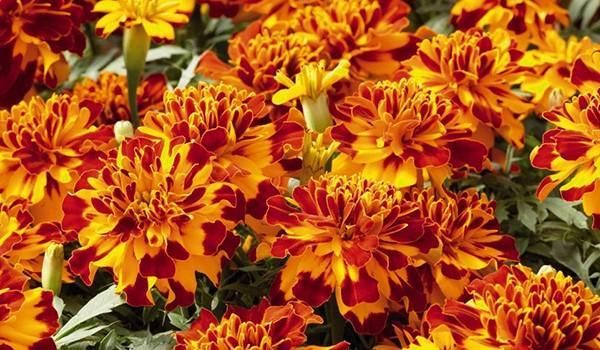 The combination of contrasting colors always looks impressive and marigolds are no exception. The main colors in the color palette of buds are traditionally yellow and red colors. Depending on the variety, they are bizarrely combined and play with tones, emphasizing the beauty of the inflorescences..

Among the variegated marigolds, it is worth noting the following varieties: 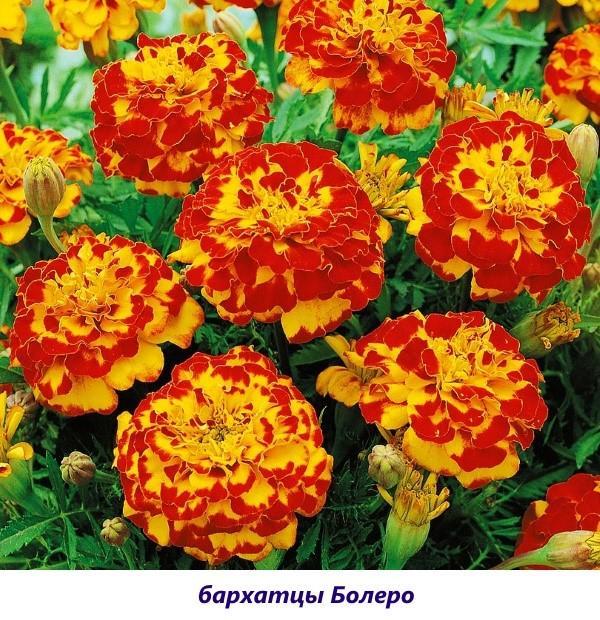 One of the most compact varieties of this group: the height of the bushes does not exceed 20 cm. They are very lush due to active branching, with many small inflorescences. The photo of Bolero marigolds only confirms their variegated beauty. The multi-colored color of the buds directly cuts the eyes with their bright colors. Red-brown buds with yellow-lemon hints will become the main decoration of borders and even flowerpots. The inflorescences themselves are also small, from 3 to 6 cm in diameter, semi-double. Petals bizarrely curve around the edges.

The variety is distinguished by its rapid growth: the first buds bloom within 1.5 months after seed germination.. 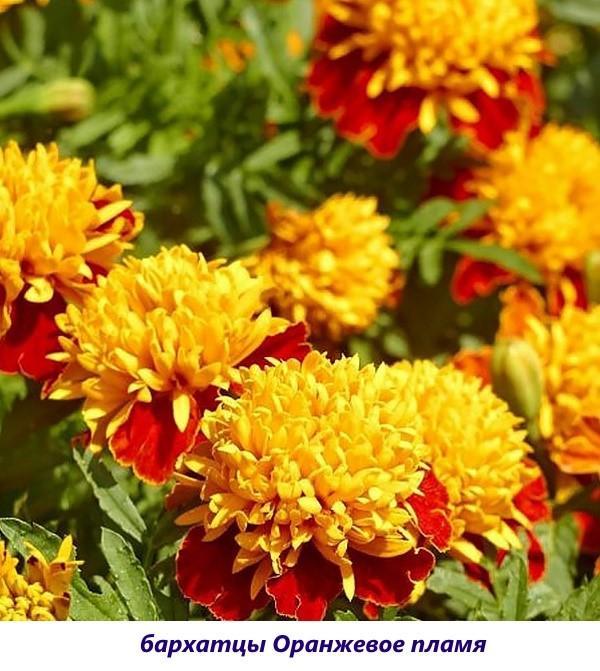 Compact bushes build up a spreading lush crown, stretching no more than 30 cm in height. The variety is distinguished by original flowers, but modest in size. The diameter of the inflorescence is a maximum of 4 cm. But in a frame of red-brown petals, a convex large yellow center rises. Flowering continues until the very frost. 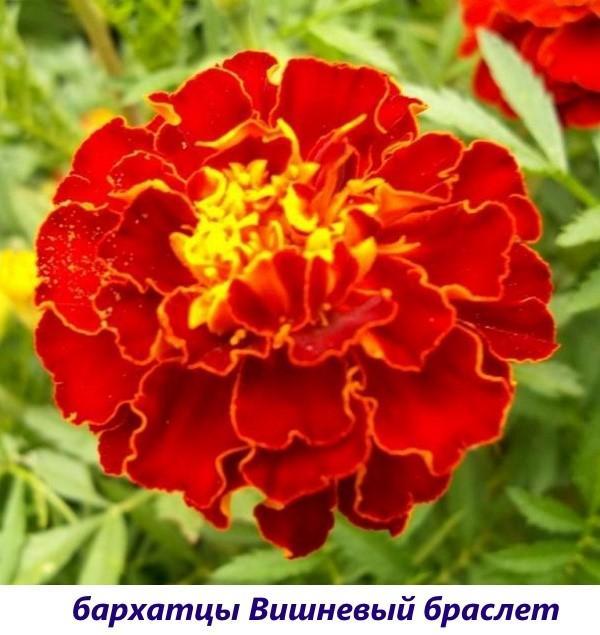 Ideal plant for pots, balconies and carpet plantings. The height of the bush is only 25 cm, but many lateral branches turn it into a lush ball. In group plantings, such spreading plants form a real flower carpet. At the beginning of summer, the bushes are covered with a cap of terry inflorescences with a diameter of about 4 mm. They are colored red-brown, the edges of the petals are surrounded by a yellow border and are beautifully curled. When the petals are half-open, light spots are visible in the center of the flower, resembling glare of light.. 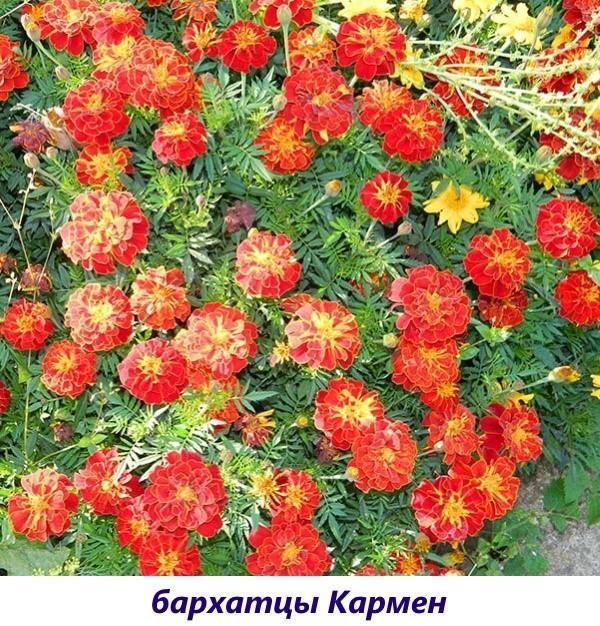 Lush compact bushes do not grow more than 30 cm in height. As for this size, the inflorescences with a diameter of 5 cm seem incredibly large. Against the background of dark green foliage, they are clearly distinguished by their rich brown color. The charm of the flowers is given by a bright yellow spot in the core, which is confirmed by the photo of Carmen marigolds. 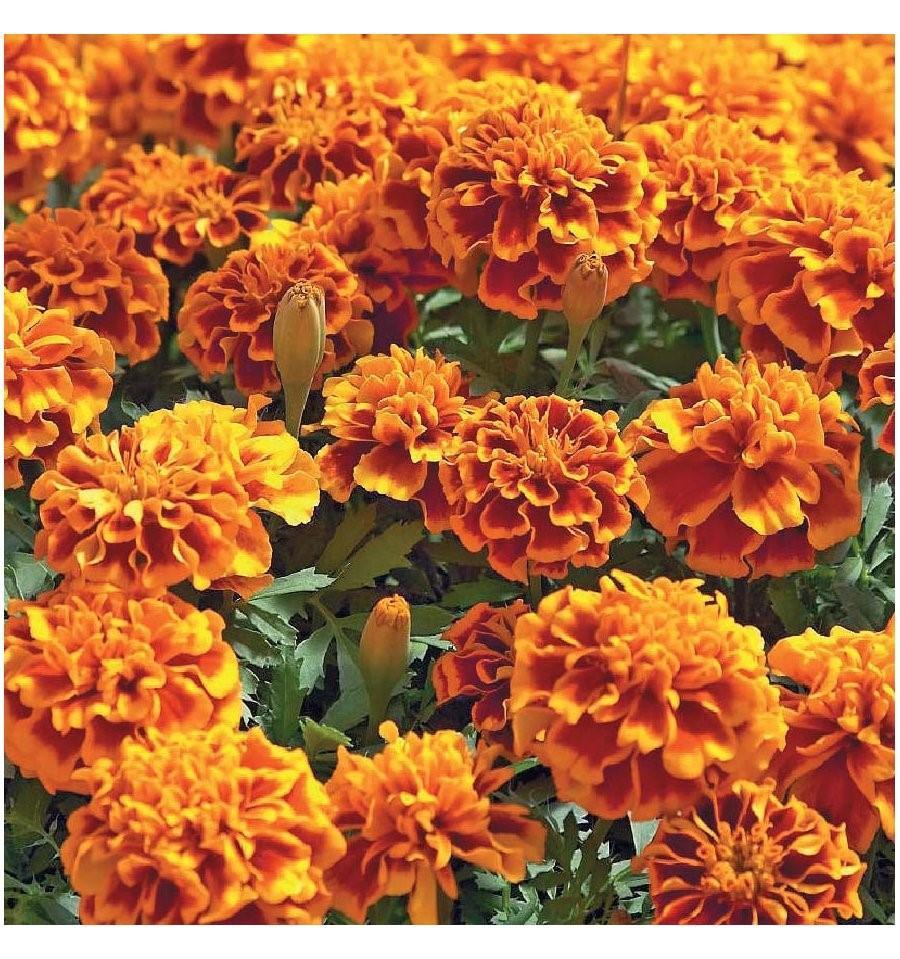 Compact bushes with an average height of 25 cm will delight you with large two-color buds. The diameter of each flower reaches 8 cm.The double petals are red-orange in color, and around the edge are surrounded by a wide golden border.

The plants have a maximum height of 25 m, making them ideal for creating flower borders or flower beds. Such black shaves look beautiful in pots. In the photo of red marigolds Brocada, you can see that they are not monochromatic and not quite red. The middle of the double flower is yellow, and a thin golden border is barely noticeable along the edge of the red-brown petals. Diameter of inflorescences 5 cm.

Quite tall bushes reach 40 cm and branch strongly. However, the highlight of the variety is the pronounced two-tone color of the inflorescences. They consist of one row of simple petals, which are divided into three stripes, approximately equal in width. The outer ones are colored brown, the central one is yellow. The overall composition creates the effect of alternating colors. 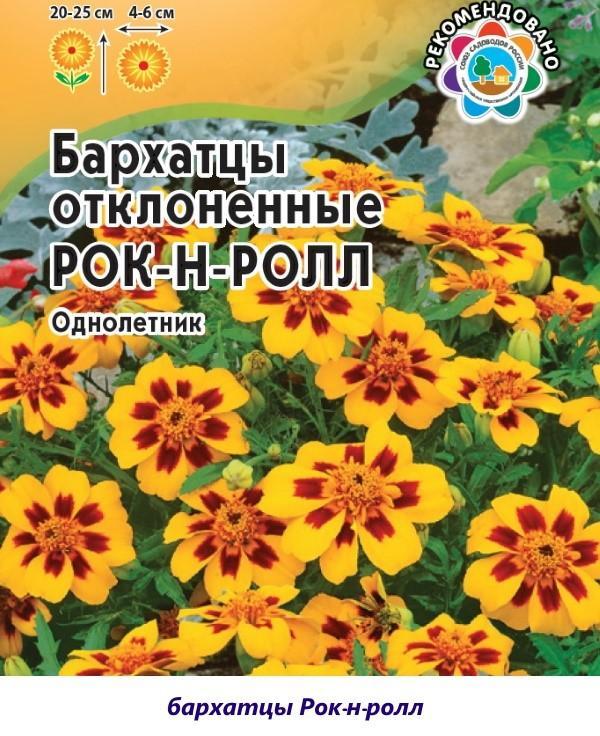 Low-growing, lush bushes do not grow higher than 25 cm in height. But their flowers are quite large and can reach a diameter of 6 cm. The inflorescences are painted bright yellow, but in the middle of each petal there is a bold red-brown stripe. Black-browed blooms throughout the summer. 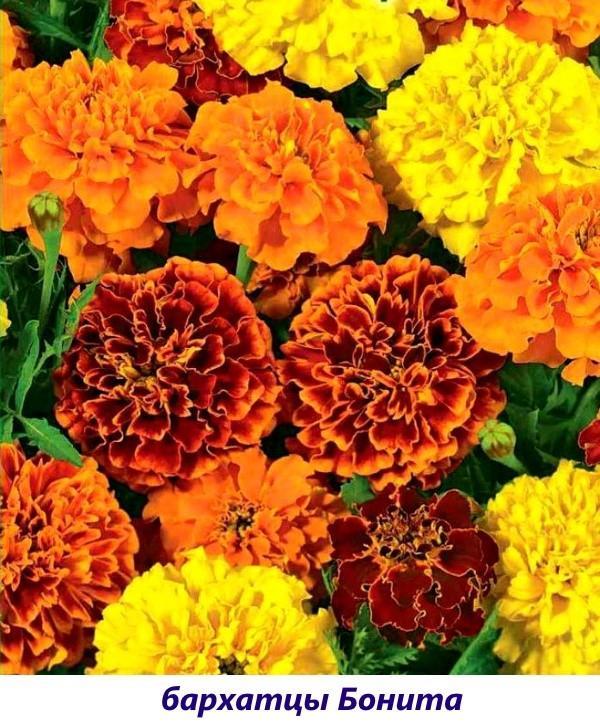 Compact plants up to 30 cm in height are characterized by fast growth and long-term abundant flowering. The bushes are strongly branched and are literally covered with many beautiful double buds 5 cm in diameter. The color of Bonita marigolds is shown in the photo: red, orange or yellow, or a combination of them. Seeds are popular among flower growers; they are presented in the form of a mixture of varieties. One bag contains all types of colors.

Flowering lasts until late autumn, until constant frosts come. Each bud stays on the bush for up to 2 weeks, so the plants bloom continuously. 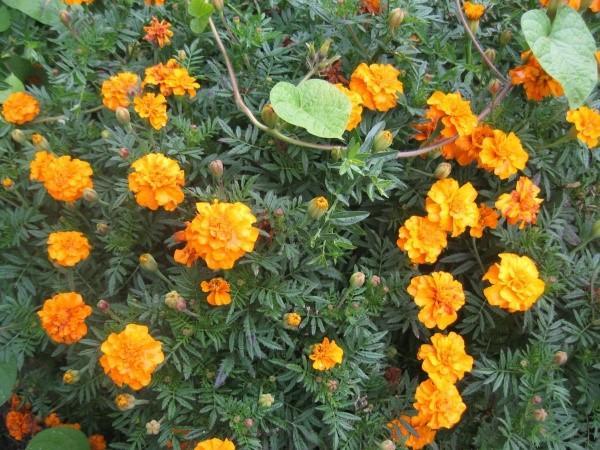 Although the variegation of the inflorescences favorably distinguishes the black shaves in the common flower bed, the bushes with monochromatic buds are no less beautiful. Moreover, the richness and depth of color of some varieties makes them the main decoration of the flower bed. Take at least terry marigolds Lemons – their color is consistent with the name of the variety. Rich yellow, like ripe fruits of indoor lemons (judging by their size). The diameter of each flower is at least 6 mm, which is quite a lot for this species. The bushes themselves up to 30 cm high are distinguished by strongly branched strong stems.

But the Red Devil marigolds are the complete opposite of Lemons. One of the most unusual and spectacular varieties is striking not only in its color, but also in its disproportionate size. On undersized, but spreading, bushes from 15 to 20 cm high, large inflorescences bloom with bloody spots. Their diameter is 9 cm, which is quite a lot even for medium-sized varieties. Terry petals are evenly colored in a rich red-scarlet color.

There are many more varieties of rejected marigolds. Each of them is beautiful in its own way, but one feature is characteristic of all black-shavens. Wherever you plant them, abundant flower hats will not only decorate the site, but also delight with long and fragrant flowering..

Growing marigolds in the garden – video