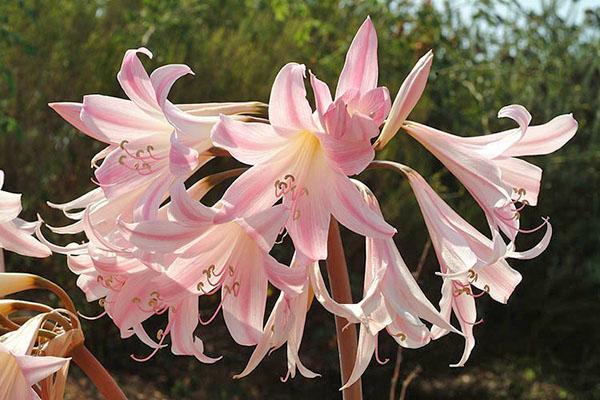 The history of the genus Amaryllis, which is part of the eponymous family of bulbous plants, began in 1753 thanks to Karl Linnaeus. The amaryllis owes its name to the heroine Virgil. Translated from Greek, amarysso means “sparkling”, but at the same time the name of the culture, similar to Amarella, recalls the bitterness and toxicity of the amaryllis bulb.

Despite the attention of the famous botanist, the taxonomy of this genus has been confusing and imperfect for many centuries. In addition to true African amaryllis, as in the photo, plants from the South American continent, similar in appearance, have long been considered to be in the genus. However, with the similarity of the plants, serious differences were revealed in the methods of reproduction and other characteristics of the crops..

It was possible to put an end to the disputes of scientists and finally clarify the classification only at the end of the 20th century..

Only in 1987, the International Congress of Botanists came to the conclusion that it was necessary to revise the division of the Amaryllis family into genera. Today, American species of ornamental bulbous plants are excluded from the genus Amaryllis and form their own genus, Hippeastrum..

Description of amaryllis and their flowering 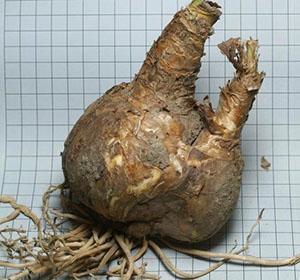 Amaryllis bulbs are quite large, reaching 5–10 cm in diameter. They have an oval or ovoid shape and are covered with thin dried scales. Towards the end of summer, in the southern hemisphere, falling in February – March, a bare peduncle rises above the bulb, with a height of 30 to 60 cm.

The inflorescence at its top consists of several pink flowers, whose funnel-shaped corolla at the time of complete dissolution can reach 10 cm in diameter. In appearance, amaryllis really has a lot in common with hippeastrum..

Flowers are attached in the upper part of the peduncle, 2–20 pieces.

Amaryllis leaves that appear after the wilt of the inflorescence are up to 50 cm long and are located opposite each other at the base of the peduncle.

After pollination, in place of the flower, a fruit-box with amaryllis seeds is formed. 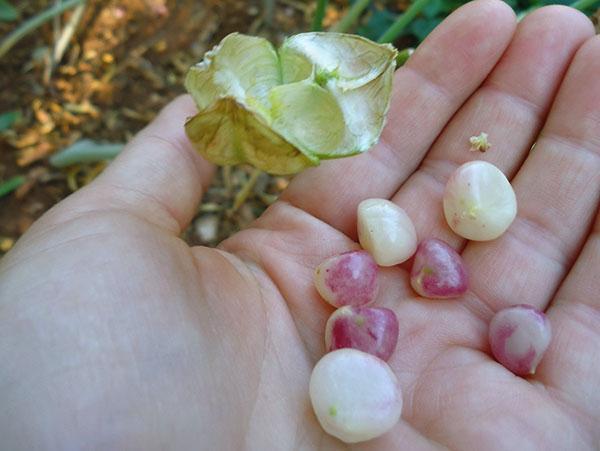 But if in hippeastrum the seeds inside the fruit have a black color and a flattened shape, then in amaryllis under the cover of the capsule there are small bulbs of greenish, whitish or pink color.

Despite these differences, the force of habit is extremely high, therefore, the hippeastrum is still mistakenly called amaryllis..

In order for the culture growing in the house to regularly bloom and produce offspring, it is important to accurately identify a specific specimen and choose the right agricultural technique. 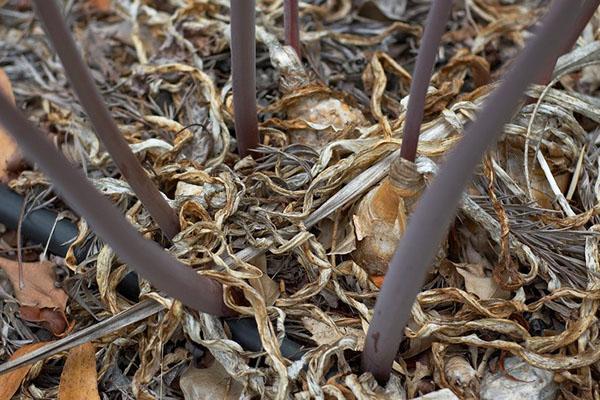 Amaryllis belladonna for more than ten years remained the only species in the genus. But in 1998, another closely related plant was found in his homeland, named Amaryllis paradisicola.

Compared to amaryllis, the paradisicola species has wider grooved leaves, and the maximum number of flowers in an inflorescence can reach 21 versus 12.

In belladonna, the corolla of flowers can vary in color from pale pink to purple or purple..

In the new species, the flowers are uniformly pink, and the saturation of the shade increases as it unfolds..

In addition, when approaching the curtains of amaryllis paradisicol, it is impossible not to feel the strong aroma of flowers, reminiscent of the smell of daffodils, also included in the amaryllis family.. 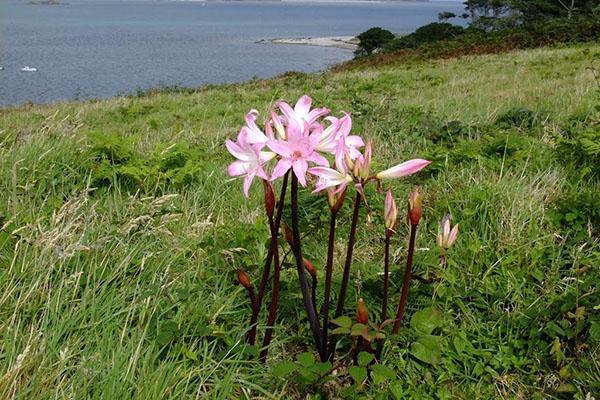 Amaryllis, whether belladonna or paradisicola, is native to South Africa. Moreover, these plants are found in strictly limited areas. For example, amaryllis belladonna is native to the Cape, where it can be seen on the damp coastal slopes. Paradisicola prefers drier, more mountainous areas, often inhabiting rocky outcrops and scree.

Due to the large, heavy seeds, amaryllis of both species naturally form dense clusters. Falling into the ground during the rainy season, the bulbs quickly germinate, creating vast clumps in a very limited area. 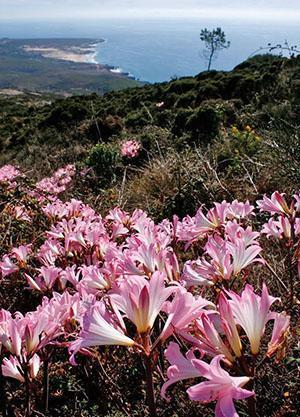 But in the garden and at home, plants tolerate single plantings well. Outdoor cultivation is limited by the low frost resistance of the crop. First of all, frosts affect the leaves of amaryllis and its flowers, but severe frosts damage the bulbs and negatively affect future flowering..

In their homeland, amaryllis bloom after a long dry period ending in March or April. Therefore, the plants are popularly known as Easter lilies, although this culture has an extremely distant relationship with real lilies. Due to the lack of leaves during flowering, amaryllis are called “naked lady”.

The large, aromatic flowers of the amaryllis, as in the photo, attract many insects. During the day, bees are the main pollinators of plants, and at night scoops hover over the pink curtains..

Cultural amaryllis and their hybrids 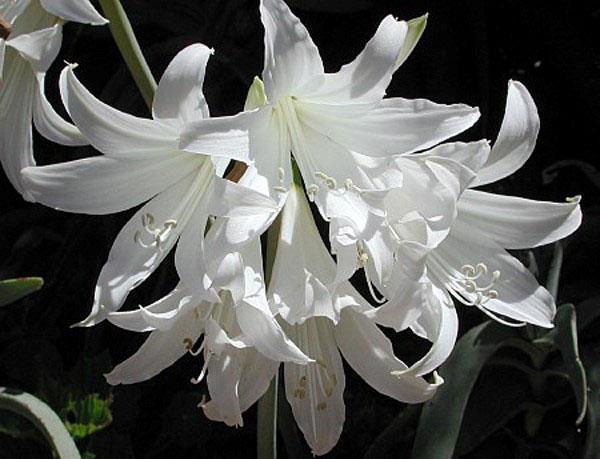 The belladonna species was domesticated in the early 1700s. Amaryllis bulbs were exported to England, then to the south of Australia and to America. It was on the territory of Australia, at the beginning of the 19th century, that hybrid plants were first obtained. Today, it is no longer possible to find out their nature, but they became the basis for obtaining amaryllis, the colors of which differ from natural.

At the disposal of flower growers are plants that reveal corollas of purple, peach, almost red and even completely white shades..

In white amaryllis, in the photo, in contrast to the pink varieties, the stems are completely green and do not have a bluish or purple tint. Modern breeders have obtained plants with corollas, which are decorated with stripes and veins, which have beautifully darkened edges or have light yellow centers. Unlike wild amaryllis, cultivated varieties often form a hemispherical inflorescence. 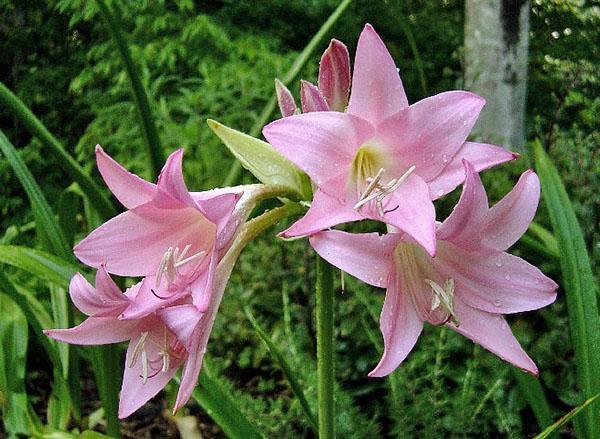 The amaryllis belladonna species has already been used in our time for crossing with Murray’s crinum. The resulting hybrid species was named Amarcrinum. And today the plant gives amazingly beautiful and diverse varieties.. 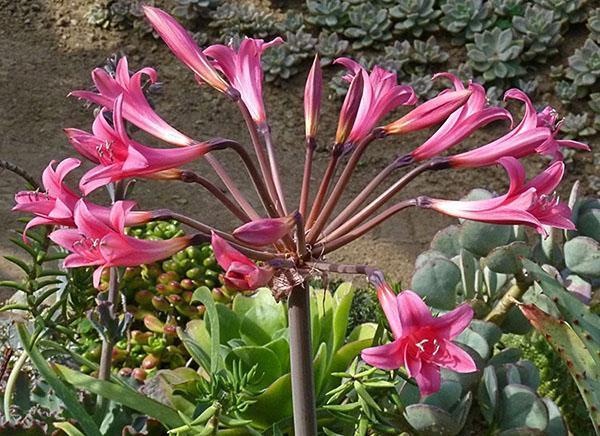 Another amaryllis hybrid is obtained by crossing with Josephine’s brunswigia. It was called Amarygia.. 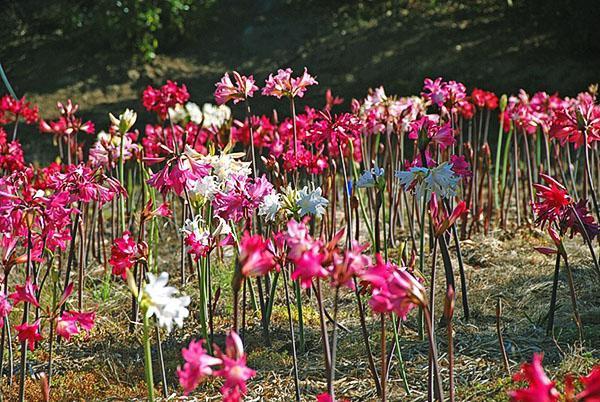 Amaryllis are not only beautiful. They can be dangerous to people caring for them and pets..

In the bulbs of amaryllis, its leaves and stems, there are toxic compounds, including amaryllidine, phenanthridine, licorin and other alkaloids, when ingested, a person experiences: 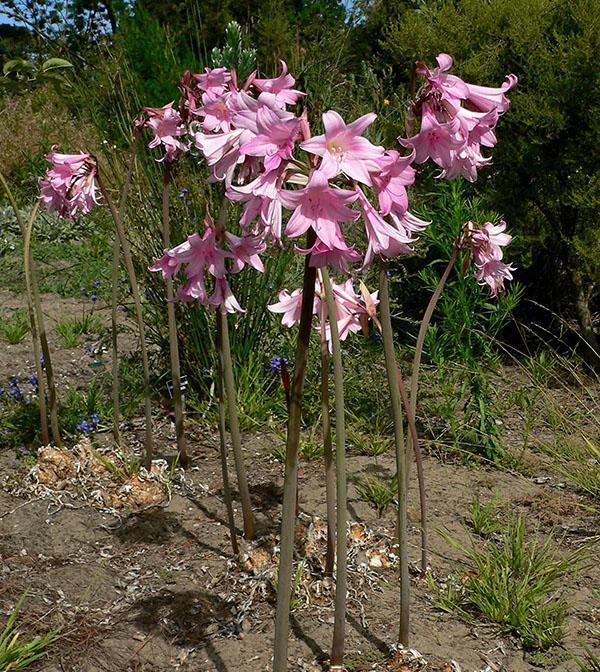 The concentration of toxic substances is low. Therefore, for an adult, the plant is insignificantly dangerous, but for children and pets, amaryllis is poisonous. At the first signs of illness and suspicion of the ingress of a bulb or green plant into the intestinal tract, you should consult a doctor.

A serious stage of poisoning threatens with respiratory arrest and a negative effect on the nervous system. Most often, this problem affects livestock, for example, goats and cows grazing near flower beds..

The toxicity of amaryllis also affects those who suffer from contact dermatitis. The sap of the plant can irritate the skin, so it is safer to work with gloves..

Video about the beautiful amaryllis