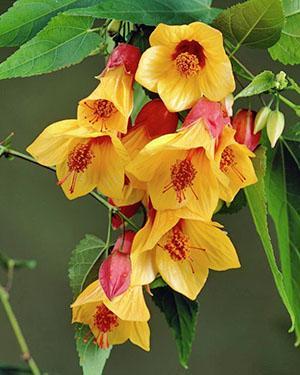 For many growers, abutilon becomes the embodiment of the dream of an ideal indoor plant, combining unpretentiousness, long colorful flowering, high growth rate and easy offspring..

With a lot of advantages, the main thing that pays attention to the plant is single or paired flowers that appear in the axils and for many months forming a lush cap on the bush. At home, abutilon is a large perennial shrub up to two or three meters high. Being the closest relative of the well-known Russian mallow or marshmallow, abutilone in the difficult climatic conditions of our country can be grown only as a potted crop. But even in this form, the plant, named for the characteristic shape of the leaves “home maple”, shows all its best qualities. 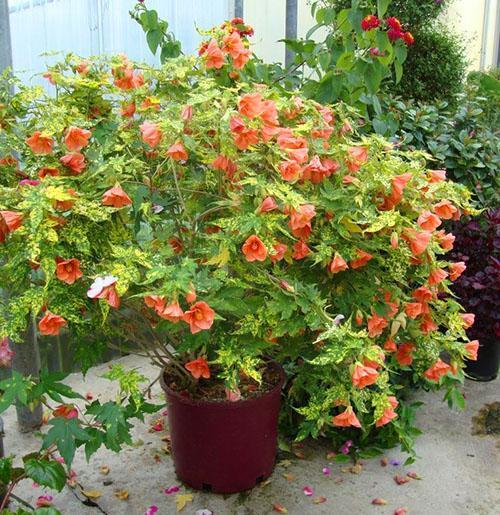 At home, abutilone grows rapidly and in a few years can turn into a large tree or bush. So that the green pet does not occupy the living space that people need, it is better to grow abutilons of hybrid origin in the apartment with a more compact crown and large cup-shaped flowers of different colors.

What are the conditions for keeping such an unusual houseplant? And what is the care of abutilon, so that from spring to late autumn bright flowers-bells flaunted on it? 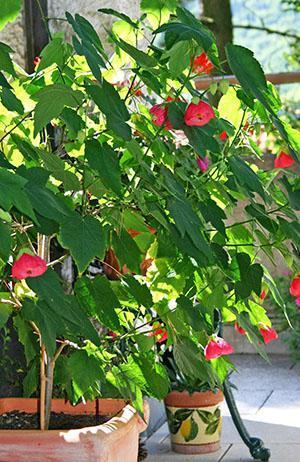 Despite the southern origin of the culture, being in the constantly warm air of an apartment is not at all useful for Abutilon. In nature, it grows in areas where the difference between winter and summer temperatures is about 10 degrees. That is why the cable car or “home maple” can often be found in winter gardens or greenhouses, and at home, abutilon is at a temperature:

If the plant is taken out on a veranda or loggia, it must be remembered that when the temperature of the abutilone content falls below 5-10 ° C, it begins to experience serious discomfort. And with a long stay in cold air, the culture sheds foliage. Subzero temperatures and exposure to drafts are extremely dangerous for the plant. However, cold is not the only enemy of abutilon..

If the air warms up to 30 ° C, you can expect the plant to stop forming buds and even shed existing ones. You can help the abutilone suffering from high temperature content by regularly spraying the aerial part of the plant. To do this, use only warm soft water..

In winter, when heating devices affect the air quality in the room, a screen made of non-woven material or film that protects the window sill from the living space will become a good protection against heat.. 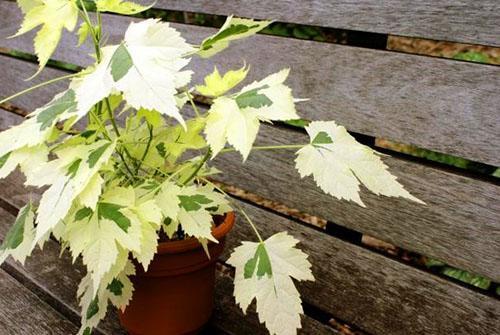 Abutilon is photophilous, and at home it needs bright diffused lighting, but not harmful to foliage. If there is not enough light, you should not wait for abundant flowering. When growing abutilone with variegated or almost white foliage, it is more correct to shade the plant a little in order to maintain a unique pattern on the leaves..

At home, abutilones feel great on windowsills facing east, southeast, west or southwest. The south windows cannot do without protection from the midday sun, and the north side will not provide the required amount of light. The quality of lighting directly affects how compact the crown of the plant will turn out, because in the shade the shoots noticeably lengthen, the foliage thins, the formation and pruning of abutilone becomes more difficult.

On summer days, abutilon reacts perfectly to being on a sunny veranda or balcony, and sometimes plants are successfully transferred to the garden or even transplanted into open ground.

In this case, choose a quiet area in partial shade, and also make sure that the abutilone is kept at a temperature within the limits described above. In the fresh air, the pet grows well and blooms, and when it gets cold, it can be protected with a cover made of covering material.

Features of watering when caring for abutilon 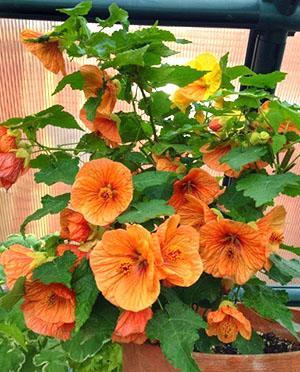 Abutilons willingly “drink” at home, which is especially noticeable on hot summer days, as well as in the warm dry air of a room where heating works. A delay in watering during the active growing season necessarily leads to wilting of the foliage, and in some cases even to the loss of buds and the death of the peripheral root system. The plant should not dry out. And the optimal interval between waterings is considered when the soil surface dries up a little..

However, in caring for abutil, it is better to focus on the condition of the plant, the size of the pot in which it is located and the temperature of the content. A small volume of soil loses moisture faster than soil in a large pot. And in the dry air of a heated room, the moisture content of the substrate drops much more sharply than when the pet is in the front garden. Much also depends on the composition of the soil..

Watering abutilon at home is only necessary with warm settled or melt water.

If the plant is satisfied with a cool winter, it needs to be watered much less often, otherwise the moisture not demanded by abutilon will cause rot on the roots.

Soil selection and transplantation of abutilon 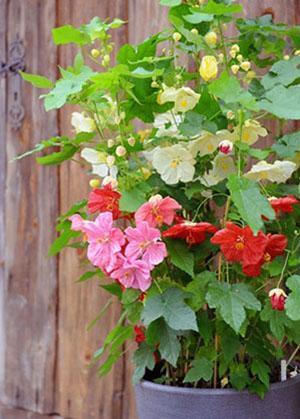 The main requirement for the soil for growing abutilon is good moisture and air permeability. Therefore, as a substrate, you can use a universal soil for indoor crops, flavored with substances that loosen the soil. It can be sand, perlite or vermiculite..

If components of natural origin are added to the mixture, for example, humus or sod soil, they must be disinfected in order to exclude the possibility of pests and pathogenic fungi entering the pot..

The soil for growing abutilone should be neutral, loose and light. But even with a high-quality substrate, flower growers sometimes complain about the meager flowering of the culture. This is due to the wrong choice of pot.. 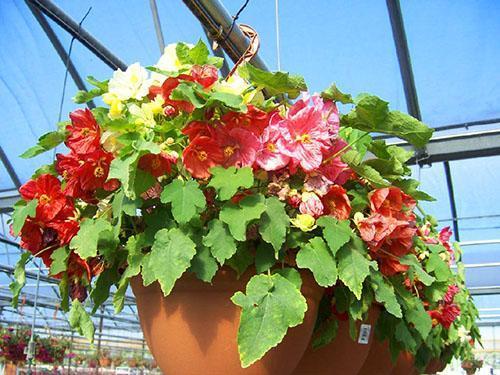 A fast-growing plant with good potential greedily assimilates the soil ball, but during the development of the root system, abutilone practically does not bloom. Therefore, it is better to plant a young specimen in a container with a diameter of no more than 9-10 cm, and then, as part of caring for abutilon, it is transferred into a pot a little more in the spring.

The need for transplanting is indicated by an earthen lump completely hidden under the cobweb of roots, as well as extremely fast absorption of moisture during watering.

When and how to fertilize abutilone? 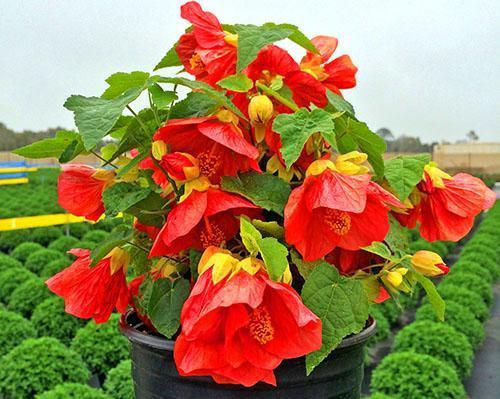 The rapid development of the green part of the plant and active flowering are the reasons that abutilone must be fed at home. In spring and until autumn, feeding is carried out every two weeks, alternating mineral and organic fertilizers. The clearer the feeding schedule is followed, the longer and more abundant abutilone blooms..

The concentration of fertilizers for abutilon may be less than in the instructions for the selected composition, but at the same time, you need to feed the flower a little more often. At the time of mass flowering, it is better to fertilize abutilone with products with a high content of phosphorus and potassium, which have a positive effect on the formation of buds. When, after pruning, abutilone should quickly overgrow with new foliage, it is more correct to use preparations with nitrogen.

Sometimes growers notice that the number of flowers decreases, and the foliage of the well-cared abutilone becomes discolored, yellow and loses its attractiveness. These symptoms indicate a lack of trace elements. To prevent the development of chlorosis, the pet is fed, for example, “Izumrud”, which helps to quickly return decorativeness and brightness to the leaves. 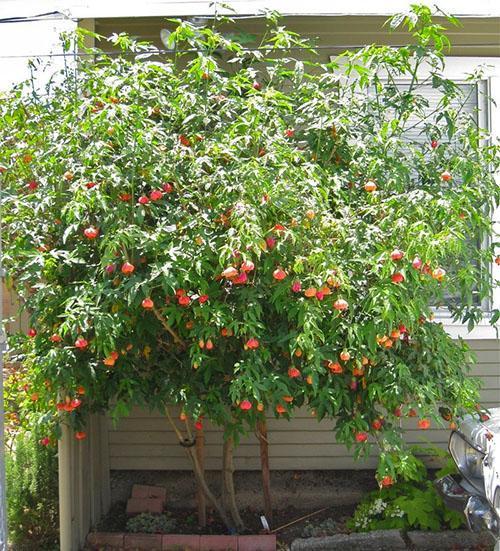 Depending on the variety chosen for growing, abutilon in an apartment can form a crown up to one and a half meters high. If you do not use pruning, abutilone loses its shape in a couple of years, the bush falls apart, and flowers are formed only at the ends of the shoots.

To form a compact bush or standard tree, you cannot do without pruning. Shoots are cut and pinched in autumn and spring to half or a third of the original length.

Even strong pruning abutilone tolerates well, and the greens are completely restored in a few weeks. In addition to the fact that with the help of this procedure it is possible to control the volume of the crown, the plant is renewed after pruning..

If abutilone grew in the garden in the summer, its overgrown root system is also pruned in the fall, which allows the bush to be returned to its original pot.

After flowering, be sure to cut off already faded shoots, all damaged or dried branches. During such abutilon care, you should not leave parts of the crown that shade it, making it thick and tangled. In the spring, before the buds appear, the shape of the crown is corrected again.

If you have to trim a young plant, pinch the main shoot at a height of 15-30 cm from the ground level. And the next time, the shoots of the second order are shortened in the same way. When home-grown abutilone is to become a miniature tree, in the early years it is useful to use supports for the stability of the stem, especially during a set of buds. 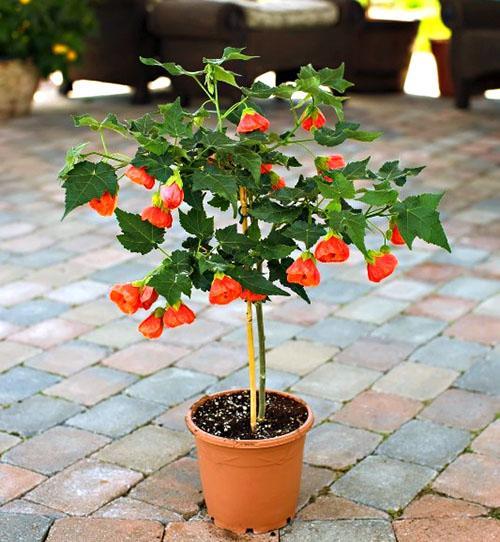 Pruning causes the dormant buds to awaken and form lateral branches onto which buds form. The more carefully the crown shaping is carried out, the more abundant the flowering will be in the coming season. And after pruning, abutilone is fed. A video about caring for abutilone at home will help you visually get acquainted with the peculiarities of culture and how it is treated. 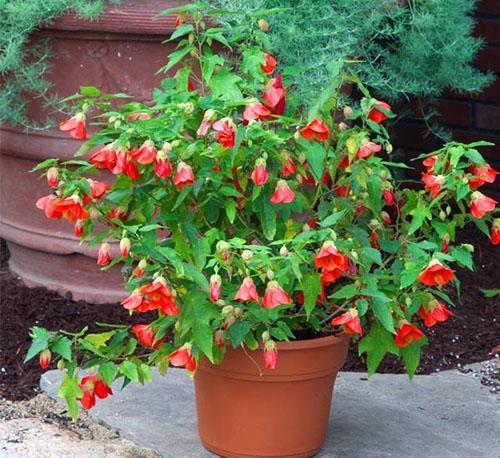 If the care of abutilon is not given due attention, the florist may face the appearance of such dangerous diseases and pests as root rot, mealybugs, aphids, spider mites and scale insects. For prevention, be sure to support competent watering, humidify the air and remove fallen flowers and leaves.

Falling buds, yellowness and wilting of the foliage of abutilone signal:

The lack of light and the lack of fertilizers, when they are especially needed – during the spring and summer growing season, affect the appearance of the plant and its flowering not in the best way..