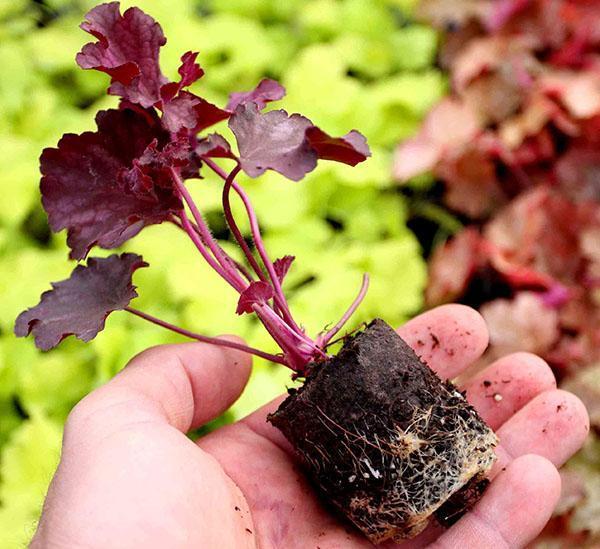 It is hard to believe, but there are decorative deciduous plants that can outshine the most spectacular flowers with the brightness of greenery. Will take that – geychera, planting and care in the open field for which is quite simple and available to summer residents in many regions of Russia.

Description of heuchera for open ground 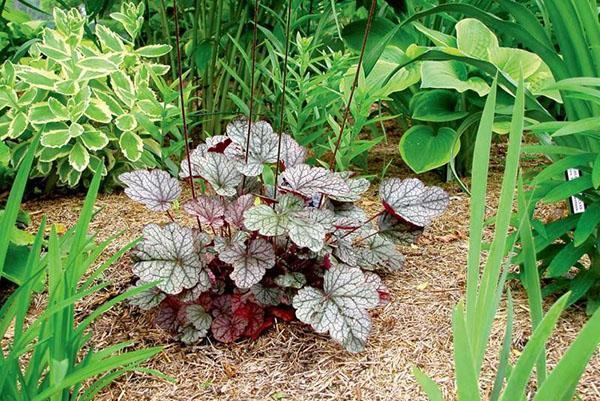 All species of Heuchera that exist in nature are from the American continent. Here plants from the Stonefragment family, justifying their origin, settled in the rocky wastelands of the center and south of the United States and some part of Mexico. Most of the plants domesticated by humans are perennial decorative deciduous crops. According to the description, in the open ground, heuchera, forming a lush rosette of split finger-like leaves, changes their color depending on the season, miraculously transforming the corner of the garden allotted to it.

The appearance of the foliage depends not only on the season, but also on the type of heuchera. With bicolor or tri-colored leaves with jagged, smooth or corrugated edges, you can transform the most inconspicuous area.

The decorative effect complements the flowering that lasts all summer. The brightest inflorescences on erect peduncles in Heuchera are blood-red with small corollas of a coral shade. In other species, flowers are predominantly white or pinkish, collected in sparse paniculate inflorescences..

When to plant Heuchera outdoors? What you need to know about the nature of the plant and its preferences?

Conditions for growing heuchera in the open field 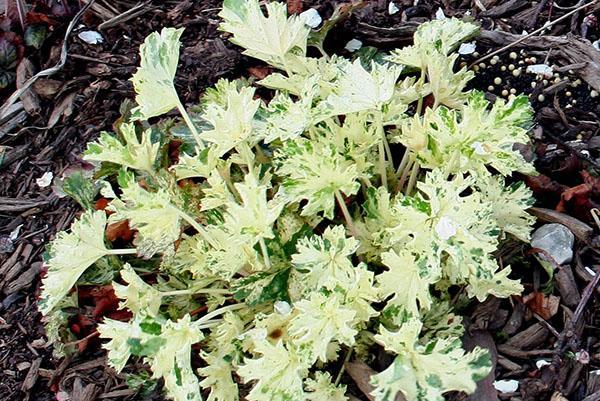 Usually, for decorative deciduous plants, well-lit places are chosen where bright colors on the leaves will look most advantageous. However, heuchera can easily settle down under the crowns of trees, and in an open area it can wither and will require frequent abundant watering. Therefore, it is better for her to find an area with light protection from the scorching midday sun, but not in a thick shade that will “wash away” unusual patterns from the leaves, leaving only a green background..

The requirement for sufficient illumination is especially important when planting in open ground and caring for variegated Heuchera.

Despite its bright appearance, this perennial is unpretentious and, with proper care, grows well in summer cottages. In plantings, Heuchera often coexists with hosts, conifers, herbaceous ground cover plants and shrubs, as well as tall flowering species.

When planting and nursing in the open field, perennial heucheras are not pretentious to the composition and nutritional value of the soil, but they do not tolerate:

Plants are especially lush on a loose substrate that retains a moderate amount of moisture well.. 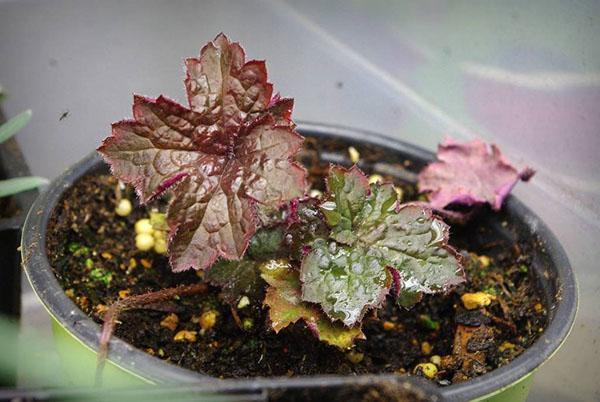 In nature, heucheras reproduce by seeds and vegetatively due to the growth of leaf rosettes. In the garden, it is better to use the second method..

Unfortunately, the seeds collected from garden varieties do not retain the varietal characteristics of plants, and plants close to wild-growing ones grow from them..

It is much easier to get Heuchera of the desired variety – using seedlings grown and seeds from a trusted manufacturer or dividing an adult outlet.

Seeds are sown in early spring in containers. In greenhouse conditions, the first shoots appear in 4-6 weeks. When real leaves open on the sprouts, the plant is transferred to open ground. Taking into account future growth, the sockets are planted at a distance of 20 cm from each other.

In May or early autumn, large, usually 3-4 year old heuchera rosettes are planted, which lose their compactness and fall apart. This means that daughter plants have appeared near the main plant, and it is time to separate them..

Planting perennial heuchera in open ground and caring for plants 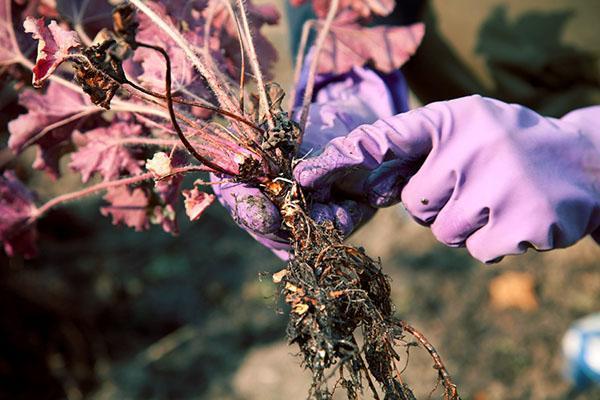 To make the new plants more “fluffy”, 2-3 rosettes with their own rhizomes are left on each plot. If for some reason the planting material has no roots, you should not throw it away. Cuttings with several leaves and a piece of stem can be rooted by treating with a stimulant and planting in a sand and peat mixture. In a shaded greenhouse, roots form in 3-4 weeks.

If cuttings are obtained in May or June, the time for planting Heuchera in open ground is in the middle or second half of summer. The soil under such plants must be mulched, and the seedlings themselves provide protection from the bright sun.

On cuttings and large cuttings, the places of the cuts are powdered with crushed charcoal. Planting pits under the Heuchera must have a depth of at least 30 cm and the same diameter. When this crop is used as a curb, the distance between the bushes is usually 25–35 cm.. 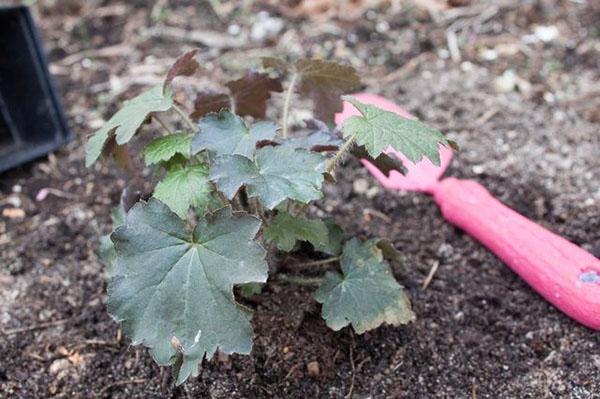 After planting, the plants are watered, and the soil under them is sprinkled with peat, rotted sawdust or chopped grass.

Care for Heuchera after planting in open ground 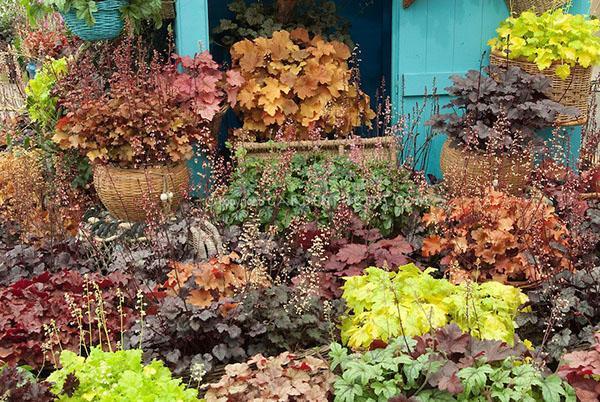 These plants are hygrophilous. Therefore, the main care for Heuchera after planting in the open field includes:

In the warm season, geychers are watered 3-5 times a week. In the heat and in the absence of rain, it is better to moisten the soil daily in the morning or after sunset.

So that no discolored burn marks remain on the leaves of the heuchera, the watering can should be kept as close to the ground as possible..

All plants of this genus bloom, but heuchera flowers are not always too attractive. If they interfere with the perception of the flower garden, or after wilting, the peduncles are removed by cutting off under the base. For the winter, the bushes leave with leaves. So that by spring the bases of the rosettes do not suffer from decay, it is better to cover them with loose spruce branches, oak branches, non-woven material and mulch.

All interesting about geykher – video