An exquisite plant yasnotka – an amazing find for a summer cottage 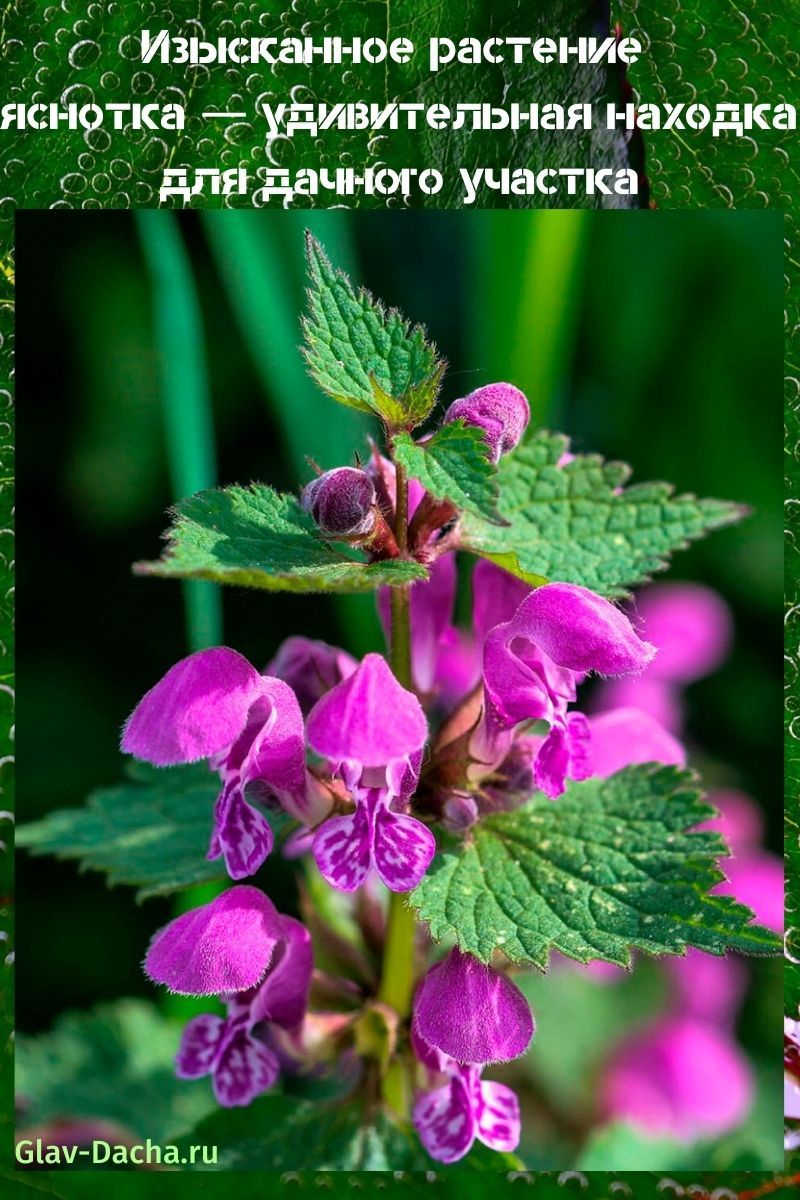 The plant belongs to lush ground cover grasses. Landscape designers are happy to include it in their compositions. In its natural environment, culture grows in Europe, Asia, as well as northern Africa. Biologists count a huge number of varieties of grass. All of them are striking in their uniqueness, especially with a more detailed study. Let’s go to the “Valley of Flowers” to get to know the culture better. 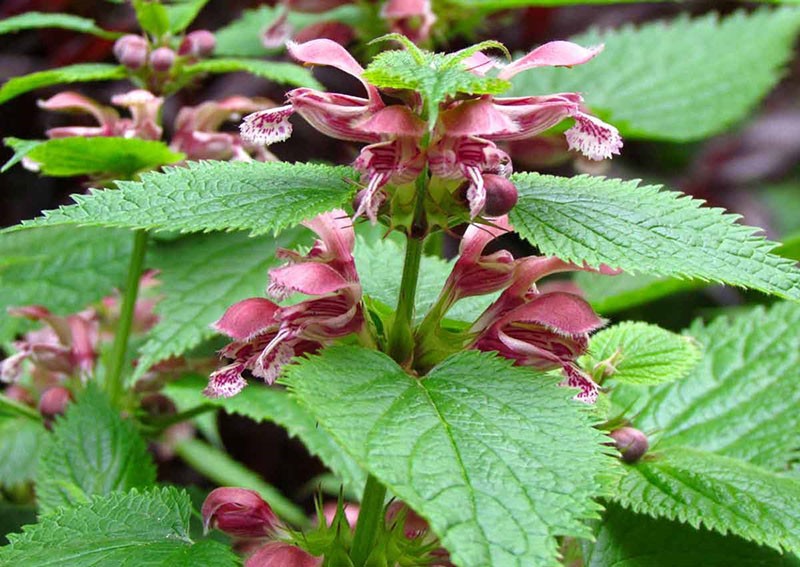 Perennial grass has creeping shoots that can take root with knots. Thanks to this, it quickly captures free territory on the lawn or flower bed. The highlight of the culture are ovoid leaf plates with a pointed tip. They are painted in dark emerald color. The upper part is decorated with a marble pattern or a silvery sheen. The edges are crowned with a scalloped frame. Leaves sit on dense stalks. 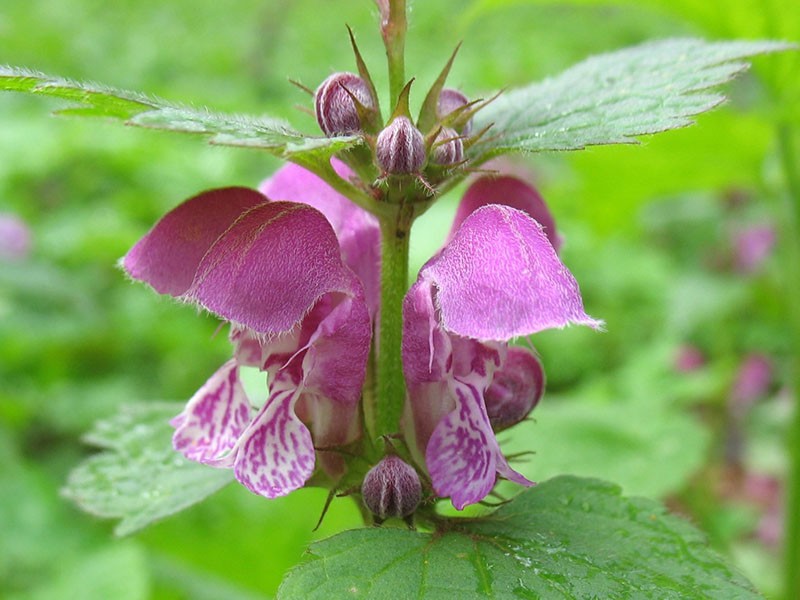 In late spring, early summer, spongy buds appear among the lush greenery. They sit on erect peduncles, up to about 30 cm high.

Depending on the variety, the petals are painted in these colors:

After successful pollination, fruits appear in place of the buds. They resemble small nuts, collected in graceful bouquets. Seed material is stored inside, capable of giving “life” to a new generation of beetles. In nature, scientists have more than 40 varieties of culture. However, only a few of them are used in horticulture. Consider the most popular options. 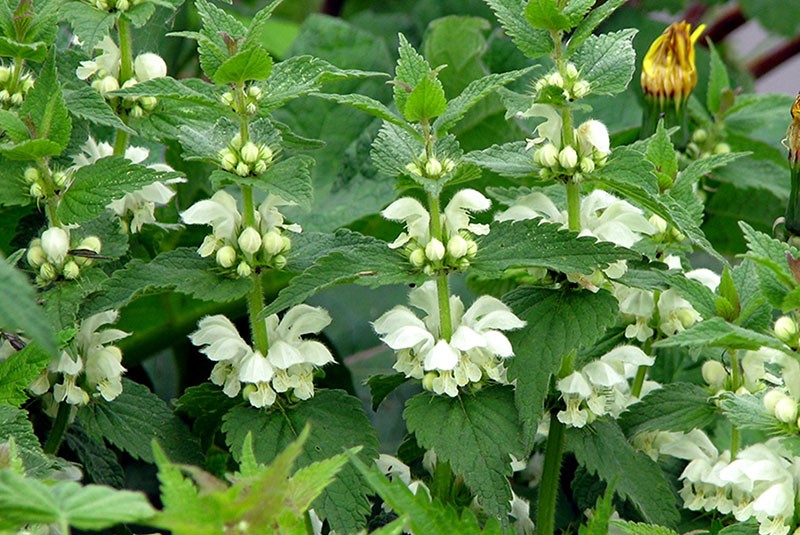 The plant is often called blind nettle because it looks like it. In fact, this is how the mimicry of the lucid works – the unique natural ability to impersonate someone else. Thus, the grass scares away its potential enemies. However, its foliage does not contain scalding agents and does not hurt the flesh. On the contrary, it is very tender and soft. Culture is easily identified after touching it with bare hands. 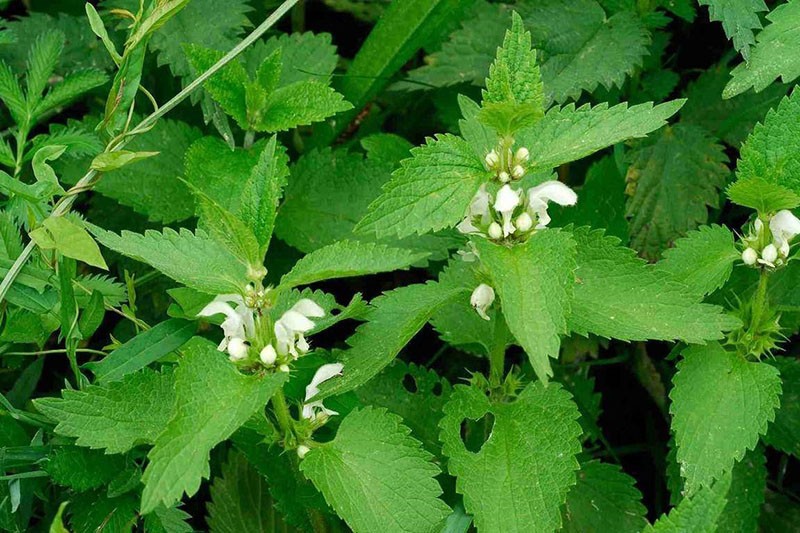 The variety wonderfully takes root in the fertile land of the backyard, thanks to its long and creeping rhizome. White lamb has a low stem with a hollow structure. Its height is in the range of 15-45 cm. It has ovoid or heart-shaped leaves strung on it. In the axils of the plates, double-lipped buds are formed. The petals are painted in snow-white color. A heady aroma emanates from them. Flowering begins in April and lasts until early October. The crop variety bears egg-shaped fruits in the form of gray-yellow nuts.

In its natural environment, the white grass grows near rivers, streams, lakes and on forest edges. 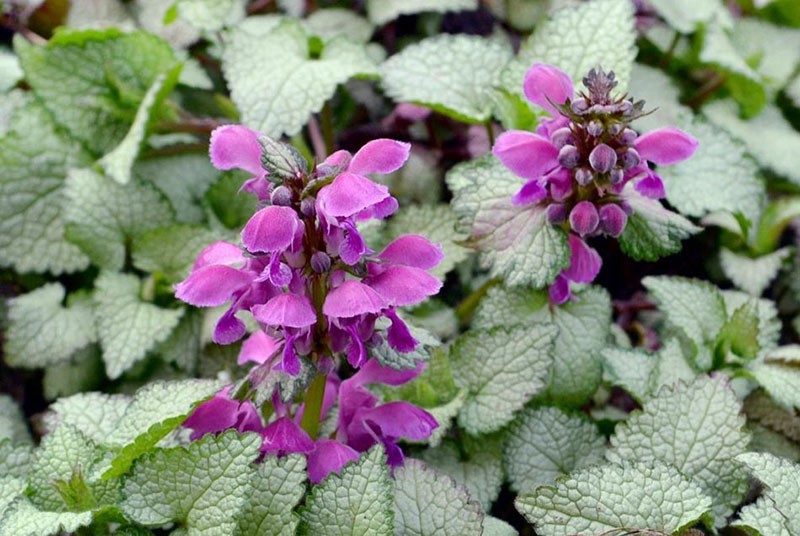 Spotted lamb, as the variety is also called, grows to a maximum of 70 cm. It has erect shoots that branch only at the base. In the lower part there is a surface type rhizome. Thanks to this, the crop is grown on lawns as a ground cover crop.. 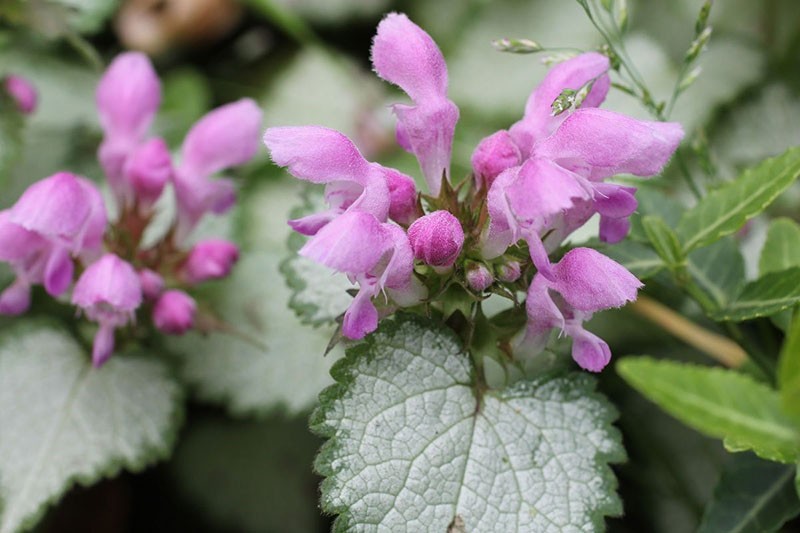 The plant blooms from May to October. Spongy buds of purple or light pink color appear among the greens. Their scent attracts bees and other insects. On the basis of the variety, original varieties were bred: “Album”, “Aurerum”, “Beacon Silver”. 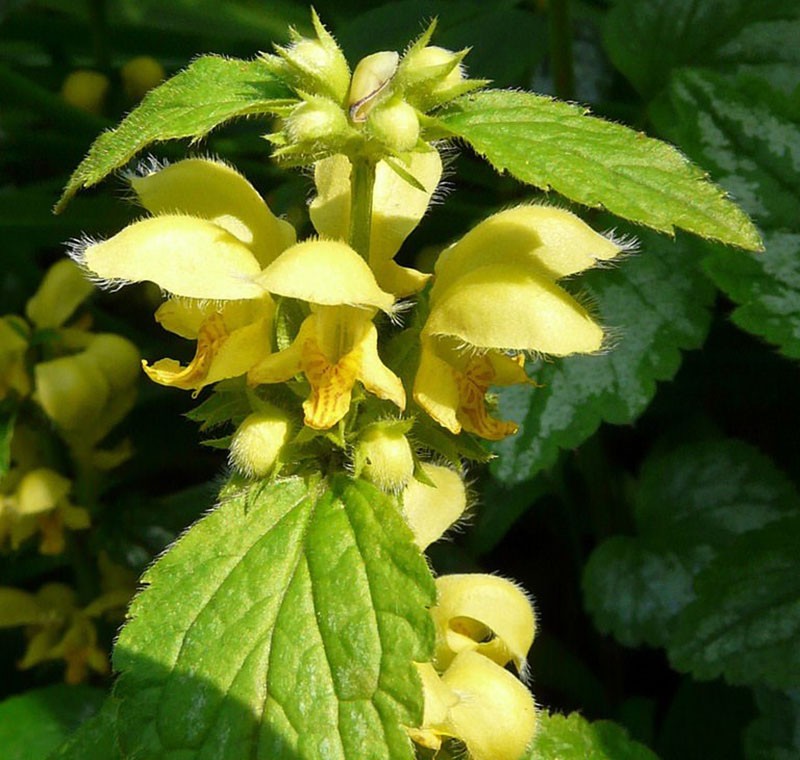 The culture is distinguished by adjoining shoots of a fine structure. They are abundantly covered with delicate villi. The surface of the sheet plates is decorated with a marble pattern. During flowering, yellow buds bloom on Zelenchukovaya. They replace each other throughout the summer until the first month of autumn.. 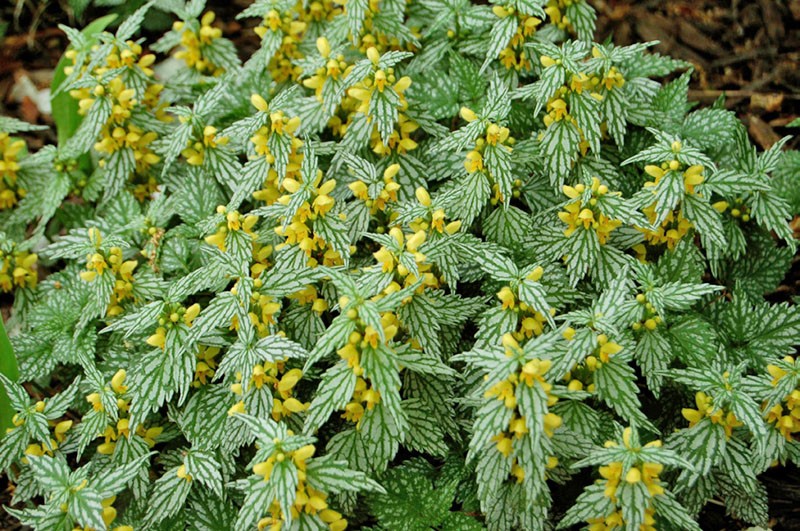 Popular varieties are the dwarf version of the “Silver Carpet”, as well as the culture with the original silver frame of foliage – “Argentatum”. 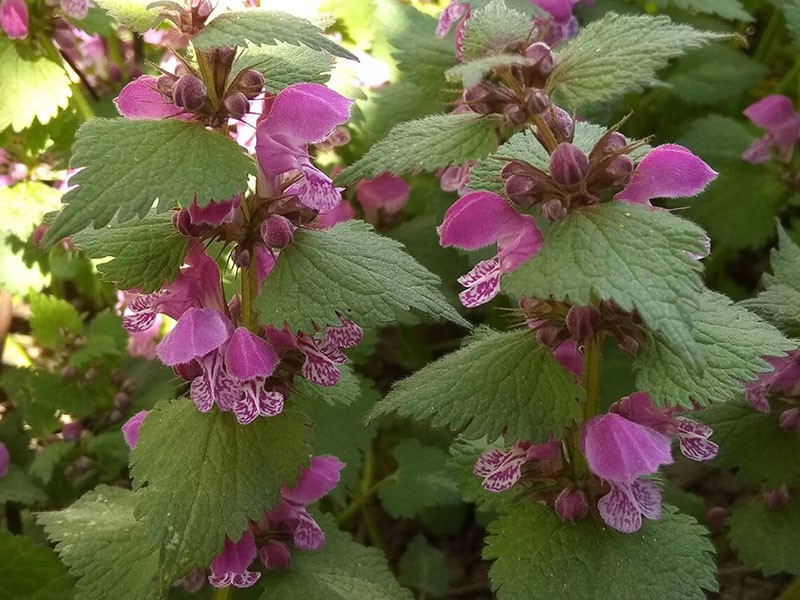 Lamb “Purpureum” grows to about 15-20 cm. People call it red nettle, although it has rich green foliage. In the summer season, a lush carpet is decorated with lilac or pink pretentious inflorescences.. 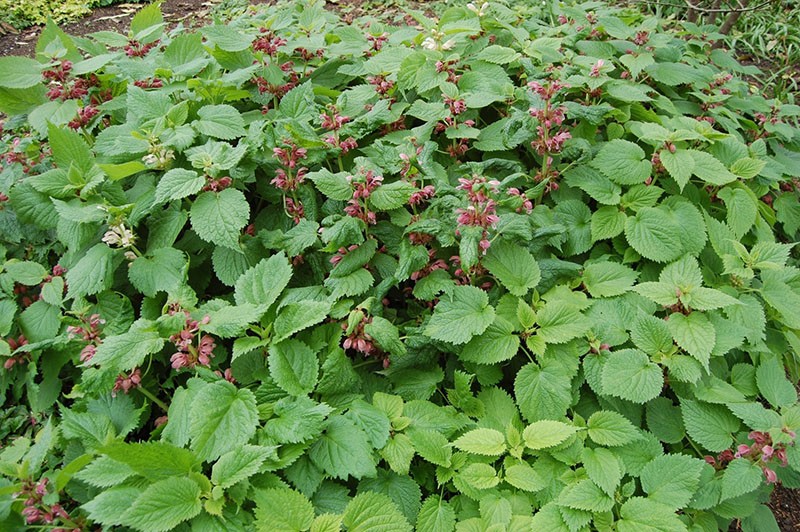 The orval variety has a compact structure. Grows up to 40 cm in height. Differs in special frost resistance. The buds are colored purple or pink. Appear on the grass in late spring and decorate it for 2 months (May, June).

Secrets of growing crops on the site 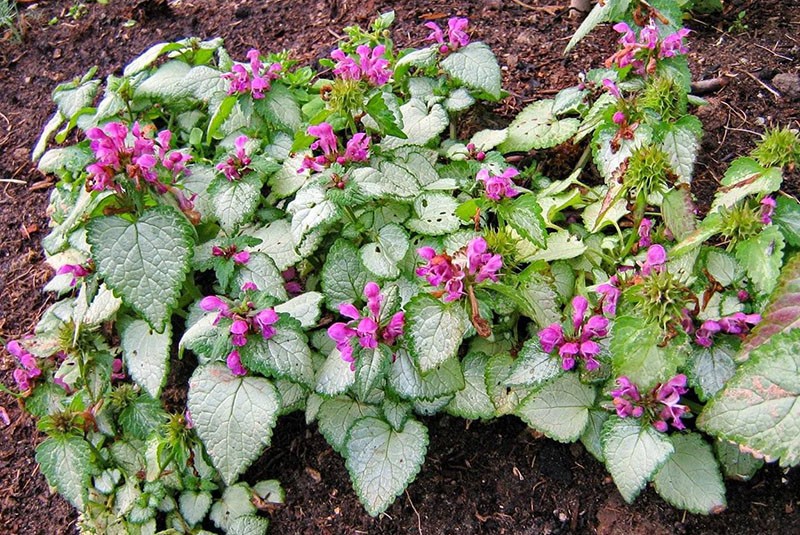 Uninformed summer residents often mistake the plant for an annoying weed. However, thanks to the competent planting of the lash and the care for it, designers get quite stylish platforms. The first step is to choose a suitable type of soil for her, containing an abundance of nutrients. Sandy loamy, loamy soil of neutral acidity is suitable. In a relatively poor soil, it is advisable to add humus. When choosing a place, take into account that the culture does not like too open areas. Therefore, it is planted in the shaded part of the estate..

It is advisable not to place the culture under the crowns of low trees so that additional moisture does not disrupt its development.

Reasonable approach to watering and feeding 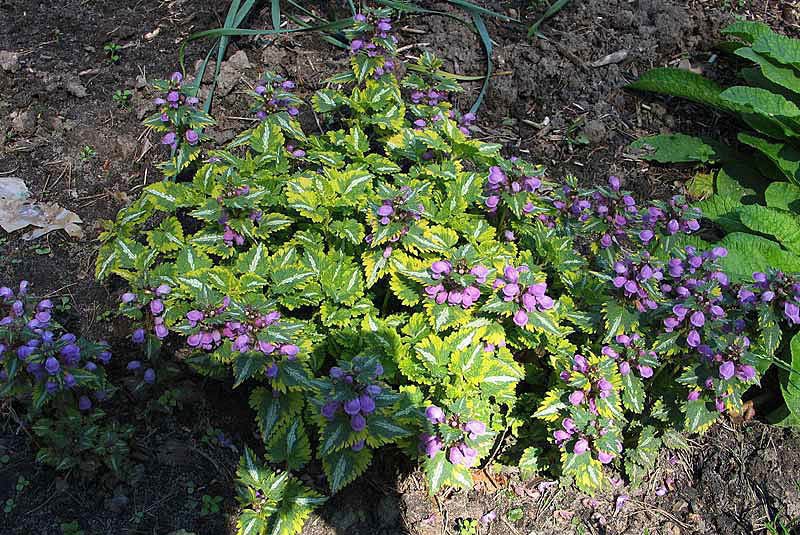 The lamb plant prefers a moderate amount of moisture. Due to its excess, the superficial root system suffers. It gradually begins to rot, which leads to the death of the grass. If there is enough rainfall in the summer, it does not need watering. In dry periods, the culture is regularly irrigated with life-giving liquid. Otherwise, the ground cover grass will lose a lot of leaf plates, and therefore its decorative effect..

Without additional fertilizers, the plant loses its attractiveness and decorative effect. To prevent this from happening, top dressing is regularly applied to the soil. In early spring, the lamb is watered with a solution containing a complete mineral complex. It is prepared according to the instructions on the package. The next dose is applied before the onset of lush flowering. Compost is used for business. Thanks to this, the grass develops wonderfully, blooms magnificently and even bears fruit..

Too much nourished land stimulates the growth of lamb. In a short time, she is able to “strangle” garden crops growing in her path. 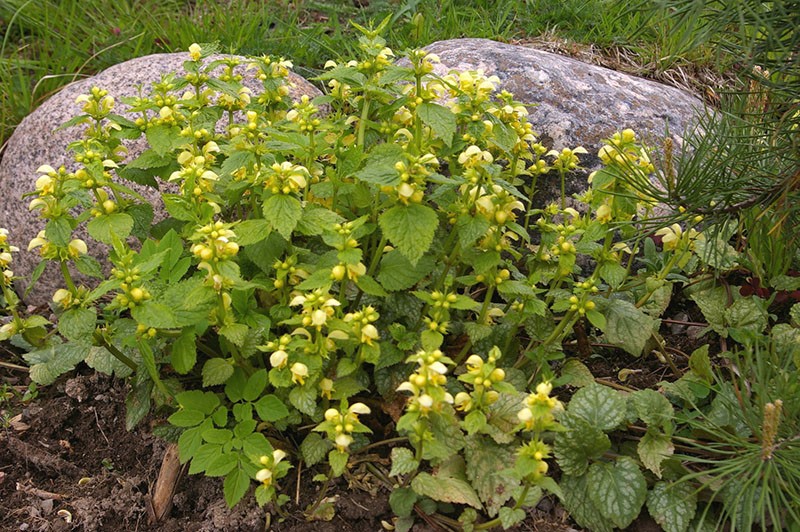 The plant is propagated by traditional methods.: 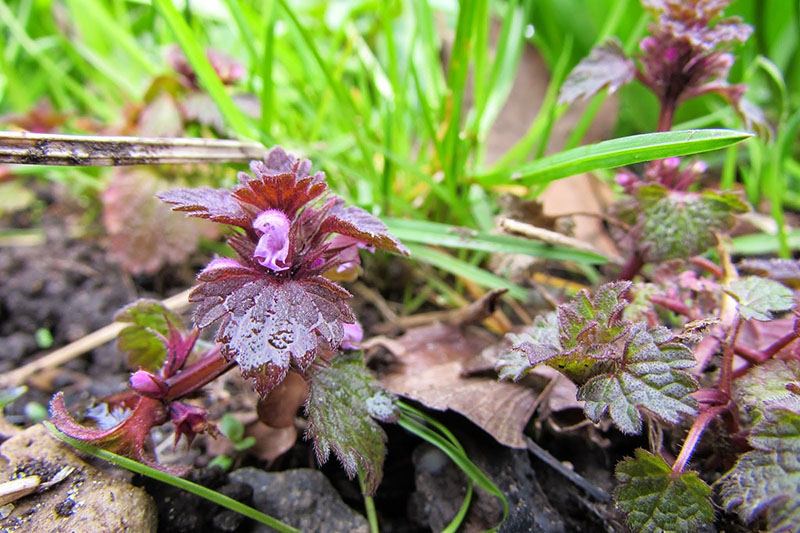 In early spring, seeds are sown in a prepared area. It is thoroughly loosened and the surface is leveled. Then the planting material is carefully scattered and lightly pressed with a rake. After about 1.5 months, seedlings appear. They are not afraid of spring frosts, therefore they develop wonderfully outdoors..

Yellow lamb is sown on the site in the fall.

Then they are immediately planted on a prepared bed using the following technology: 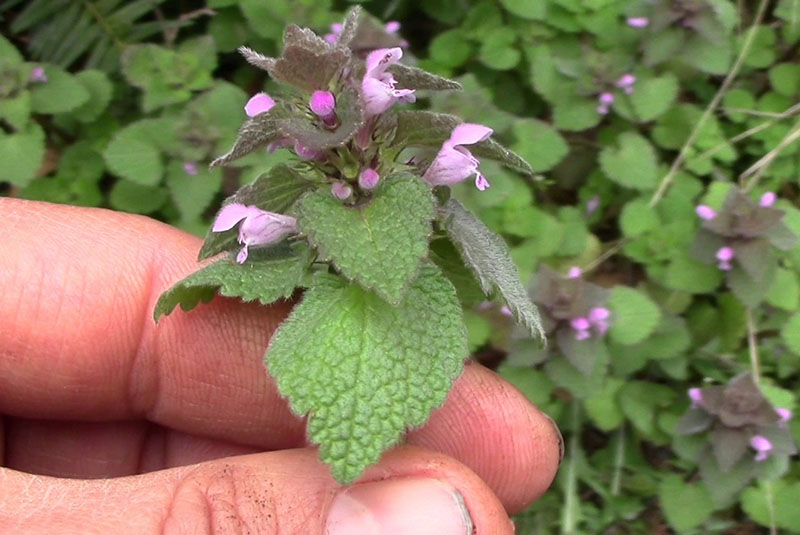 Usually, cuttings take root successfully on a new site. At the end of the season, a thick and lush grassy carpet appears on the site..

The easiest way to propagate a culture is to divide the bush. It is held in the spring. An adult plant is dug out of the soil, taking care not to damage the superficial root system. Then they divide it into several parts and plant it on a new site. In the same year, spongy buds will appear on young bushes..

The value of a nondescript plant 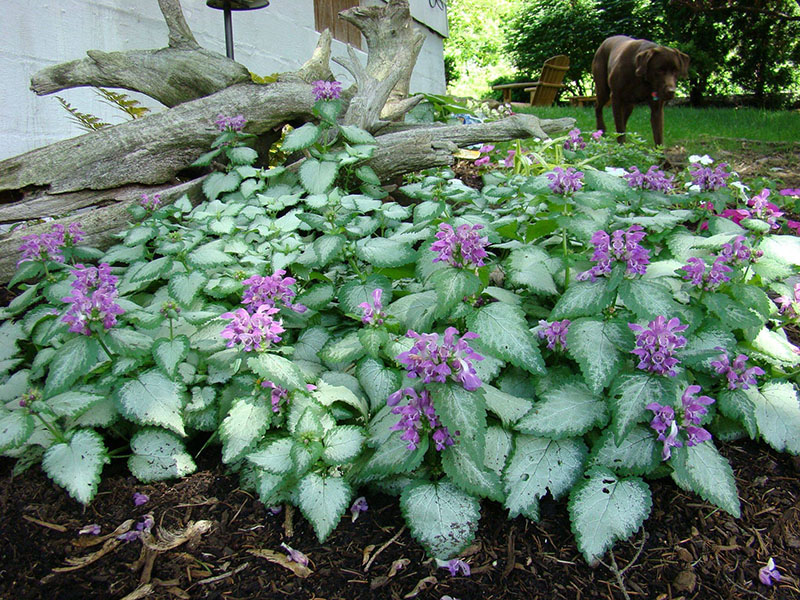 Traditional healers use the medicinal properties of clearcoat and contraindications in their “medical” practice. The components contained in it have a beneficial effect on the human body.

Prepare from the plant: 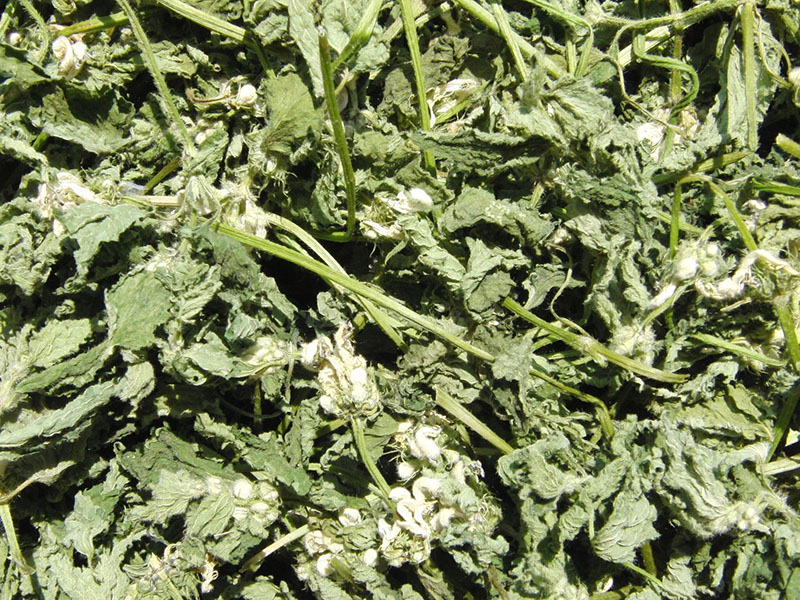 They are recommended to be taken as an expectorant for bronchitis and asthma. The drug promotes wound healing. Relieves toothache. Tinctures are prepared from speckled speckled for the treatment of kidneys, insomnia and female diseases. Thus, the use of the herb of lamb in traditional medicine is becoming more and more popular. However, do not forget about contraindications. The plant should not be used by those with increased blood clotting and pregnant women.

A detailed acquaintance with the clear is delightful. The plant has an attractive appearance. Able to decorate a lawn or a flower bed at a summer cottage. It is easy to care for and reproduce. And its medicinal properties help in the fight against ailments. Let’s try to grow this wonderful plant in our country house..

A plant for a flower bed in the shade – video