A visitor from Australia spherical craspedia will decorate your summer cottages 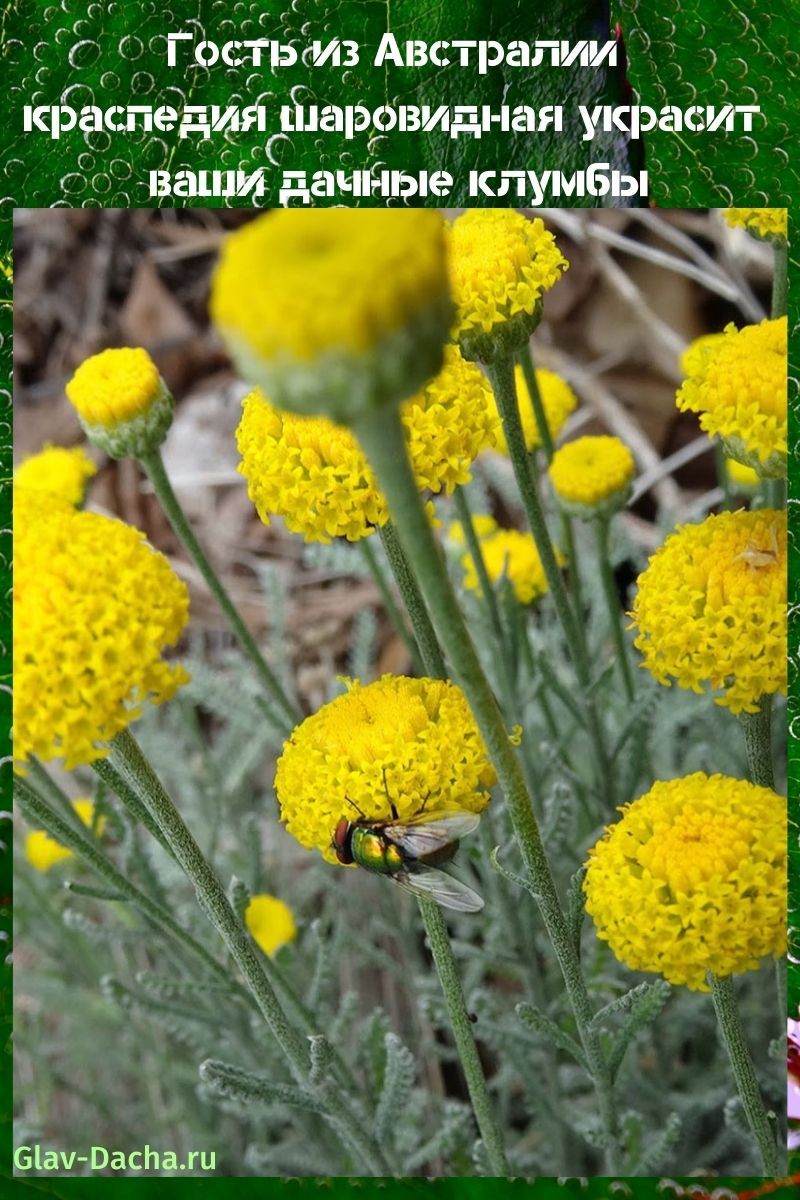 About 30 years ago, the spherical craspedia successfully left its “historical” habitat. Now it is found not only in Australia and nearby islands, but also on other continents. The plant is happily grown in summer cottages and is actively used to create flower arrangements. It is interesting to study the biological characteristics of the culture and the secret of its cultivation..

Description of the overseas guest 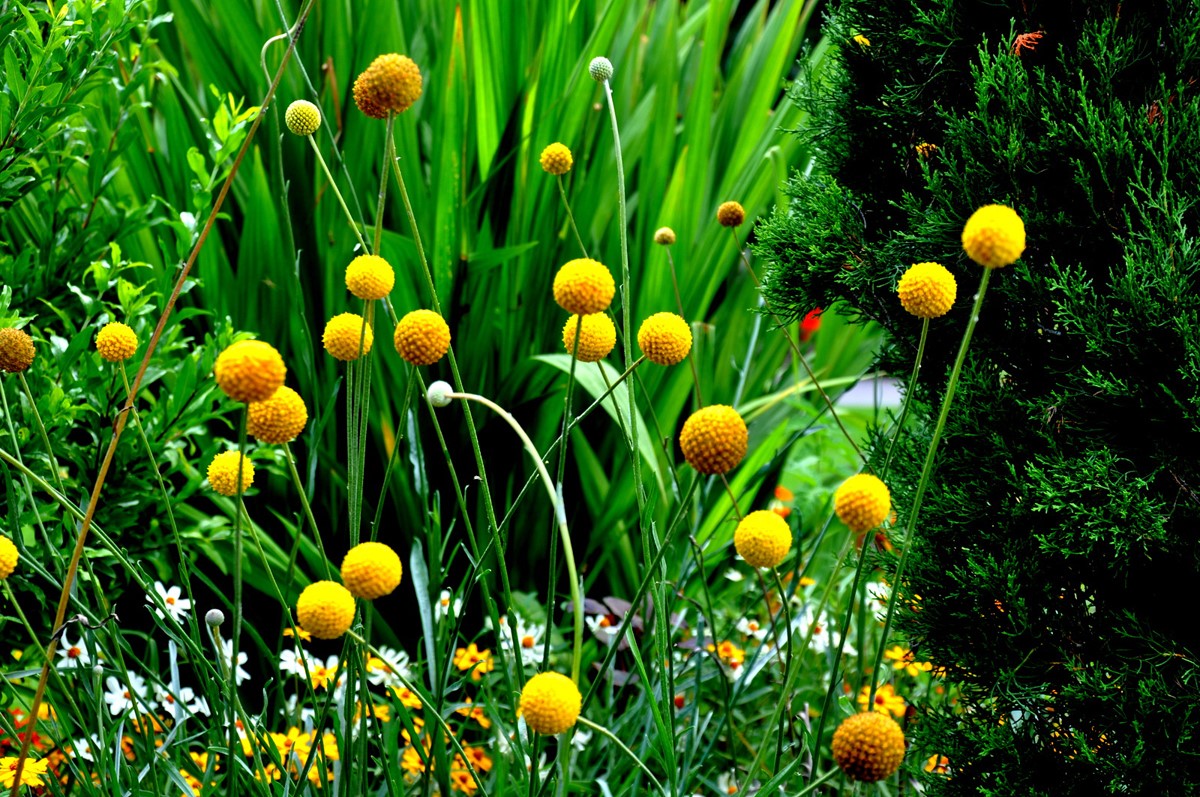 The spherical craspedia belongs to the “Astrovye” family. In its natural environment, it grows in damp lowlands, forest edges and sand dunes. The flower is also found on rocky slopes and hills. On the surface it is held by a rod rhizome with thick branches. 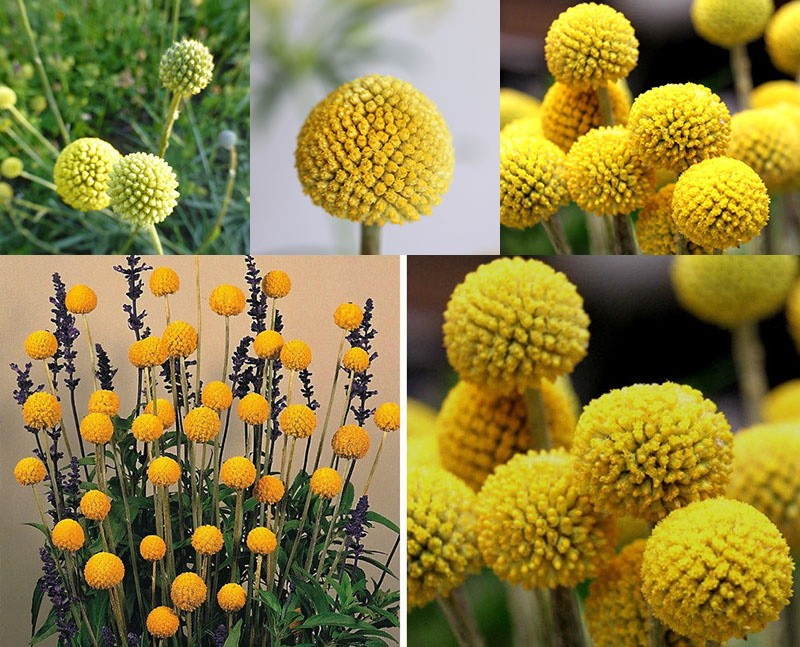 The most popular hybrid varieties of spherical craspedia are:

Due to the original shape of the buds, people call the flower “Drumsticks”, “Woolen Heads” or “Billy Buttons”. Translated into Russian, the word “craspedon” means “framing”. This indicates miniature bristles that gracefully surround the achenes of the buds..

In the root zone of the culture, elongated (like in cereals) leaf plates grow. They are covered with thick silvery-gray hairs. Dew drops linger on them, thanks to which the flowers survive during the summer heat and drought.. 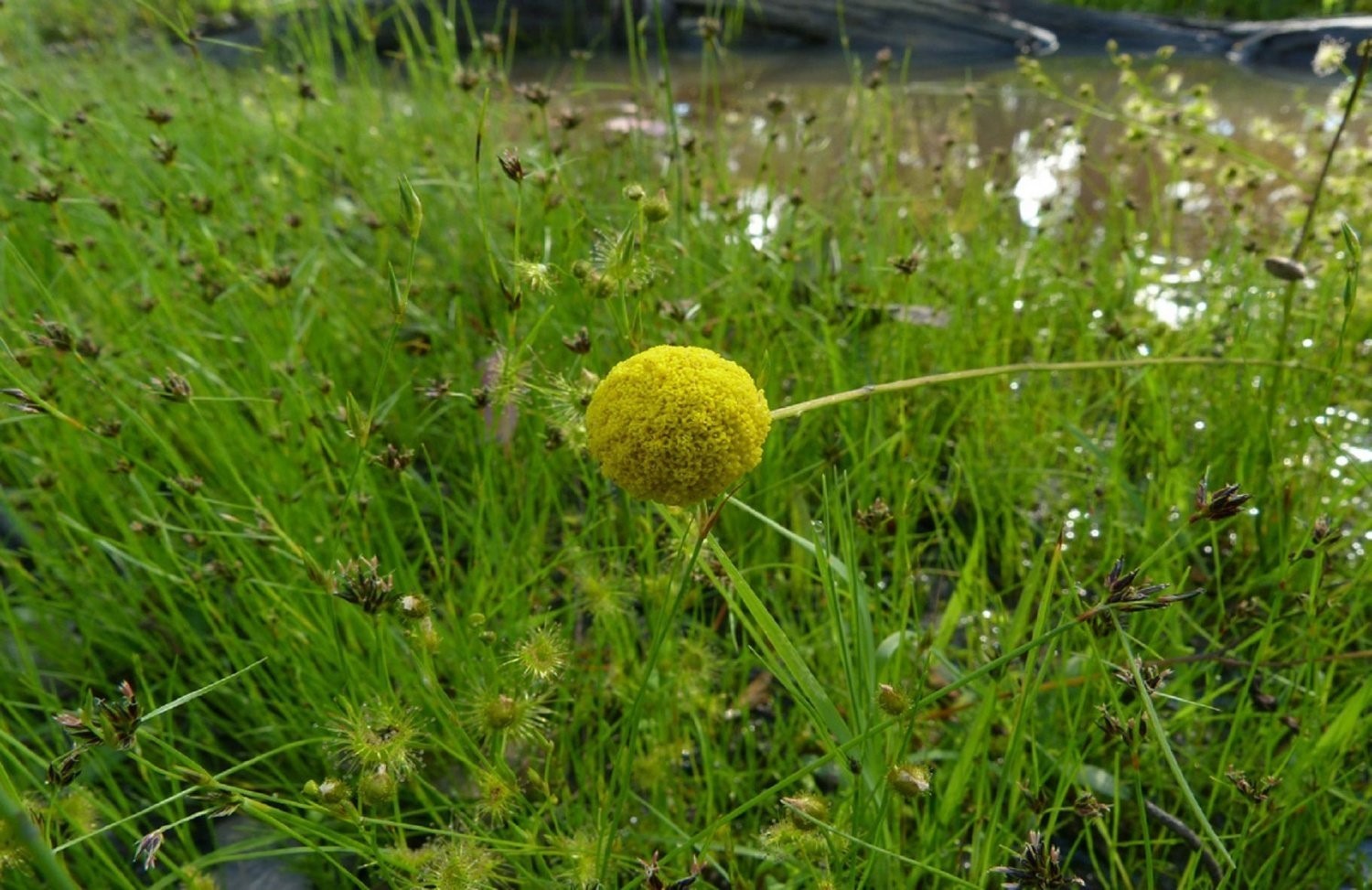 The capitate inflorescences of the spherical craspedia are located on the tops of the hollow stems. They consist of many tubular flowers. Each of them is decorated with a bent rim. Up to 200 small buds are collected in one head. From the side, they resemble the tips of drum sticks or tennis balls. Most often, the heads are colored in various shades of yellow. The plant blooms in late August and continues until mid-October. 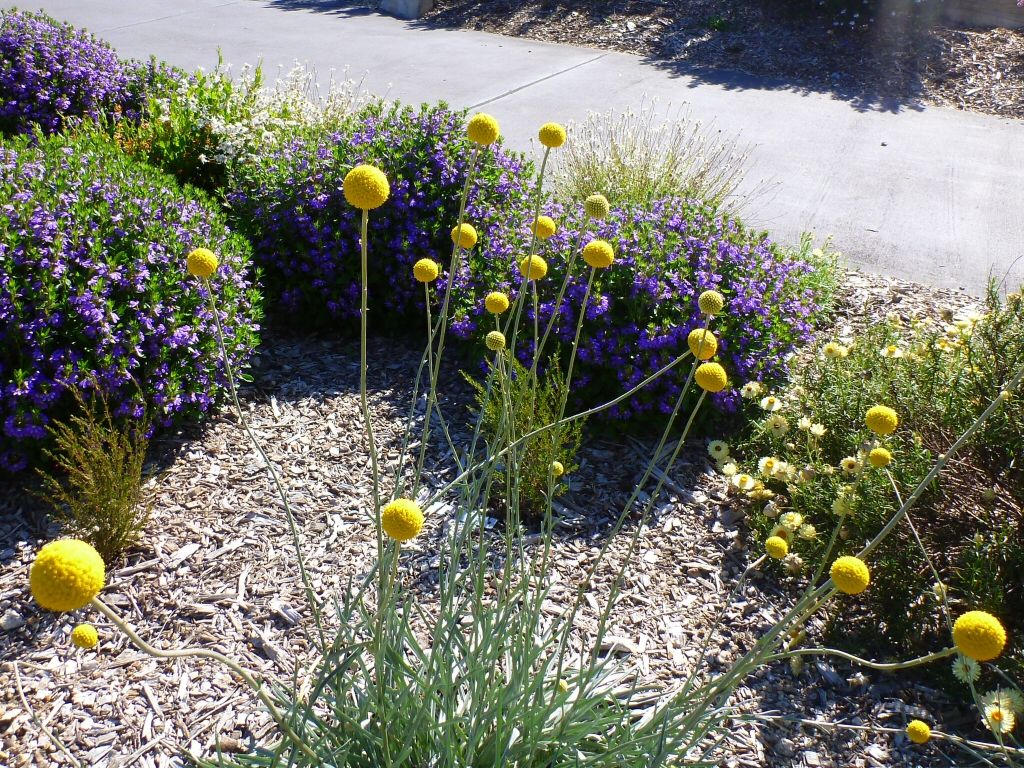 Even when dried, the buds retain their pristine beauty, which allows them to be used to create flower arrangements.

Spherical craspedia: the secrets of growing at their summer cottage 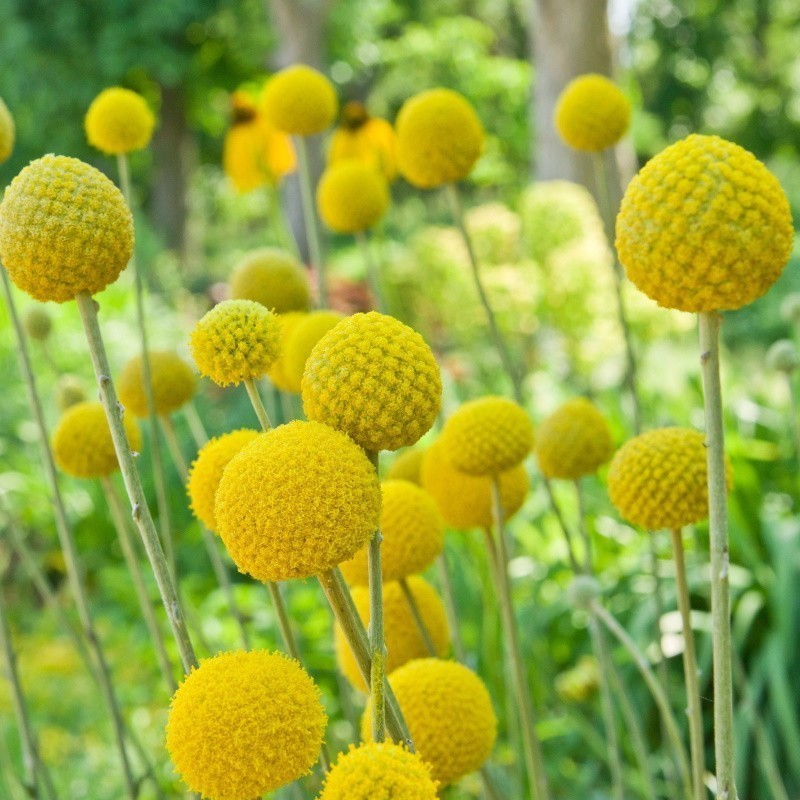 Often the plant is propagated using seeds or vegetatively. In regions with a cool climate, seedlings are grown first. Then the matured culture is transferred to a flower bed. For business use light peat soil or special peat cups. 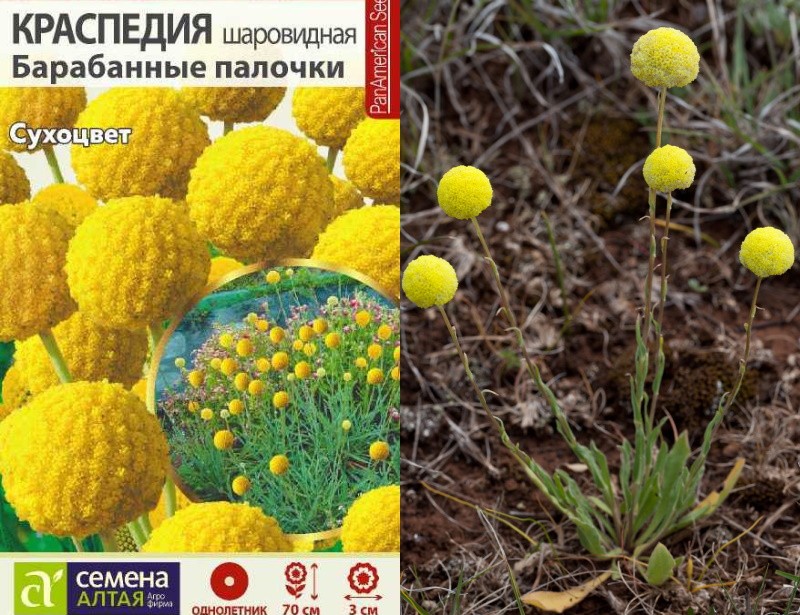 The process of growing craspedia from seeds consists of a number of simple steps.:

In the room where the flowers grow, they maintain a stable microclimate with a temperature of 20 to 22 ° C. In order for the plants to receive a fresh portion of oxygen, the film is removed every day for about 20 minutes. When sprouts appear in 2-3 weeks, the film is removed completely. Greens are regularly watered with a spray bottle. Sprouts, 5-6 cm high, are transplanted into separate pots and continue to water moderately.

If there is a lack of light, it is advisable to install a fluorescent lamp in the room..

After the onset of stable heat, they organize the planting of spherical craspedia on a flower bed. The first step is to choose a place where the sun’s rays freely fall. It should be away from drafts. Otherwise, gusty winds can lay the stems and buds on the ground, which will adversely affect their appearance..

On the territory of regions with a warm climate, spherical craspedia is grown as a perennial crop. There it is propagated in a vegetative way by dividing the bush..

The procedure is carried out in the fall, following a simple scheme:

Prepared bushes are planted in a flower bed in the traditional way. First, they dig up the soil. Make funnels. Plants are placed in them. Sprinkle with soil and watered. Before the onset of cold weather, cover with fallen leaves or pine needles.

Reproduction of craspedia by the spherical method of dividing the bush is permissible only for plants of three years of age.

Rules for caring for spherical craspedia 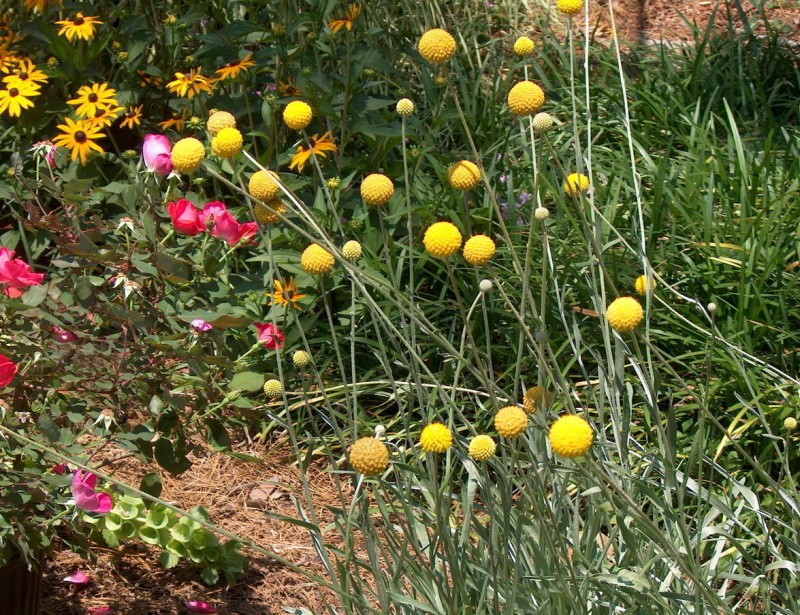 When a plant successfully takes root in a summer cottage, the “era of caring care” begins. It includes moderate watering, weeding, and winterization. Moisten the plant only with prolonged drought. Weeds are pulled out as they emerge to keep the bed looking stylish and attractive. In late autumn, plants are made from natural materials..

In northern latitudes, bushes can be transplanted into a pot and kept in a cool dry room, periodically watering.

The use of culture in landscape design and floristry 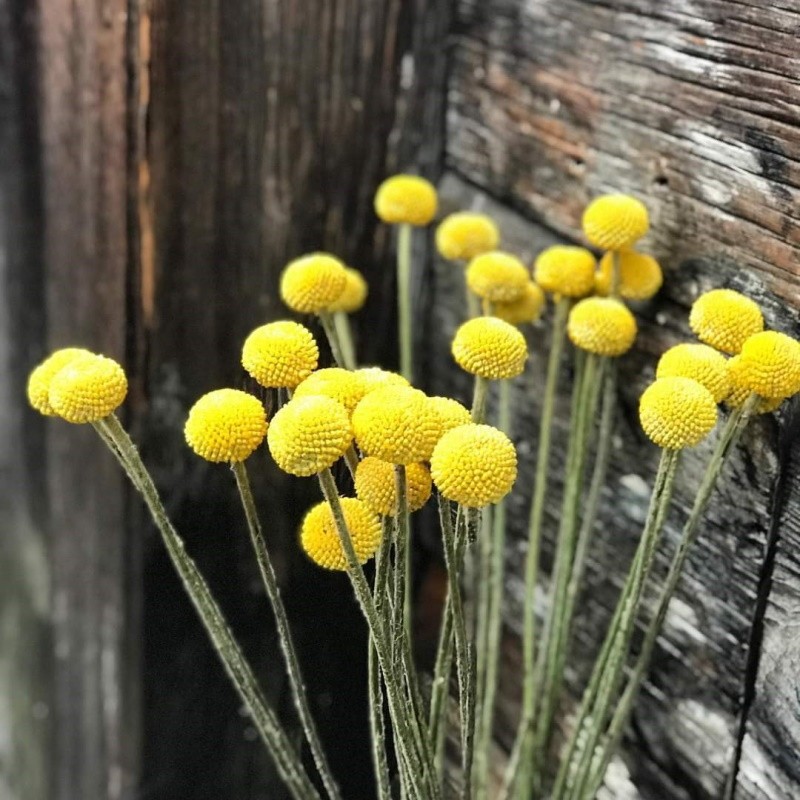 The spherical craspedia looks original on the alpine slides. Its capitate buds stand out vividly against the background of stones and lush greenery of other plants..

Excellent neighbors for a flower will be: 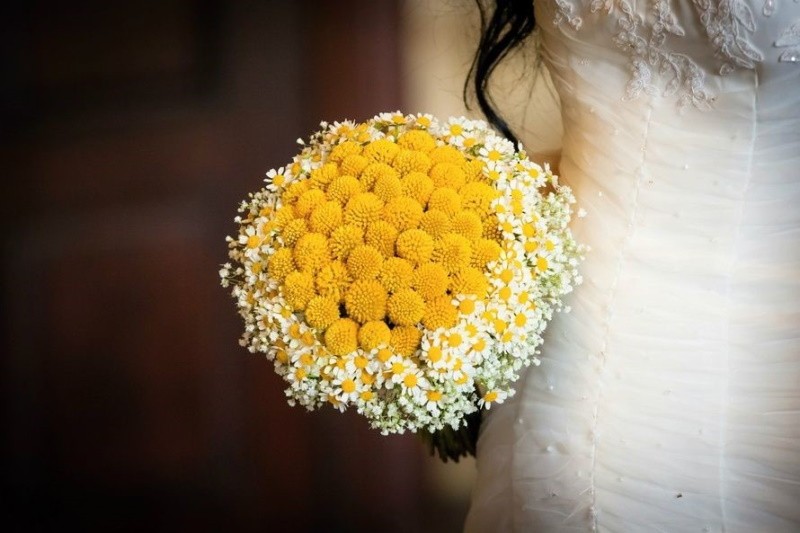 Florists actively use spherical craspedia in the formation of wedding compositions. Dried buds are used to create a florarium – an original element of the interior. It is made from a glass container. Seashells, sand, memorabilia and bright dried flowers of spherical craspedia are placed inside. If necessary, the color of the buds of the plants is changed with the help of spray paints. The result is a gorgeous decor element..

To dry the inflorescences, they are tied into bouquets and hung 15 pieces down, buds. Placed in a dry place with good ventilation.

An amazing plant – spherical craspedia can find a “refuge” in our garden. The main thing is to competently grow seedlings and plant a culture in an open, but protected from drafts, site. She does not need regular watering. Wonderfully endures the summer heat. Flowers are considered a great element of landscape design and flower arrangements..