Heard a lot about a beautiful houseplant called aucuba. Last year I was even lucky to see a huge bush with rich green leaves visiting a friend. Please tell us about the flower. I know that he also has a species with spotted leaves. What is it called? 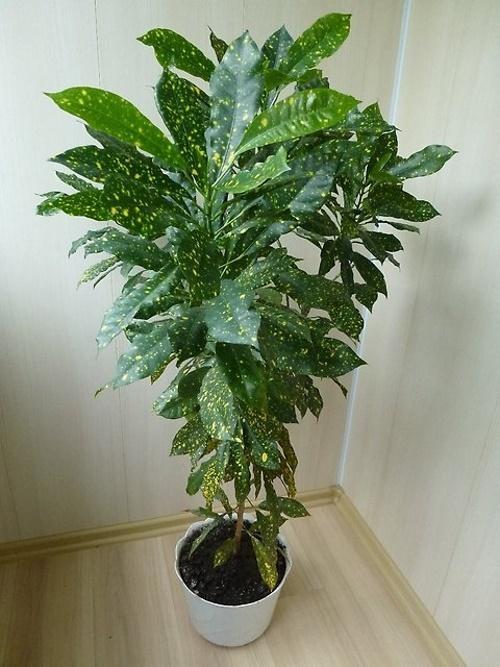 Among the ornamental-deciduous plants, the aucuba occupies one of the first places. Its chic dense leaves with a rich color adorn the bush all year round, and varieties with a golden pattern on the plates are rightfully called the “golden tree”. The homeland of the aucuba is East Asia, where it grows naturally in subtropical forests and mountain heights. However, the flower is no less popular in indoor floriculture and is widely used for landscaping premises..

Most breeders are confident that the aucuba belongs to the Garrieaceae family, although there is an opinion that it belongs to the dogwoods. Another group of scientists distinguishes the flower as a separate aucuba family..

Description of the species

Aucuba is an evergreen tree of quite decent size: in natural conditions, its height reaches 4 m, as an indoor culture it is usually limited to 2 m. Some species grow in spreading shrubs, and you cannot call them miniature either. The shoots of the plant branch well, the lower branches bend almost to the very soil. The bark on the branches is of a beautiful rich green color, old shoots have traces of fallen leaves at the points of attachment of the petioles, in addition, they are painted with red stains.

The lush crown consists of a large number of dense, elongated leaves. In the center, they seem to be slightly folded in half, the tips are pointed, along the edge of the sheet there are notches. The color of the leaves depends on the specific species: there are both monochromatic varieties and varriegated ones, with bright yellow spots of various sizes – from small dots to a large pattern.

At home, the aucuba almost does not bloom and does not bear fruit. In nature, in the middle of winter – at the beginning of spring, red panicles bloom on the bushes, then berries of the same color ripen in their place.

There are not very many varieties of aucuba, about a dozen, however, only two representatives are used as a houseplant: aucuba Himalayan and Japanese.

The Himalayan Aucuba is a lush shrub with long, narrow leaves. They can be either green or with small, sparsely spaced golden dots.. 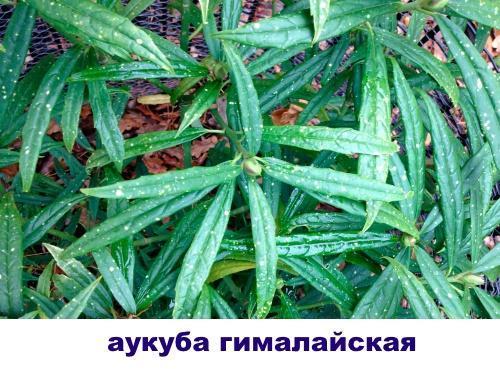 Aucuba japonica has more rounded, large leaves. It can grow as a tree, but it also lends itself well to forming. The color of the leaf plate depends on the varietal variety. Among the popular hybrids of the Japanese Aucuba, it is worth noting the following varieties:

Video on how to care for a room aucuba