Where the sundew lives: getting to know the predatory plants

Tell us where the sundew lives? For the first time I saw this plant at an exhibition, but I have never met it in nature. They say that they are different and you can even grow at home. Does the sundew have varieties? What they showed us grew as a small resemblance of a bush with narrow fleecy leaves. 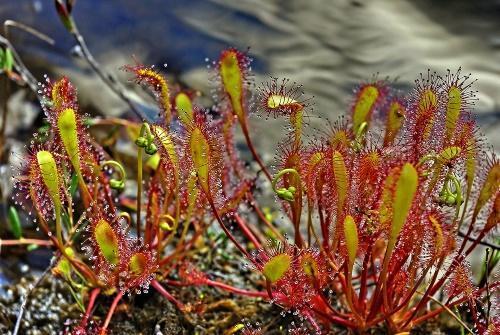 Sundew is the general name of the genus, which includes perennial grasses of the sundew family. Their feature is carnivorousness. Useful substances for plant development are obtained not from the soil, but by feeding on living insects. Such a diet is primarily due to the habitat of the sundew in natural conditions. What does this plant predator look like, and in what places does it grow? 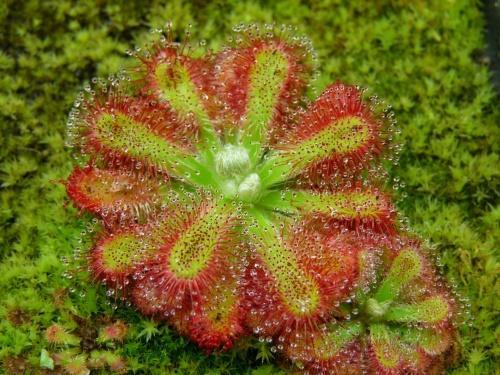 There are over 100 species of sundew and they are all perennials. Plants are a rosette of dense leaves, which can vary in size and shape. There are species with small leaves, no more than 5 mm, and in some, the plate size reaches 60 cm.The leaves themselves grow either directly from the rosette or on petioles, and can be rounded or oblong, narrow. However, all sundews are characterized by the presence of long reddish hairs on the leaves, on the tips of which drops of mucus glisten. It serves to get food: when the insect sits down, it sticks as a result. In this case, the leaf begins to roll up into a snail for digesting food. After a couple of days, when the digestive process is over, the leaf opens again, straightening.

The sundew rolls up the leaves only when living creatures sit on them. Falling drops of rain or foliage do not cause this effect.. 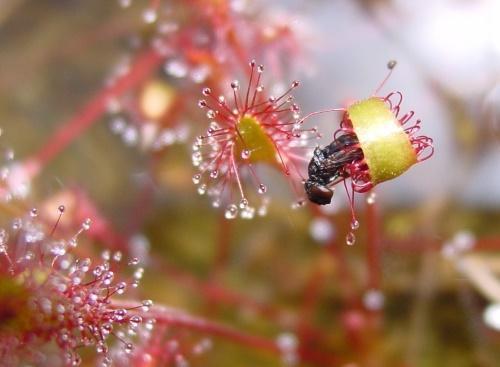 The sundews not only have original decorative leaves, but also bloom beautifully. All summer long, tall peduncles rise above the outlet, protecting pollinating insects from accidentally entering the predator’s menu. Inflorescences are small, with 5 petals, predominantly white or pink. 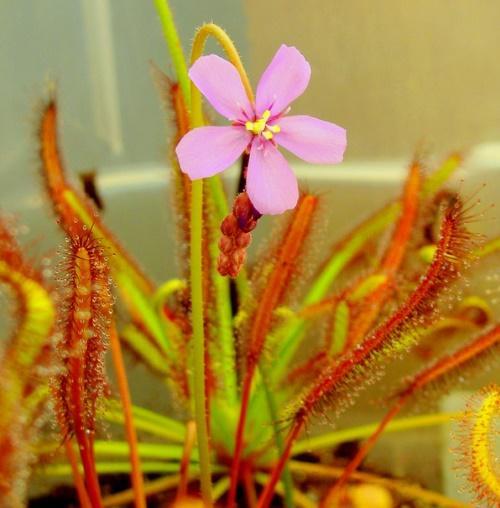 The most common sundews in the vastness of our homeland are:

Where the sundew lives? 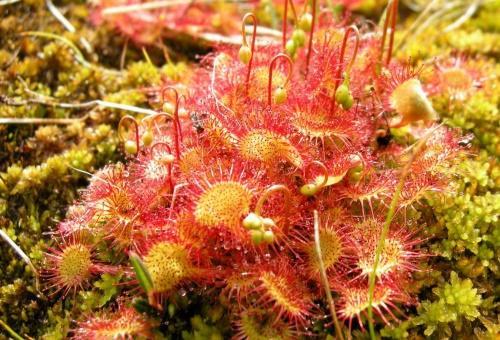 Probably, the sundew can be called one of the most unpretentious crops growing in their natural environment. Even more, she feels great where others would have died long ago. All the green predator needs is a wetland, diffused light and food in the form of insects.

Dewdrop can be found everywhere, perhaps, except for the southernmost latitudes of our planet, because their hot climate does not suit the plant. It lives mainly in peat and sphagnum bogs, less often on wet sandy soils. On the territory of our homeland, the predator grows in the Far East, Siberia and the European part of the country. Due to the drainage of swamps in some areas, it is included in the Red Book.

Video on where to look for a sundew