Derbennik Blash – simplicity and elegance in your flower bed

Tell us what Blush’s loosestrife is. I bought a bush in the market from some old woman, I just felt sorry for her. But the granny assured me that I would not regret it. When it grows, there will be a very beautiful pale pink carpet, and even small flowers, but there are many of them. In general, I “bought it”, but I forgot to ask how tall the bush will be and how to care for it. I have free space in the far front garden, but there is a small lake nearby. Not all my flowers like it here, but will the loosestrife grow by the water? 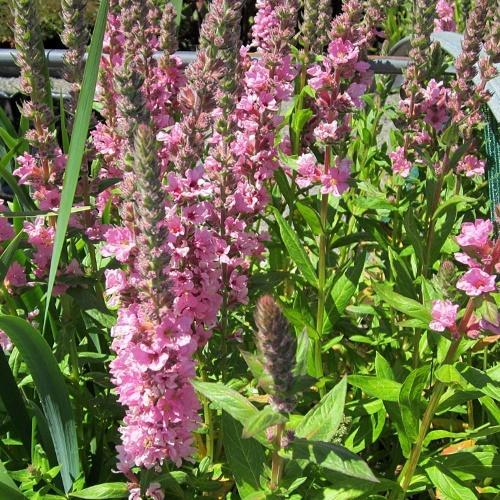 If you like simplicity and strive to preserve naturalness in a flower bed as much as possible, plant a Blush Loose. It does not differ in special decorative qualities. Against the noble austere beauty of garden roses and the chic flowering of dahlias, small loosestrife inflorescences lose. However, there is some kind of special, gentle charm in them. Maybe it’s a shy pinkish color, or maybe thanks to stuffed candles – flower stalks, this plant is increasingly found in gardens. Again, unlike roses, the loosestrife has an unpretentious character. He is not picky about care, he is not afraid of winter and wet soil.

The loosestrife is known as “weeping grass”. With an excess of moisture in the soil, the plant gets rid of it, secreting liquid. Water droplets run down the leaves and resemble tears. 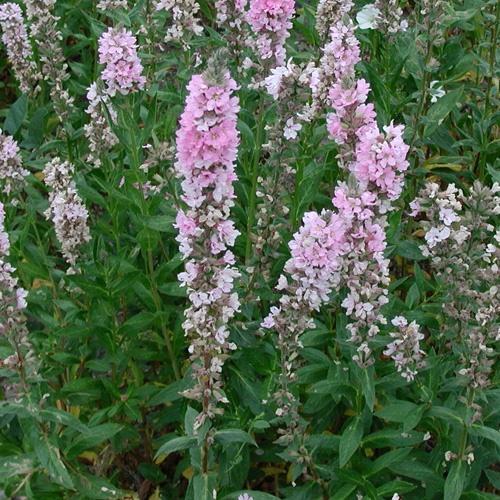 Blush is one of the willow loosestrife varieties that can often be found on river banks or wet meadows. It is an unpretentious perennial, one of the tallest varieties. The height of the bush can reach 1.2 m. It forms a tall stem, covered with many elongated leaves with a lanceolate leaf plate. The root system is well developed and creeping, but superficial. Moreover, with age, the old roots become coarse, and you simply won’t be able to pull out the bush with your hands..

In the spring-summer period, the foliage of the loosestrife is green, with the arrival of autumn it turns red.

At the beginning of summer, the bush produces a tall peduncle, densely covered with small, star-like, light pink flowers. A densely stuffed ear rises above the flower bed like a candle. In a group planting, the flowering of the loosestrife only benefits, creating a whole pink sea of ​​such candles. They replace each other, and flowering lasts until autumn.

In addition to its decorative properties, the loosestrife is also an excellent honey plant. It is often sown near the apiary to obtain an almost transparent fragrant honey with a slight tart note..

Growing and caring for a loosestrife in the garden 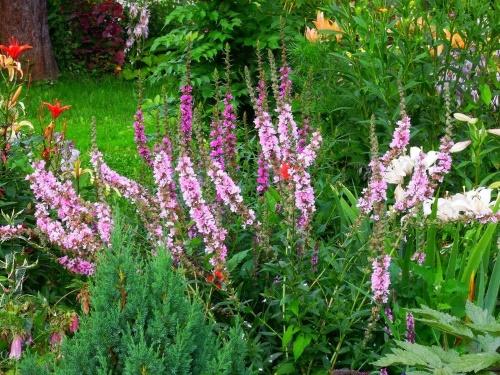 The simplicity and subtle beauty of culture are not all of its advantages. The loosestrider will be able to survive on any soil and in any place. But in order for the flowering to be abundant and long-lasting, it is necessary to find a sunny place for it, preferably by the water. Seeds can be sown for seedlings in March or directly into open ground in May..

In addition to the seed propagation method, new bushes can be obtained by cuttings and dividing the bush. It is better to take cuttings at the beginning of summer by cutting off a branch at the root. A rooted cutting can be planted in a permanent place at the beginning of autumn. But it is desirable to divide only young bushes. Older specimens have strong woody roots that are difficult to break.