Solar bloom of hybrid goldenrod and its popular varieties

In the summer, beautiful and rather tall bushes with yellow panicles bloomed at the neighbors in the country, I learned that this is a hybrid goldenrod. I liked them very much, but I would like the plants to be smaller. Tell me if this species has more compact varieties? 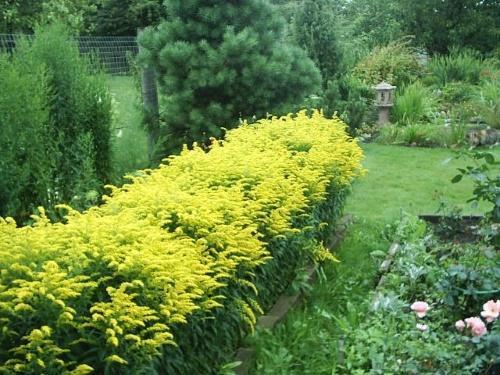 Among garden crops, unpretentious herbaceous plants occupy a special place – once having planted such flowers on the site, you can admire them for many years. Hybrid goldenrod is no exception. In addition to a beautiful and bright flowering, it grows quickly and multiplies quickly on its own, besides, it also has medicinal properties..

Fragrant inflorescences are widely used in folk medicine, not only for the treatment of people, but also for animals, for example, in case of stomach diseases, the herb has an astringent effect..

Goldenrod belongs to the Aster family and grows as a bush. Shoots are most often tall and single, very few branches. They have a fairly strong structure and are covered with a kind of deep green or reddish bark. The leaves are elongated; there may be depressions along the edge of the leaf plate. It is noteworthy that the upper leaves are smaller than those growing at the bottom of the stem. The perennial blooms with beautiful lemon-yellow inflorescences, from late spring to autumn.

The rhizome of goldenrod goes deep into the soil, firmly fixing itself on the site, moreover, it quickly multiplies by self-seeding and expands its possession, which should be taken into account when planting grass. It is better to give the plant a separate area where it will not stun other flowers..

The hybrid goldenrod is one of the most beloved species among gardeners for its luxurious leaves and flowers. Breeders have created many varieties of this perennial, differing in the size of the bushes, the timing and forms of flowering. Among them are the following hybrids:

Video about the beneficial properties of goldenrod